The lives being lost, homes being destroyed and nightmare being lived in Ukraine are dominating all our thoughts. Even when the TV/radio is off it’s hard to think about anything else. And rightly so given how immediate and existential the dangers are.

The implications for UK households are tiny in comparison, but substantial nonetheless. The economics of 2022 were already looking hugely uncertain – how high will inflation go, and how will wages and central banks respond? That uncertainty now has rocket boosters, but the direction is emerging. Inflation up substantially, and interest rates expectations down slightly – as petrol prices soar but war does some of central banks’ job of slowing the recovery for them. Living standards will shrink (we’ll be discussing how far on Tuesday), but the chances of the state doing so are reduced (even small state Conservatives want a bigger army now).

Everyone trying to navigate the war’s economic impacts means we could have all this week’s reads on Ukraine, but many would be swiftly out of date and you’re all consuming Ukraine news 24/7 anyway. So, we’ve focused reads elsewhere, while reserving this week’s chart for a reminder of Ukraine’s recent economic history.

Remaining retired. A big Covid legacy is older workers exiting the labour market. We know half a million more of those aged 50+ are neither in work nor looking for it, but we don’t know whether that’s a permanent or temporary thing. So good on the ONS for surveying those aged 50 to 70 who left work mid-pandemic. Six-in-ten say they won’t consider returning to work, with 79 per cent of those saying home/flexible working would make no difference. The results reinforce the lessons of history: once older workers have a period out of work, they are painfully unlikely to return despite the big hit to their retirement living standards. Those aged 50-65 in the survey are getting by via running down savings or private pension pots. Everyone calling on DWP to launch unspecified policy interventions to confront this challenge need to wrestle a bit more with that reality.

Scheduling shifts. Zero hours contracts work for some, but the instability they can introduce to family finances isn’t okay. Could policies limiting this problem help? A new paper examines the “Fair Workweek Ordinance” in Emeryville, California which required large retailers to provide workers with advanced notice of shifts, and compensate them for last-minute changes. Using daily surveys before and after the law’s introduction, they find that unpredictability did fall (success!). And while parents worked fewer days, they also worked more hours on other days, meaning that overall total earnings were left untouched (double success!). Unsurprisingly, worker wellbeing also improved. Anyone got a good reason why a salaried manager can currently cancel a shift for someone paid by the hour at zero notice in 21st Century Britain? Didn’t think so.

Happy (mortgage) holidays. Encouraging lenders to provide mortgage holidays was a part of policy makers’ pandemic response around the world – in the UK’s case for up to six months. A Bank of England staff working paper asks what impact this had. Households in financial distress were most likely to take payment holidays, but surprisingly a good chunk with stronger balance sheets did so too (a fifth of mortgagors applied for a holiday in 2020). Before you decide that means they didn’t work, note that the holidays helped households with less robust finances (low savings rates) maintain consumption – they consumed 20 per cent more than similar households not able to take a holiday. That’s a big deal. And those that took the holiday without really needing it? They increased their savings instead, which isn’t the end of the world. When the next crisis comes, mortgage holidays will be sitting in the toolkit (until house prices start falling).

Pandemic perspectives. Every post-pandemic op-ed says lockdowns have made many of us re-assess the type and volume of work we do. New research puts some analytical meat on the claim’s bones. It finds US workers reduced their desired work hours by almost five per cent. As this refers to late 2021, virus related fears would still be playing a role. But beyond those working in sectors with lots of social interactions, the authors also find evidence that everyone’s reservation wage (i.e. the wage required to make them want to work) had increased. Now this is US data, but it adds to the idea that the labour market across the pond was tight not just because demand was strong, but because labour supply was lukewarm.

Chinese creditors. Advanced economies spent big during the pandemic with minimal fiscal panics (thank you central banks). But we’ve seen a rise in debt stress among developing economies, and China’s international lending splurge of the 2010s – it’s now the largest creditor to some countries – means how they handle such situations really matters. The one-party state thing means we don’t know much about this crucial subject. So research trying to get a sense of what’s going on is worth your time. Lots is the answer, with more restructuring of Chinese debt than of that from the private sector or Paris Club lenders. When borrowers get into trouble, Chinese lenders are unwilling to write off debts – instead repeatedly rescheduling them. This is basically the old playbook that Western banks and countries used in the 80s/90s – then and now it means kicking the debt can down the road, and risks leaving poorer countries with a lasting debt overhang and weak growth.

Ukraine present and future look bleak. But its past was also a difficult one economically. This week’s chart highlights the decades of economic stagnation Ukrainians have suffered. When the Soviet Union collapsed, Ukraine was middle income by international standards – richer than its neighbour Poland and emerging Asian economies like Malaysia. In Eastern European countries, and ex-Soviet states generally, the late 80s/early 90s saw major economic damage. But while Poland’s economic output per person has more than trebled over the decades that followed – overtaking Russia in the process – and Malaysia’s more than doubled, Ukraine has completed stagnated. Last year, the Russian, Polish and Malaysian economies produced twice as much per person as Ukraine. It turns out that being sandwiched between the EU and Russia, without a clear orientation towards either, or the oil/gas propping up the Russian economy, is a deeply uncomfortable place to be economically as well as militarily. Whatever happens in this war, everyone had better resolve to make Ukraine’s future better than its dreadful present and disappointing past. 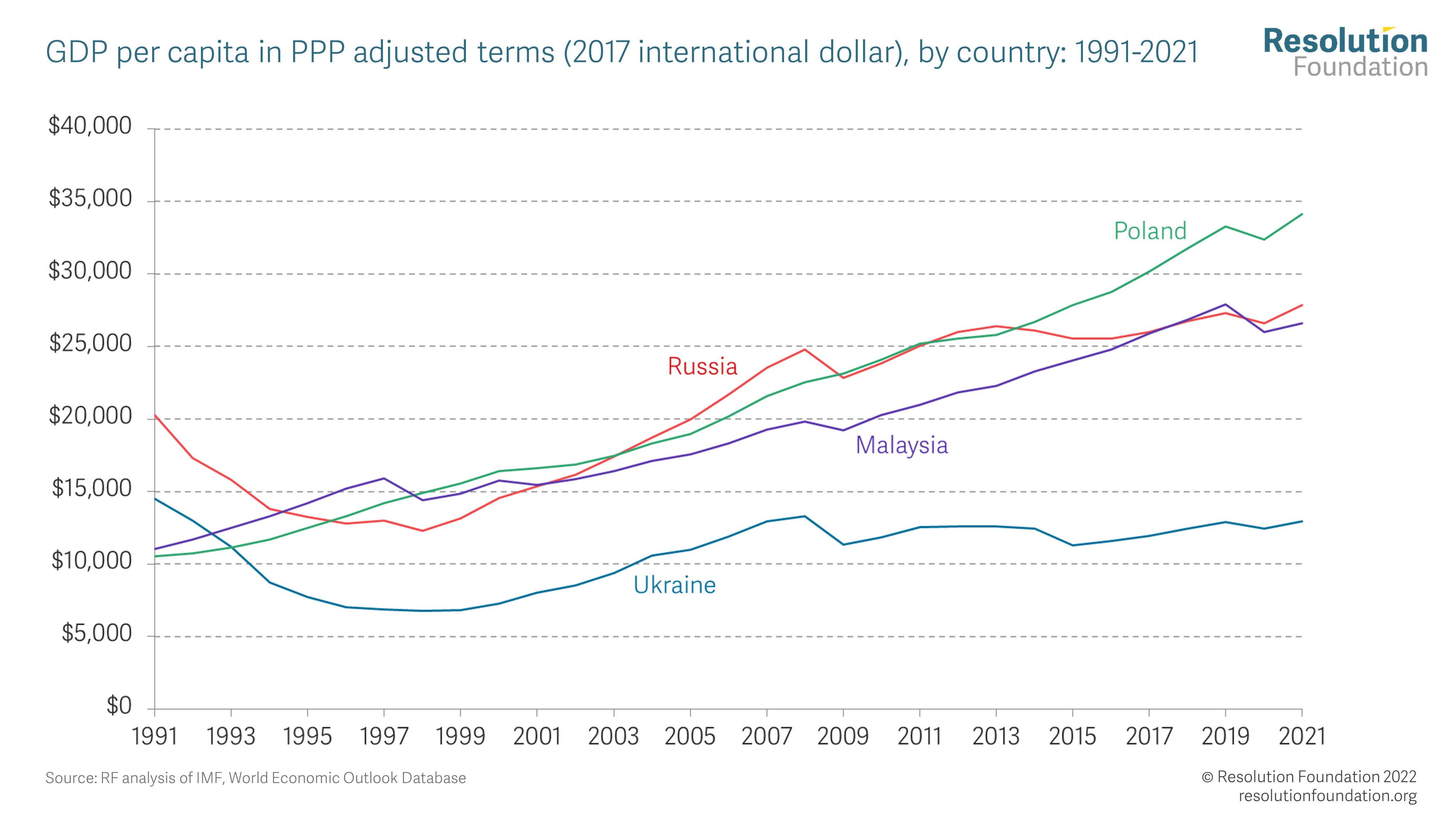