You know what the police need? Some economists. The Met have apparently spent £460,000 on their partygate investigation (to bring in fines of £12,600) – god knows how, given the British press did the evidence gathering for them. How much can it cost to show a suspect the front page of the Mirror and ask them to confirm they’re the one in the bottom left with the cheese straw?

While it was surging cases getting in the way of (legal) parties mid-pandemic, it’s surging prices dampening the party mood right now – today’s consumer confidence data is an absolute shocker (see COTW). I don’t want to sound like an old man, but they don’t make recoveries like they used to… I swear the feel good boom bit used to last longer than a few months. Luckily, the benefit to your brains of this week’s reads will luckily outlast any economic ups and downs.

Lastly, a quick favour to ask. When you get five minutes free from worrying about rising bills this weekend, could you ponder whether you know anyone who might benefit from our (paid) training programme this Summer/Autumn? It’s open to two heavily underrepresented groups in economic policy making: ethnic minorities and those with a disability.

Purchasing power. The last decade has seen a resurgence in research on market power of large firms – partly reflecting the impact of globalisation/tech in enabling superstar firms (i.e. a small number of companies winning large market shares). Key worries include that huge firms harm customers or workers (via higher prices and lower wages respectively). But could they harm us as citizens – by giving money a bigger role in our politics? Yes argues a fascinating paper (free version). First, it shows that firms in concentrated markets spend more on lobbying, and second that after firms merge they increase their expenditure on lobbying (by $65k to $103k on average). This makes sense: dominant firms have more incentive to lobby for changes that benefit their industry – they get to keep more of the gains and competition won’t erode the benefits. Competition matters for politics, not just pricing.

Striking students. ‘Does Greta Thunberg matter?’ asks a new German study – or more specifically, did loads of kids skipping school on Fridays to protest climate inaction have any real impact on politics? Yep is the bad news for frothy mouthed climate sceptic columnists. The big picture conclusion is that protests in an area did alter the political landscape, with more Green Party votes following (the Greens are now in the German government). What were the mechanisms? More coverage of environmental issues and parents taking on their kids’ environmental angsts. This is obviously a disgraceful reversal of the historical norm – when I was a kid, the fields were green and it was parents handing down political views to their kids.

Harmful harassment. The House of Commons Creeps means that sexual harassment at work is back in the news. But it’s not just Parliament where a disproportionately male workplace results in a high risk of harassment for women. Impressive/depressing Swedish research notes that women overall face triple the workplace harassment that men do with the risk increasing the more male-dominated the workplace. Similarly, men are more likely to face harassment in strongly female-dominated workplaces (where they are more likely to be harassed than women). This reality affects who chooses to work where, with both genders being deterred from applying for roles where they will be in the minority. With female-dominated workplaces generally being lower-paying this means harassment reinforces gender pay gaps. Women who have experienced harassment are particularly likely to switch to workplaces with more women… and lower pay.

Bank bashing. Bank of England bashing, on the grounds that their forecasts significantly underestimated our inflation woes, is all the rage. Especially if you’re a current politician or ex-member of Bank staff. To gain some light relief/sympathy for forecasters, have a listen to Michael – the Big Short – Lewis’ podcast on the role of experts who deal in probabilities (i.e. economic or meteorological forecasters). It discusses how such experts have got better over time… and yet still get even more grief.

Democratic deals. Optimism about the spread of democracy has fallen a long way since the hubris of the 1990. But maybe the gloom is overdone – because economic integration can help foster change in non-democratic parts of the world concludes a new paper. The authors exploit changes in the cost of air transport to measure the variation in global trade links. They find that those growing up in a country more integrated with a democracy are more pro-democracy – and that the country itself becomes more democratic over time. Good news (for us rather than China/Russia) on the long game front comes from the fact that these effects aren’t about openness to the world per se – when a country become more integrated with non-democratic partners there are no impacts on attitudes or its institutions.

We had the latest retail sales data out this morning – they were up 1.4 per cent in April. Before you decide the cost of living crisis has gone away note that sales fell significantly in March and rising sales are particularly visible for shop bought booze – are people respond to financial pressures by partying at home/not going out? That would be consistent with truly catastrophic consumer confidence figures this morning. But something else also caught our eye in those retail sales stats. As our Chart of the Week shows, internet sales were turbo-charged during lockdowns. But has Covid really driven a total transformation of our shopping habits? Far less than many claim. That’s not because online sales haven’t risen well above pre-pandemic levels (although they’ve fallen back loads as the economy reopened) but because that rise was happening anyway… The share of sales being done online is now not that far above where we’d have expected it to be had Covid never turned up and the pre-pandemic trend just continued. This doesn’t mean our high streets aren’t struggling – – but it’s important in understanding why. 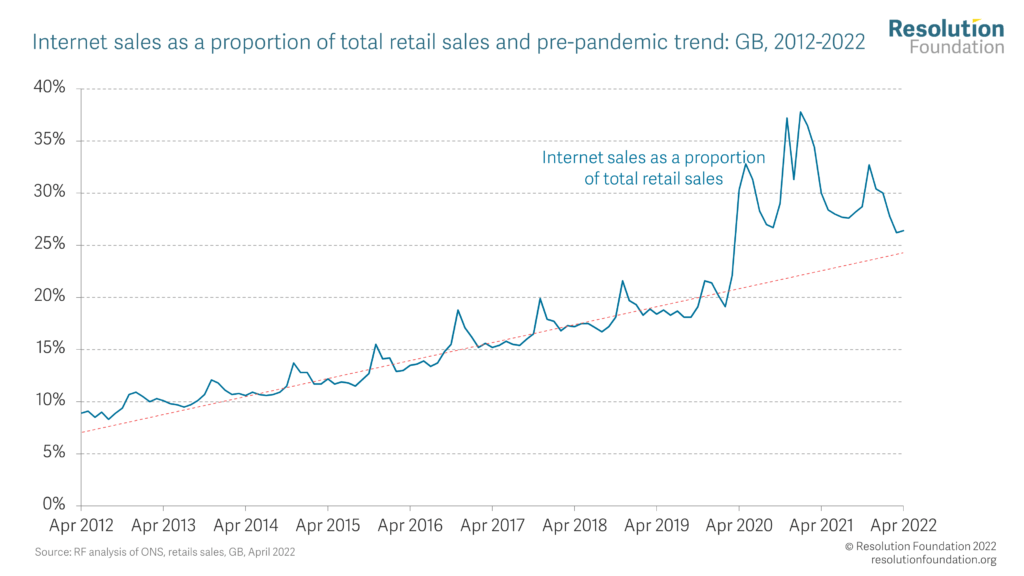