Temperatures are on the up. So are interest rates. 2022 is all about monetary policy climate change sweeping advanced economies, with the Bank of England’s fourth hike in a row yesterday taking us to the heady heights of 1 per cent. I know we’re all desensitised to high inflation chat, but if their forecast for double digit price rises becomes reality it’s a catastrophe. To perk us all up the Governor’s message is that if things go really well we might avoid a technical recession. Which is nice. Even in that world we won’t avoid our incomes getting absolutely hammered – we’re talking a drop this year of £1,200 per household.

Cost of living trauma plus partygate mean Conservative support in the local elections is a long way from the enthusiasm of 2019 – Labour will win in national vote share terms and first past the post means the Tory vote falling does a lot of what they need. But “none of the above” is part of the message, with Labour’s London success combined with falling back slightly in the north and midlands (vs 2018). Who likes a none of the above election? The yellow chameleons Lib Dems, whose geographically spread rebuilding as the higher income party continues.

The real winners of course are you, who get some great weekend reads and a COTW that, 25 years on from the 1997 election, tries to explain why arguments about whether New Labour was a triumph or neoliberal disaster aren’t going away any time soon.

Harmonious households. Social security exists to insure people against some of the risks that a market economy (and life) pose to us all – including unemployment benefits to limit income falls when we lose a job. We know that protects living standards/consumption during spells of unemployment, but it also reduces some of the wider impacts on families shows a study examining different levels of support across US states. Men losing their jobs significantly increases the risk of divorce, but a $100 higher unemployment benefit reduces the increased probability of divorce by 14 per cent. For women, job loss/benefit levels matter less for divorce – instead it’s all about having children. A more generous unemployment insurance mitigates the increase in the probability that a redundant woman has a child (the effect on men is the opposite i.e. job losses make them less likely to have a child). So, welfare policy matters for more than living standards, and women ≠ men when it comes to the effects of job losses.

Competitive country? The Competition and Markets Authority published their annual state of the nation report last week. It’s an impressive smorgasbord of data about how competitive and dynamic our markets are (less impressive is the chart design but I’m slowly getting over it…). On most headline measures there’s bad news – markets are more concentrated (i.e. big firms have more market share) and firms’ mark-ups are up this century. But that former result (which matches our own work) is put into some important context – once you take into account imports, the increase in concentration isn’t massive. If you look at one chart make it figure 7 – which was new to me. It shows that poorer consumers spend their money in markets that tend to be more concentrated than those serving richer households. The value poorer households place on being able to shop around to save money is something we heard loud and clear in some recent focus groups – come along to hear more next week.

Punishing promiscuity of women is something that many societies have a long and unfortunate history of – as part of the thousands of years of limiting female freedoms thing. Obviously that’s something a civilised country would never be so stupid as to double down on these days. But what might be the origins of such customs? Pastoralism (the form of subsistence focused on farmers travelling with grazing animals) is the answer from a great paper. Men in these societies, often away from their families and anxious about paternity certainty, had more incentive to restrict female freedoms than those elsewhere. Using a large survey across more than 100 countries, the author shows that historically more pastoral societies are more anti-abortion, engage in more genital mutilation, and are generally more likely to restrict female freedoms and mobility. In contrast places that farmed pigs/poultry (which don’t need taking to pasture) do less to restrict female sexual freedom. Definitely an eyeopener to the deep historical origins of our social norms. Obviously the US isn’t a subsistence level pastoral society, so god knows what their excuse is.

Learning liberally. You all know education increasingly predicts which side of the major political divides people stand on – with research largely showing this reflects different values among those with different levels of education. The very different vote patterns of those who did/didn’t go to university has been a particular focus. But is this because of what happens at university or who goes? That’s often hard to explicitly test, but new research on the UK does exactly that using a cohort study and finds that graduating from university does change people – they become less authoritarian and less racially prejudiced. But before Conservatives immediately conclude university is about lefty brainwashing, note that it also makes people more right wing on the economy. Overall I’d say this is good news – a more educated society will be a more tolerant one (even if not one that’s massively up for the higher taxes that are coming).

Problem prices. Since high inflation is in vogue, it’s worth a read of new research that shows that how you collect price data can impact how high you think they are. Focusing on anti-malarial drugs in Uganda, it compares three approaches for collecting price data: asking firms for their prices, using prices reported by customers and collecting prices via a mystery shopper (like the ONS does). Mystery shopper and customer reported prices roughly align (after accounting for them buying different things), but prices reported by vendors are almost 20 per cent lower. The reason is that what vendors stock isn’t the same as what they sell. This is obviously a very different context, but it’s related to the point Jack Monroe was making earlier this year – it doesn’t matter if Asda theoretically has cheap pasta in stock somewhere. What matters is the prices of what customers can actually get on the shelves.

Everyone loves an anniversary – although my own enthusiasm for them is being sorely tested by the marching bands practicing thoroughly for the Queen’s Jubilee outside Resolution HQ. The 25th anniversary of the 1997 election has Labour types rowing about whether that government achieved great things or was a neoliberal shower. I thought four fact filled charts might do more than that slanging match to help us learn the right lessons. Those noting that New Labour combined economic growth with progressive policy focus on the first half of Tony Blair’s time in office: incredibly strong and shared income growth (chart 1) were driven by wages, employment and benefits rising while housing costs did not (chart 3). So why do some look back at that government with less approval? Because (chart 2) from around 2003 things didn’t look as rosy (although at the time people didn’t notice because GDP and pensioner incomes were still growing). Wage growth slowed and housing costs surged (chart 4). Blair critics also point to the slow growth for poorer households – although this largely reflects data errors with benefit income being heavily under-reported. A better critique is that the top 1 per cent did very well through the 2000s. Obviously the banking crisis that followed tanked everyone’s incomes. While partisans in this debate pick and choose the evidence that suits them, the rest of us should just learn the broader lessons: economic growth matters, policies like higher benefits and a minimum wage made a real difference, but housing costs and the rise of the top 1 per cent were ignored for too long. 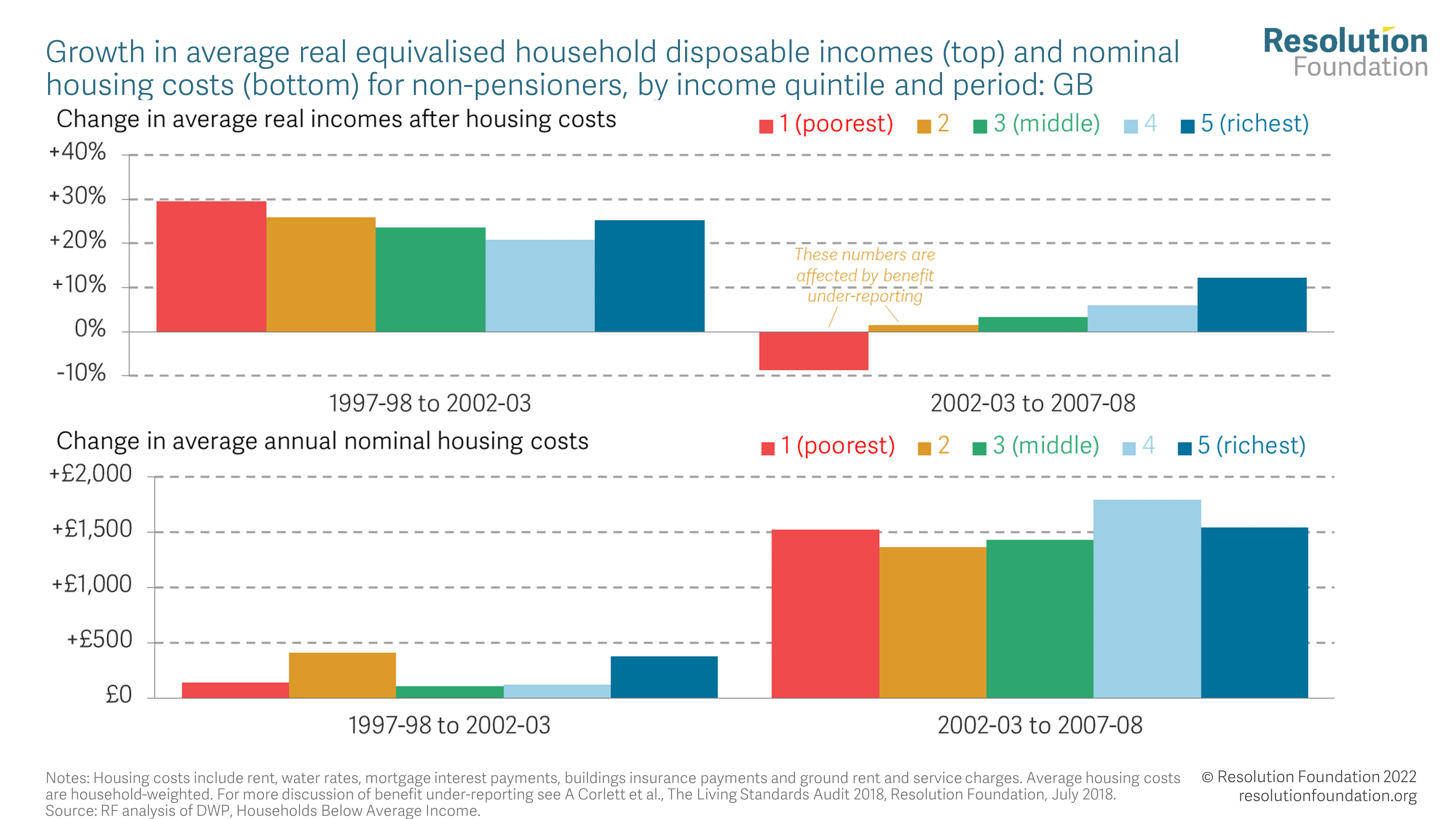