I’m afraid TOTCs is in rather gloomy mood today. I appreciate this isn’t what anyone wants to hear, but I really fear we’re only in the foothills of the economic bit of this crisis in so far as households are concerned. Even if the initial recovery phase is V-shaped for GDP, household incomes won’t be surging straight back up, having fallen significantly in lockdown (as our Living Standards Audit will show on Tuesday – tune in for the launch).

Partly that’s because I’m of the view that the job losses haven’t even started yet (the Job Retention Scheme (JRS) hasn’t just prevented covid-related redundancies, it appears to have delayed some normal redundancies too). And it’s also because policy will be doing a lot less cushioning of incomes as the JRS is phased out in October, and the temporary benefit increase expires next April. So, when I hear from some that surely the Chancellor’s done enough with totally unprecedented action to date, I’m understand the sentiment but I’m afraid the answer is no. We’ve only just begun.

Trade talks: The PM wants us all back commuting – so get your masks and your podcasts at the ready. This recent edition of Trade Talks is a good place to start, examining the opportunities and barriers for black workers in America throughout the 20th century. It ranges across the impact of the post-1940s Great Migration northwards of Black families (see previous TOTC) to the racially-differentiated impact of import competition from Japan, which contributed to a stalling of positive economic trends for black men during the late 1970s and early 1980s. Lots of economic history food for thought.

Workless refugees: In many countries (including ours), those seeking refugee status are banned from working. You can understand why governments keen to avoid their asylum systems being used for economic migration opt for this approach, but what impact does it have? A big one is the answer from new research examining ‘work bans’ across Europe from 1985 to 2012. Refugees facing a work ban had a 15 per cent lower likelihood of being in employment in the years following the ban, with these negative effects lasting up to ten years. And the impact isn’t just on the individuals concerned. The cost in terms of lost output from work bans in Europe during the 2015 refugee crisis? €37.6 billion.

Home schooling: …is the end of days. But also a disaster for inequality, as a new study (summary) illustrates admirably clearly. The paper examines Google searches for online learning resources over lockdown. Whose doing the googling? Those in wealthier urban areas. Every $10,000 in average household income increases searches by 15 per cent. The even more extreme form of education exclusion comes when you see that searches increased by 50 per cent for each 10 per cent increase in the proportion of households who had internet access and a computer. It’s almost like there’s a reason we’ve nationalised the educating our kids thing. Oh, and the digital divide matters. Who knew.

Infectious Trump: Holding campaign rallies during the middle of a global pandemic is pretty obviously a terrible idea. Which is why President Trump went right on ahead with one at the end of June in Tulsa. Even better he hosted the 6,000–12,000 attendees in an indoor arena. But this ridiculous idea didn’t actually result in an increase in coronavirus cases in Tulsa, or Oklahoma more widely, according to a new paper. The reason? Not because Trump supporters are brilliant at social distancing (although all the K-pop fans and teenagers on TikTok booking out hundreds of seats to reduce attendance must have helped), but because many restaurants and bars voluntarily closed while other citizens stayed at home and cancelled planned activities. Unfortunately, while Trump’s rallies aren’t causing more covid cases, his policies are (and so apparently is higher inequality, with more unequal US states seeing more deaths). The only saving grace is this nightmare might all be over come the autumn.

Mixing metaphors models: the odd thing about this crisis is that the economic pain isn’t caused by the usual economic policy failure (think bank regulation or exchange rate policy) but the path of a virus. So good economic policy choices inevitably rest on judgements about that path. We’ve previously made this point in calling for economic policy decisions to be made with the very real prospect of a second wave in mind, but economist Tony Yates isn’t content with that approach. In a new blog he calls for a new research institution to be set up to bring together expertise in economics and epidemiology to do a more rigorous job. It’s worth a thought.

We started with gloomy news, so let’s end with some more good news albeit on a very depressing topic. You’ll have seen the news today that Public Health England may have overstated our covid-death toll by including anyone who had covid and subsequently died in the count, even if they died of something unrelated. This might explain some of our bad performance vs other countries on this measure of deaths. Obviously it can’t explain our bad performance on the (better) excess deaths measure, but even there we have good news with our death rates back to normal since June (as COTW shows). Further good news comes from the snappily-titled “COVID-19 Actuaries Response Group” who have a short paper out yesterday which shows that death rates of covid patients in hospital have halved from April to June. How we treat patients has apparently improved and low caseloads help. So good news, on a very morbid subject. 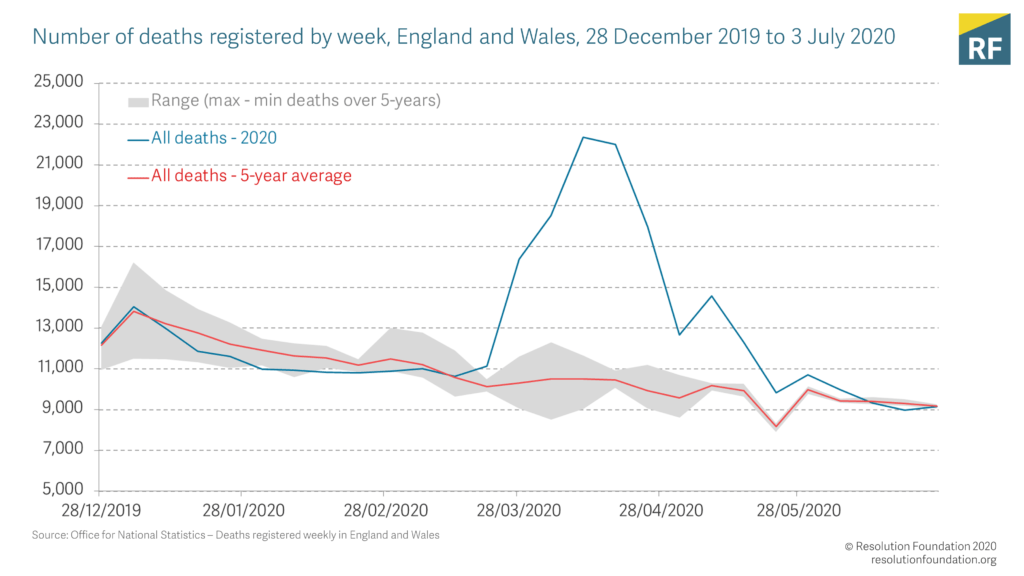