The chicken’s off, milkshakes awol and abattoirs in meltdown. Luckily TOTCs has made it through this week’s supply chain disruptions unscathed. In fact, I wouldn’t mind some interrupted supply chains if that meant fewer interesting economics papers being published – would help in the quest to vaguely stay on top of what’s coming out.

This week’s reads will, as ever, help you stay on top of that tsunami. And if that’s not enough we’ve got our first event back next week to discuss Duncan Weldon’s new book on the last two centuries of British economic history. I’m quite excited because 1) it’s a great read and 2) it’s our trial run for getting back to in person events at Resolution towers! This one is the speakers all being there before we go wild with an actual audience in the coming weeks – hope to see some TOTCs readers in real life very soon.

Have a great bank holiday all.

Regulatory failure. Always good to read something that challenges your priors. Women obviously still lag behind men in the labour market. Part of the reason is uneven sharing of domestic/child-raising responsibilities – men work longer hours and progress faster/further. Does capping the number of hours worked solve the problem? It actually makes it harder for women to get top jobs argues this intriguing paper that asks why more women are at the top of companies in liberal labour markets (US) than more regulated ones (continental Europe). The logic is that employers use hours worked by more junior employees as a proxy for how productive they will be as managers. When the hours worked in those non-management jobs are regulated that benefits lower earning women doing them, but it stops ambitious women from signalling that they are suitable for management roles by working longer. Employers then rely on statistical discrimination, hiring more men because on average they will work longer hours than women. Turns out you can’t always get what you want.

Strong stabilisation. We’re always keen to bring news of innovative policies round the world. In Canada a short and sharp election is underway. Trudeau (rightly) thinks incumbents should go to the polls sooner rather than later as vaccine gratitude declines and “the pandemic never ends” anger rises (if I was Boris I’d be less chilled about a 2023 or 24 election than the pundits). Anyway, the opposition Conservatives in Canada released their manifesto this week, including a proposal for stronger automatic stabilisers (policies that automatically provide more fiscal support for the economy in bad times, and less in a boom – think unemployment benefits that mean government automatically spends more when unemployment rises). We’re in favour of this – fiscal policy needs to do more heavy lifting in downturns now that central banks can’t. Specifically they propose making benefits temporarily more generous during a recession. Read Claudia Sahm’s summary – who better given the ex-Fed economist is the originator of the ‘Sahm Rule’ that the proposal draws on.

Brilliant bureaucrats. All big organisations face a challenge – how do they get their workers to deliver in line with their objectives. Two common approaches involve giving people financial incentives to do what you want or setting rules for how they operate that managers then monitor. Or you can trust the staff. A great experiment (free version) conducted via procurement officers in the Punjab government injects science into the debate. The findings: handing more control from monitoring managers to procurement officers reduced prices paid by around 9 per cent. Financial incentives had a much smaller or no effect – not because they failed in making officers work harder (they actually spent 14 per cent more time on procurement) but because it didn’t overcome the problem of bad monitoring managers holding up progress. The lesson? There’s big money in getting your bureaucracy right.

Longer view. Discussions about Sub-Saharan Africa’s economic performance tend to focus on low growth rates in the second half of the 20th Century, because that’s when data is readily available for. But when it comes to longer term patterns, the area is often left out of economic history debates (the relative performance of Europe and Asia dominate). So everyone will probably learn something from this paper that examines the economics of 8 former British colonies back to 1885. There’s lots of variation between countries obviously, but some headlines: 1) many of these countries had levels of per capita income on par with large Asian economies until the 1980s (e.g. relative decline is relatively recent) and 2) African economic growth began before the colonial scramble for Africa in late-19th century (e.g. mid-19th century income levels in Ghana were significantly higher than previously thought, consistent with the Gold Coast being commercially important pre-colonisation).

Rubbish ESG. Environmental, social, and governance investing is all the rage. It’s how the world of finance will do its bit to save the planet. But’s it’s a load of nonsense, says Tariq Fancy, until recently the Chief Investment Officer for Sustainable Investing at BlackRock (the mummy/daddy of investment managers). A new blog of his has rightly had a lot of attention (it could have done with some attention editing pre-publication too but read Robert Armstrong’s excellent summary). It is a takedown of the idea that ESG investing will make a significant contribution to addressing climate change – arguing that it’s distracting us from the big policy and behavioural changes that will actually make a difference. There’s a lot of arguments but they include the facts that if ESG investing could really drive change AND deliver better returns money managers would already be doing it, and that investors just have much shorter time horizons than societies do in the face of challenges like climate change. Plus he reasonably asks, do democracies really want investors rather than elected leaders making choices about the social change that reaching net zero brings? I don’t – although it’d be nice if the elected leaders actually did make some of those choices.

It’s been a weird summer. One day’s headlines are about a booming economy, the next it’s panic about the recovery being doomed by supply chain traumas and a lack of staff. The optimists and pessimists both need to calm down. The ride out of this crisis was always going to be bumpy. Fighting a pandemic by switching chunks of global capitalism off and on isn’t the same as fiddling with an electricity switch. The public at least get it: as our chart shows, more than a third of us think a return to normal is over a year away – and the months passing hasn’t seen that proportion reduce… Policy makers need to catch-up. Who knows what will happen to hospitalisation rates this Autumn – schools and offices being back will compete with more vaccinations/infections to decide. But they are high and flat now, so there’s a non-negligible chance they’ll pose a challenge to the NHS requiring the return of some restrictions (I say that with neither certainty or enthusiasm). This isn’t about lockdowns, we’re talking about much less drastic measures like home working or large events being curtailed. That will require fresh – but targeted – economic support. The Government should be clear how it will handle that situation if it arrives. We’re in a far better position now than this time last year, but that’s not an excuse to repeat last autumn’s denialism about the unpleasant choices the virus might leave us with. 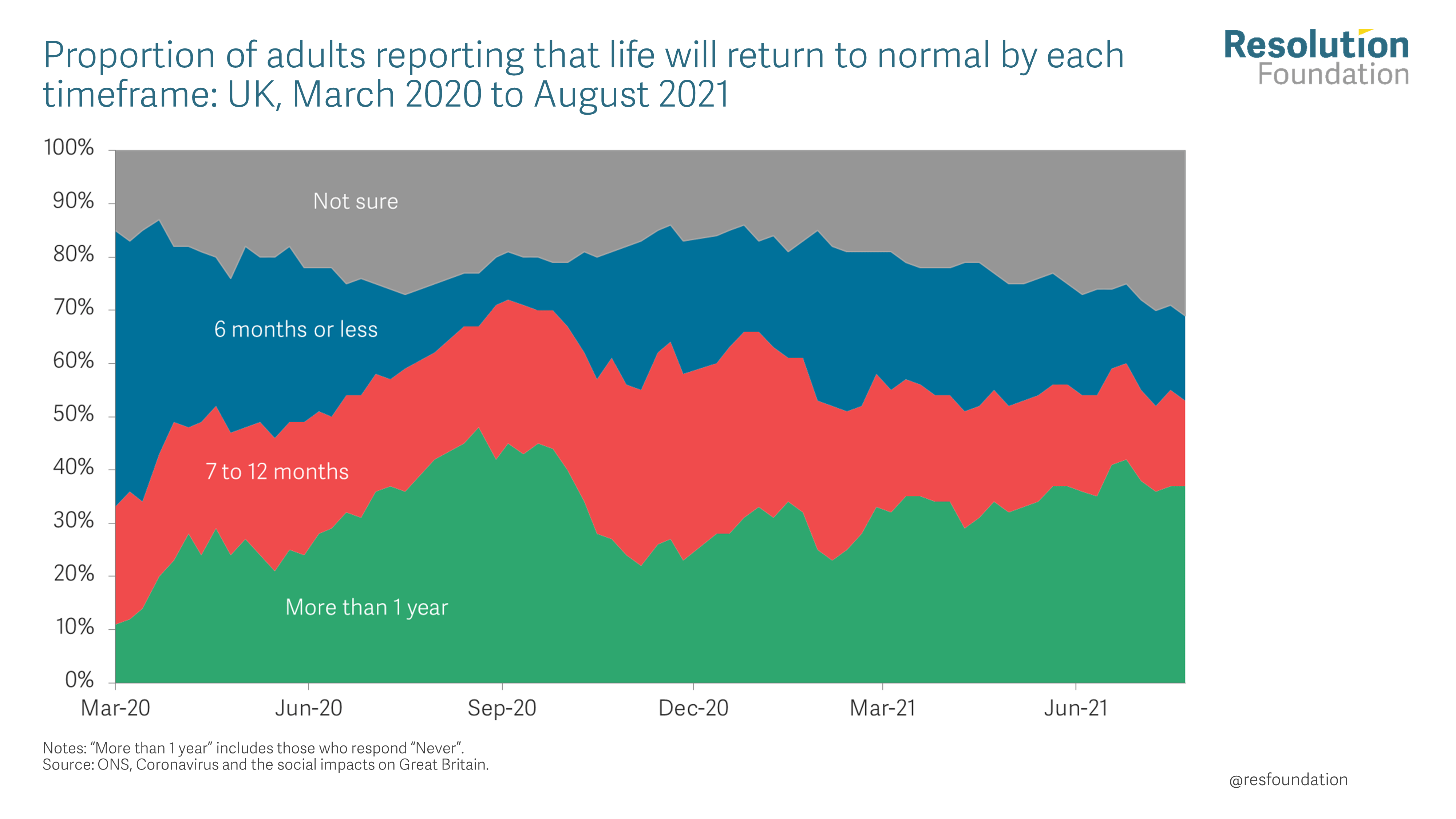