It sounds like we’re approaching D-Day with regards to the reform of social care funding in England. That’s really welcome given the sector has been putting out SOS calls for well over a decade and we’ve politely looked the other way. This won’t come cheap – decent care for an ageing population, with smaller contributions from individuals requires money, money, money. Probably £10 billion of it. And that’s going to be coming from a National Insurance rise. Obviously I have a dream where we raise Income Tax rather than NI for a whole host of reasons, but to be more constructive on Monday we’re setting out the ways in which some of the (big) problems with an NI rise can be ameliorated.

The Government is taking a bit of a political gamble on this, but will mix the announcement up with extra NHS cash so that more of us think we’ll get something back for higher taxes. But it’s right to take the gamble – after all the lesson of the last few years of British politics is that the winner takes it all.

Enjoy this week’s reads and have a great weekend

PS – hope you’re enjoying the return of Abba as much as us (fake) Swedes are.

Horrible housing. Changes to the benefit system get announced, argued over and then too often forgotten while their impact is actually being felt (I fear this is about to happen on the £20 UC uplift). So take the time to read this report on the 2011 reduction in Local Housing Allowance (this meant Housing Benefit would only cover rents of the cheapest properties in an area rather than a typical home). The headline: this and other LHA changes led to an over 5 per cent increase in overcrowding for Housing Benefit recipients. Pushing up overcrowding just before a pandemic isn’t exactly what policy success looks like.

Interesting inequality. Read Matthew Klein’s latest blog because it does a good job of summarising new research linking three big facts about modern economies: low interest rates, high inequality and an older/slower growing population. His theme is that the first is caused in part by the second two. On ageing, you might think an older population helps reduce interest rates (because people save less once retired) but because older societies have smaller future generations there is also less need for investment to service future demand, which pushes rates down. On inequality, Klein is explaining a thoughtful article on the subject presented at the central banker’s Jackson Hole jamboree. It basically says high inequality means the rich save loads and then need to lend to the rest of us. But the rest of society can only go on taking on ever more debt to service consumption if interest rates keep falling. In addition, indebted households today means weaker consumption tomorrow = less need for investment = even lower interest rates. His conclusion? There’s not much we can do about the demographics, but time to get on with lowering the inequality.

Sleep uptight. Everyone loves a good night’s sleep. Or at least I did when they existed pre-kids. For city dwellers in developing countries the barriers to a proper snooze are rather different – noise/heat/the overcrowding covered above. A new paper measures the sleep length and quality of poor urban residents in India, finding that while they may get an average of 8 hours in bed, only 5.5 hours of sleep takes place on average. This ratio of time in bed vs. asleep is so bad it’s what insomniacs wrestle with in high income countries. Before those of you who do get lots of sleep start gloating, it’s not all good news for you: an experiment that increased sleep by 30 minutes had little impact on productivity or well-being. You know what did work? Afternoon naps. Get napping.

Science cities. Politicians love a cluster – ideally it’ll be high tech, shiny and create good quality jobs. That’s why Silicon Valley/Fen chat is everywhere these days. So it’s not surprising that a popular policy is to announce a focus of R&D support in a particular area in the hope that it creates a thriving specialised ecosystem (a cluster). This is partly behind the Government wanting its science spend to do more for the levelling up agenda. The only problem is that the evidence doesn’t show very big effects of such policies – at least in the short term it’s hard to ‘create’ a cluster. But what about the long-term? That’s the question asked by research into the legacy of Soviet era ‘Science cities’ (which were as state led and planned as you’d expect). And basically it worked. The policy ended with the USSR, but even today these cities have more workers in R&D/ICT, higher education/pay and have outpaced similar cities that didn’t receive the support. Something Boris Johnson/communists can take heart from.

Poisonous populists. I knew Fox News was really bad, is the inevitable feeling of self-satisfaction you’ll get from reading this paper (free version). It examines the political impact of the Fox News of the 1930s: Father Charles Coughlin, a radio host who gave the listener a mix of populism/fascism. They liked it, but luckily for America/the author of this research, they couldn’t all listen to it (thanks to variation in radio signal strength). As a result, the author can see what effect listening to the show had on areas by comparing those with and without signal. Not great (unless you’re a fascist) is the answer. He wasn’t so keen on Roosevelt, so it’s not surprising FDR’s vote was materially lower when Father Coughlin could be heard. More concerning is those areas saw more pro-Nazi groups set up, and had long-term higher anti-semitism. There’s a reason we regulate broadcast news.

We’ve got some long-term social history this week. The UK used to have a massive problem with pensioner poverty – in 1969 and 1979 close to half of all pensioners lived in the poorest fifth of households, a staggering concentration of poverty among the old. But over time, these trends have been turned around completely – thanks to higher employment and better private/state pensions. As the chart shows, today pensioners are disproportionately likely to live in rich households. And as pensioner poverty has fallen, child poverty has surged. Now lots of pensioners still live in poverty, but this big social change is inevitably the context to two big decisions the Government is taking this Autumn: whether to go ahead with the Triple Lock and increase the state pension by 8 per cent and if they should cut Universal Credit by £20/week – affecting 3.5 million children. A new RF report (watch the event here) published on Monday will get into both choices. 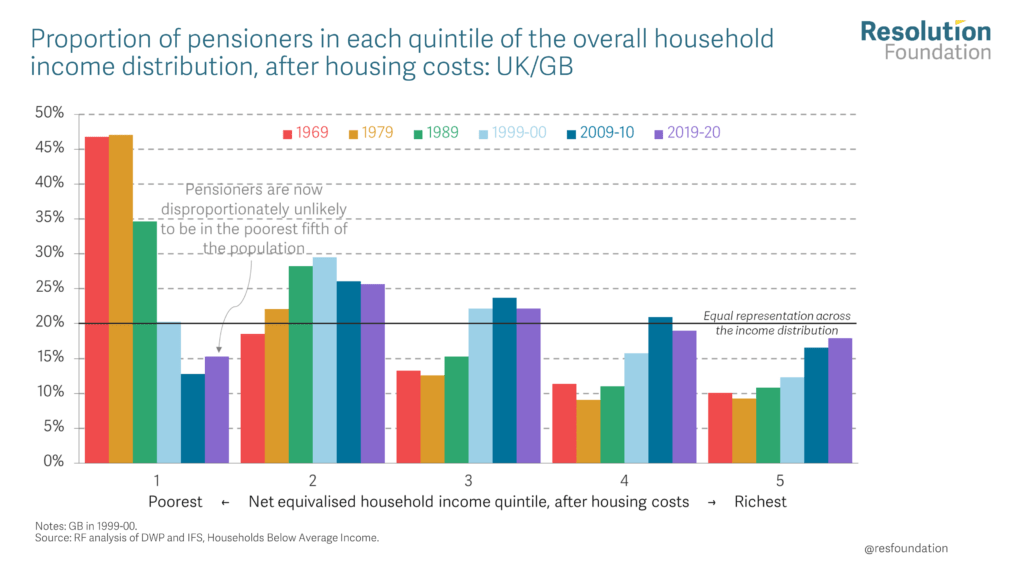