There are busy weeks in economic policy making, and then there’s this week – with its tsunami of tax and spend announcements. We all knew big decisions were coming this autumn, but not that quite so many of them would get answered quite so quickly.

Given all of that, and with the dust starting to settle, we thought we owed you a TOTC special that steps back from the policy detail to reflect on what this all tells us about our politics and our country. The bad news on this being a reflective piece is that it’s longer than usual – hopefully the good news is that it offers at least some food for thought.

Have a good weekend all,

The end of low tax Conservatism…

In the good old days, the fields were green and British politics involved a nice simple left vs right row: Labour calling for higher taxes/a bigger state and the Tories cutting taxes/shrinking the state. Now the fields weren’t ever that green and politics was never that simple, but this week has blown up the idea that low tax Conservatism is a big feature of British politics. And that’s a big deal.

Last autumn we wrote a paper setting out what tax rises might be needed post-pandemic. Alongside wealth tax reform, it recommended higher Corporation Tax, freezing income tax allowances and a new Health and Care Levy. We did not think that within a year, a Conservative Chancellor would have announced all three (with an even bigger Corporation Tax rise and a far less desirable design of the Levy, as we’ll come to). In doing so, taxes have been raised by around £36 billion a year (or 1.6 per cent of national income). Boris Johnson has now directly raised taxes by far more than any Conservative post-war Prime Minister – indeed more than any other Prime Minister except Harold Wilson – as the chart below shows. If, instead of looking directly at tax rises announced, we focus on changes in tax revenues as a share of GDP then Boris still easily beats any other Conservative PM (in fact coming doubling the increase of his nearest rival: John Major). 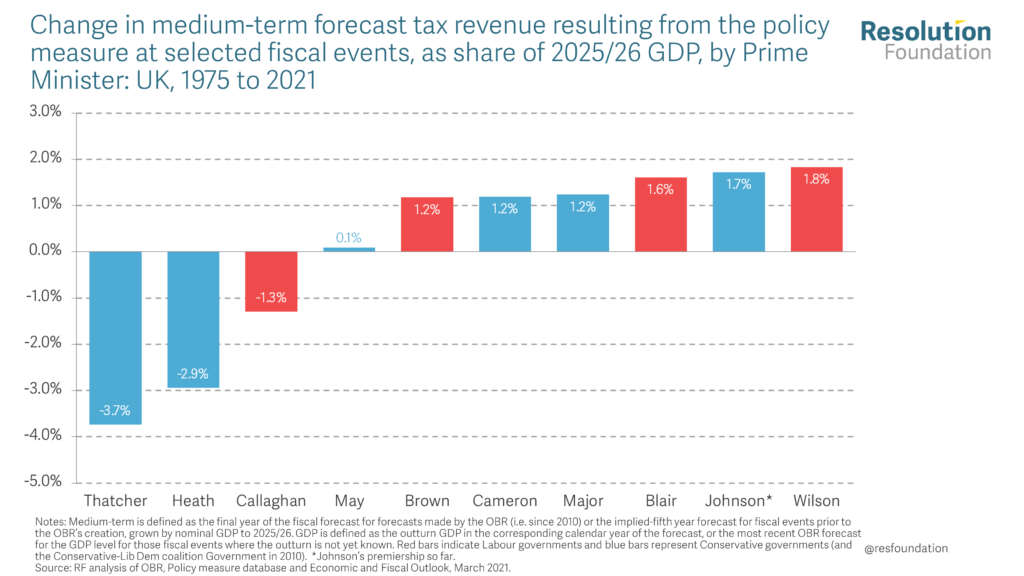 …reflects long term changes in our society and shorter-term politics

Now most Conservatives didn’t come into politics to raise taxes (unlike their Labour opponents, they usually came into it to win elections), but this is where we were always going to be heading. Our ageing society means it’s all but inevitable that 21st Century Britain is more socially democratic than its 20th Century predecessor (despite political pundits regularly declaring the death of social democracy).

People have been writing books about our ageing society for decades, but it’s only the last decade where the economic side of this has really got going (ie via the impact on the relative size of the working age population). And that will accelerate during the 2020s, as all of the baby boomers reach 65, and many move into their 80s. 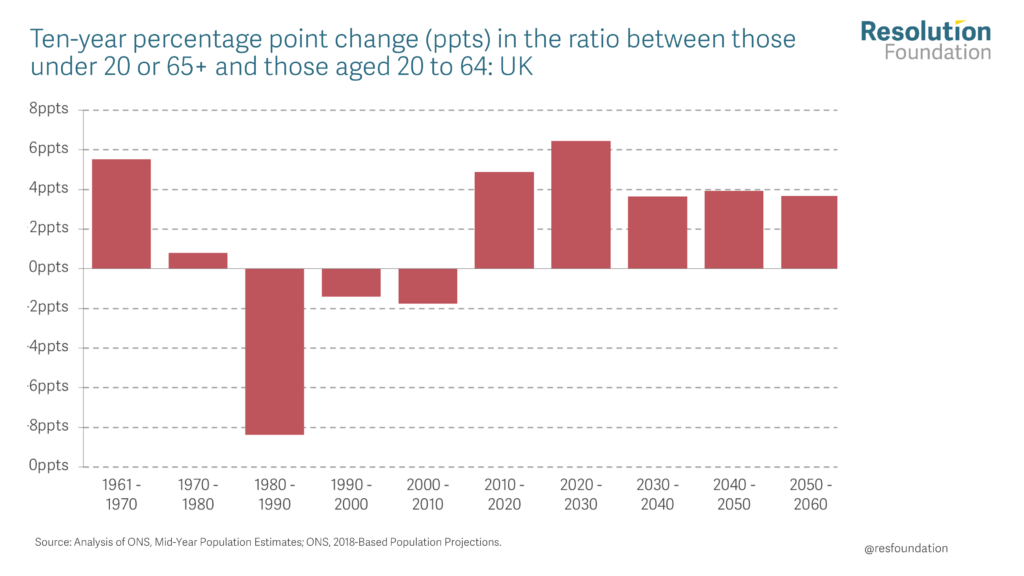 Now you don’t have to be a communist to understand that an ageing society means a bigger state, given governments’ huge role in redistributing over the life course. While lots of attention focuses on pensions, the costs of health and care is the big deal here. Indeed, even if we weren’t an ageing society we’d be spending more of our national income on health, because that’s what countries do as they get richer.

The UK stands out for socialising almost all those costs inside the state – via the NHS. And what this week is all about is socialising more of those costs as we protect people’s assets from the risk we all face of high social care costs (with very different regional impacts, as the next chart sets out). 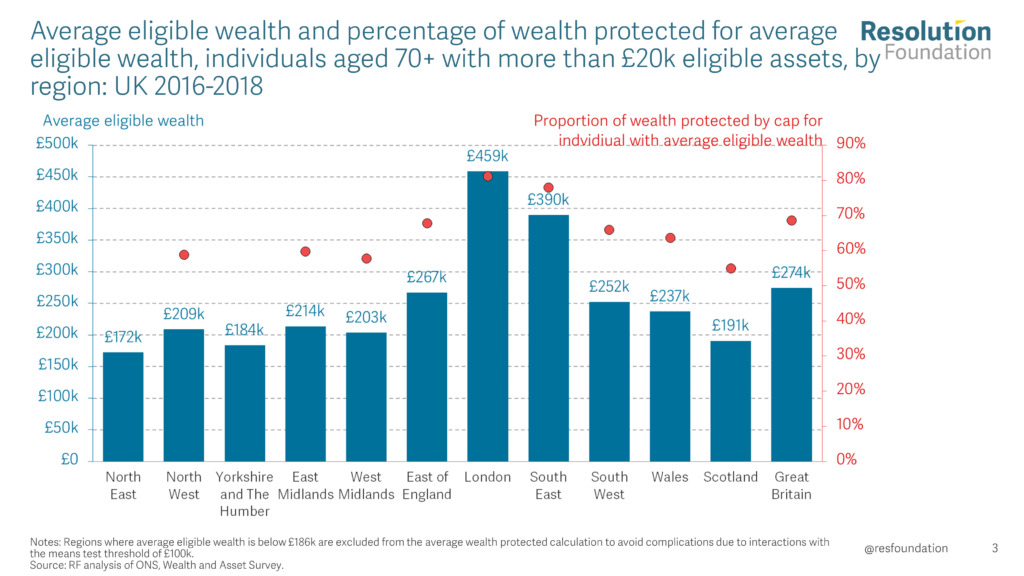 The political prioritisation of doing that also reflects a long-term societal shift: the surge in relative importance of household wealth relative to income (wealth is up from three times GDP in the 80s to around seven times today). Once how well off we are is determined much more by how much of our (or our parents) wealth we can protect, than by the wages we earn, it’s not surprising we want the state to get involved.

Of course, that doesn’t mean taxes automatically have to rise: other areas of spending could shrink. But history means that’s not as simple as it once was. Shrinking the military is how we grew the 20th Century welfare state without hiking taxes. But it’s easier to do that after a world war than today. The share of the state made up of healthcare rose in the last decade in large part because the rest of public spending had a decade of austerity. That might have made for good politics in the 2010s, but it definitely doesn’t in 2021 when over half the population want higher taxes and more spending.

So in raising taxes Boris Johnson is largely reflecting structural pressures for more spending on healthcare, which the existence of the pandemic has made harder to fudge during this parliament.

If long term trends tell us why raising taxes to pay for more health and care spend is the right direction of travel, they also help explain why raising National Insurance (NI) is an increasingly bad way of going about it – whether it’s dressed up as a Health and Care Levy or not. This is partly why Gordon Brown gained in popularity after raising NI during the 2000s but the same tax rise might face more of a backlash today.

NI is fundamentally a badly designed Income Tax, covering only one kind of income (workers’ wages) and treating different types of people very differently (the self-employed and pensioners are both partially exempt). These gaps create real problems – and crucially these have only grown over time.

Here’s two examples. First, raising NI is deeply problematic because it further increases the tax gap between employees and the self-employed. This incentivises firms to push people into self-employment, which is bad for public finances, and for ensuring people get the employment rights they deserve. The scale of these risks wasn’t apparent at the start of this century, but the growth in self-employment since then shown in the chart means they can’t be ignored today. 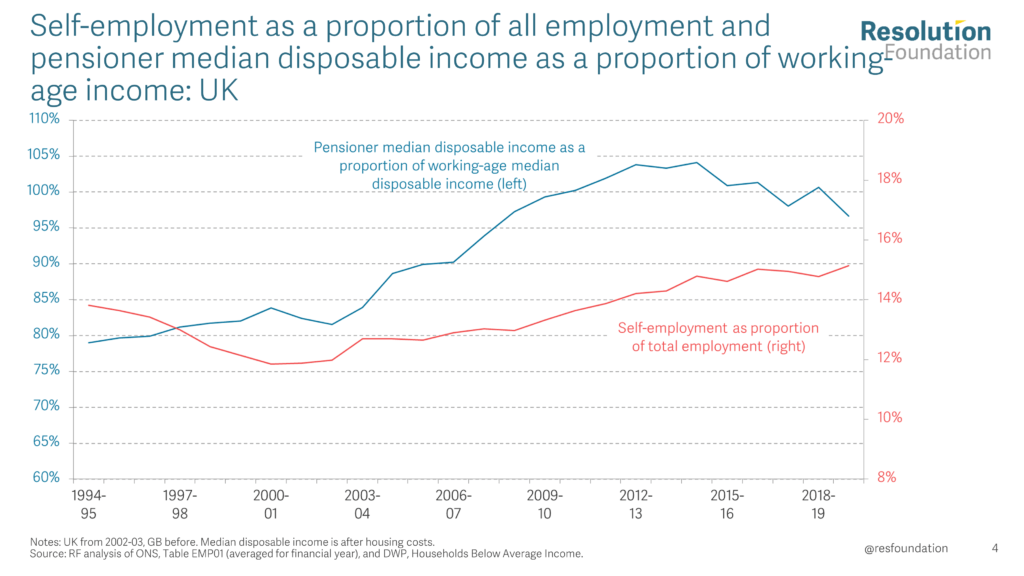 Similarly, the fact that NI falls largely on the working age population not pensioners was less problematic two decades back. Then worries about high pensioner poverty dominated policy debates, while earnings were growing fast in the late 1990s and early 2000s. But wages have stagnated since, while pensioner incomes have grown significantly. Indeed, the average pensioner household is now, for the first time ever, better off than the average working age household. Against that backdrop there’s no reason for asking working age households to pay more but while most pensioners will have to contribute nothing.

The big picture here is that trying to be clever on the politics by raising NI rather than Income Tax creates all kinds of other problems, with very visible unfairness built in that’s much more visible today than in previous eras when NI rose. This shows up in areas I suspect the government has never even considered. For example, a tax that only falls on earned income ends up falling very differently on different ethnic groups in the short term: around 70 per cent of the income of Black and Asian households comes from wages, compared to 63 per cent for White households. This isn’t because the policy is intentionally discriminatory, it’s largely because white households tend to be older than ethnic minority households and so rely on pension income. But the effect of having taxes that for no good reason treat different kinds of income differently means unfairness will appear left, right and centre. And those have grown over time. The lesson of our changing society is that a Health and Care Levy should apply to all income equally, which means being based on Income Tax not NI, and covering dividends and capital gains too. This is most obvious when we come to one of the big issues of our time – intergenerational fairness.

We do need to be talkin’ ’bout our generations

We’ve got a lot of complaints this week for noting that pensioners generally won’t contribute under the new Levy. But I’m afraid it’s not talking that creates the problems, it’s the doing. Let’s compare two recent examples of changes in the role of the state, both with specific beneficiaries and questions over how broadly the costs of funding them should be born.

The expansion of the higher education sector in recent decades has been very significant indeed. The main, but far from only, beneficiaries of this expansion have been students themselves. On that basis the expansion has largely been funded via higher student fees, with younger generations footing the bill in two ways: students themselves facing high marginal tax rates to pay back student loans, or future generations more generally because a huge proportion of such loans aren’t paid back and become government debt. Either way the young (who go to university) benefit and the young (whether or not they go) pay.

But when it comes to social care this week very different choices have been made. General taxation has been raised on workers, while exempting pensioners (or landlords) with higher incomes. But this isn’t just about how the money is raised. When Sajid Javid was asked this week whether the package was generationally unfair, he rightly reminded the interviewer that half of social care funding actually goes on working age adults. What he neglected to say is that the government’s prioritisation of one problem facing the social care system (how we can protect our assets from the risk that we all face of facing very high social care costs) will overwhelmingly benefit pensioner users (with significant assets) of social care rather than working age users (who are rarely in that position). In 2019-20, only 2.7 per cent of social care users who had self-funded, but then reached the point that they passed the means test, were working age. And this is in a system that already has big questions over its treatment of the working age population: the minimum income a council needs to leave a single working age adult for living expenses if they are receiving care at home is £91.40 a week, for example, compared to £189 for pensioners.

Long term economic trends in the labour market and accumulation of assets have dramatically shifted the relative living standards of different age groups in Britain over recent decades. Many of those are well beyond the control of politicians. But it is the job of policy to avoid making them worse when policy choices do have to be taken.

We’ve seen a huge package of policy measures announced this week. Many will be surprised by the scale of what the government is attempting by way of tax and spend. And the government itself may be surprised by the scale of the criticism they face on the fairness of their plans. But some of the big changes we face as a society help explain both how low tax conservatism has reached the end of the road, and why those questions of fairness are centre stage.