You’re all hybrid working and the PM’s into what you’d politely call the ‘hybrid truth’. Fed up with being left out, I’ve gone for a hybrid TOTCs this week: a swift special on yesterday’s energy bills support package and then a few quickfire reads to get you through the gaps in your Jubilee street parties (I’m so busy celebrating that there’ll be no TOTCs next week).

Have a good weekend Long live the Queen.

This week’s mini special was inspired by a question I was asked on 5 Live yesterday: was Tory MP Richard Drax right that the Chancellor was “throwing red meat to socialists”? The flippant answer of course is that your modern socialist doesn’t tend to eat meat, red or otherwise. The better answer, given that Drax was really talking about the windfall tax u-turn, is that he’s right only if you define Thatcher as a raging lefty. As David Willetts always reminds us, Maggie introduced a windfall tax on banks.

Rather more constructively, let’s look at what Rishi Sunak is doing with fiscal policy this year.

Top targeting. Starting with yesterday’s package, it’s got two defining features. First, it’s big – the £15bn cost this year near doubles the amount being spent to ease the pressure on living standards (we’re well over £30bn now). Second, it’s generally well-targeted. As our first chart shows, twice as much is going to the bottom half of the population as the top. The Chancellor has spread £6bn worth of jam thinly (via the additional £200 energy bill reduction for every household – or more specifically every property) and focused £9bn on poorer households and pensioners. 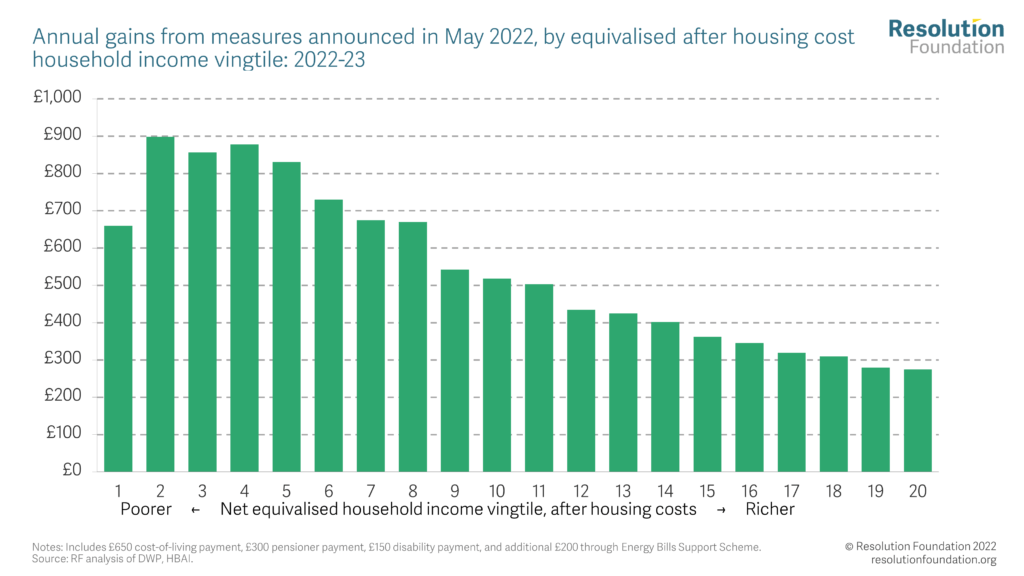 Inevitably there’s rough justice with one-off targeted payments given the highly constrained choice of delivery mechanisms. Someone earning £1 too much to qualify for Universal Credit misses out on the £650 that someone earning £1 less receives. And large families don’t do well because children are ignored: families with 3 or more children are seeing their energy bills rise by over £500 more than those without children, but will get the same level of support.

Gaping gap. Does this mean the Chancellor is a massive lefty whose total priority with energy bill support is the poor? Nope, because this was only the latest addition to the help for households following packages announced in February and at the Spring Statement in March. The best way to think about yesterday is as filling in the gaping gap left by earlier announcements, which focused support on middle-and-higher-income households. When we look at the three announcements together you can see the support is fairly evenly spread, with only slightly more at the bottom. 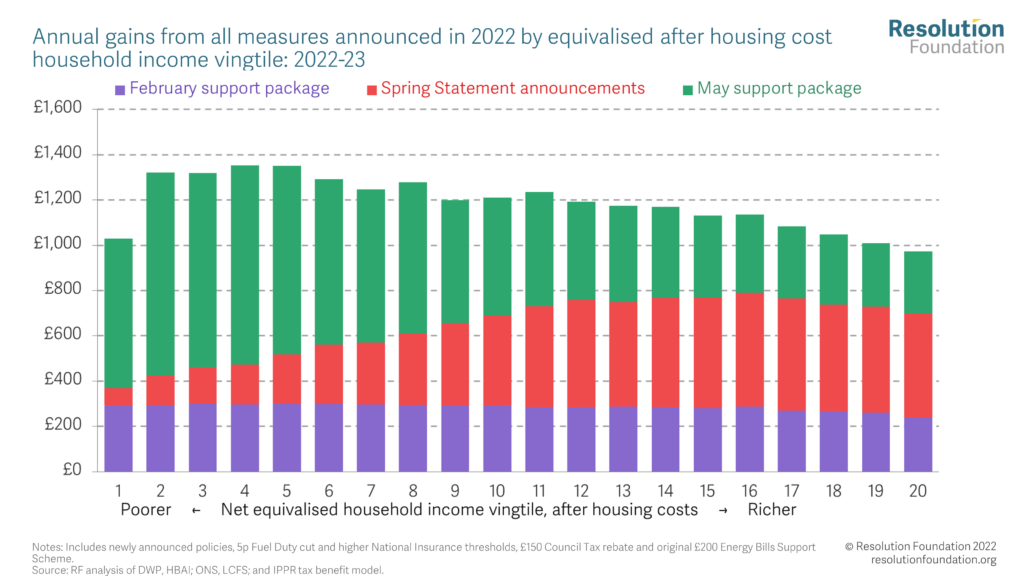 Given how concentrated amount poorer households the pain of rising energy bills is (because energy is a bigger part of what they consume and they have so much less scope to manage the pressure by cutting back on luxuries or drawing down on savings) this fairly even support might be surprising. There’s a case for some universal support, not least because our benefits system has big holes that mean some of those in severe need would get no support otherwise. But the balance between targeted cash for lower income households and something for everyone is more balanced towards the latter than the problem itself is. I’m told politics might have something to do with this.

Redistributive Rishi? The quick among you will have noticed that the last chart still doesn’t cover all the fiscal policy the Chancellor has put in place this year – it just reflects the policies announced to boost living standards. Obviously some big tax rises also came into effect in April – with the rise in National Insurance rates and freezing of Income Tax thresholds. Our final chart adds those to the mix, showing that fiscal policy overall is very progressive this year because those tax rises are concentrated among higher income households. The poorest fifth gain on average £1,195 per household, while the average is a £456 LOSS for the top fifth. It’s this chart that makes the Chancellor look a lot more like Gordon Brown than George Osborne. 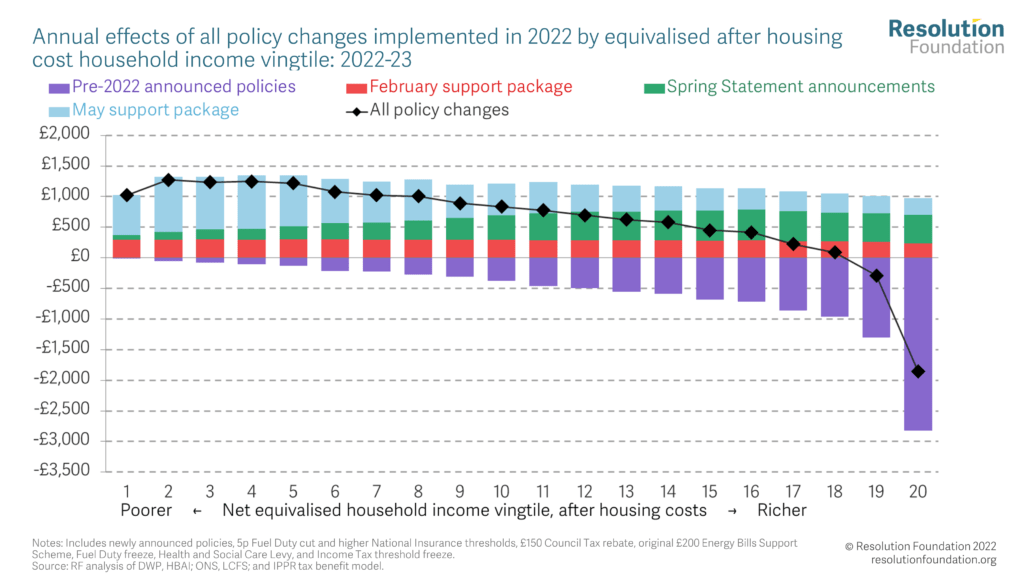 So, is Rishi Sunak in fact Robin Hood? Well temporarily is probably the best answer – note the chart is telling you specifically about 2022-23, not the lasting effect of these policies. That matters because the giving to the poor bit is temporary given the one-off payments are… one-off (although it’s very welcome he confirmed that, as normal, benefits next April will rise in line with September 2022’s inflation rate ie a lot). So why are some Tory MPs upset? Because it’s the robbing the rich bit that’s permanent.

Hope that’s cleared it all up for you. Now for the quick fire reads we promised.

Creative Children. The hippy parents among you are going to love this – tiger mums less so. A new paper (using UK data) shows that our children’s creativity plays a significant role in determining life outcomes. Children that teachers evaluated as creative at age 7 went on to get better jobs and earn more. The authors argue this partly reflects the (immune from automation) premium that the modern world places on thinking outside the box and that policy makers need some “creativity-improving interventions”. If they insist, but can we teach the kids maths first?

Wonderful wages. Our friends at the Low Pay Commission have released their mega review of the impact of the National Living Wage’s initial 2015-2020 phase (when we ramped up the minimum wage to 60 per cent of the median). There’s loads of food for thought in there. It concurs with our own Low Pay Britain report, also out this week, that the policy raised wages and cut hourly pay inequality, without costing jobs. But there is less good news on the productivity front. Firms surveyed back in 2015 said they’d raise productivity in response to the higher wage – which is exactly what we want. The only problem? They lied, with no impact of the NLW on firm productivity (note it might still boost productivity by shifting workers from lower to higher productivity firms, which we saw in Germany after their minimum wage introduction).

Viral business. Many unusual things happened during the pandemic (British people talked to their neighbours for example). One was that the number of firms created, which usually falls in a recession, rose. New Bank of England research finds new firms were disproportionately online and in the retail sectors, mostly created by solo entrepreneurs who were founding their first businesses. Those of you loving a start-up will like the positive news that these new firms posted job vacancies at a faster rate than firms created prior to the pandemic, helping our recent fast labour market recovery. The less good news? These new firms are now being dissolved at a faster rate than firms created pre-pandemic. If that’s whet your appetite then we’ve got new Economy2030 research on how the pandemic has affected firms next week…