We started the week learning that we could all drive home for Christmas but ended it with fears for tiers confirmed across parts of the country, from Maidstone to Manchester.

To be honest we haven’t got much Christmas prep/tiny turkey hunting done yet, with this week wiped out by examining the Chancellor’s new Spending Review. We thought it deserved a TOTC Special, so that’s exactly what you’ve got below. If the below doesn’t satisfy your appetite, you can read our full overnight analysis or watch what proved to be a very interesting webinar with OBR Chair Richard Hughes and Linda Yueh.

More, more, more I hear you cry. Well you’re in luck. We’re kicking off a five-webinar series on the challenges posed to economic policy makers by Covid next week. See you there for more fiscal chat on Monday morning.

Have a good weekend everyone,

The economic backdrop to this mid-pandemic Spending Review is a grim one, with lasting damage being done to household and public finances. In the face of that reality the Chancellor has ramped up coronavirus spending this year and next, while quietly beginning to bring down longer-term spending plans, and largely ignoring the reality of tax rises to come.

The initial economic hit from coronavirus may not be quite as catastrophic as the Office for Budget Responsibility (OBR) previously thought, but it is still staggering so. The UK economy is set to shrink by 11.3 per cent this year, the biggest decline in over three centuries. Welcome news on vaccines means the economy will bounce back, but the recovery will be ultimately incomplete, with the economic ‘scarring’ leaving it permanently 3 per cent smaller, or £1,400 for every adult in Britain. 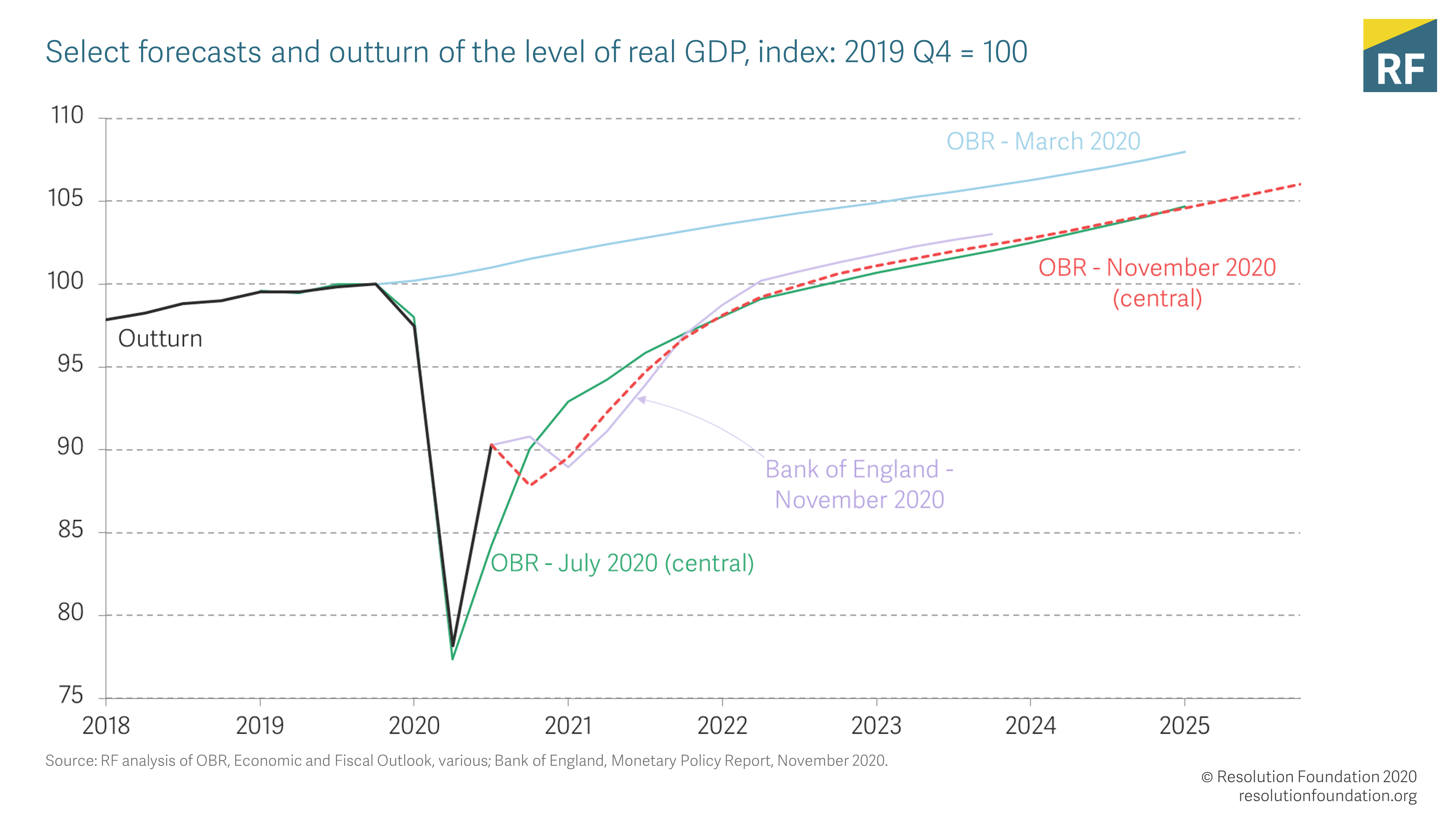 Of course, big Brexit decisions will also be taken in the coming weeks, with the OBR expecting a no deal Brexit to permanently knock another 1.5 per cent off the size of the UK economy, on top of the 4 per cent that is baked into the forecast assuming a deal is done. This means the economic scarring from the worst-case Brexit outcome would be almost double the long-term cost of the coronavirus crisis.

More welcome news came on jobs. The peak in unemployment is now expected to be 7.5 per cent in the middle of 2021 – lower and later than previously thought. This would still mean unemployment rising by a million to reach 2.6 million, equalling the levels of the financial crisis, but below those of the 1980s and 1990s recessions. 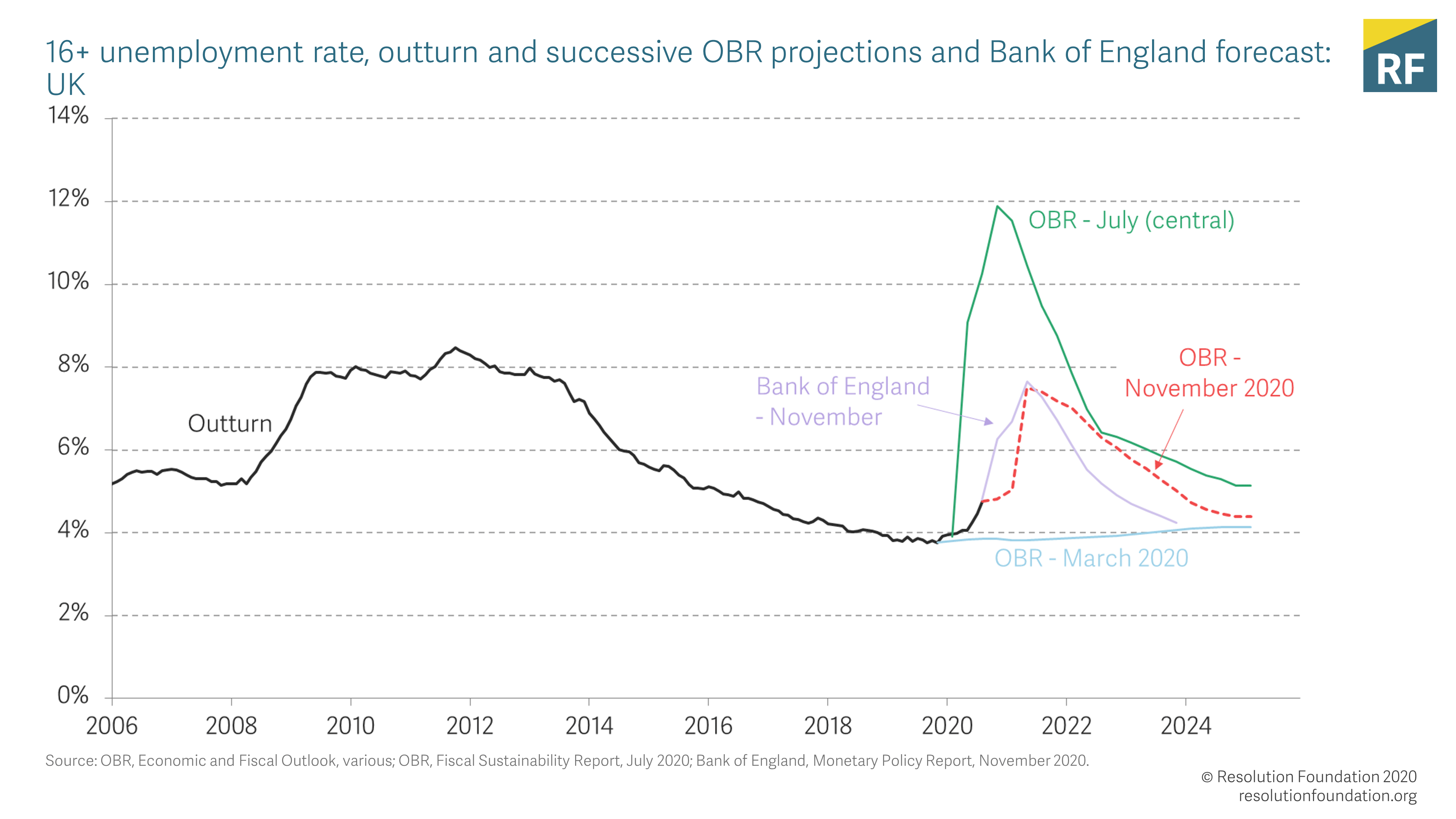 However, a lastingly-smaller economy means lower wages. The new forecast has them down by £1,200 a year per worker in 2025 compared to pre-pandemic expectations. The hit to household incomes that follows from that comes on top of the unprecedented financial crisis and Brexit-induced living standards squeeze of the 2010s. 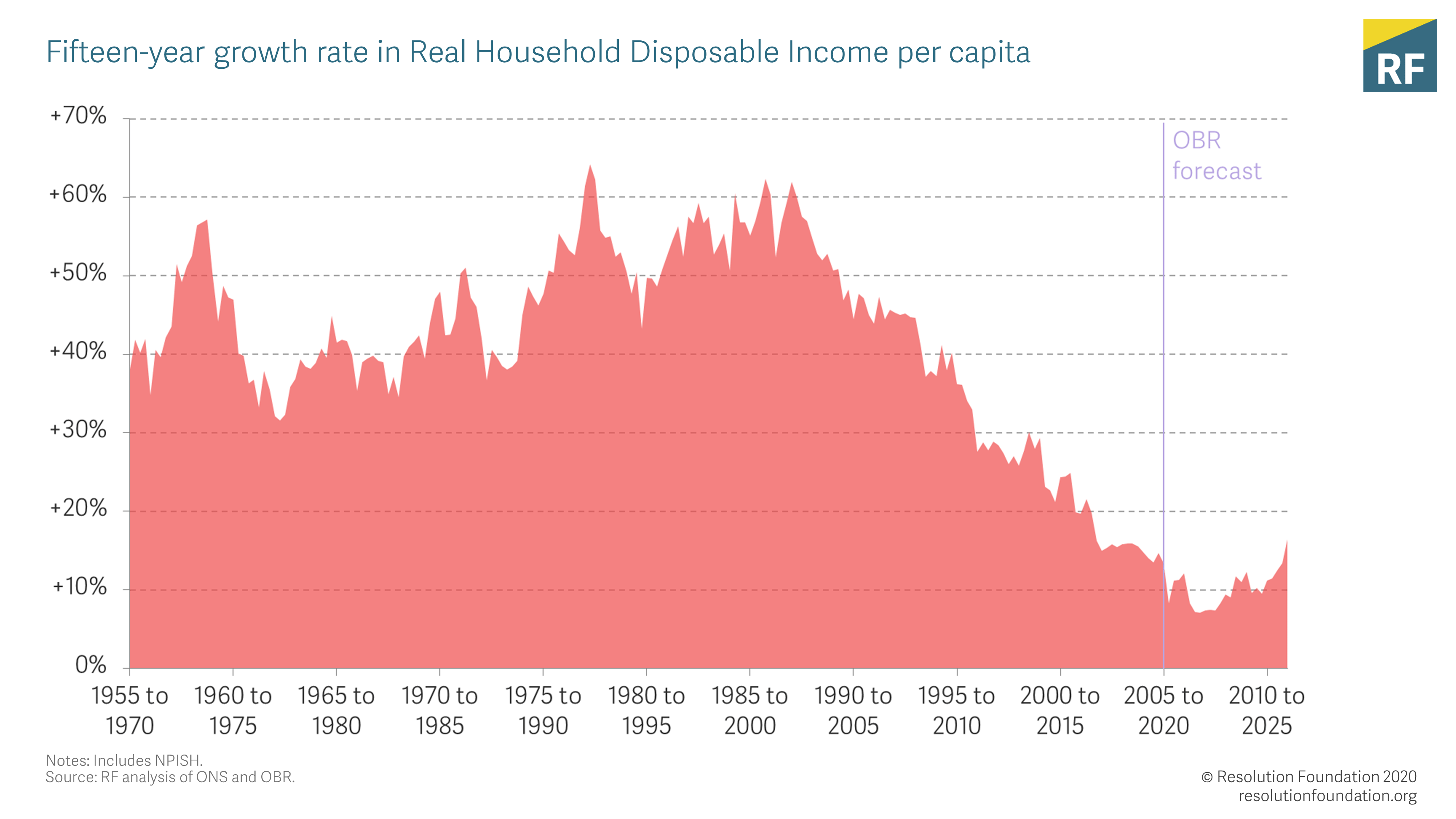 Three ‘once-in-a-generation’ economic shocks mean that household incomes, which grew by 40 per cent in the 15 years prior to 2008, are set to have increased only by a quarter of that (10 per cent) in the 15 years since. Against that backdrop, it makes no sense for the Chancellor to have failed to extend the £20 a week boost to Universal Credit into next year, leaving 6 million households wondering if they are set to lose over £1,000 a year just at the time when the OBR expects unemployment to reach its peak. 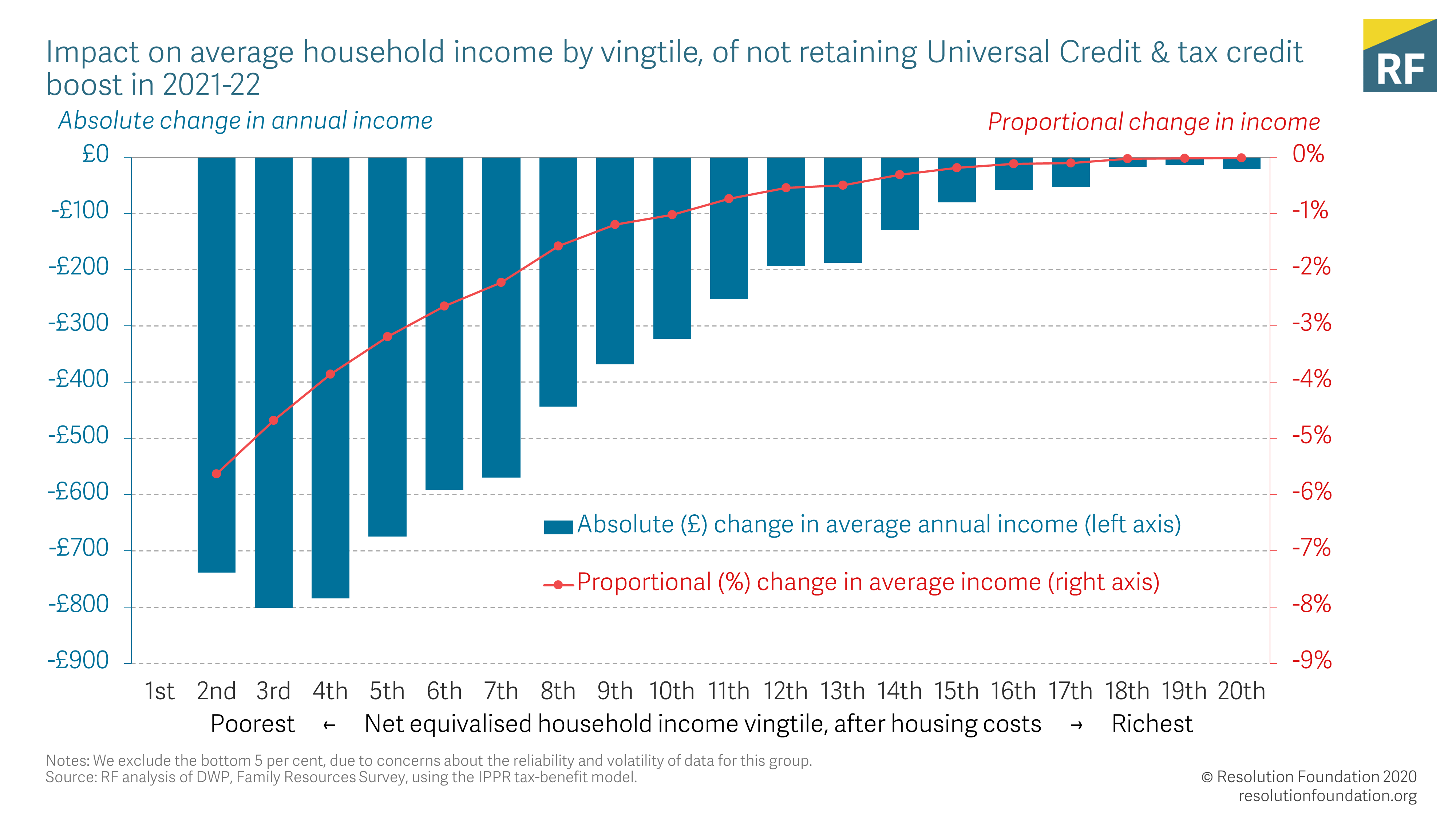 The public, as well as household, finances will be hit by post-pandemic economic scarring. The Chancellor’s policy response is the main reason that borrowing this year (£394 billion) will be more than twice the peak seen during the financial crisis, but the smaller economy will push borrowing up by £57 billion by the middle of the decade. 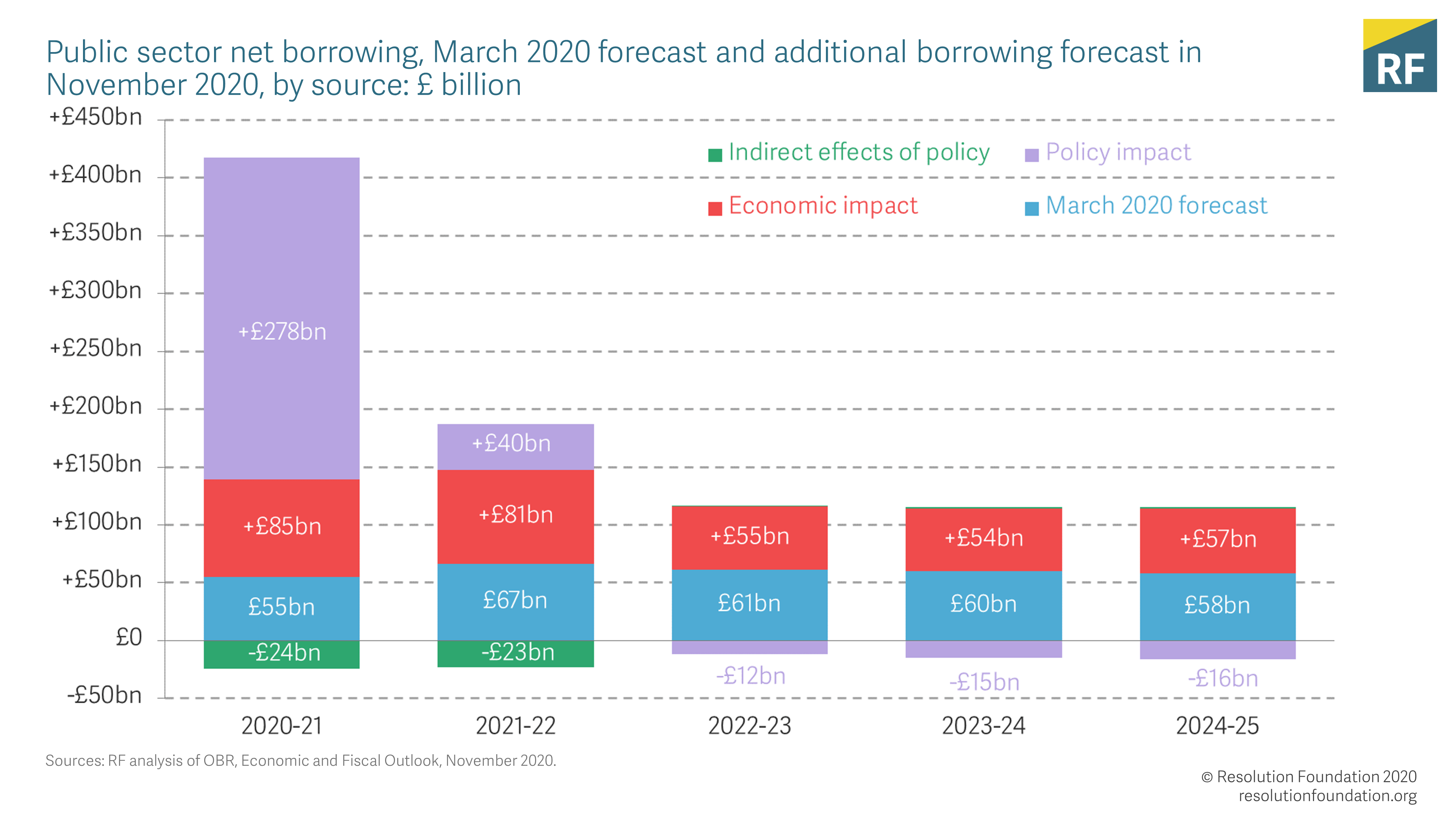 Faced with a grim economic outlook, and an ongoing public health crisis, Rishi Sunak has chosen to double down on coronavirus spending, which is set to total around £335 billion (£12,000 per household) over this year and next. The British state has never seen anything like this outside of World War Two, with government spending as a share of the economy reaching 56 per cent. 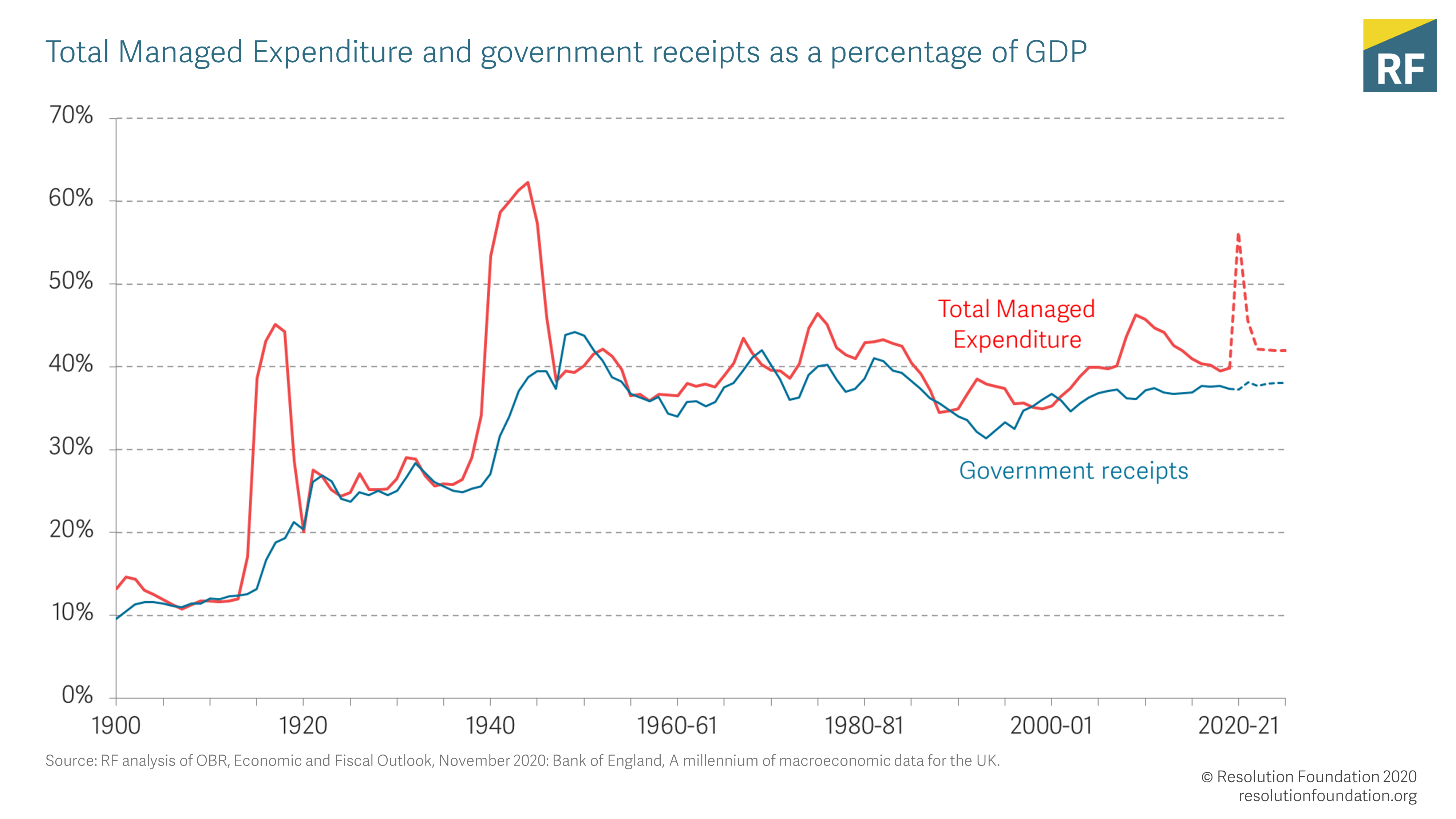 In contrast to spending like there’s no tomorrow on the pandemic, the Chancellor set out plans to spend less when tomorrow arrives. He does not intend for any coronavirus-related spending to be permanent and, without mentioning it in his speech, set out a reduction of £10 billion in planned normal public service spending next year, rising to £13 billion in 2024-25. 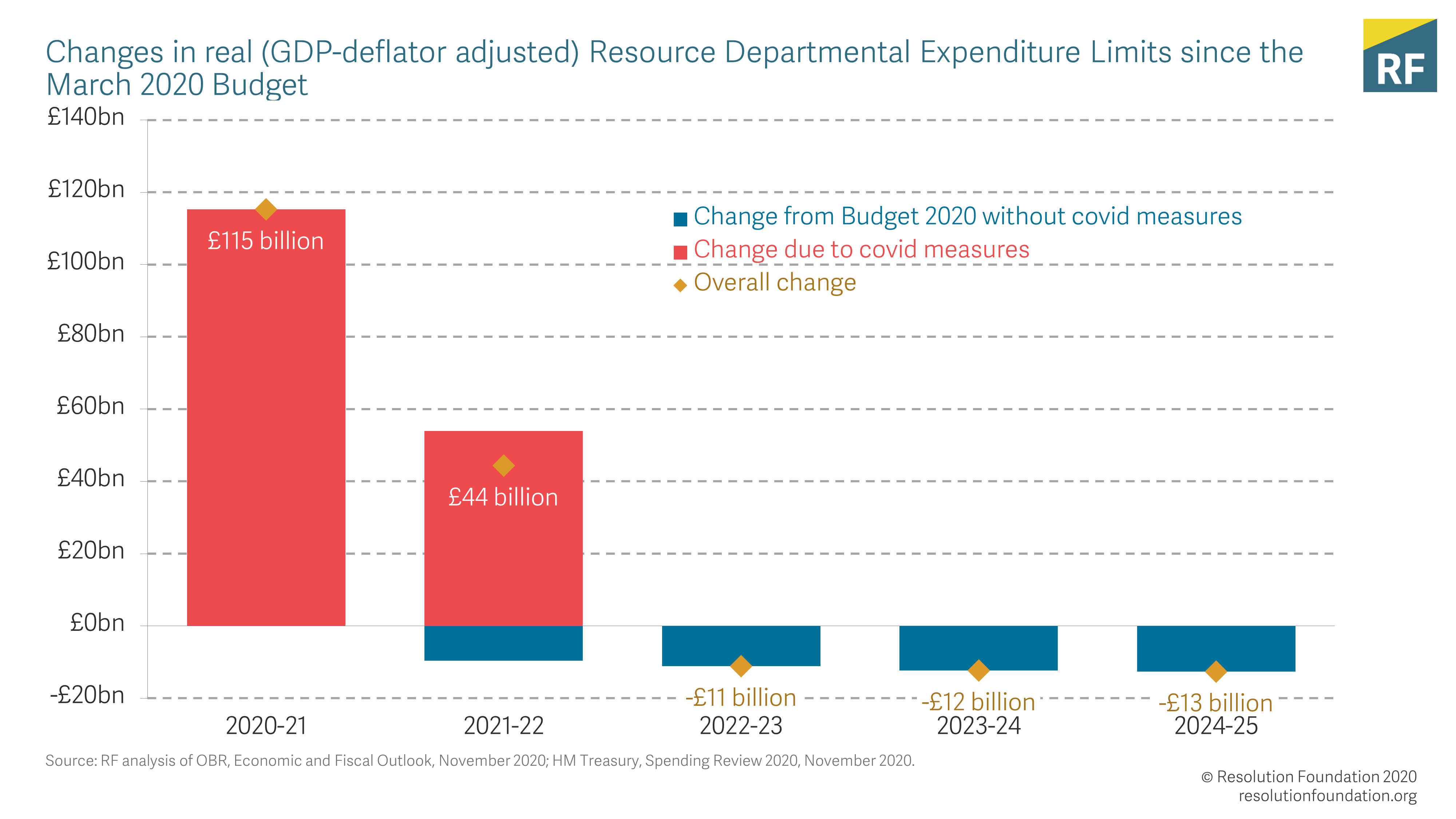 Cuts to the aid budget (saving £4 billion) have taken the lion’s share of the attention on the 2021-22 Spending Review itself. Overall, the Review has seen non-coronavirus day-to-day public service spending rise by 4 per cent next year in cash terms (compared to a very large 7.8 per cent rise this year). Big spending increases have gone to the usual priorities such as health, but also to departments taking on new responsibilities post-Brexit, including HM Revenue and Customs (up 20 per cent in cash terms) and the Department for Environment, Food & Rural Affairs (whose budget more than doubles over two years).

But looking further ahead, the cuts to planned spending, alongside the Chancellor’s professed intention to return aid spending to 0.7 per cent of GDP and ongoing protections for NHS and Schools spending, mean it will not feel like the end of austerity for many public services.  Unprotected departments’ day-to-day spending will remain almost a quarter lower in real per capita terms in 2024-25 compared to 2009-10, with the Department for Transport and the Ministry of Justice lower by 45 per cent and almost a quarter respectively. 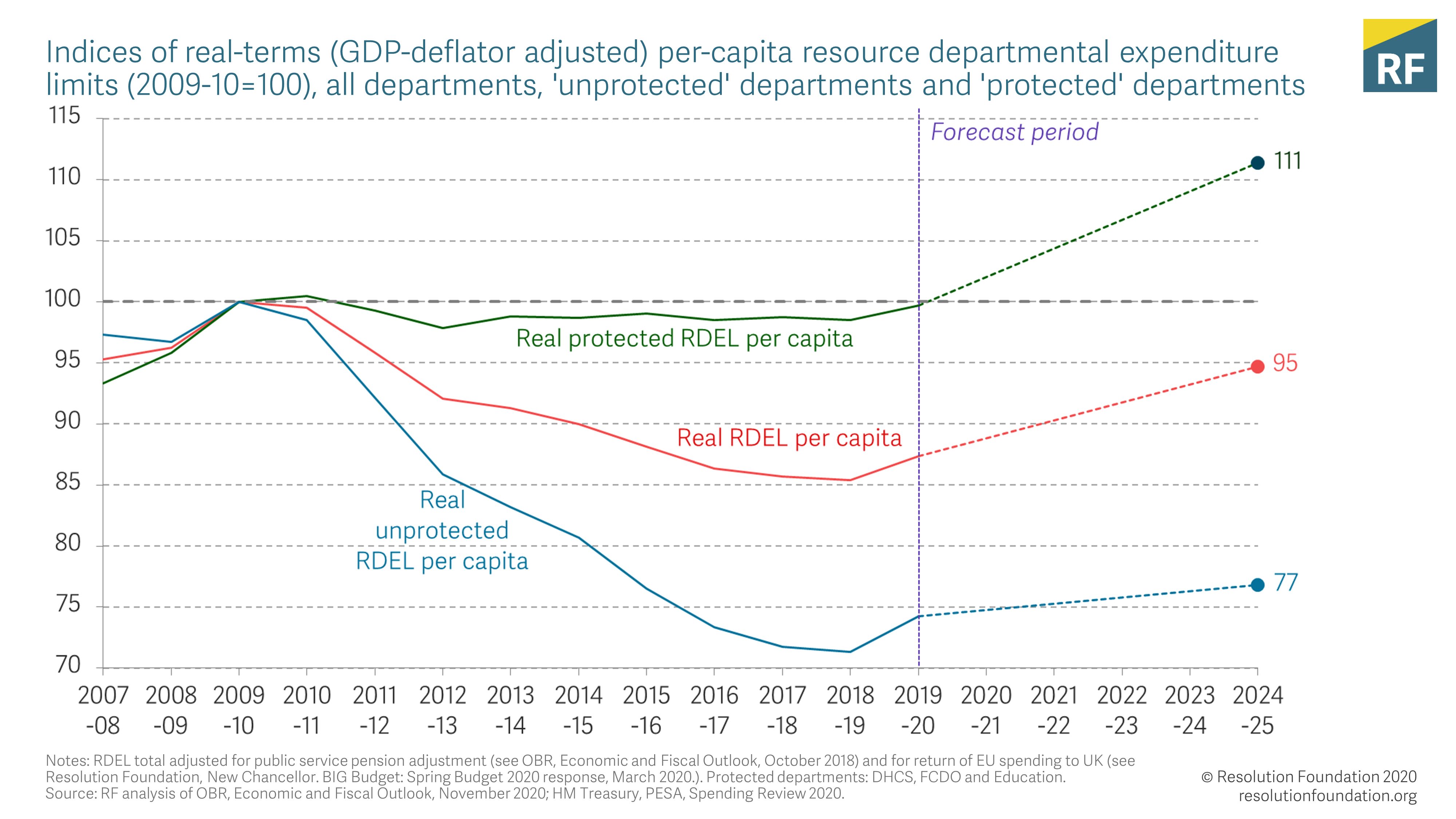 In contrast, the Chancellor stuck to the ambitious capital spending targets he set in March. Public sector investment is still set to average 2.9 per cent of GDP over the next five years, the highest sustained level since the late 1970s. Half of the £27 billion real increase in spending from 2019-20 to 2021-22 is set to be spent on a combination of increases for the defence, health, transport and science budgets. Rishi Sunak also announced a new £4 billion ‘Levelling Up Fund’, under which Whitehall will allocate grants of up to £20 million to local areas that submit bids with the support of local politicians. A commitment to addressing regional inequalities in capital spending is welcome – alongside revisions to the Green Book in this vein – but a highly centralised (and potentially politicised) system of small grant funding is unlikely to swiftly deliver the lasting structural change needed. 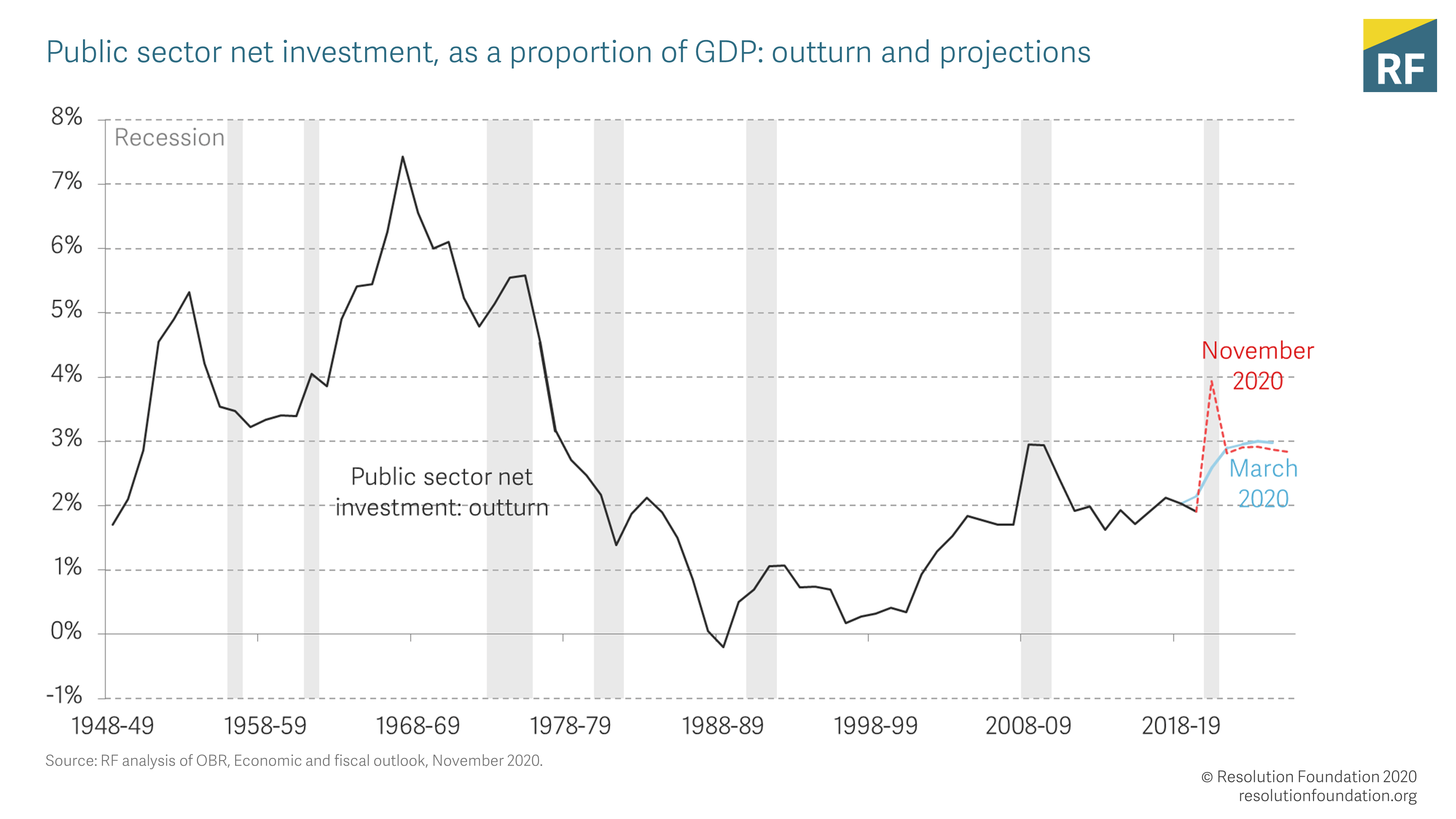 There is no immediate pressure to set out plans for a fiscal consolidation, with the cost of servicing the government’s debt next year set to be £20 billion less than previously expected. But once the recovery is secured, tougher choices will come. Balancing the current budget by the end of the parliament will require around £27 billion of fiscal consolidation. That figure is likely to increase when the Chancellor recognises that his idea there will be no permanent increase in spending post-pandemic is, what you might politely call, optimistic for a Government wanting to be known for ending austerity and levelling up Britain.

So, once a recovery has been secured, the bulk of consolidation will need to come from the tax rises that the Chancellor largely declined to mention this week. Which taxes those will be, like which Brexit we can expect, are questions left for another day.