I’m torn about this week’s Peppa Piggate CBI speech meltdown. At one level, having just got going again on in-person talks, the Prime Minister has considerably raised my performance anxiety. But, on the other hand, he’s massively raised the bar for what an actual fiasco looks like. So maybe gratitude is the right response. Plus he’s taught the next generation of budding orators that a decent speech only really needs two things: something to say and page numbers.

TOTCs also only needs two things*. First some reads, which this week make the case for investing in FE and not ignoring services. And second a chart – or in this week’s case four of them (this is the good kind of inflation).

*the bad jokes are optional. Apparently.

College capital. One of the biggest disasters (financial crisis aside) I was involved in during the last Labour government was the belated attempt to splash capital on FE colleges. Having not prioritised the issue, eventually the powers that be decided colleges, not just schools, should get the rebuilding treatment. Initially too few colleges came forward for the cash, then the floodgates were opened and promises made to far more colleges than there was cash to go round (the short lived Department for Innovation, Universities and Skills was short lived for a reason). Anyway the saving grace is that programme provides the evidence base for a new report (blog) showing that large capital grants to improve FE colleges deliver better results than previously thought (which is lucky since we’re investing £1.5bn over five years in them right now). Specifically, more students enrol for higher quality (ie level 3) qualifications, leading to better employment and university attendance outcomes. The improvements happen immediately after the project is finished and persist – and not just because renewed colleges attract a higher achieving intake. About half of school leavers in England go into FE and they’re something worth investing in.

Sizable services. We got a new report on UK services trade/competitiveness from the OECD this week – requested by our own Department for International Trade. Since no-one will read it, given that wanting some service exports is deeply unfashionable in Britain these days, I’m just going to bombard you with some stats: 80 per cent of us work in services, in firms that do 62 per cent of investing (vs. 15 per cent from manufacturing). We export 50 per cent more than we import services wise. Yes, London makes up 40 per cent of that, but financial services exports are important in almost every region. And it’s not a services vs. manufacturing story: manufacturing firms (especially in Wales/North East/Northern Ireland) export a lot of services. An actual economic strategy needs to grapple with these facts, not wish them away.

Realistic redistribution. Why doesn’t higher inequality lead to more support for redistribution in the US? Superstar Stefanie Stantcheva’s latest article investigates links between voters’ beliefs and support for policies. She argues a lack of trust in government is a big barrier to supporting redistribution – and when people are told inequality has risen they actually trust government even less. Plus, Americans are routinely too optimistic about actual levels of social mobility, making them less likely to support redistribution for all the usual “everyone has a fair chance” garbage arguments. The piece is better on the description of the problem than prescribing answers. There are some nuggets of light (showing people that almost no-one pays inheritance tax raises support for it) but calling for ‘better education’ and more academic economists on TV/radio doesn’t offer much hope of progress. With a new paper highlighting the level of inequality delivered by the market in the US (rather than much less progressive tax/benefit systems) as the driver of higher income inequality vs Europe, maybe some more focus on predistribution is in order.

Local logos. You want some Friday afternoon light relief? Fair enough – check out his totally scientific ranking of 399 local government… logos. Who cares if your bins get collected on time, what really matters is where your council comes in the branding league table. Bedford somehow comes top with a weird castle/eagle mash-up. Quite like the Dorset one myself.

Risky restaurants. We all know that financial incentives can make us more/less likely to do things that are considered risky – there’s a reason we whack taxes on tobacco. But a new paper shows they can also change our assessment of how risky the activity is. The research gave two groups of young Swedes vouchers (worth €1.50 or €10) to go to a café mid-pandemic (when latte sipping was a risky activity). Both were more likely to go and those with larger vouchers more so. But what’s interesting is that vouchers didn’t just increase the incentive to go, they changed the risk assessments of those receiving them: those getting the €10 vouchers decided visiting cafes was less risky than they’d previously thought, despite case rates actually going up at the time. The conclusion? Our risk assessments aren’t rational.

Retailers’ enthusiasm for Black Friday is allegedly waning, but we at TOTC are here to fill your desire for rampant consumerism with FOUR charts for the price of one (courtesy of this must-read RF report). You all know by now that, thanks to the repeatedly extended furlough scheme, unemployment was the bark that didn’t bite during this crisis: it’s now just 0.5 percentage points higher than pre-pandemic. That marks it out from previous recessions, but so too do some less positive developments. As the left-hand charts show, economic inactivity for older (not old!) workers has increased. This is a familiar story for men, who have a history of being knocked out of the labour force by downturns – although the scale is still higher than we saw in the financial crisis or 1980s recessions. But it’s a worrying first for older women – and remember this is a group whose growing labour market activity drove much of the employment boom of the last decade. Keeping older workers in the labour market might not have been the challenge we expected to have from this crisis, but it’s the one we’ve got. 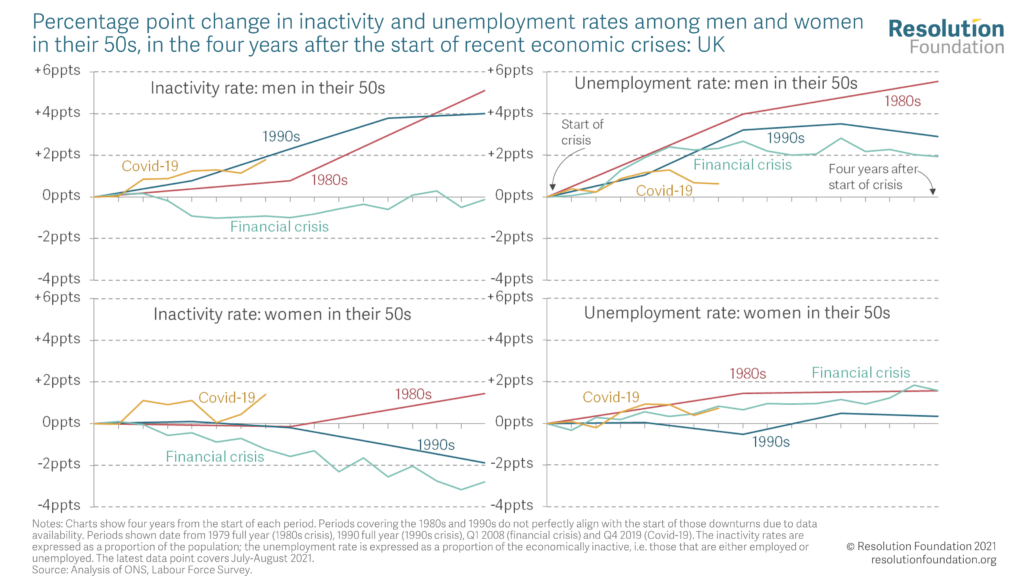