If there is anyone out there still harbouring the quaint idea that it’s the super-rich who face the highest marginal tax rates in the land, they should think again. There are various contenders for that dubious prize but we can now announce a clear winner: the small but fast-growing group of families receiving Universal Credit (UC) who are also having their Child Benefit withdrawn due to there being an earner in the household on between £50k-60k.

Families in this position find themselves paying an effective marginal tax rate of at least 80% (if they have one child), up to 96% (3 kids and the main earner repaying a student loan) – make that 97% if they live in Scotland. These are significantly higher effective tax rates than the already elevated ones facing the far larger numbers of families working on UC or having Child Benefit withdrawn (who aren’t on UC). You can read the details in this research note by Karl Handscomb, Mike Brewer and myself, but the key marginal tax rates are below.

This matters as this UC/Child Benefit withdrawal interaction is a big problem for the affected families, the numbers in this position are set to grow significantly and, more widely, this issue adds to the increasing mess that exists when it comes to support for families with children. 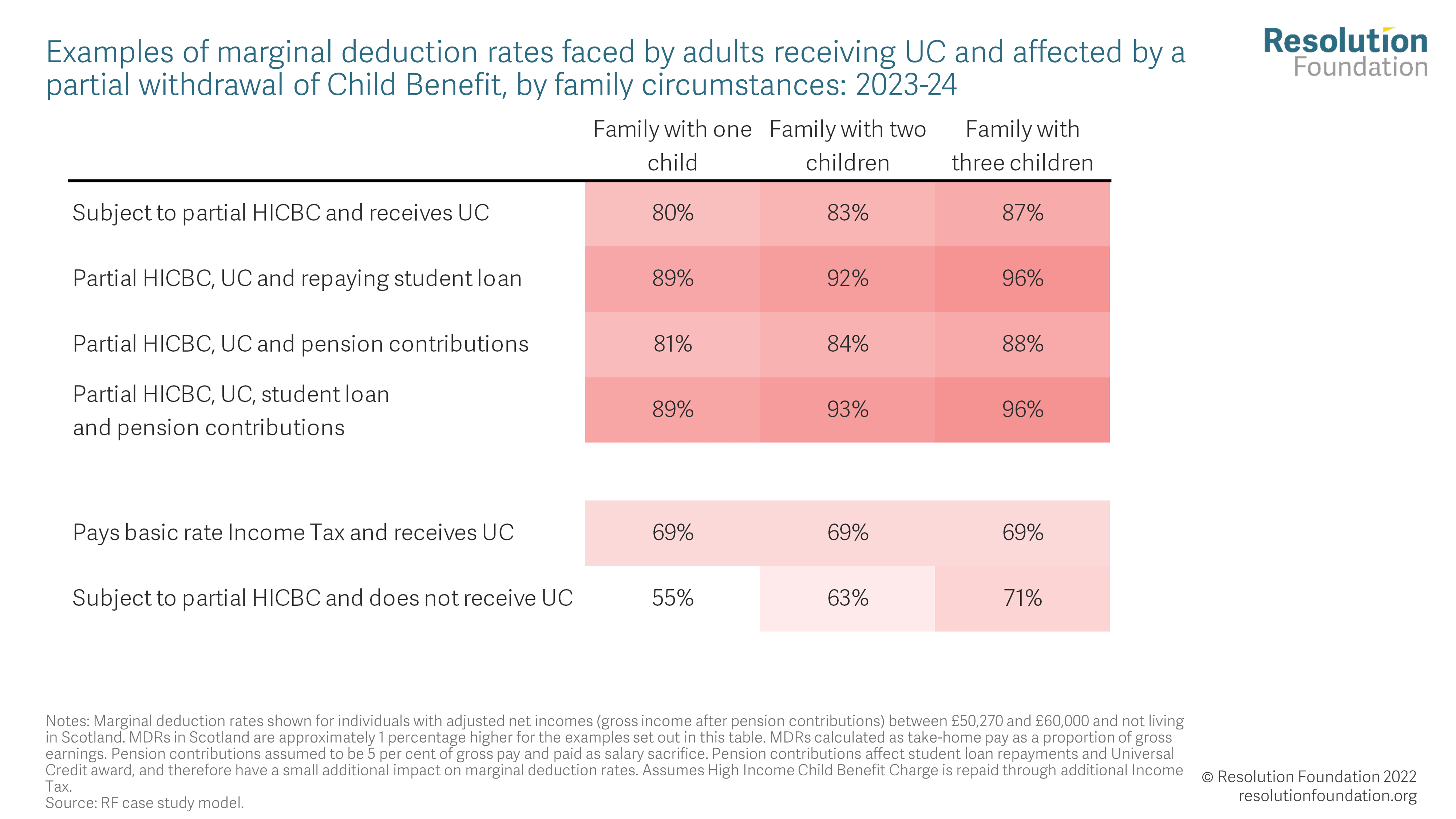 At the moment there are only around 50,000 families in this position, rising to 90,000 by the end of the decade, with steadily more thereafter unless current policy settings change. In addition, there are another 250,000 families on UC and Child Benefit with someone on £40k-£50k who could easily find themselves in this ‘no-gain’ income zone if the main earner gets a pay rise. Again, these numbers will rise.

The first thing to say about this UC/Child Benefit issue is that it is clearly not the most pressing issue facing today’s social security system. These families are unlikely to be facing the acute ‘eat or heat’ choices faced by many this winter and solving this problem isn’t where I would spend the marginal pound. But unless we now live in an era of such diminished expectations that we’ve simply given up considering the functionality of our wider system of social protection and child support then we would do well to consider what this problem says about our current settlement.

Why, you might ask, are growing numbers of families in this position? After all, UC is generally thought of as a benefit for those on ‘low’ incomes whereas Child Benefit is supposed to be withdrawn from ‘higher’ income families.  In reality, there has always been a degree of overlap because some middle and upper-middle income families face very high costs (living in high rent areas and/or high childcare costs) that require support.

But the extent of that overlap is growing fast for two reasons.  First and foremost, because of the decision to indefinitely freeze in cash terms the threshold at which Child Benefit is withdrawn, meaning that ever more families are affected. Even without this aggravating UC interaction, the manner in which Child Benefit is withdrawn has always been clunky. Moreover, even if you accept the logic that led George Osborne to means test Child Benefit in 2013 (and many wouldn’t), if the ‘right’ threshold then was £50k to £60k, the correct figure today would be £64k to £77k, rising to something like £72k and £87k by the end of the decade. Meanwhile, UC has (this year at least) been uprated and, in addition, the rate at which it is withdrawn from households as they earn more (the ‘taper rate’) has been cut. This is a good thing. But it has the inevitable result that more middle and upper-middle income households become eligible. The combination of these two effects generates a slow motion car-crash for work incentives in this £50-£60k zone as each year more families lose their Child Benefit while still being on UC.

No rational policy maker would ever have designed what results.  It creates a £10,000 stretch of income – at an increasingly busy point in the income distribution – where, for the higher earner (or only earner in a lone parent family), there is basically no point seeking a pay rise or getting more hours. It also means that many families who rent can face an extremely long continuous stretch of income where really high marginal tax rates apply. The sole earner in a family would need to reach earnings of £60k before their marginal effective tax rate falls down to 42 per cent (51 per cent for graduates; 54 per cent if we include pension contributions). This is simply pie in the sky for most people.

Take one step back and this episode provides us with an example of seeing like a state – except a highly fragmented one. Policies which may have appeared to make sense in isolation are then layered upon each other – Universal Credit, Child Benefit withdrawal, loan repayments – creating a mess from the perspective of a family.

Over and above the punishing marginal tax rates there is the bureaucratic headache. It’s not just that families need to navigate two entirely different means-tested income support systems run by separate departments – one via a UC claim administered by DWP, and one via the tax system and self-assessment run by HMRC. It’s also that many of the same families will also need to work out whether they would actually be better off claiming tax-free childcare (an entirely separate process) rather than support for childcare through UC (families cannot receive both). As a final twist, households with an earner above £60k, who therefore receive nothing at all from Child Benefit, still need to have the smarts to register for the benefit so that the person who cares for the child protects their future state pension entitlement. It’s an understatement to say that this is not what a family-friendly tax and benefit system looks like.

Step back further still and this unhappy episode also helps illuminate why our wider tax politics is now so vexed – both for aspiring tax risers and tax cutters – and why the 20th century mindsets which still hang over much of our tax discourse, are wide of the mark. Today’s tax and benefit system is just far more complicated than in previous eras with more people – those working on Universal Credit, many graduates, those losing their Child Benefit among others – facing higher marginal effective rates than the rich paying the top rate of income tax. Try telling a graduate on a modest salary raising a few kids in rented accommodation that they should contribute a bit more. In the event that they receive a pay rise (and they may smile ruefully at that notion) it’s already the case that precious little of it would find its way into their take-home pay. Equally, it brings home why talk about tax cuts – like a ‘penny off income tax’ – often fails to gain traction among some key demographics. Why get revved up when you are facing, say, a 70% marginal effective tax rate?

Normal people don’t inhabit the world of marginal deduction rates that pre-occupy economic geeks. But they do twig that their circumstances mean they keep little of any increase in earnings; and they know all too keenly what it feels like to be on the wrong end of multiple bureaucratic systems. Don’t believe those who say this stuff doesn’t matter outside of spreadsheets.

Some reading this may reach for the comfort-zone notion that the ‘solution’ is simply to end all support for households with someone on more than £50k. Those tempted by this response should take a minute. It means either the poorest in the land will be made poorer; or that the marginal effective tax rates facing those on UC on lower incomes should be even higher (or both). Attempting to dodge inevitable trade-offs like this is as unserious as it is fashionable.

The immediate and overwhelming priority should be to improve benefit adequacy for those at the sharp end (trade-off: costs new money). Before long, though, we are going to have to sort out the coherence of the wider system of support for most families with children. We’ve moved from a blend of universalism and targeting to having two increasingly overlapping means-tested systems which are themselves overlaid by multiple systems of support for childcare. A decade of tactical trimming and fiscal freezes have left us with a mess.