Having been a little snarky last week about the progress on Brexit answers, we thought it was only right that TOTCs goes all solution-focused this week. We can’t stretch to a clever wheeze about how to leave the customs union yet keep an open border on the island of Ireland I’m afraid, but read on for some evidenced-based ways to tackle gender gaps in economics, avoid a future financial crisis and reduce nutritional inequality. And the solution to a happy Bank Holiday? Turn off the news.

Tackling discrimination. Discrimination against ethnic minorities in the labour market is painfully persistent – if your job application reveals you aren’t white, you get fewer call backs. Research earlier this year revealed no progress in the last 50 years in this type of discrimination against applicants from Caribbean or South Asian backgrounds. Grim. But what to do? A new paper might have an answer for governments wanting to take a creative enforcement approach. It’s ludicrously techy, but the maths shows that if we audit firms by sending them as few as 10 applications that only vary by implied ethnic background we can use the responses to identify fairly accurately 10 per cent of firms that discriminate in some circumstances. Lawyers can argue if that’ll stand up in court – but it would certainly scare the hell out of firms currently thinking they can discriminate in the privacy of the shortlisting meeting.

Feminising economics. We’ve covered a few times the recent upsurge in focus on the under-representation of women in economics – but what about solutions? A novel study explores the effect of role models on women’s choice to study economics. Students in introductory classes were exposed to successful and charismatic women who had studied economics from that university. The result? An 8 percentage point jump in the likelihood of female students signing up for an economics class. So all you female economics graduates – get speaking at your old university/school. And you men can just get on with ending academic economics macho-nonsense culture…

Crash course. It’s often said that we’ll get the next financial crisis once we forget about the last one – that’s when banks lobbying for looser regulations get their way. So our solution for avoiding another crisis is to make sure everyone reads this great primer on the economic concepts that have come to the fore over the painfully-long period of financial crisis we’ve been living through. From shadow banking to capital inflows and the difference between liquidity and solvency problems – this is great and accessible stuff. It’s also free money for anyone teaching economics – although maybe that’s the wrong phrase given that free (or at least very cheap) money didn’t exactly help with the whole financial crisis thing last time…

Cash not Waitrose. It’s well established that richer households have healthier diets than poorer ones. So called “nutritional inequality” is sometimes put down to the fact that poorer families tend to live in areas less well served by supermarkets – leaving them with a narrower range of less-healthy foods to choose from. So should policy makers focus on spreading healthy grocery stores to more areas? Obviously not, says a recent study examining the relationship between shops and diets in the US. It finds that a “let them eat Waitrose” strategy, which they rather more formally call “exposing low-income households to the same products and prices available to high-income households”, only deals with 10 per cent of nutritional inequality. The real solution – poor families need more cash.

Winging it. Everyone loves talking left- vs right-wing in politics. The French started it. But how useful is it for politicians trying to talk to or understand the public? That’s the focus of a new YouGov study (enjoy the data viz) with lots to ponder for those of you plotting a political takeover. A few highlights. Firstly everyone’s quite lefty on economic intervention and right-leaning on hanging/flogging when it comes to crime. 39 per cent of lefties support capital punishment and over 40 per cent of those that say they’re right wing back nationalisation. It also shows that left-wing politicians talking about NHS privatisation, and right-wing ones banging on about Brexit, are appealing just to their bases. On the solution front the report shows how to bring the country back together: euthanasia (it’s the policy with most shared support across the left/right spectrum).

The world of work isn’t one of gender equality. You may have noticed. On average, women earn 18 per cent less than men. Partly that’s because four in ten of them work part time, compared with one in ten for men, but there’s still a 9 per cent pay gap even just looking at full-time workers.

Alongside any (illegal) pay discrimination, much of the gap is driven by women being under-represented in higher-paying occupations. This isn’t about education – slightly more than half of the working-age population with a master’s degree are women – but they make up just 32 per cent of corporate managers, and 21 per cent of science and tech professionals.

And women are even more under-represented at the very top. In 2015, men accounted for 95 per cent of top firms’ CEOs in the Forbes 500. The book Nudge: Improving Decisions About Health, Wealth and Happiness posited that this is because women are much less likely to take risks and apply for jobs they don’t feel fully qualified for, but new research says perhaps they actually face very different risks to men.

Examining what happens to women in Sweden when they enter top jobs, it finds they pay a high price for career success: a top job in politics or business leads to a higher risk of divorce for women. It makes no difference for men.

The authors share a radical solution from a top Swedish female politician for women wanting to combine career success with marriage: “Find the right husband.” I can’t help feeling that may be missing the point.

Chart of the Week.

To misquote Tony Blair, a new fiscal era has dawned, has it not? We’re at a turning point in the UK’s political economy – borrowing is back on the rise after falling throughout the post-crisis decade. New stats show borrowing up £6 billion in the first four months of this year vs the same period last year. Now, we knew an increase was coming – the Office for Budget Responsibility forecast a 24 per cent rise for this year as a whole. But that £6bn rise = a 60 per cent increase, more than twice the pace our fiscal watchdog was expecting.

The rise is being driven by a surge in spending by government departments. As the chart shows, this is now growing at the fastest rate since Gordon Brown was in Downing Street. Crucially these higher borrowing figures come before recent decisions by Boris Johnson to turn on the spending taps (with more coming in the September spending round). Now there is clearly scope to borrow more and lots of need in our public services (plus it’s perfectly possible this data will change as it’s still early in the financial year) – but if this rate of borrowing increases continue the government’s plan to cut taxes and increase spending further won’t be consistent with the fiscal rules they say they remain committed to. What’s the solution? Maybe the government should think twice about using up all the fiscal firepower bequeathed to them by Philip Hammond before we know if it’s “Deal or No Deal”. 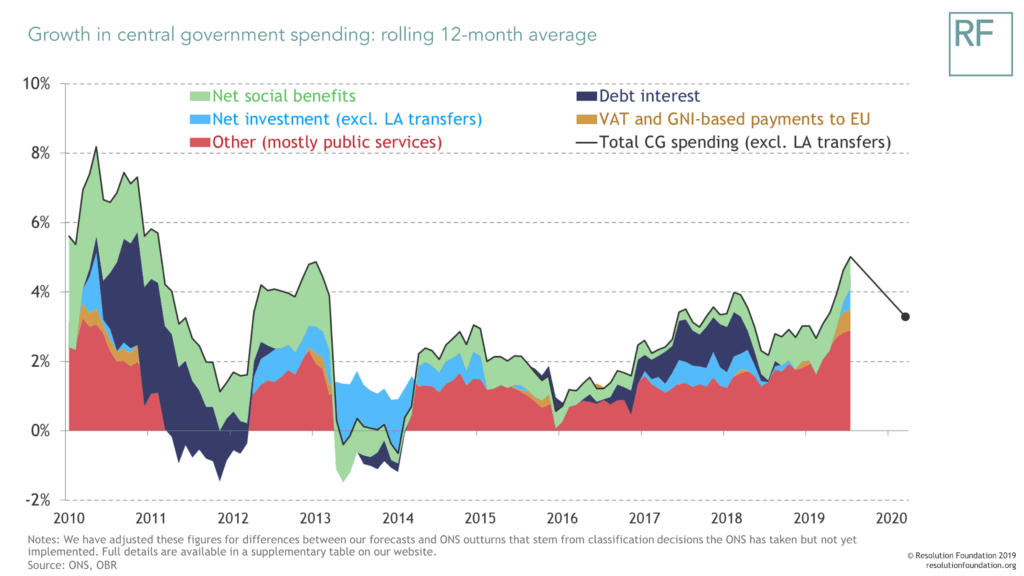