We’re in manifesto week (or fortnight if the Conservatives hold off until Monday). So far the parties are going LARGE. The Lib Dems, having warned about Labour’s big tax and spend plans back in 2017, decided to…. announce a slightly bigger increase in the size of the state than Labour proposed two years back. Labour weren’t having that. Obviously. So they’ve doubled the scale of extra spending proposed compared to 2017.

To be fair, this is just what happens if you always want to say you’ve got the most radical manifesto in a generation… but end up being the leader for more than one election. We await what the Tories do – anyone want to take a bet on an (unwise) inheritance tax cut being centre stage?

Equality manifesto. Since it’s manifesto week, take a look at this great summary of a conference on inequality that our friends at the Peterson Institute held back in October. Their description of the problem doesn’t add much to what we already know (inequality is up, too high and particularly disastrous in the US) – but the real interest is the manifesto element. It provides a useful summary of the tools that (some) economists are offering up to policy makers who want to get inequality down. The main takeaway? There are A LOT of policy options to predistribute and redistribute our way to a fairer society…

Hook, line and sinker. While we’re on the subject of lots of options let’s turn to…. Tinder. Two new bits of research delve into the online dating app. The first read isn’t that surprising – telling us that women go looking for a highly-educated partner, while men are less fussed how educated a potential partner is (although the researcher disputes other work that says men actually hide from more educated women). More surprising, given this app is basically famous for encouraging low-commitment sex, is the second study. Its conclusion: the app involves more effort and fewer one night stands than is commonly thought. You need a lot of matches to even get a date it appears, with only 20 per cent of those sampled having had one night stands via Tinder. I’m nervous about drawing too firm conclusions, but all that swiping doesn’t seem to be getting people very far…

Unequally unequal places. The minimum wage in the UK has done A LOT to help reduce earnings inequality within the regions of the UK over the last 10 years. But what explains why different places have very different levels of earnings inequality? An interesting new paper summarises much of the wider literature, with clear data on US metro areas. Its overall point is that while in 1980 there wasn’t much of a relationship between an area’s population size and its inequality level, today there certainly is (bigger cities have the highest inequality). The authors’ explanation is very skills focused – big cities not only have more skilled workers, but also see the biggest relative increase in the productivity/pay of those workers vs the rest because of agglomeration effects. Unfortunately the paper also points to the fact that over the past few decades in the US, a low level of regional wage inequality is often the result of a weakening economy – although we should always remember that the future is not the past…

Women winning in Europe. Around a third of PhDs in economics in the US are women but only 15 per cent of full professors were women in 2017. Analysis using novel data scraped from research institutions’ websites shows that European countries are doing much better. Even across Europe there are big differences: the Nordics and France win gender equality-wise over Germany or the Netherlands.

Mobile people, higher profits. We’ve covered before the growing literature arguing that higher inequality is bad for economic growth. But what about the relationship between intergenerational social mobility and economic success at a local level? A new article investigates this great question. The answer: places with higher levels of intergenerational mobility have more profitable firms. Why? The authors argue that we’ve got a much stronger incentive to build up human capital and make the most of our innate talents if we live in areas where our success isn’t determined by who are parents were – and unlocking those talents is great for local firms. As we’re in Manifesto week it would be remiss of me not to mention our 2018 Manifesto for Intergenerational Fairness…

Books books books. This is hard to say, but I understand that weekly TOTCs reads just aren’t enough for you. You’ll be pleased then about the word inflation in Election Manifestos, which have morphed from 900-word tiddlers (Conservatives,1900) to 27,000-word tomes (Labour, 2019). But after all that you’ll be wanting some proper chunky reads too. In which case check out Martin Wolf’s brand new list of the best new economic reads. Pay walled I know – so here’s half-a-dozen or more we’d highlight: The Narrow Corridor: States, Societies and the Fate of Liberty, by Daron Acemoglu and James A Robinson; Open: The Progressive Case for Free Trade, Immigration, and Global Capital, by Kimberly Clausin; Extreme Economies: Survival, Failure, Future — Lessons from the World’s Limits, by Richard Davies; A Better Planet: Forty Big Ideas for a Sustainable Future, edited by Daniel Esty; Winners Take All: The Elite Charade of Changing the World, by Anand Giridharadas; The Great Reversal: How America Gave up on Free Markets, by Thomas Philippon; The Code of Capital: How the Law Creates Wealth and Inequality, by Katharina Pistor; and, Escape from Rome: The Failure of Empire and the Road to Prosperity, by Walter Scheidel.

Just in case you haven’t got the message – austerity is over and the British state is going to get a lot bigger. That’s true of all parties, but particularly Labour as noted above. What would this mean for the size of the state? The fastest increase in the size of the state since the swinging sixties (outside of recessions) and sustaining the biggest state ever outside of war. So very radical in terms of UK history, but much less so if viewed from continental Europe. It would move us a long way away from the yanks, and bring us roughly into line with Germany. The Nordics would still be way out in the lead. Personally I find it hard to believe the state isn’t going to get bigger (hello ageing society). Paying for this is obviously tricky, with Labour saying the rich and corporates can foot the bill. The top can certainly contribute more in tax – especially if we focus on wealth, not just income. But in the end we can’t have German spending levels and free broadband without at least some of the bottom 95 per cent paying higher taxes. 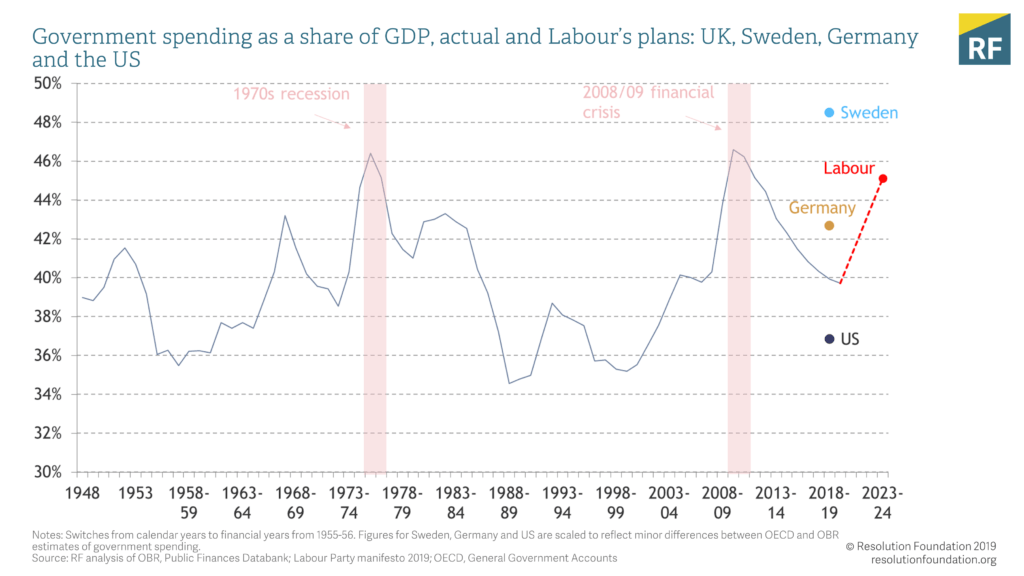