Is it just me or are politicians actually spending the two weeks before the biggest constitutional change in half a century discussing bells, and their bonging? I don’t want to rub it in about the scale of political failure, but it has taken not years but barely a week for the Queen to sort Megxit. We’re already well into the transition period, the haggling over future trade deals is underway and the Canada+ end-game is in sight. Read it and weep, democracy.

Have a great weekend all.

Conserving equality. One effect of a stonking Conservative majority is that they get to do things. But what should they do, apart from the whole “getting Brexit done” plan? Reduce inequality is the answer from Tim Pitt, until recently a special adviser to Sajid Javid and Philip Hammond. In a new essay for the Social Market Foundation he reminds Conservatives of their long tradition of “removing legitimate grievances in order to defend the existing order and enabling it to adapt to societal change”. The charges he lays at high inequality’s door are far from new (it undermines social mobility, growth and social cohesion) but the news is it’s a Conservative setting them out. As he rightly notes, it’s easy for Conservatives to join the ‘capitalism is broken’ bandwagon, but harder to actually do something about it. His answers? Wealth taxation and more generous Universal Credit. Both ideas worth conserving.

Levelling up. We’re going to be hearing a lot about ‘levelling up’ the regions in the coming weeks and months. To get you started on the background listen to yesterday’s Briefing Room discussion with Dr Marianne Sensier, Paul Swinney and Tom Forth among others, and then try this RF article on the North-South divide. The debate about gaps between regions is related to but distinct from that about the gaps between cities and everywhere else. A new paper in the journal Nature (free version) helps to explain why economic activity has got more concentrated in big cities over time. It’s not because anyone chose that outcome, but because our economy has become more complex, and more complex activities are more geographically concentrated.

Unequal charities. This is a depressing one. Dan Corry of New Philanthropy Capital has run the numbers on the geographical inequality of where charities are, and where charitable funding goes. The answer: not where the social need is greatest. The Cotswolds has more than nine times the number of charities per head than Blackpool. Dan argues that while it’s important to level up physical infrastructure across the UK, we shouldn’t forget about social capital. This is also another reminder of how ludicrous the big society idea was – charities can’t step in to solve our social problems as the state steps back if they don’t exist in the places where the state stepping back has the most impact.

Coupling for equality. It’s a bit late to join the Love Islanders in South Africa, but it turns out there are good reasons why more of us ‘coupling up’ could be a good thing. A paper from the University of Chicago suggests that between 1973 and 2013 one of the biggest contributors to growth in inequality in the States was the increased likelihood that both men and women remained single. The reduction in marriage and cohabitation accounted for almost 12 per cent of the increase in the Gini coefficient. The effect was particularly pronounced among low earners. Crucially, the increase in singles had a much bigger effect on inequality than the much more often discussed trend of assortative mating (the posh phrase for people coupling up with those with similar education backgrounds and earnings). There is some good news – declines in the fertility rate over this period had the opposite effect, reducing inequality. So the answer is a rather fine balancing act… more coupling, fewer kids.

Level playing fields? It’s not just Conservatives angsting about inequality this week. UEFA’s at it too, expressing concern about the impact of polarisation in incomes between football clubs. As with inequality amongst humans, globalisation gets a chunk of the blame. And it’s not just the football bureaucrats saying this. A recent academic paper, assessing the impact of globalisation on football clubs through the growing international market for the Champions League, suggests they’re right to be worried. What’s more, UEFA might be reinforcing the trend with recent Financial Fair Play regulations that require clubs to balance their books. The research shows these new rules have increased the gap between clubs’ turnover and the cost of their (very expensive) employees by around 20 million euros per year for the top European competition focused clubs, compared to just 5 million for clubs with more domestic ambitions.

The end of the working week is finally in sight (for most of us anyway). Some weeks can feel longer than others, but how long is the actual average working week, and how does it vary by gender, geography and age? We’re exploring these questions and more in new research published tomorrow. Chart of the Week provides a sneak peek at a big social trend that emerges from the research. For most of history the lowest paid (per hour) workers have worked the longest hours – long hours were how you made ends meet. But that trend has now gone into reverse – the lowest-paid work around 25 hours per week on average, while the highest paid do 36. While it’s welcome we don’t see low earners having to work 60+ hours a week these days, it’s not clear everyone’s happy about the new state of affairs. High qualified, high earners are burnt out (get your violins out for the corporate lawyers), while an increasing number of low earners are underemployed. The lesson is that policy needs to go beyond a higher minimum wage: the hours you work matter as much as what you’re paid for them. 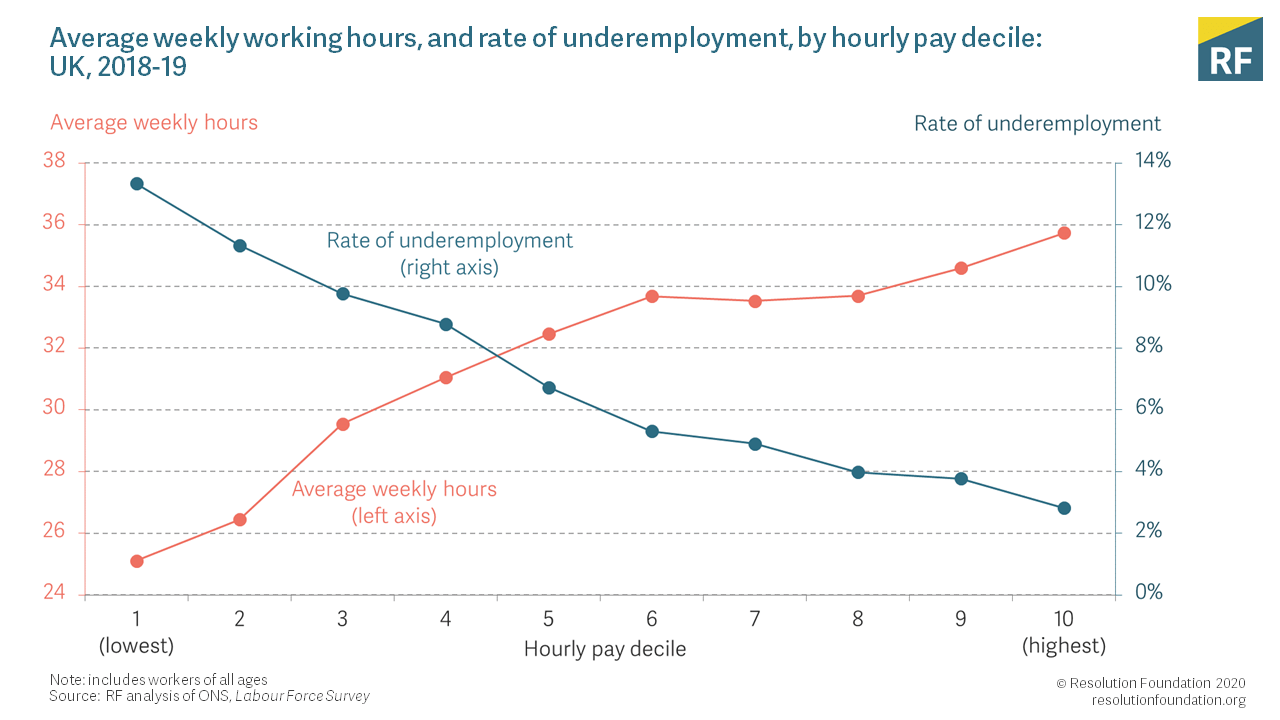