Whether or not football’s your thing, the World Cup is a welcome relief from cost-of-living trauma. Unless you’re one of these fans actually in Qatar paying £12 a pint (or Welsh). The relief is of course fairly dependent on the winning bit, so we’d better see some of that tonight vs. the US. Then at least we can tell ourselves that the ex-colony might be 50 per cent richer than us, but at least we’ve got our incredibly strong record at World Cups to console ourselves with…

This week generally brought more grounds for optimism on the football front than the ‘sorting out the growth disaster’ side of things. We started it with the CBI obsessing about more migration being their solution to the UK’s economic woes, prompting days of headlines about both main parties talking tough/saying no/banning foreign students. Meanwhile back in the real world we end the week with the news that the (already pretty liberal) migration regime which both those parties support has in fact delivered the highest net-migration on record.  Whisper it, but maybe just maybe migration policy is neither the cause of all our problems, nor the solution to them.

Bigger benefits. With so much growth down/taxes up noise around the Autumn Statement, the OBR’s fairly hefty upgrade to welfare spending (around £14bn a year more by 2026-27 vs. what was expected back in March) didn’t get much attention. So a short OBR note this morning is worth a read to understand what’s going on. Half the increase is driven by the £8bn+ cost of uprating benefits with higher than expected inflation – including the very welcome 10.1 per cent rise next April. But another £8bn+ increase is the welfare system aspect of us becoming a sicker society. Here’s the key (and fairly shocking) stat: monthly new claims for Personal Independence Payments are up from 37,000 a month in 2019 to 64, 000 last spring/summer. This is being driven by physical conditions for older people and mental ill-health among younger cohorts. We’re talking about the share of working age population on disability benefits rising from around 10 per cent recently, to almost 14 per cent by 2027-28. The symptom is the benefits bill, but it’s the cause that needs focusing on: poor health.

Squad size. How big should a team be? An interesting/very short blog on this conundrum comes from Ethan Mollick (if you’re really lazy just look at the two charts up front). Drawing on a 2016 paper, it basically shows the balancing act that comes with choosing team size. On the one hand productivity falls as a team gets bigger – we slack off a bit when it’s not just on us, and extra people end up doing less crucial tasks. This is the basis for Amazon’s “two pizza rule” (capping team size by the requirement they can be fed by two pizzas – I don’t think this is meant to vary with individual appetites…). Pushing the other way, as the team grows so does “collective intelligence” – basically the chances that someone in the team has the right talent to solve a particular problem. Tips for maximising collective intelligence include good team processes to reduce coordination costs and… having some social skills. Anyway, have a read and ponder if your team is too big or too small.

Hammering havens. One of my first jobs in the Treasury was on tax avoidance/evasion. Stopping rather than facilitating it before you ask. The international side of this was HMRC doing lots of slow laborious work on transparency agreements (e.g. so we know about dodgy Brits holding undeclared Swiss bank accounts). But sometimes countries can go it alone with real results. So concludes a new paper on Ecuador’s Currency Outflows Tax, which takes advantage of the fact that the South American country has a full dataset of all transactions flowing in/out of the country. Back in 2011 Ecuador reformed this tax so that rather than a 2 per cent charge on all profits distributed out of the country, it was 5 per cent on dividends heading for tax havens vs. nothing for non-tax havens. The results? A 66 per cent cut in relative size of payments to tax havens. By focusing on individuals with substantial shareholdings in companies reducing their payments to tax havens, the author shows they drastically increased their reported income (up 40 per cent) and personal taxes paid (up 55 per cent). Which is nice.

Charting change. I don’t normally include Resolution products in our reads, but we’re publishing some other people’s work as part of the Economy 2030 Inquiry so I think this is legit. Specifically, we’ve started releasing a set of essays on how other countries, and the UK historically, have dealt with economic change before – to see what lessons there are for a post-Brexit/Covid Britain badly in need of a new economic strategy. You should read the whole first batch – including Nick Crafts’ tour of the UK’s (very mixed) history of responding to economic change over the past 150 years or John Muellbauer and David Soskice’s deep dive into the turbulence of the 1980s. Enjoy.

Making maps. We’ve had a bit of a theme of sharing maps recently, and a reader suggested the National Library of Scotland’s efforts should be more widely appreciated. So here’s their handy tool for comparing maps of GB today with those from a century or so back. My very urban street was half built and at the end of the 19th Century with the green fields of Tottenham just north of it…

Britain’s cost-of-living crisis is entering a new phase as temperatures drop and heating bills rise. Government support is big (the Energy Price Guarantee will cost £16 billion between January and March alone) but the months ahead are going to be tough for most. But how people are responding is different, as COTW – based on new ONS data out today – shows. Almost three-in-five households in the most deprived areas are already cutting back on essentials such as food and fuel – vs one-in-three in the least deprived areas. This is worrying. And unsurprising. Britain’s toxic combination of low growth and high inequality has left poor households spending over half their family budgets on essentials – there’s not much luxury spend to cut. Meanwhile it’s households in richer areas responding by investing in a crucial part of the long-term answer: energy efficiency measures. Better insulating Britain’s housing stock is the single biggest net zero challenge we face in the 2020s and it can’t just happen for wealthier households – the subject of a major RF report in the coming weeks. 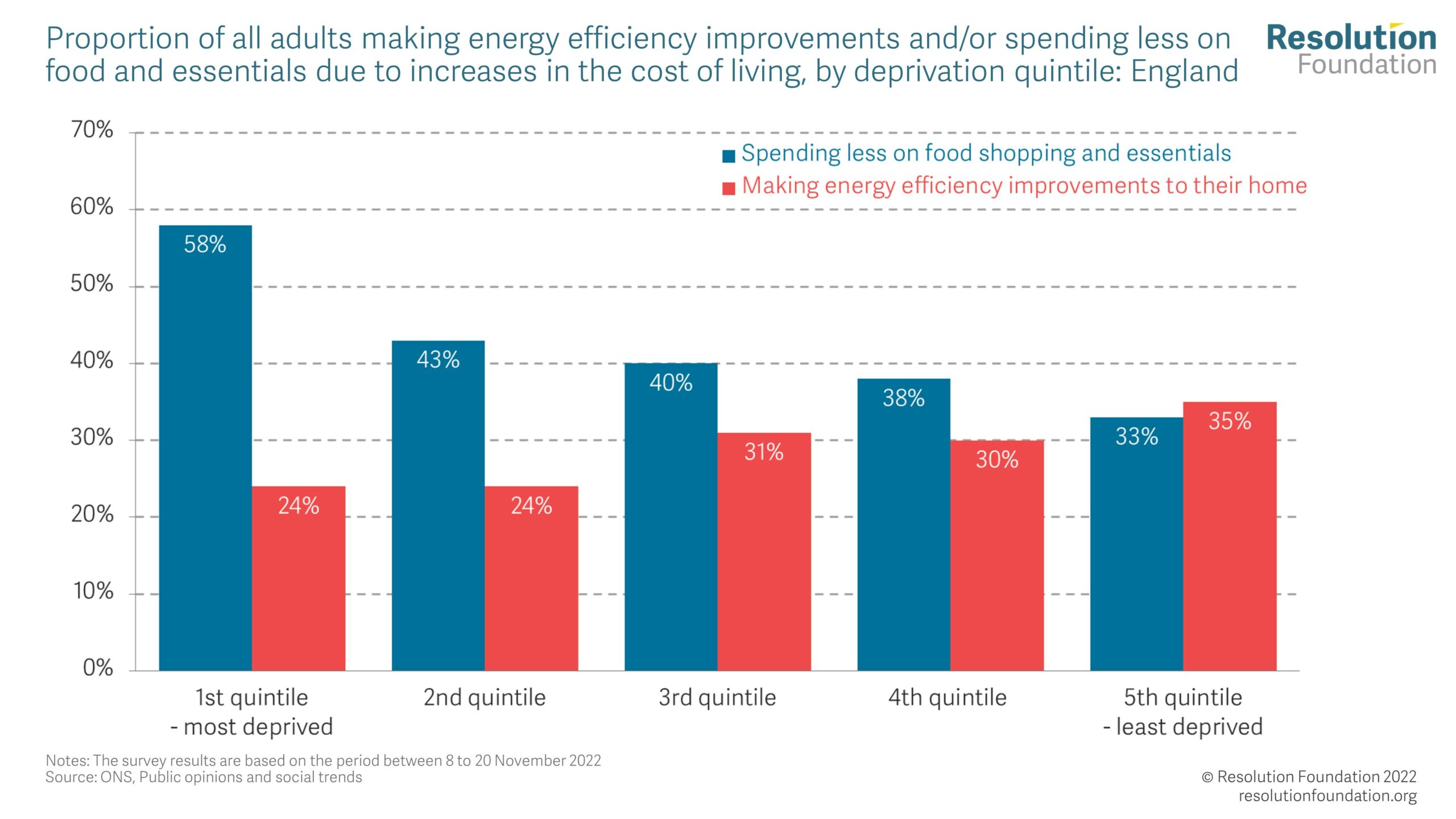