The skills and qualifications held by the British workforce have come under increased scrutiny lately, tied as they are to the Brexit-related migration debate. Some have argued that ‘turning off the tap’ of migrant labour will cause immediate, and substantial, recruitment difficulties for firms. Others maintain that reduced levels of migration could compel educators and employers to put renewed focus on upskilling UK-based workers. Regardless of whether you view Brexit as a skills-related challenge, or an opportunity, now seems a good time to stock of where Britain is on educational attainment, and where we might be heading. 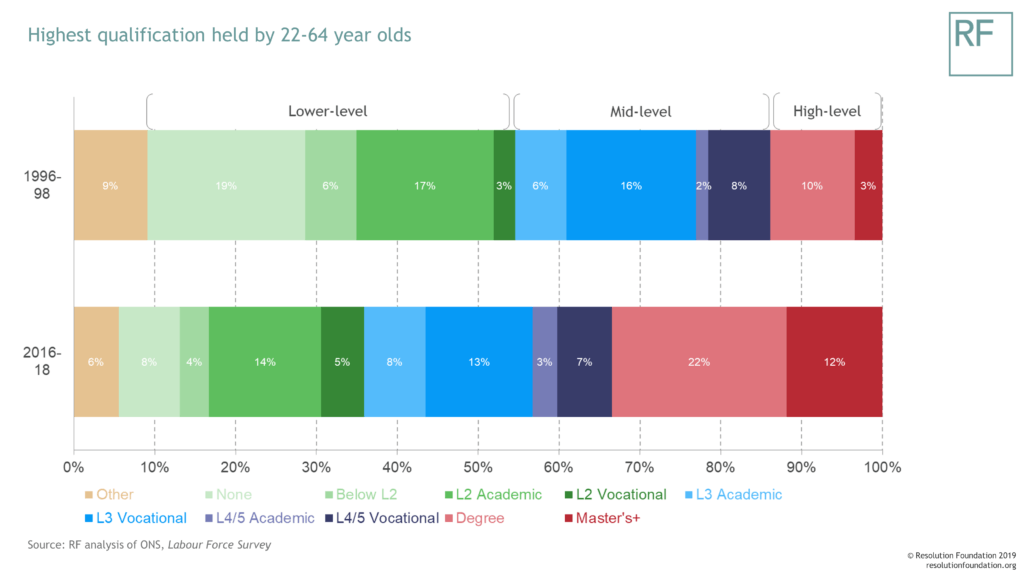 Importantly, educational attainment growth has not been limited to particular groups. While the wider 25-28 year old degree attainment rate more than doubled from 17 per cent in 1996-98 to 40 per cent in 2016-18, each of the gender and ethnicity groups shown in Figure 2  experienced at least a 17 percentage point rise in the share of their populations that held a degree. Moreover, there appears to have been erosion in many of the gaps that existed between groups during the 1990s. 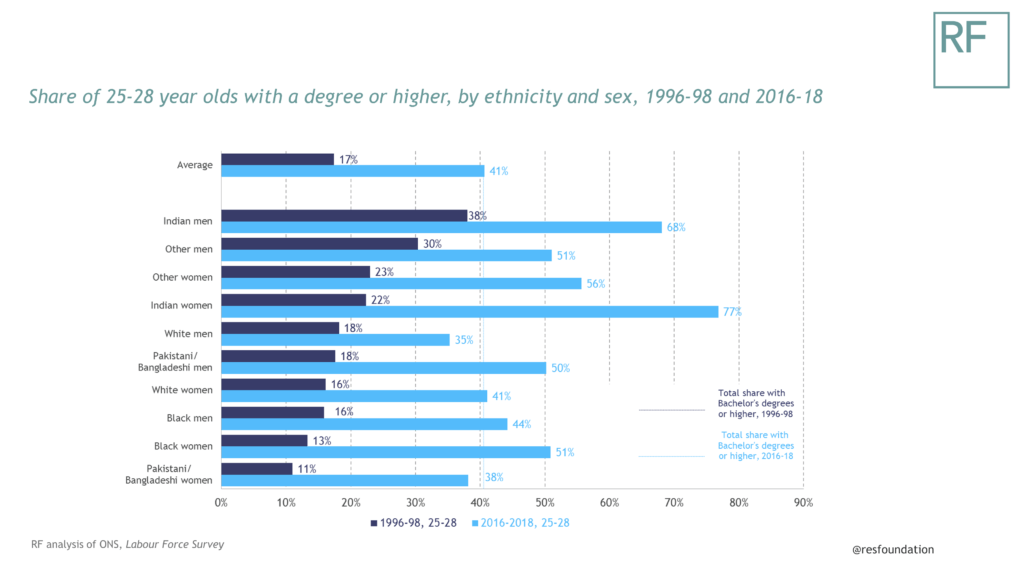 The class-based gap in Bachelor’s degree attainment appears to have waned for younger cohorts, suggesting that inequalities in access have narrowed over time. Significantly though, this pattern does not extend to Master’s level and above. As degrees have become the ‘new norm’, individuals from advantaged backgrounds have differentiated themselves by seeking out higher levels of attainment. 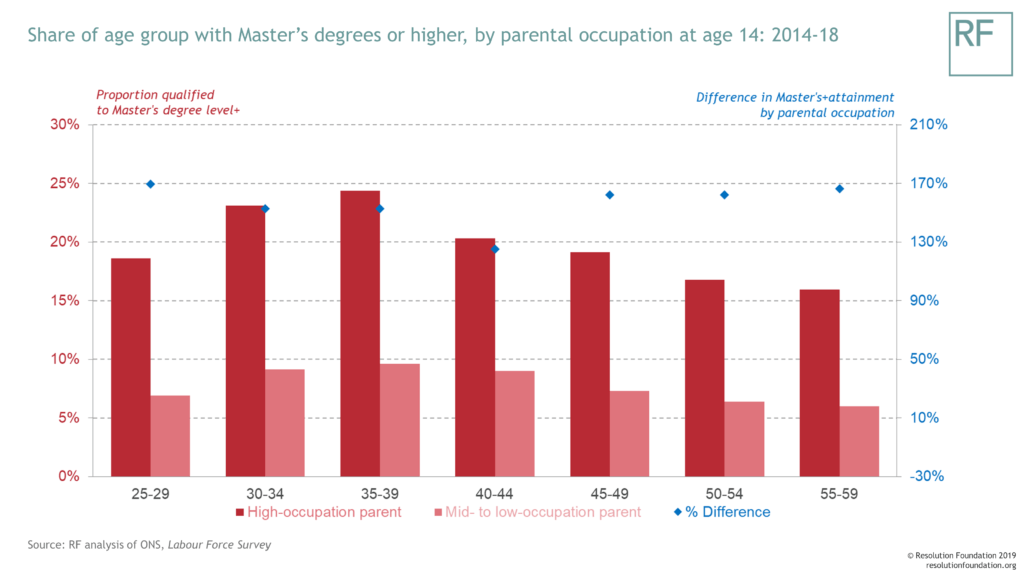 There are also clear regional gaps: the degree attainment rate among 25-28 year olds in South Yorkshire during 2016-18 (30 per cent) was just below the degree attainment rate in inner London a full 20 years earlier (36 per cent). In fact, the regions which experienced the largest percentage point growth in the size of their young degree-holding populations were those that began the period with an above-average share. Those that started out behind the pack have struggled to make relative gains. 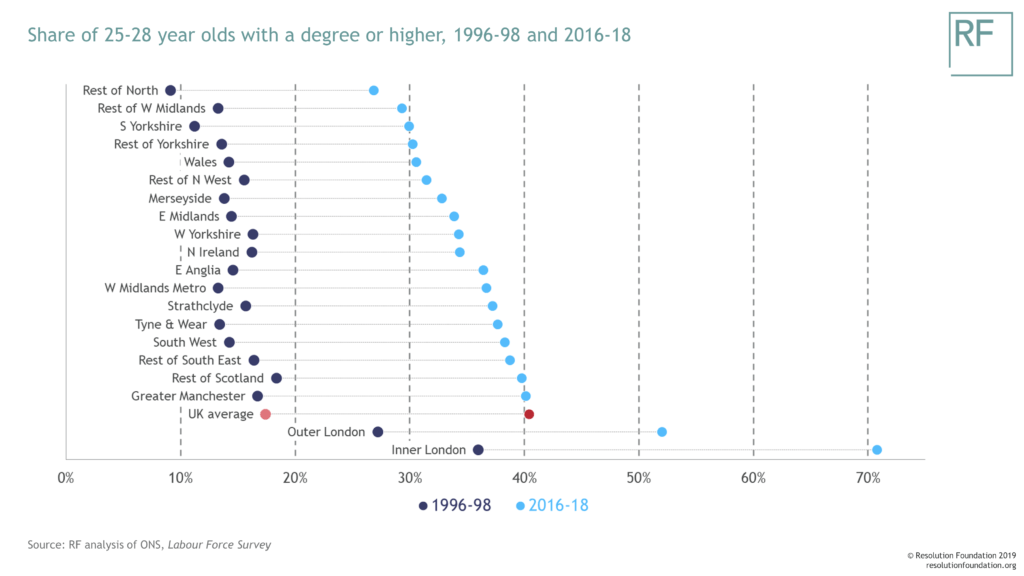 Closing these geographical and class-based gaps would require continued overall attainment growth, targeted at those most in need. Instead, however, we’ve experienced a marked attainment slowdown. During 1997-2003, average year-on-year growth in the share of young people with higher level qualifications (Bachelor’s degrees and above) grew by 1.8 percentage points, while the share of younger people with lower-level qualifications reduced by 2.3 percentage points year-on-year. 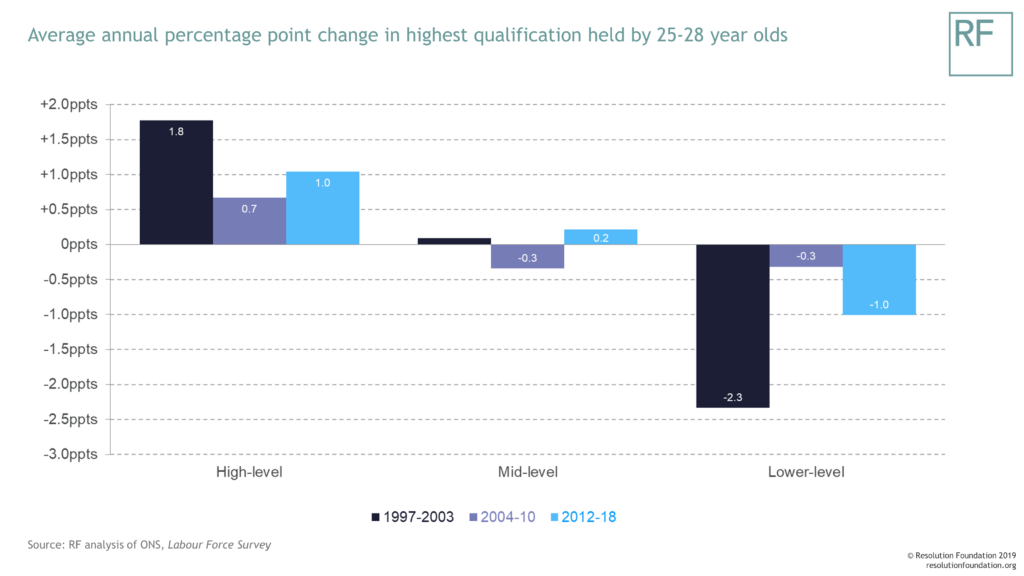 From 2004-10, however, the average annual increase in higher-level attainment fell to 0.7 percentage points. Even more significantly, the reduction in those with GCSE and lower qualifications fell to just 0.3 percentage points. These rates of change have since improved slightly, but remain just over half the size of 1997-2003 levels.

Could the correlation between the timing of the attainment slowdown and the EU’s 2004 expansion be linked to the post-2004 boost in migration? It seems not: Figure 6 compares average year-on-year changes in attainment both with and without migrants who came to the UK during each time period included the analysis. It finds little difference between the two. If anything, between 2012 and 2018 the inflow of migrants may have slightly masked the extent of the qualifications slowdown. 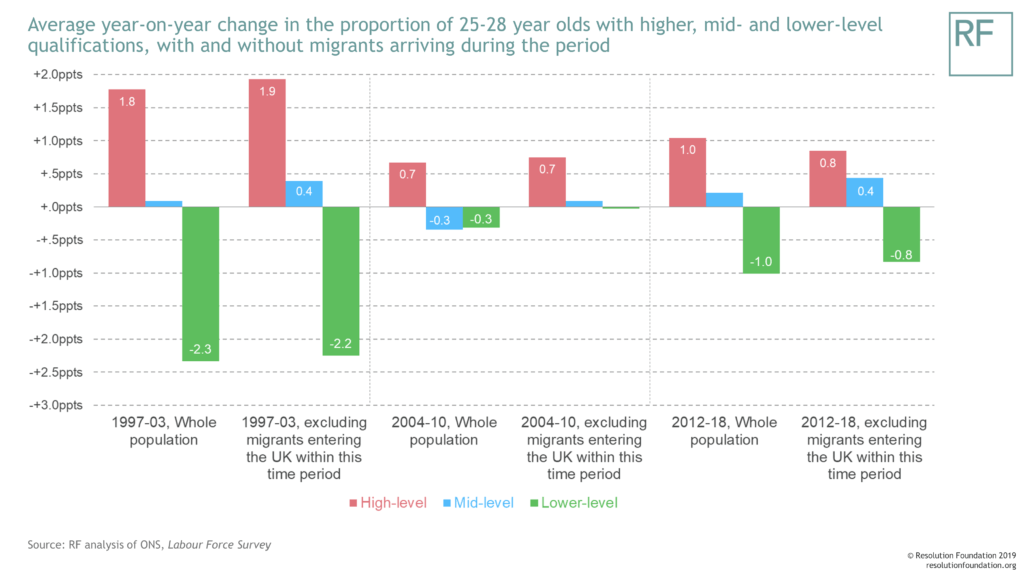 This slowdown is worrying for a number of reasons. One in four young people still enter their mid-to-late twenties with lower-level qualifications. Moreover, employers have indicated that the current labour supply doesn’t always align with their needs: in 2017 the Employer Skills Survey found that 22 per cent of vacancies went unfilled for skill-related reasons. Although these findings should be interpreted with caution, our analysis suggests there could be a demand for both more higher-level academic qualifications, and a range of mid-level technical qualifications.

Attention to skill shortages has been renewed within the context of Brexit. While we cannot extrapolate from current trends the effects that reduced migration would have on different sectors, we can highlight areas where short-to-medium term recruitment difficulties could emerge. Figure 7 shows eight roles with at- or above-average skill shortage densities and above-average migrant employment shares, in which more than four-fifths of new starters earn below proposed migration salary thresholds. 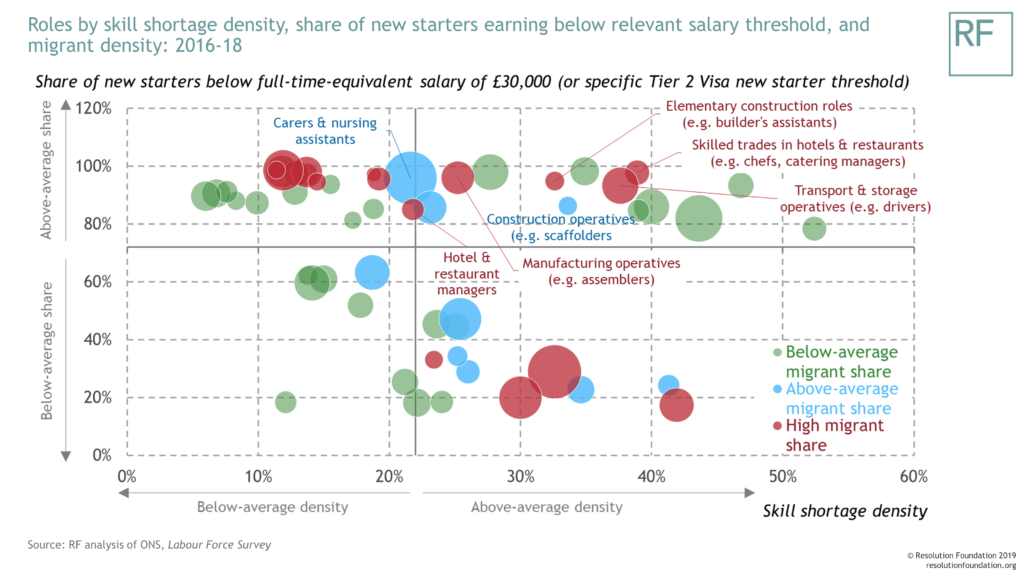 Most of these roles don’t appear easy to move offshore – suggesting that proposed changes to our migration regime post-Brexit could initially amplify pre-existing skill shortages in these areas.

UK employers also have their own internal skills concerns. During 2017 employers reported that 4.4 per cent of staff were not fully proficient in their roles – in other words, they had a ‘skill gap.’ Like skill shortages, these skill gaps should be taken with a pinch of salt. Unlike skill shortages, however, they are correlated with qualification levels. While training is usually skewed towards the already highly-qualified, roles that typically require lower-level qualifications yield a higher share of skill gap complaints.

Moreover, employees in roles that are said to suffer from an above-average level of skill gaps receive less frequent training than their counterparts in roles with a below-average level of skill gaps – a pattern extending across the qualifications scale. Employers appear to be compounding their own problems – offering less training to the roles which, purportedly, give them the biggest headaches. 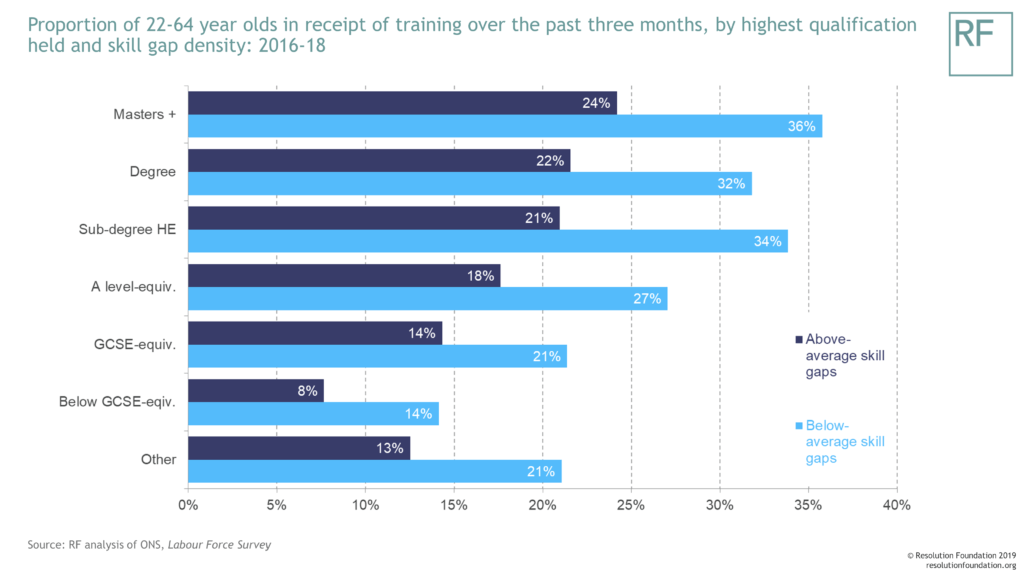 These challenges, whether they relate to closing attainment gaps or encouraging employer-investment in staff, do not depend on the outcome of Brexit. They’ve been with us before, and they are going to persist after. But they are important: the time to pick up the pace on skills and education is now.