Today is impressively managing to combine the (inevitable) end of the V-shaped recovery, with the overdue catching-up of policy with local lockdown reality. At 7am we learnt that GDP grew by 2.1 per cent in August, down from 6.4 per cent in July and 9.1 per cent in June. Almost all that growth came from the hospitality sector that we’re now partially shutting back down. And this afternoon the Chancellor will be announcing plans to turn the (not even started yet) Job Support Scheme back into a targeted version of the Job Retention Scheme for businesses directly closed by the coming new wave of restrictions. That is 1) sensible 2) long overdue.

Despite the history books telling us that this kind of global pandemic and its economic effects don’t just go away, we’ve refused to learn that lesson. We now face a painful phase as policy makers’ hopes hit the brick wall of reality.

If you’re in a local lockdown this weekend, our thoughts are with you. If you’re not, don’t feel left out – you’ll probably be there soon enough.

Homework marking. In the past decade we’ve all got used to the idea of central banks using Quantitative Easing (QE). But how much impact do we think it has? What answer you get depends on who you ask is the conclusion from wonderfully provocative research (summary) examining 50 different evaluations of QEs impact on growth/inflation. The key finding is that central banks themselves consistently find much larger effects of QE than academic economists, though they note that all types of researchers generally find some positive impact. The only central bankers who find smaller affects than the academics? The Germans, who – surprise surprise! – hate QE.

Good computers. Having done some central bank bashing, it’s only fair to offer some praise for this great Bank of England staff blog that examines whether machine learning can help us predict looming financial crisis. Once you get past the bad joke that such crises are as rare and hard to predict as a Kraftwerk album, you’ll find that the answer is yes – and quite impressively so. Examining 50 crises, across 140 years, the computers predict almost all crises up to two years ahead – and does significantly better at doing so than traditional economic approaches (regressions, for the geeks out there). The warning signs of a coming crisis? Fast credit growth, particularly when it gets relatively cheaper to borrow in the short than long term. So, whatever your view on Kraftwerk, it is time for some computer love…

Long loans. Normally a PM’s party conference speech would be the biggest news of the week. Nothing is normal these days, but it’s polite at least for you to watch/read Boris Johnson’s effort. Leaving aside his choice to largely ignore current pandemic traumas, it’s actually quite instructive about the challenges facing modern conservatism. You get activist-friendly messaging about the current huge expansion of the state being totally exceptional – with promises that we’ll be getting back to the good old free market days soon enough. But when it comes to the public facing policy promises? It’s bigger state here we come – spending promises from social care to education, combined with the semi-nationalisation of the mortgage industry. The latter plan to see the widespread availability of long-term fixed rate mortgages has attractions, as covered in the original proposal from the Centre for Policy Studies. But the proposal to make this happen? Appoint a Minister to encourage it. That’ll have precisely zero affect. If you want long-term fixed mortgages at a price that means people will use them you’ll need government guarantees or subsidies. So Boris = big state for some time to come.

India divided. It’s always great to read a long blog on something you know nothing about. So I highly recommend reading this analysis from Alice Evans (podcast) on large differences in measures of gender equality (on everything from survival, literacy, autonomy and mobility) across India. I can’t possibly do justice to her discussion of the root causes of these gaps that see women in Southern and North-eastern India more likely to be educated or to choose their own husband, but she argues against simple ideas of higher incomes driving better gender outcomes, instead highlighting the deep roots in cultural norms and forms of food production.

Taxing lefties. Busy with the pandemic? You may have missed a growing debate on the left about tax. In olden times, the left generally liked higher taxes to pay for stuff like the NHS/redistribution. But a new breed of leftism is out there thinks this falls into the evil neoliberal trap of believing that spending needs to be paid. Foolish mortals need to understand that the central bank can just print money for the government to spend it argues. Now while there are micro elements of this Modern Monetary Theory argument that are right, its big picture conclusion is what you might politely call garbage. The reasons why are well set out in an article by Jo Michell in the not exactly neoliberal Tribune magazine. He rightly notes that tax has important roles in determining how, and by whom, our scare economic resources are consumed. As one response to Jo’s piece notes, eventually, not caring about tax, gets you financial instability, a stuffed currency and, if you really try, some inflation.

The impact of the covid crisis on you depends a lot on where you work, where you live, ethnicity and, most obviously, your age (as we’ve detailed in a new 150-page, 78-chart generational audit of this crisis). Your age is a big driver of how much health and/or economic risks the pandemic poses to you. Chart of the Week brings those issues together, by highlighting a truly alarming increase in people experiencing mental problems. This increase has been sharpest among young adults (up 80 per cent since 2017-19), who – while being least at risk mortality-wise – are most likely to be affected by the economic and social fallout from the crisis. But there has also been an alarming increase among 65-79 year olds (up 68 per cent) – for whom mortality is a real concern. The covid crisis is about far more than physical health/economics – and that it’s legacy will be living with us for years, even if a vaccine turns up soon. 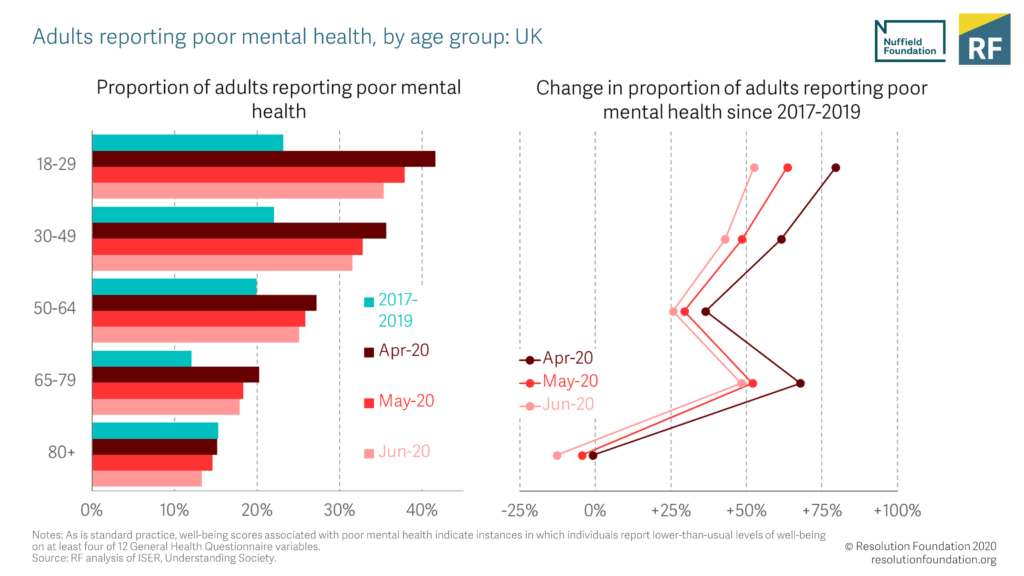