This is the week scary economic data started to join the scary health data. Daily updates on infections and deaths have reduced their shock (although not the tragedy), but we have never before heard news of almost a million people making new benefit claims in just two weeks. At five times the rate of new claims made during the financial crisis peak, this is an economic and human catastrophe. And it shows how crucial the Coronavirus Job Retention Scheme is, with almost half of firms planning to enter half or more of their workforce into it. I can’t even imagine the increase in unemployment without it.

So, as this health trauma turns into an economic one, let’s add the unsung heroes of the DWP processing these claims to those we thank. They are overworked, undervalued, and on the front line of tackling our living standards crisis, with a huge responsibility to get cash to those in need as quickly as possible.

Now this week also marks the 100th edition of TOTCs over the past two years. We thought it was about time we lived up to the email’s name and actually crowned a top chart. We’ve looked back at the many charts we’ve shared with you over that time, and selected a shortlist that have something to teach us about the Britain that goes into, and will hopefully soon emerge from, this crisis. Now it’s over to our email subscribers to vote for your favourite/most important chart – so next week we will reveal which really is Top of the Charts.

Have a good weekend everyone, and stay safe.

Cast your vote by accessing this email online.

Crises happen. We never know exactly when a crisis would hit, but we do know they turn up. The 2010s turned out to be the first decade since the WW2 without a recession. But, as this chart from 26 April 2019 showed us, policy makers should never have taken that for granted. In fact, in a twist of fate the number of consecutive years of GDP growth post-financial crisis was exactly the post-1974 average before another big crisis hits. That doesn’t mean we had it coming. But it does mean not enough planning was done for how we would handle the next crisis before we have ended up living through it. 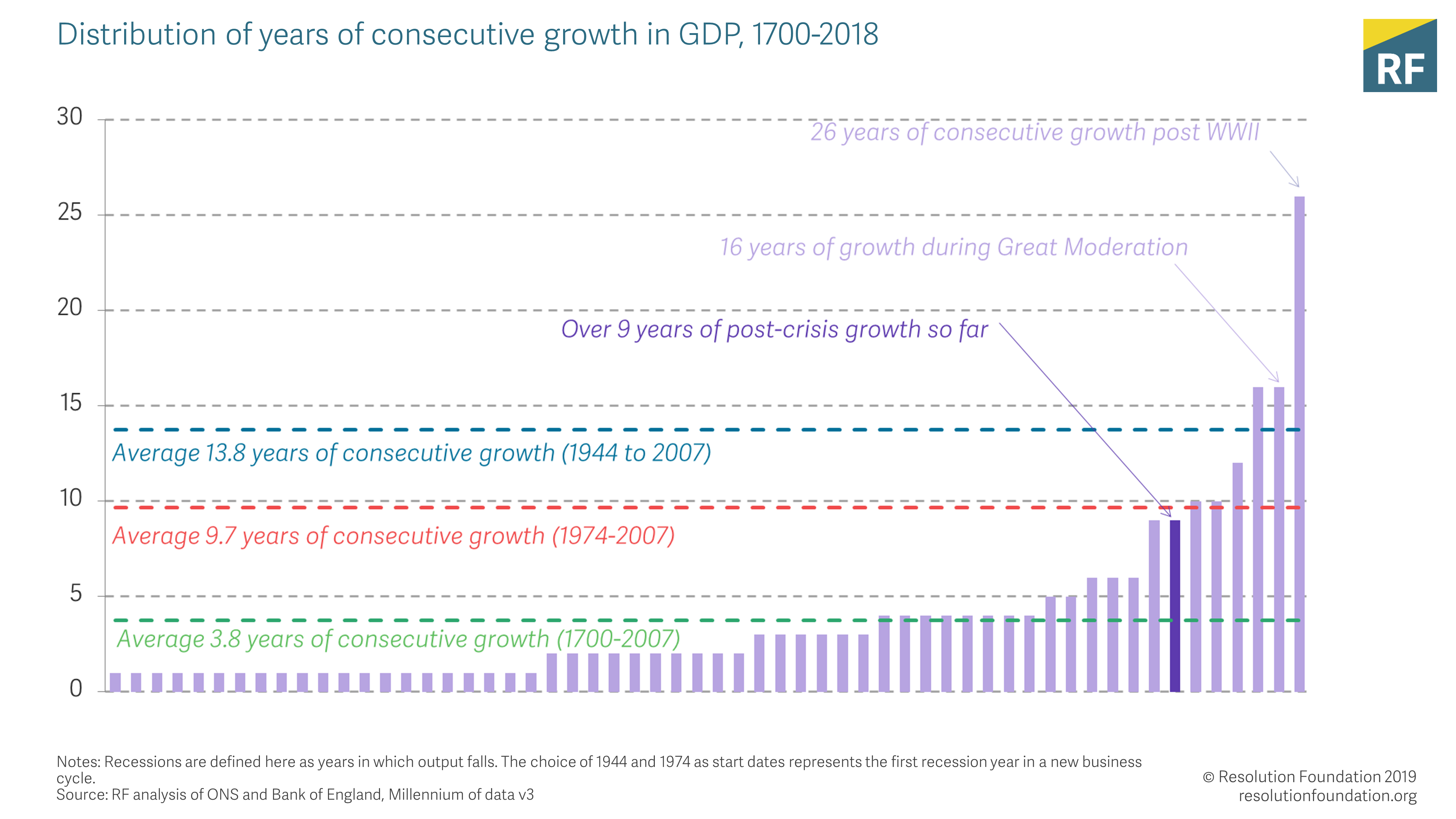 We head in after a rough decade… The financial crisis feels like a long time ago. But it’s also ever with us. It’s certainly ever-present in our living standards where, as this chart from 6 March shows, our incomes have only inched back above the levels seen before the crisis. Indeed, as we learnt last week, typical incomes after housing costs saw no growth in 2018-19, leaving them below the level seen two years ago (in 2016-17). Crucially, this is because the huge living standards hit of the financial crisis has been compounded by high inflation and weak pay growth after the 2016 referendum. This coronavirus crisis is, in this sense, the last (we hope) in a trilogy of living standards hits. 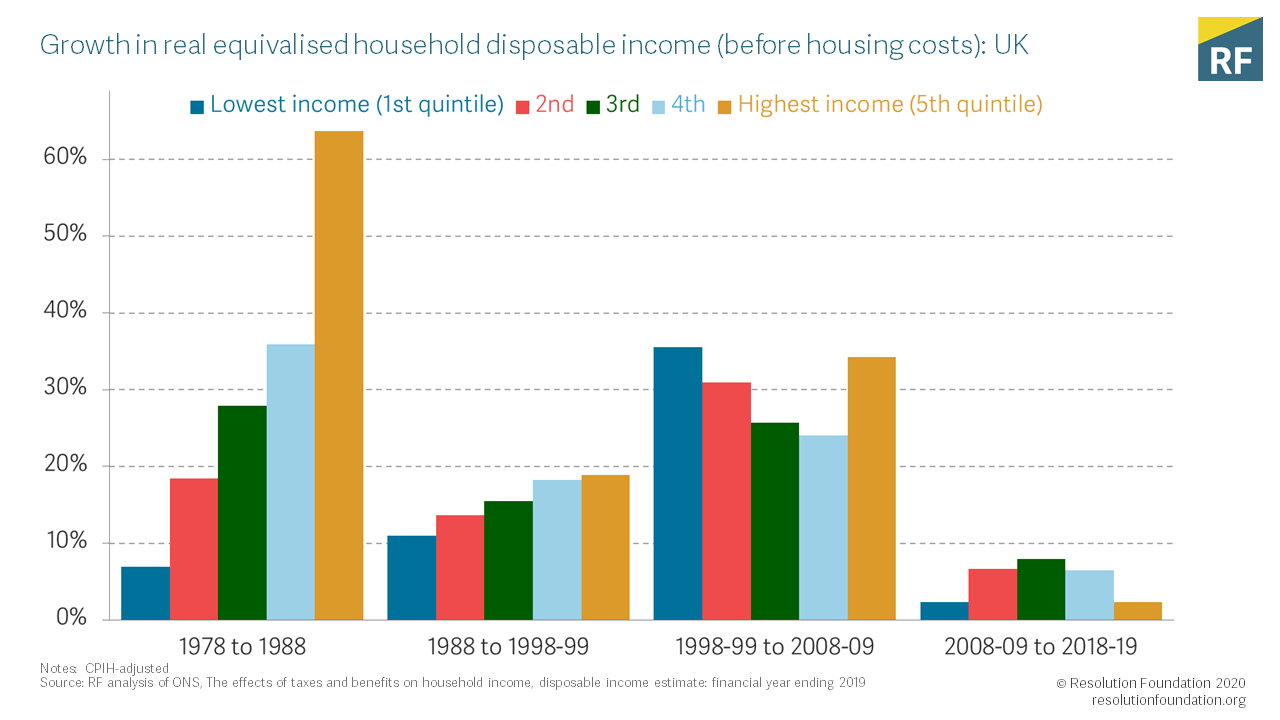 …with recent years being particularly bad for the poorest households. While everyone has had a pretty bad past decade, the past few years have been worst for poorer households. The bottom fifth of the population saw their incomes fall last year, for the second year in a row, leaving them lower than they were in 2014-15. In large part this is because, as the chart below (originally from 15 March 2019 but since updated) shows, the post-2015 phase of austerity has been very focused on stripping back the generosity of the social security safety net. It has taken this unprecedented crisis to start putting that into reverse, with the Government announcing a £7bn increase in welfare spending in recent weeks. 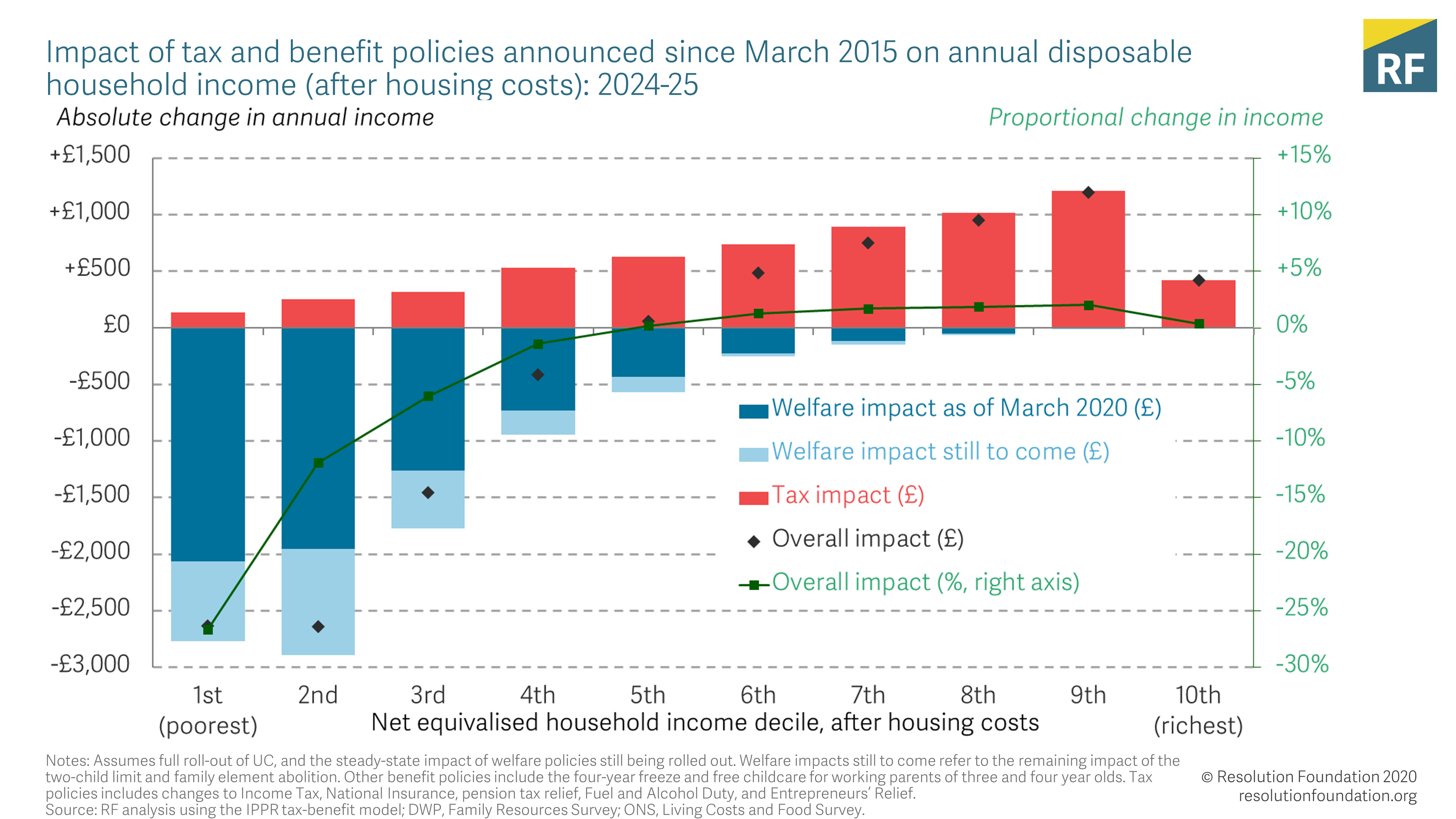 We’re seeing an unprecedented economic response. We’ve never seen a crisis like this, and we’ve never seen an economic response like it either. As last week’s chart shows, the state is now underwriting 80 per cent of many people’s incomes. The generosity compared to those relying on Universal Credit (even after the Chancellor’s big and welcome increase in generosity) stands out, which has made the cliff edges for entitlement hard for those excluded from the wage/income subsidy schemes (those who started work after 28th February for example). How these huge schemes are delivered, adapted, and eventually closed down, are central questions for economic policy makers in this crisis. 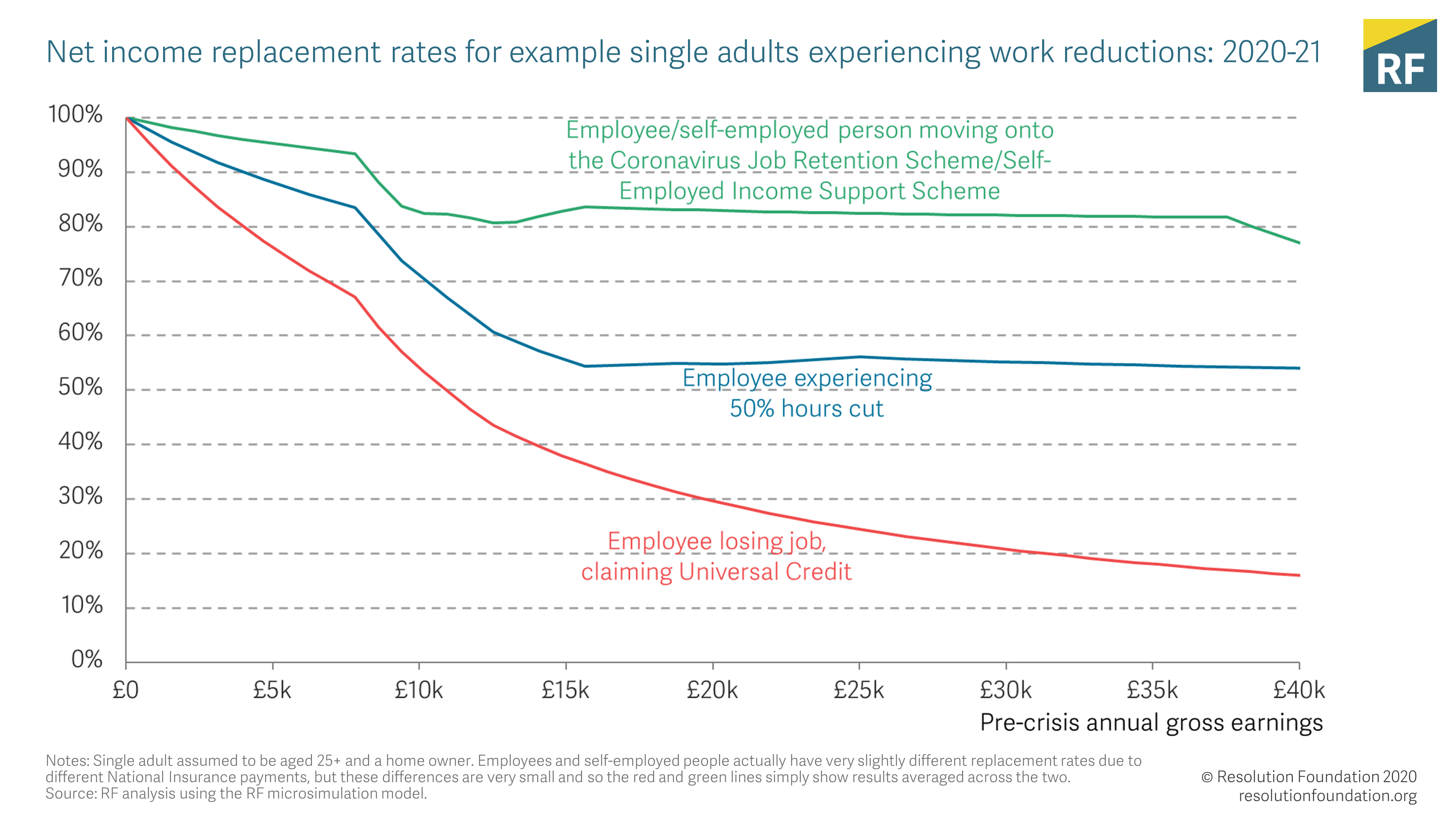 An austerity repeat won’t be possible… the government’s approach to economic policy pre-crisis was to increase spending as much as they could without having to raise taxes. That option no longer exists. That’s because a) their policy in this crisis is (rightly) to let borrowing rip as tax revenues fall, and socialise the economic cost of this crisis from households to the state and b) there will be long-lasting impacts on the size of our economy and health of our public finances. Some will worry that means a return to George Osborne style spending cuts is on the cards, but that option is simply not available either economically or politically. That’s because the cuts over the past decade have been so unprecedented (as the Chart from 3 January 2020 shows) and the level of need in our public services is so great. 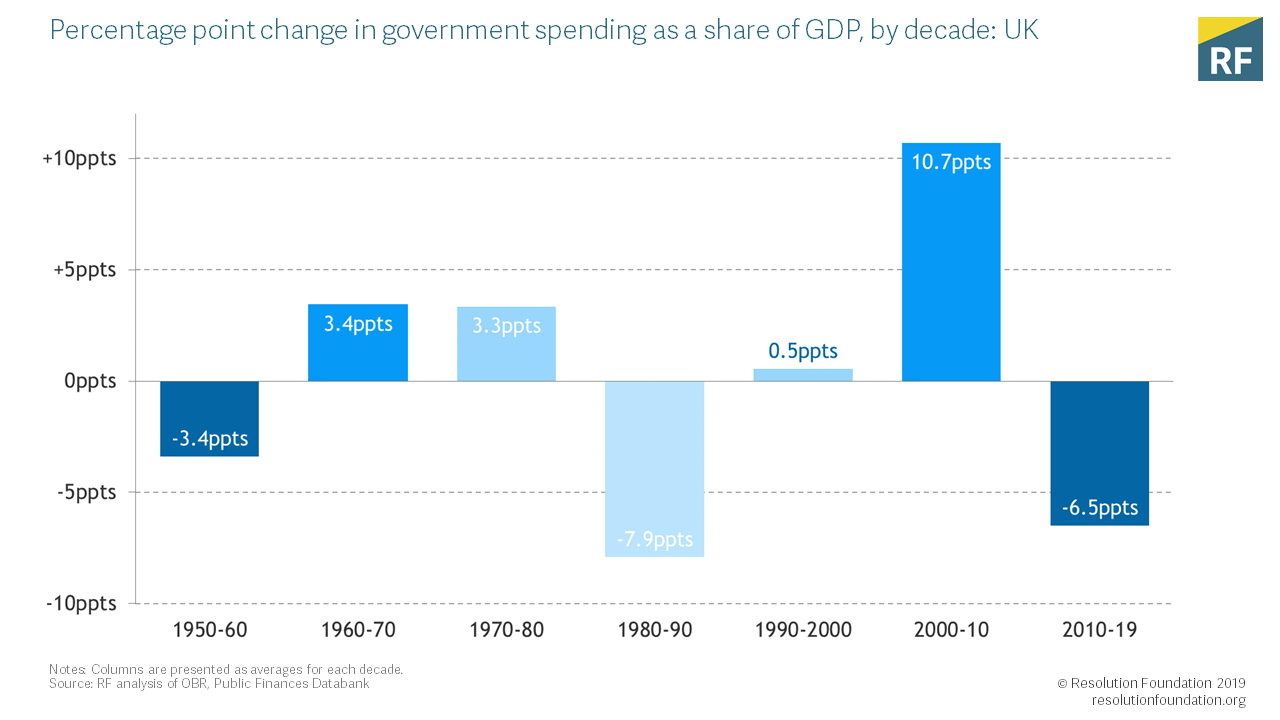 …taxes will rise. No consolidation should come until we are out of this crisis, but it will come eventually. And when it does tax rises are going to be doing the work they conspicuously didn’t do post-financial crisis. Some will say that the tax to GDP ratio is already heading back to its highest since the 80s, so taxes simply can’t go up. The answer to which is 1) an ageing society means the tax take is simply bigger over time 2) our tax take during the 80s and 90s was artificially low given our spending as the state ran down it’s assets 3) actually the total tax paid by households relative to their income has if anything fallen over time, from around 37 per cent in the late 1970s to 34 per cent recently. Part of this is successive reductions in income tax shown below (see original TOTC here). 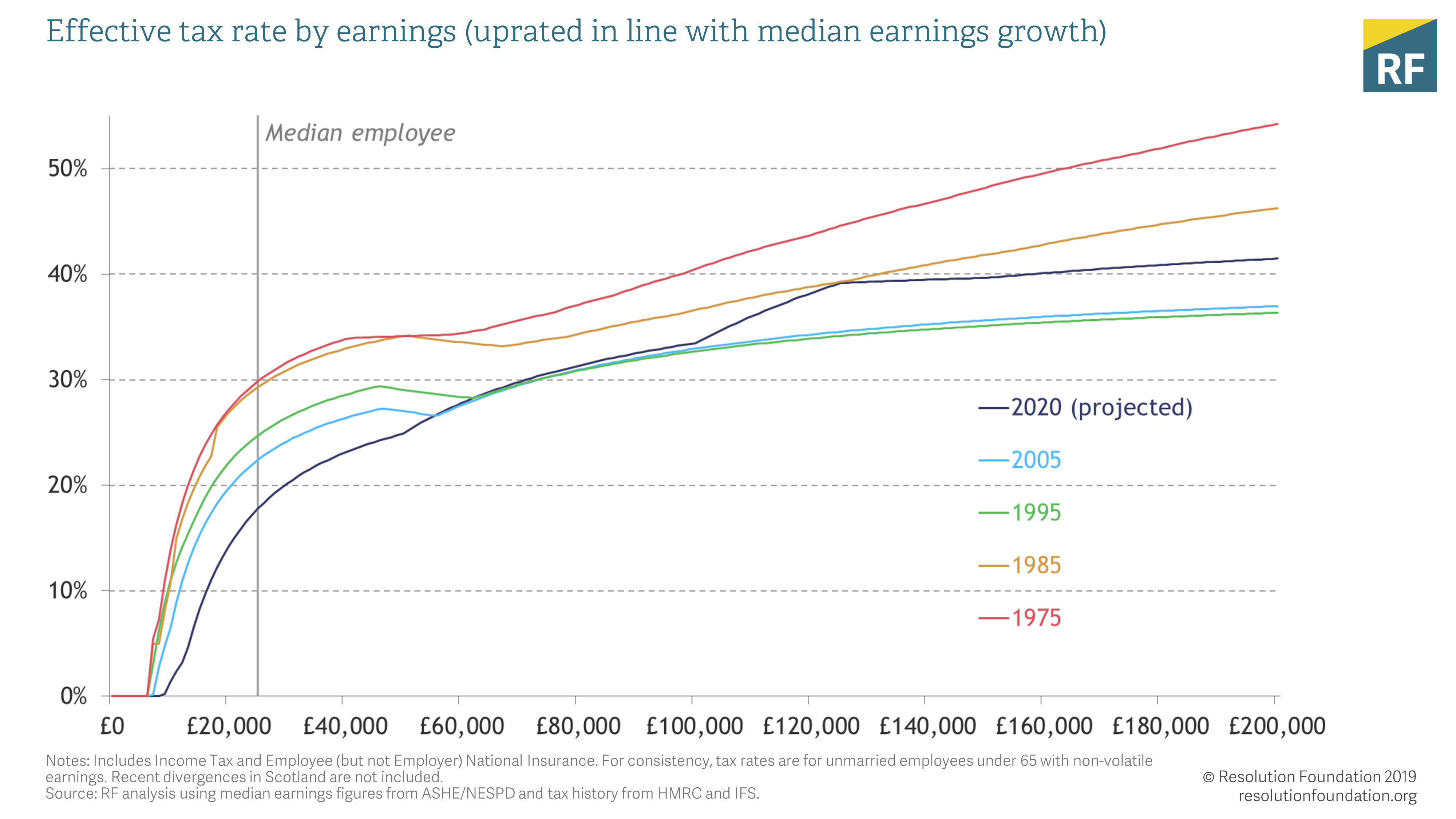 …but migration-driven changes to the economy may accelerate. Even before this crisis migration for working in the UK was falling, with EU worker numbers coming down and the increases from the rest of the world being driven by increases in those coming to study rather than work (as shown in the chart below from 28 February). The Government’s proposed new migration regime would bring a hard stop to migration for almost all lower-paid roles, but the nature of this crisis has delivered an even harder stop to all migration. Initially this huge change is only being felt by those migrant-reliant sectors still open (hello fruit picking). But as our economy reopens, the scale and speed of the change will be felt more broadly. We’re on course for a lower migration future. 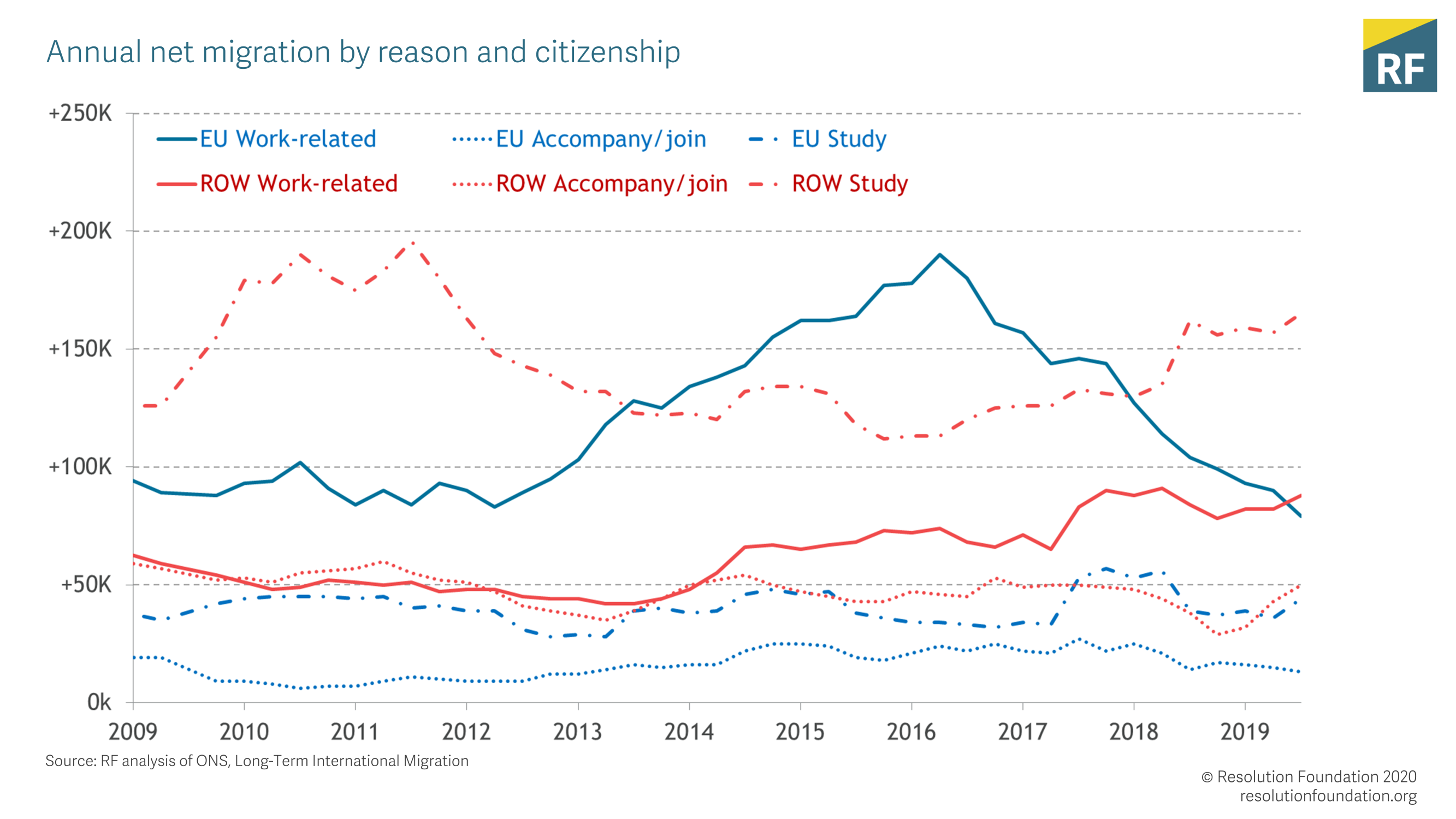 Retail’s decline risks being turbocharged. Retail has been declining as a share of employment since the turn of the century, as we showed back on 20 September 2019. This isn’t just about Amazon – it’s also about us spending our margin pound on doing things rather than buying things. Much of the sector has been in managed decline for a number of years, but for businesses already in trouble there will be no managing through this crisis. Brighthouse is just the latest high-street name to go under this week. On manufacturing the impact is far less clear, but it’s possible that the crisis reinforces the slowing or ending of the decline in manufacturing jobs in so far as it encourages firms to have shorter supply chains. Time will tell. 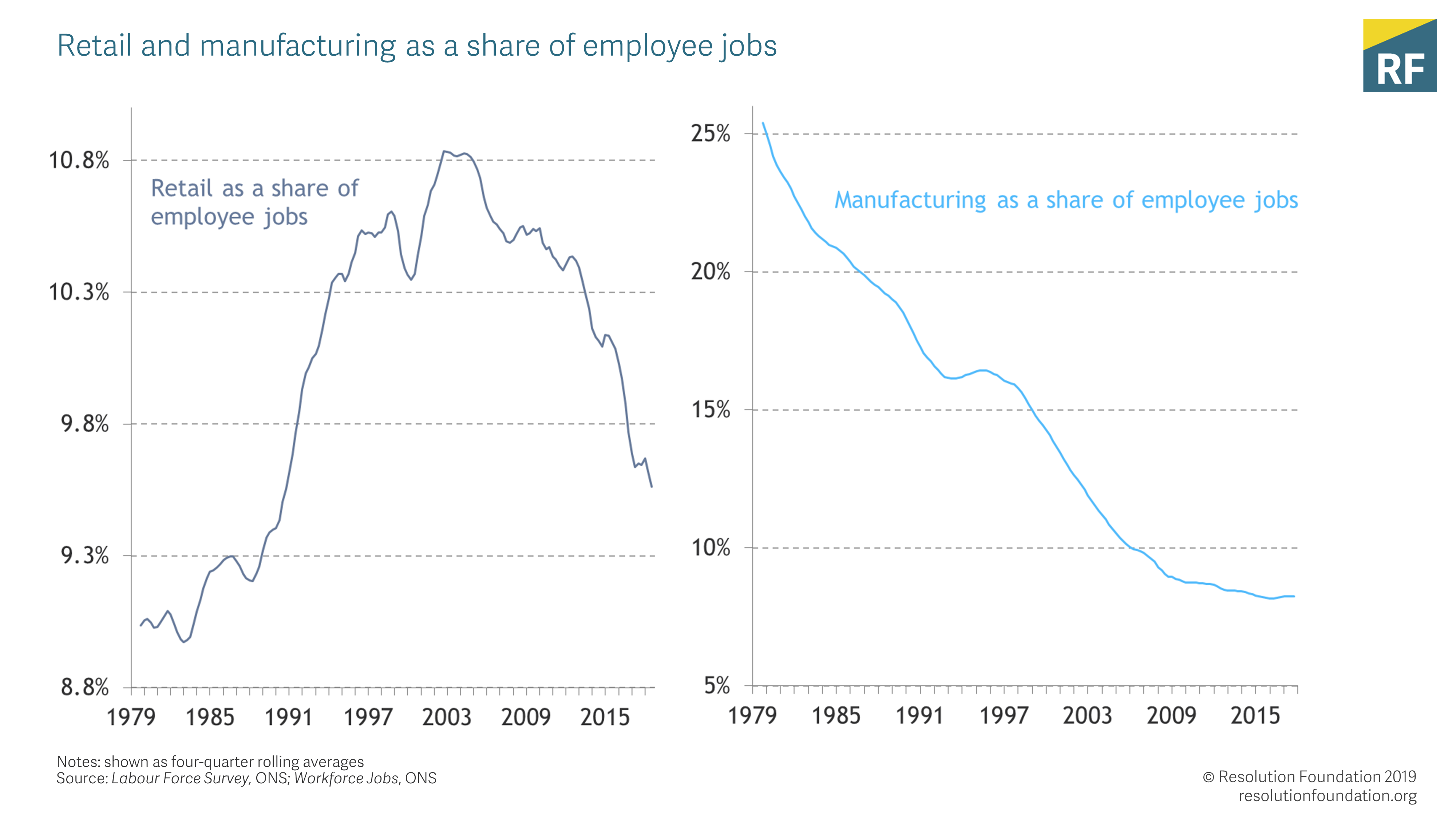 Talking generations The coronavirus is very uneven in its impact on different age groups – being far more dangerous for older generations. But one thing we know with quite a lot of certainty is that this economic crisis will leave it’s mark most significantly on the young, and specifically on those entering the labour market in its midst. We can still see the huge impact of the financial crisis on the pay of those who started work its midst, with today’s 30 somethings bearing the scars with lower pay than their predecessors. The danger is this reinforces the longer term shift of income and consumption. As we showed back on 25 January 2019 last year, older households spend more than younger ones despite the myth of millennials being the big spenders/avocado eaters. We should be alive to the fact that this crisis may well reinforce the living standards challenges of younger generations in the years to come. 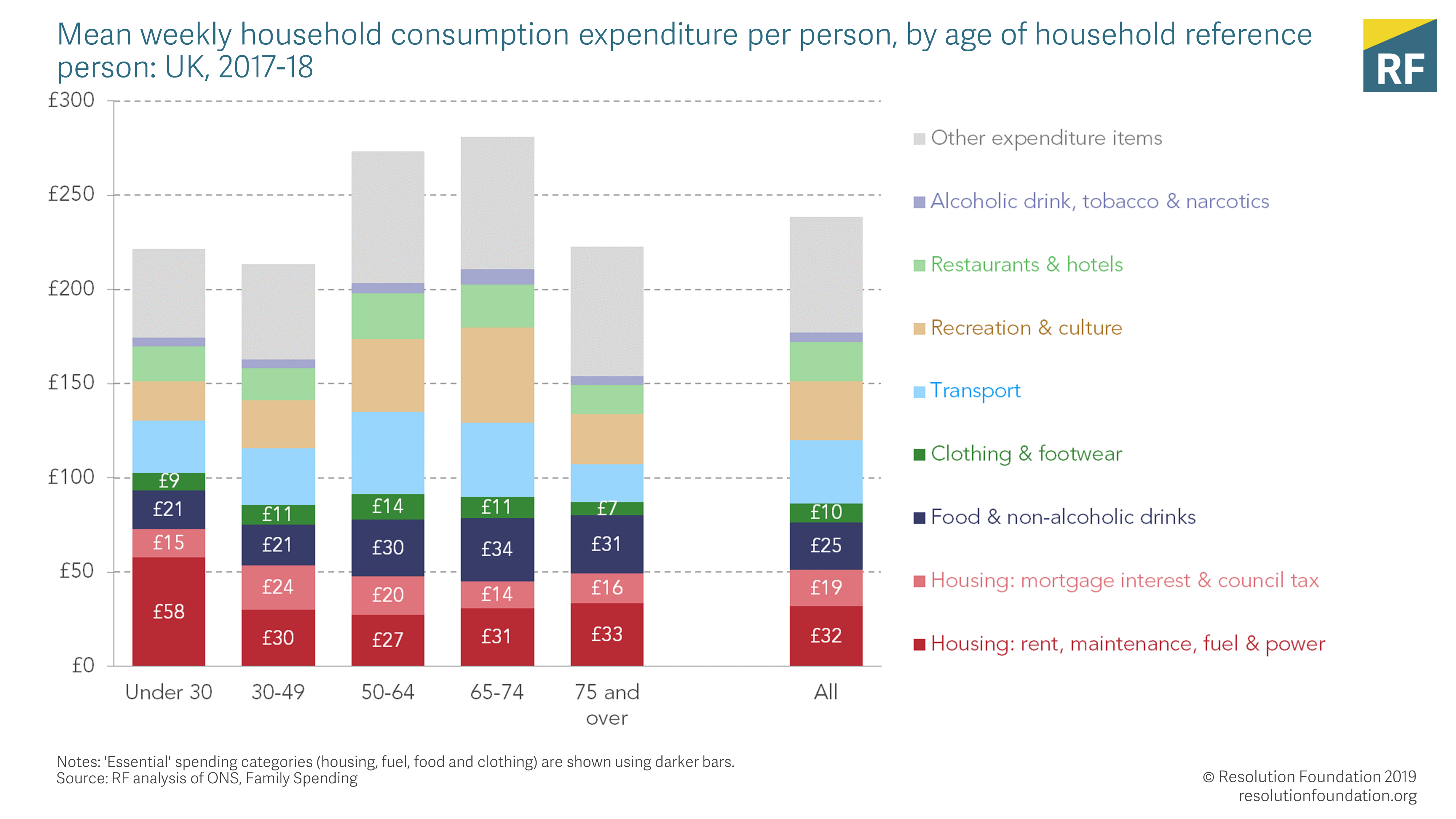 The hope bit. I warned about wishful thinking earlier, but here is some to finish. While in economic terms this crisis is actually nothing like a war (we’re shutting down our economy rather than trying to run at max capacity), it shares one key aspect: shared sacrifice, as we ask everyone to come together, restrict their liberty and reduce many of their incomes to help save lives. And one thing history shows is that it’s only really after periods of shared sacrifice in war that significant reductions in inequality take place (see The Great Leveler by Walter Scheidel). We have failed to make any material dent in inequality since its surge in the 1980s as this chart (also from 20 September 2019) shows, but maybe the experience of being all in this crisis together, with low earners so clearly hit hardest, means that the years ahead will be different from those past. Here’s hoping. 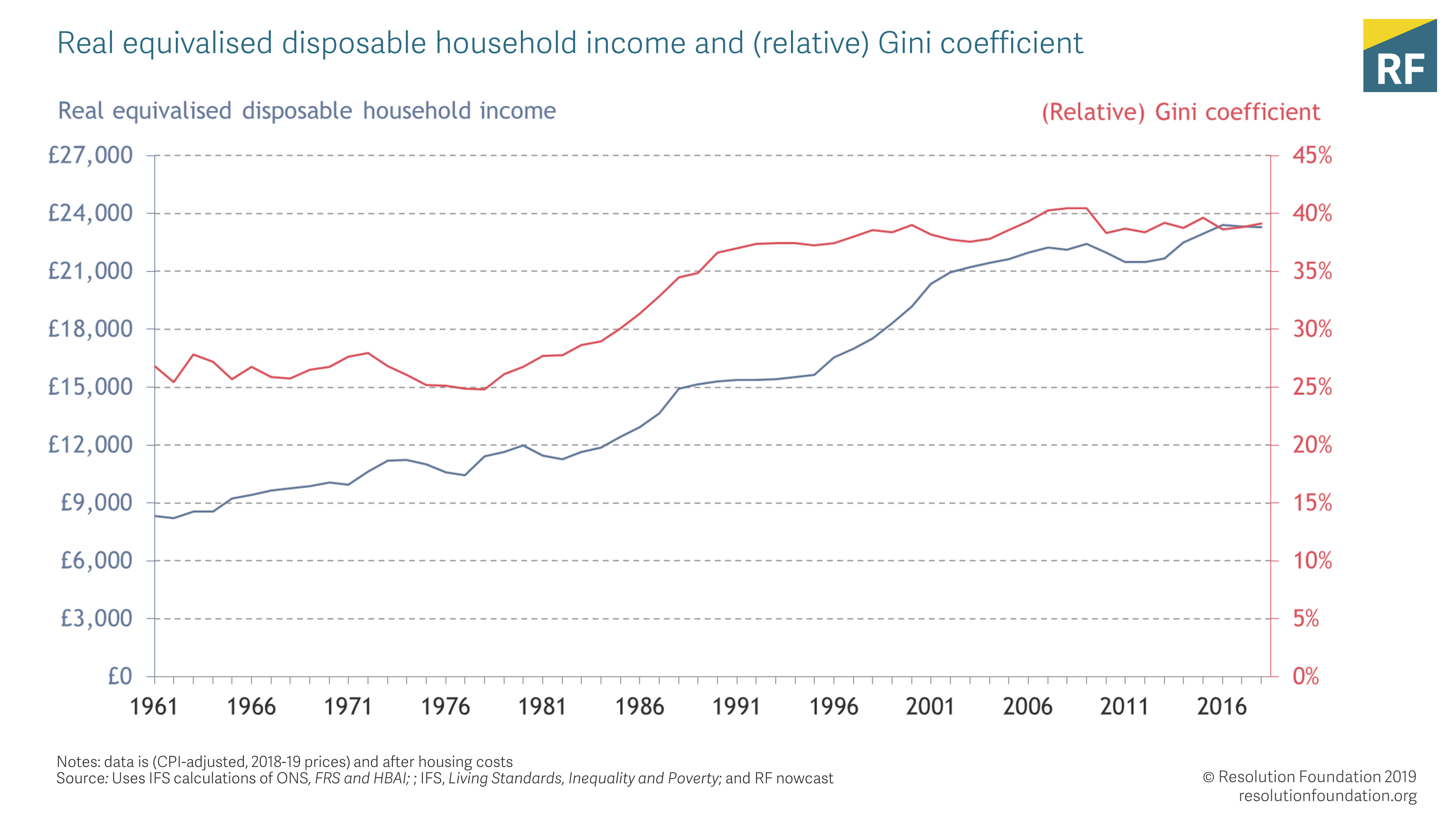