One operation and a whole world of painkillers later… I may not be making it out of the house but TOTCs can make it to your inbox.

As this is the week the election campaign officially kicks off we thought we’d focus on the economic context that it’s taking place within. People used to say elections were about “the economy, stupid”. But I’m more worried this one may, stupidly, ignore the economy.

Austerity might be over. But a tough domestic and global economic environment certainly isn’t, and that’s the context through which the next government will be navigating – as the reflections below from myself and RF Research Director James Smith set out.

Perky pay is the good news for the Conservatives. Back in 2017 it was a bold choice for Theresa May to go to the polls when pay packets were actually shrinking – as we noted at the time it hadn’t ended well for the five PMs that tried the same trick before. It didn’t end well for her either. The good news for her successor is that our record employment levels have at long last delivered a tight labour market, pushing pay growth back towards its pre-crisis average of around 2 per cent. A coincidence of timing also means that we may well see a return to record levels of pay during this election – a mere 12 years after the last peak in August 2007. 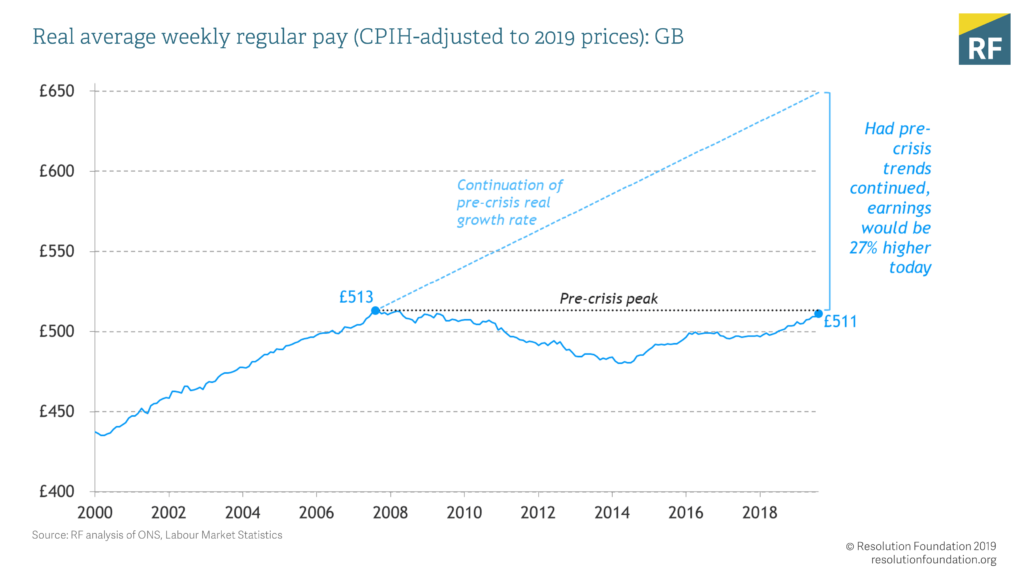 This is a major, welcome, living standards milestone. But before Boris Johnson starts wheeling out the Macmillan lines about us never having it so good, he should remember that millions of workers are still in the amidst of a pay downturn – particularly younger workers who aren’t exactly voting Conservative in droves. And just to drain a bit more perk from your half full glass – let’s not forget the big picture. The last decade’s pay catastrophe means we’re earning a massive £138 a week less than we would be if pre-crisis pay trends had continued. So let’s celebrate the return of ‘peak pay’ and a good ten months for pay growth, but recognise the task is to make up for a truly terrible ten years.

Confident consumers matter to our economics as well as our politics. Since the referendum British business has seen its confidence knocked by huge uncertainty about our future. The result has been the growth in business investment slowing and then actually falling in five out the past six quarters – far from normal for a period of economic growth.

British households were a bit more bulldog about it, with their confidence levels holding up better than the firms they work for. Higher inflation squeezed their incomes post-referendum, but they initially sucked that up by saving less and borrowing more. For consumers the economy basically is the labour market, where record employment may have kept them confident. But the context for this election is consumers definitely getting more jittery alongside businesses. 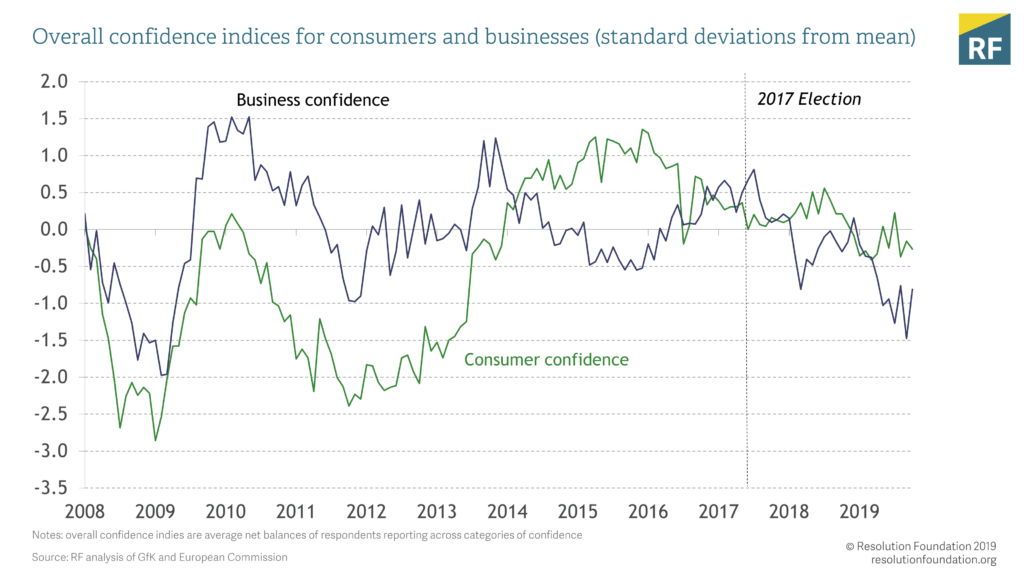 The result is that consumer spending – which had looked so resilient – now seems to be slowing, and households have returned their saving rates to pre-referendum levels. All this matters because household consumption is what has been propping up the UK economy in the past few years. If consumers join businesses in the doldrums, that could be a game-changer for the economy.

Family finances up, public finances down. Pay is up, but so is public borrowing going to be after this election. That’s what we learnt from ‘fiscal Thursday’ yesterday. It didn’t disappoint: both Labour and the Conservatives unveiled shiny, new fiscal rules, drawing heavily on RF analysis. This is important because, well… fiscal rules are important. They shape governments’ tax and spending plans, and tell us about a party’s priorities. History also teaches us that operating without a fiscal framework – as we are today – can be very costly as governments make promises they can’t afford. But that doesn’t mean all fiscal rules are about less spending – indeed the new (and improved in many ways) rules proposed are really about the parties competing on how to increase spending as we enter a post-austerity phase of political debate. Borrowing is going up after a decade of coming down. 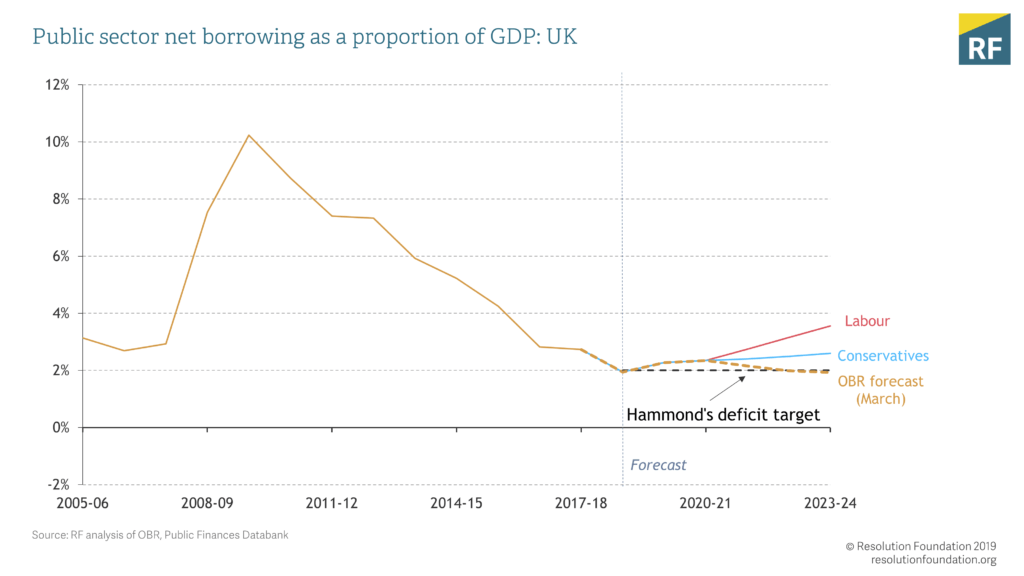 The big news was increases in investment spending (particularly sizeable in Labour’s case), but on day-to-day spending too the two parties have also set out plans that are looser than those of Philip Hammond. They’re both aiming for the right objective – paying for current spending out of current taxes. But they’re wrong to put off doing so for a few years, and wrong not to build in more headroom against inevitable shocks. Which brings us to….

Slow lane economy. It wasn’t just about fiscal action yesterday – the Bank of England wanted in on the limelight too, publishing its latest assessment of the UK economy. With the OBR side-lined by the demise of the Budget and arrival of the election (not even able to publish its tweaked fiscal update), this is the only official economic health check before we go to the polls that takes into account Boris Johnson’s Brexit deal. The Bank’s conclusion was fairly gloomy, with growth forecasts lower than the Bank forecast back in August and remaining below two per cent for the next few years. This prompted two members of the Monetary Policy Committee to vote to cut rates – something of a surprise. 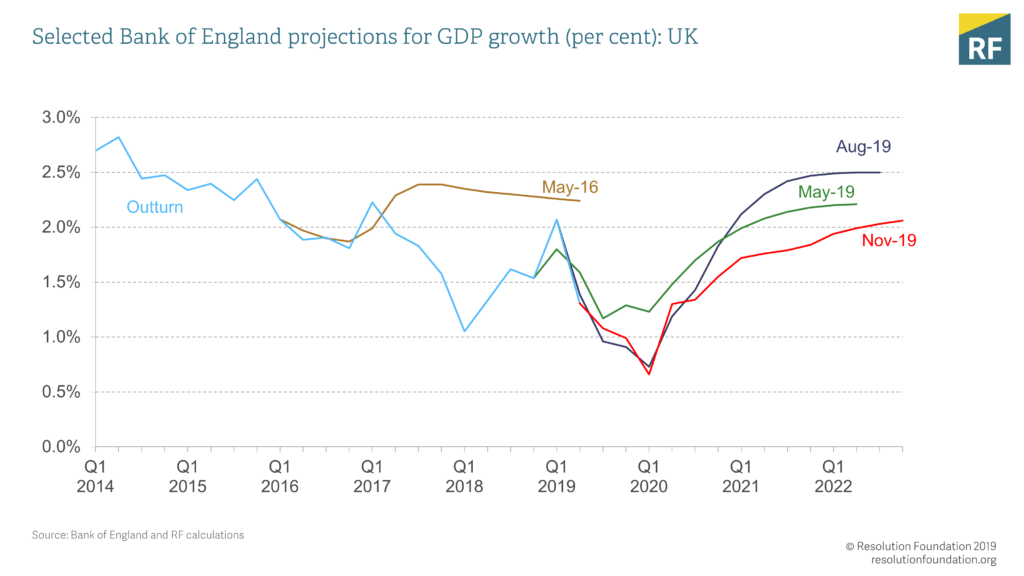 The pessimism partly reflects a downgrade based on the new deal (a deal helps in the short term but the harder Brexit it envisages hurts in the longer term). But it also reflects that our economy has already slowed (to half last year’s rate this year), and that the global economy is looking fragile. You can get a flavour of the Bank’s view from the fact that they use the word ‘uncertainty’ 147 times in the report…

Not so brave new world. The role of a slowing world economy is the real background to this election that is being totally ignored. Around the time of the 2017 election, we were having a tough time economically but the world economy was looking a lot perkier. That’s what you want if you’re facing a country specific shock, so you can deal with your own challenges with a welcome trade tailwind from a booming global economy. But that is not going to be the context for the next government. Global trade is having a very tough time – by which we mean it’s shrinking. 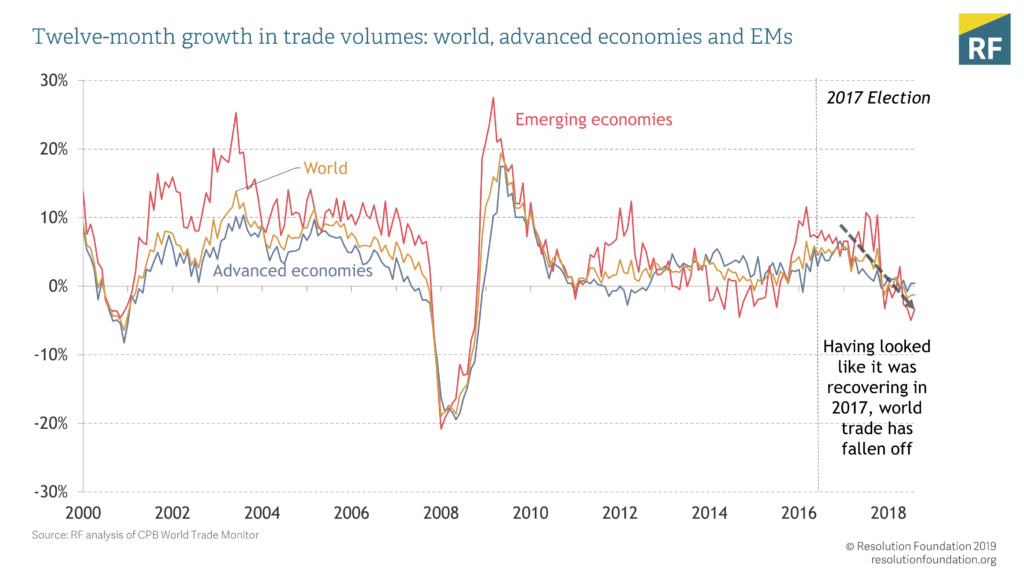 Most obviously this reflects Trump’s trade war with China and the associated hit to global business confidence, lower investment, and tightening credit conditions amid nervous financial markets. While some take comfort from the fact that we’re actually growing faster than Germany these days they should not – it just reflects the fact that the whole world, not just the UK, faces a rocky road ahead.

Growing earnings and high employment are good news for households as they head to the polls, while lower borrowing than we’ve seen for the past decade gives more options to the next government they elect. But far too much of this election campaign sounds like it’s sunny uplands ahead if we just “get Brexit done” or open the spending floodgates. The reality is the next government will face very real economic challenges. Domestically, they must deal with Brexit amid a loss of business, and potentially consumer, confidence – and that must be done against the backdrop of a fragile global economy. As ever, economic policy making will have huge implications for households’ living standards. And being elected to take those decisions is a huge responsibility, not a game.