Turns out David Cameron had a cunning plan. Calling and losing a Brexit referendum may have cost him his job, but it’s proved electoral mana for the party he left behind. It’s hard to imagine a wedge issue that would quite so neatly turbo-charge England’s decades long political realignment. And do so in a way that the Tories can embrace while Labour have to pretend isn’t happening (for an unusual combination of ideology and first-past-the-post arithmetic reasons).

So amid all the hot takes on today’s election results (yes, clearly we do all like to be vaccinated) let’s not lose the big lesson: maybe David Cameron is brighter than his recent reputational self-destruction has led many to conclude.

While today’s discourse is on political realignment, there’s also a fundamental economic realignment coming our way in the 2020s. Understanding what that means for our jobs, communities and planet – and how to successfully navigate this decisive decade – is the subject of our new Economy 2030 Inquiry, which we’re launching on 18 May. Please join us. And enjoy this week’s reads in the meantime.

Tribunal tribulations. We love access to data at the Foundation – due to the whole making research possible thing. Among the data we use is the online publication of employment tribunal judgements (the government’s been publishing these since 2017). This is important for shining a light on an issue (labour market enforcement) that gets far too little attention. But more transparency on this data isn’t always a good thing, is the argument in a new paper. The authors show that the lack of anonymity for claimants could be abused. For example, moves towards automated online reputation screening in hiring decisions could easily be extended by dodgy employers to blacklist potential employees who have taken previous employers to tribunal. Food for thought for those of us generally in favour of open data.

LGBTQ Economics. I was discussing the fact that we don’t see much economics literature on LGBTQ issues with a friend recently – and the very next day a paper, succinctly titled ‘LGBTQ Economics’, appeared. It covers a lot of ground on the literature but also the real world. Have a read, but two interesting highlights. In the progress stakes there was a doubling of economics articles related to LGBTQ issues over the past decade vs the 2000s. The paper also addresses the longstanding evidence that gay/bisexual men are paid less than their heterosexual counterparts, but lesbian/bisexual women earn more than theirs. It adds new data showing the former pay penalty has remained, while the pay advantage for lesbian/bisexual women has fallen.

Technical teens. We’re almost all worried about the kids being on their phones. Beyond the lack of conversation, we angst about the impact on teenagers’ mental health. But the literature on this is painfully inconclusive. A short new paper rather proves that point. It’s title “There Is No Evidence That Associations Between Adolescents’ Digital Technology Engagement and Mental Health Problems Have Increased” sounds like good news. The authors find little evidence that the strength of the relationship between tech use and mental health problems is rising – it’s gone up for emotional problems but down for depression. But under that headline the paper finds, in common with other studies, that tech use is associated with mental health problems. We just don’t have an answer on the key issue: whether tech use causes the health problems or visa versa. As the paper says, moral panics over the newest technology harming kids behaviour is old news (see old panics about radio dramas, comics and Dungeons & Dragons) but we badly need new answers on what is causing the rise in reported mental ill-health among young people.

Voting economically. I know we’re meant to think voters don’t care about the economy amid the fashion for culture wars, but 1) they do and 2) economics shapes lots of our cultural/social divides. How exactly do economic outcomes shape votes? Most political scientists have generally concluded that voters are myopic, voting on the basis of what happens immediately around election time. That isn’t controversial – things generally get less important to us as time goes on. But how quickly does that happen is the interesting focus of a new paper. It concludes that the ‘economic vote’ has a half life of one and a half years e.g. the state of the economy one and a half years ago is half as important in determining our vote as its current position come polling day. So, yes voters are myopic, but maybe not quite so short sighted as many assume.

Devolution data. Everyone’s Hartlepool-focused – but there’s a lot of Scottish and Welsh action to come. In that context I 100 per cent endorse a moan from our friends at the Institute for Government about the need for more focus on comparisons on public services across the UK’s nations – and for better data to make that possible. The report reminds us of important differences in approach (NHS more heavily prioritised in England vs Scotland/Wales, while Scotland and Wales take a more universalist approach to public services) and some well-known differences in outcomes (worse educational progress in Scotland than England). But it also highlights that comparing approaches/outcomes is being hampered by moves away from comparable data being provided. Devolution should be about the freedom to make different choices, not choosing to make it harder to compare the results of those choices.

Covid-19 is primarily a public health crisis. But it’s also taking a big toll on our mental health. That was brought out very clearly by new ONS data this week on symptoms of depression increasing during lockdowns. One in Five of us experienced some form of depression in early 2021 – up slightly from the autumn and nearly double the pre-Covid levels (note this is in contrast to no evidence of a higher suicide rate during the pandemic). The biggest increases are for the young, those with a disability and parents – and those who would struggle to afford an unexpected expense. In fact the income gradient in experiencing depression is huge, as today’s chart shows. Nearly two in five of the people on the lowest incomes (under £10,000) experienced depressive symptoms – over three times the rate of people with a household income of £50,000 or more. We’ll be returning to this crucial issue with a new report and event next week focusing on young workers’ mental health. 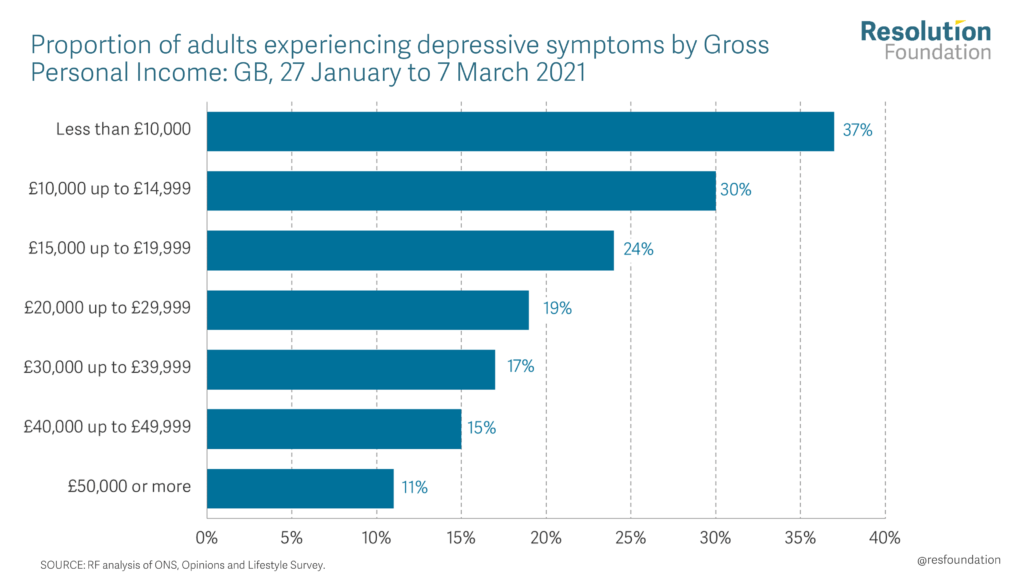