A tight labour market is finally delivering decent pay growth. In the three months to July 2019, average weekly regular pay (i.e. excluding bonuses) grew by 1.9 per cent on the previous year (slightly down on the previous month). Given that average real pay grew by 2.1 per cent in the eight years prior to the crisis, we can safely say now that we more or less back to ‘normal’ on pay growth. And with employment (and unemployment) little changed in recent months – at record highs and close to record lows respectively – it looks like the labour market has settled into a healthy holding pattern.

But we should not take this for granted – it has taken ten years to get the economy delivering on both jobs and pay. And there remains an underlying fragility. We only have to look back to 2015 to see that a recovery can turn sour quickly. Then it was the Brexit vote, with the ensuing fall in the value of the pound and the jump in inflation choking off real pay growth. Today, stronger real pay growth is underpinned by stable inflation at normal levels, so we can be more confident that recent growth rates will be sustained. But this assumes, of course, that we do not suffer an economic shock. Our newly healthy labour market would surely not survive the economic disruption that would accompany a no-deal Brexit. 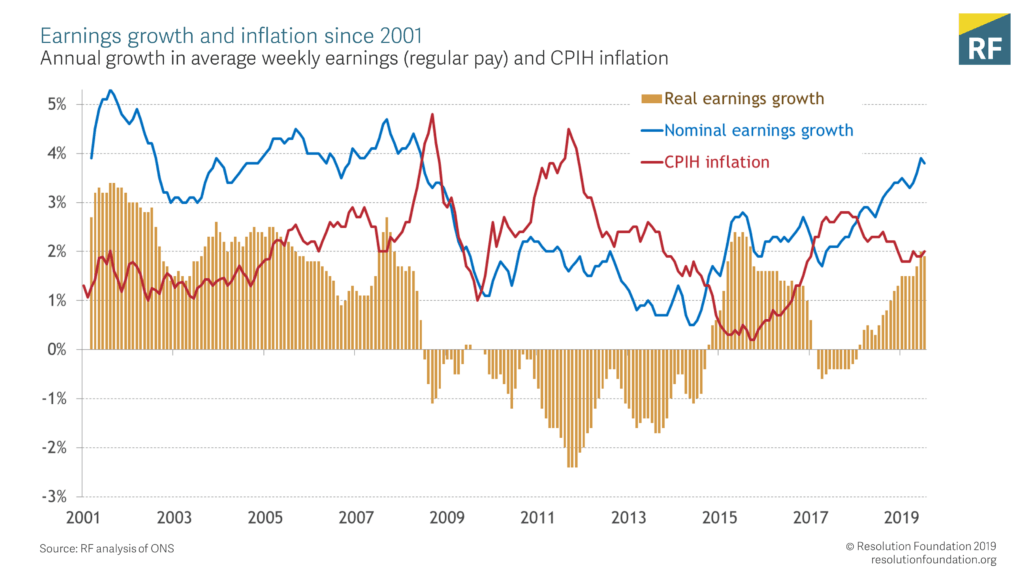 There are other notes of caution. We should note that, although the labour market is undoubtedly ‘tight’, it is no longer tightening – meaning the labour market is not likely to be able to push pay growth much higher. The employment rate has been flat for seven months now, as has the unemployment rate. Moreover, the number of vacancies in the economy has been falling throughout 2019 – there are now 49,000 (6 per cent) fewer than at the turn of the year. It is possible that Brexit-related uncertainty is contributing to this – in our recent Earnings Outlook we noted that the fall in vacancies was most pronounced in sectors such as Manufacturing and Construction which are exposed to the macroeconomic environment. 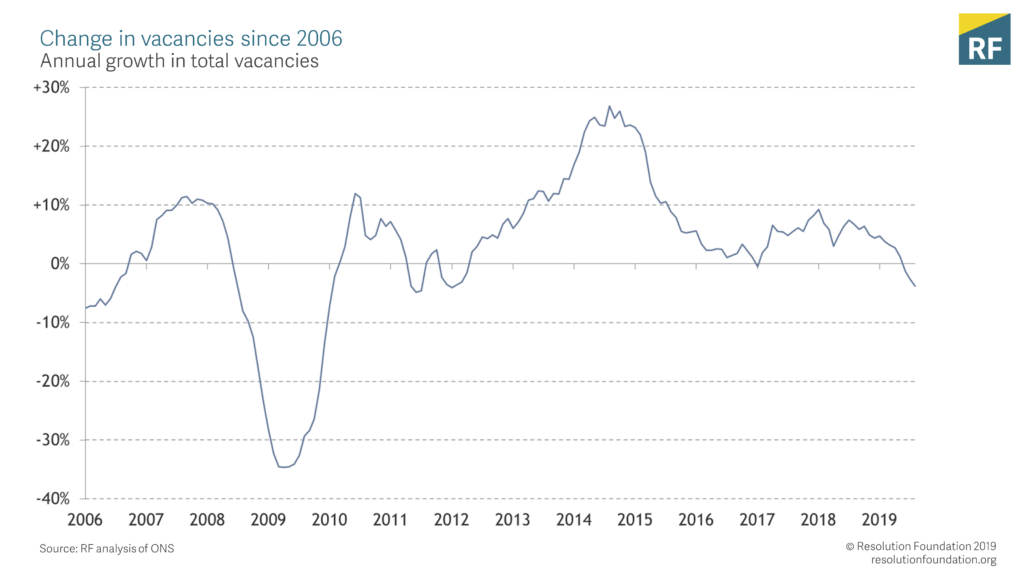 Further evidence of fragility is perhaps seen in the fact that we have recently seen self-employment return as a significant source of jobs growth – self-employment accounts for a third of jobs growth over the past year. In addition, the regional picture is less positive. Low employment regions are experiencing slower (and in some cases negative) jobs growth, compared to high employment areas over the past year. We can add to these negative signs the ever-absent productivity growth, which continues to place a constraint on pay growth. The Bank of England argues that Brexit-uncertainty is a key factor here, by undermining business investment. 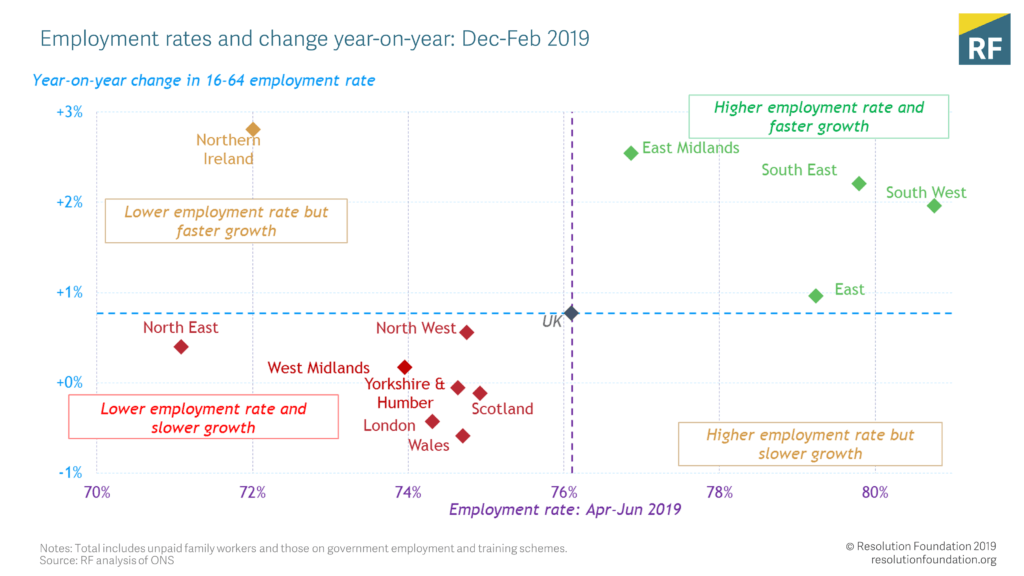 It is obviously good news that the UK is in the midst of a strong and sustained pay recovery. And let’s face it, after the decade we’ve had, it’s long overdue. Because in spite of this recovery, average weekly pay in 2019 is still £3.25 lower in today’s prices than it was back in 2008. At the current rate of pay growth we won’t surpass the previous peak until December this year. 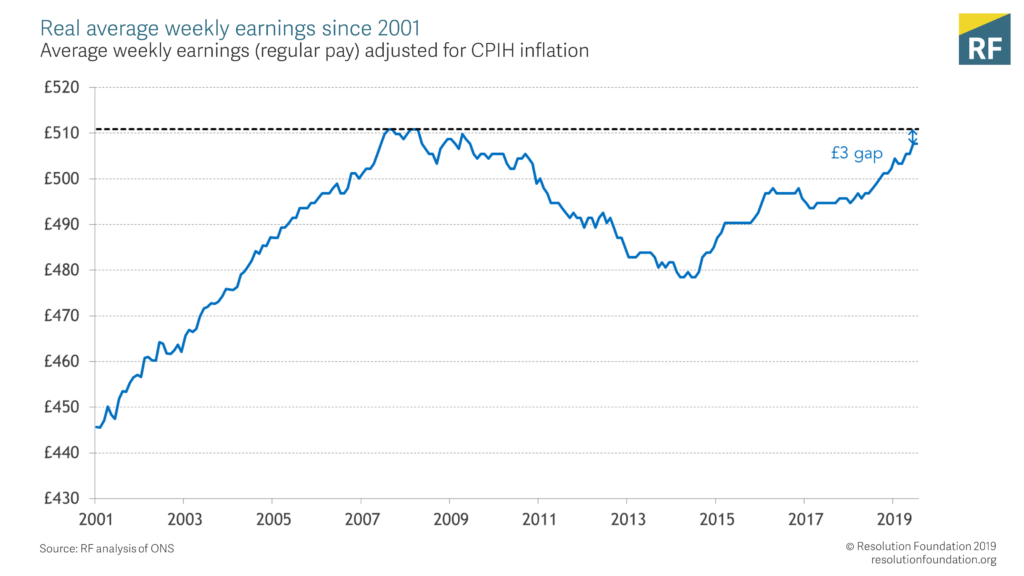 Returning to pre-crisis should thought of as a milestone, rather than a target – it’s a stark reminder of how much ground has been lost, and why the UK has experienced an unprecedented squeeze on living standards. All the more reason then, that policy makers should do everything they can to look after the fragile recovery, and keep our pay recovery on track.