Heathrow isn’t going ahead. Coronavirus is. It turns out that bugs are better than Brits at travelling the world. Even if we had a runway the whole proto-pandemic thing means flying is so 2019. But no over-reacting please – we’ve only just lived down the embarrassment of the run on Northern Rock, we don’t need one on Lidl too. I repeat, there is no need to panic. I am definitely not stocking up on baked beans and bog rolls.

If things take a turn for the worse over the weekend and the country goes into lockdown, you can see TOTCs as part of the crisis response. We’ll help you survive quarantine boredom and get really well informed about school admissions, the price of Lego and how we calculate inequality.

Have a good virus-free weekend,

Myth busting. Good news this week for data accuracy. Less good on inequality. The Office for National Statistics to their credit (and after some nudging from our own Adam Corlett) has been beavering away to overcome the problem that when we conduct income surveys, the very rich tend to be less than forthcoming about how much cash they’ve got coming in. They’re correcting their stats using data from tax records, where under-reporting doesn’t happen on the same scale due to the whole ‘it’s a crime’ thing. Does this matter? Yes. The share of total income going to the top 1 per cent rises by a third (from 6 to 8 per cent) under the new approach. Inequality is higher too and, unlike under the old ONS approach, has not fallen over the past two decades (one-chart summary). This also matters because naughty politicians (hello Philip Hammond) have used the ONS data to say things like “income inequality is at its lowest level in 30 years”. Which it isn’t. So remember: income inequality isn’t falling. Or rising. It’s just far too high.

Lego inflation. Now this is definitely not new, but the economics of Lego is so core TOTCs territory that we’re slightly horrified not to have seen this 2013 blog before! Thanks to Tom Chivers for rediscovering it. It’s a data-driven investigation into the perception that Lego prices have seriously built up (sorry) over time. In fact, regular Lego prices haven’t increased – since 2006 the price of an average brick has been flat at 10 to 13 cents. Instead we’re seeing the creation of a more-pricey top of the market for adults (it isn’t kids paying £250 to build Old Trafford…). Oh, and apparently we didn’t appreciate how much LEGO cost as children, so now we’re shocked when it’s our turn to pony up for our own kids.

Debunking growth. The ‘degrowth’ concept is enjoying a renaissance amid climate-related traumas. Let’s voluntarily slow our economy to radically cut consumption for a greener planet is the idea. Diane Coyle takes a critical look at the arguments for degrowth, building on last week’s Bloomberg article from Noah Smith. Two points she draws out particularly well. First, if your goal is shrinking GDP that means actively reducing another area of consumption whenever someone happens to come up with a popular innovation (or banning innovation). And second it ignores intangible output growth – where new uses of existing materials create extra value despite no new material costs. Of course, GDP growth shouldn’t be the only measure of a healthy economy. But GDP not doing much growing also has its problems, as you’d hope the living standards disaster of the last decade had taught us…

Viral economics. If you want to take your mind off the health impacts of the Coronavirus, how about angsting about the economics? Have a read of Ryan Avent’s take, reminding us that this is a shock to our potential to produce output (a supply shock) rather than to our wish to spend (the kind of demand shock policy makers are more comfortable confronting because they can do more about it). It’s also worth checking out these twitter reflections on this 2009 paper by Simon Wren-Lewis and others on the economic impact of a pandemic. It noted that the biggest economic impact comes not from the health problems themselves but from the policy response (closing schools can brings a lot of economic activity to a halt). And if you like the coming together of macroeconomists and public health officials to take on big public policy questions then you’ll be pleased to see the journal Nature calling for more such collaboration in its editorial this week as they appoint their first economics editor.

Accessing schools. From closing schools to getting into them. This Sutton Trust paper from the ever-excellent Anna Vignoles and colleagues reminds us what a turkey our current admissions system is. Generally allocating places based on who lives closest to a school means access to the best schools is based on who can pay a premium to live on the right road, driving an average 6.9 percentage point gap in the academic quality of schools attended between poor and non-poor pupils. Their answer is so-called “marginal ballots”, where the majority of places are allocated under the current system, but the remainder are reserved for a random draw among all un-accepted applicants – giving them an equal chance of getting in whatever their parents’ house-buying potential is. Controversial? Oh yes. And a reminder to political parties that it’s easier to sign up to the theory of social mobility than doing what’s required to make it even slightly more of a reality.

Immigration chat last week was all about the change to come from the new post-Brexit migration regime. But it turns out migrants haven’t been waiting around to hear Priti Patel’s plans, as Chart of the Week and new ONS migration statistics show. Overall net migration volumes have been fairly stable since 2016. But if what we care about is the interaction between migration and our labour market then some big shifts are already well underway. Work-related migration from the EU fell from an eve of recession peak of 190,000 to just 79,000 in the year to September 2019. That’s big and means that – for the first time since comparable records began in 2009 – the majority of work-related migration is coming from the rest of the world. But most migration from the rest of the world isn’t for work, it’s to come and study here. So yes, the UK’s new immigration system will be a huge change for some firms when it turns up in 2021. But big economic change on migration is running ahead of the policy change (again). 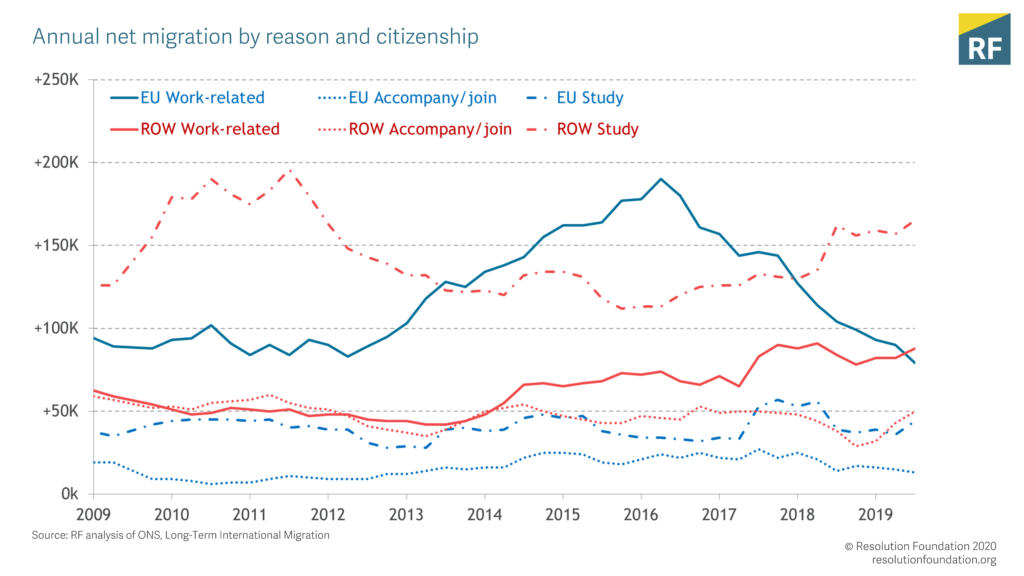