I generally thank my lucky stars that I get paid to keep up with economic and political developments. It’s a massive privilege. But it’s also impossible right now. Another week of ups and downs in the gilt market is translating into the real world: interest rates on some fixed rate mortgages are hitting highs not seen for over a decade (see COTW).

Meanwhile the Birmingham-based U-turns, about turns and coup claims have been tough to follow – and that’s before you learn that, while Macron is our best friend again, anyone who doesn’t love huge unfunded tax cuts is the new enemy number 1. Personally I think the sweet spot is to be a proud member of the anti-spaffing money you haven’t got up the wall coalition, while also being a going for growth groupie (here’s our take on what growth, growth, growth requires).

This week’s reads touch on some of this – including where tax cutting Tories might want to focus. Have a good weekend, whichever coalition you’re in.

Tough tax. Scrapping the 45p top tax rate was all about ensuring the rich had an incentive to pull their finger out effort wise. Now it’s no longer happening our prayers are obviously with the top 5 per cent who lost 60 per cent of their tax cuts with the U-turn – now they’re only getting 40 times the tax cut of the bottom fifth. But who does face the highest marginal tax rates, which Tory tax reformers might want to focus on? Not the very highest earners, as a quick blog from Dan Neidle shows. While they face marginal tax rates of 47 per cent, some on lower (although certainly not low) incomes lose far more of each extra pound earned. Removing child benefit from people earning between £50-60,000, and the personal allowance from those on £100-125,000 means marginal tax rates exceeding 60 per cent. And that’s before we get to student loans, or indeed very high effective tax rates for those on benefits. Care about incentives? Then worry less about the very top.

Not normal. Last week we largely hid from reads on the unfolding market chaos – including the emergency intervention by the Bank of England. But it’s worth you taking the time to read the Bank’s first detailed discussion of what happened – provided in a letter from Deputy Governor Jon Cunliffe to the Chair of the Treasury Select Committee. Alongside the mechanics of why some pension funds got into difficulties, it also lays out in black and white why what has happened in the UK over the past two weeks is a very long way from normal. If you do nothing else look at the first chart which shows that the rise in longer term interest rates in the UK over the past month is far higher that that seen in the US or Euro area. The sheer volatility is also worth noting: last Wednesday the range of yields on 30 year gilts seen in one day was as wide as seen in 23 out of the past 27 YEARS. The task now? To make British economic policy look a lot more normal.

Coal costs. Coal is back in fashion, as Europe tries to cope with far less of the hydrocarbon we’ve largely replaced it with: gas. But longer-term, Europe – and everyone else – needs to phase out coal – and its workforce – to meet our net zero targets. While our own work shows concerns about net zero driving widespread job losses are vastly overdone in the UK context, our history provides warnings about the challenges facing some other countries. Recent research uses the UK coal mining’s dramatic collapse in the 1980s to warn policy makers to focus of the dangers of displacement for more than five million coal miners, well over half of them in China. In the UK miners saw their wages fall by 40 per cent immediately after losing their job, and their earnings were still significantly depressed fifteen years later. Anyone wanting a smooth transition to net zero should hope China does a better job of closing its coal industry than we managed.

Watching wages. The IMF have to update their forecasts for the global economy with the new World Economic Outlook shortly – but you don’t need to wait for it to be published to know it’ll be downgrades all round. More interesting is a chapter they’ve published in advance (summary) on what history has to tell us about wage-price spiral risks. It examines 20 situations in advanced economies over the past 50 years that had similar features to today: rising inflation, rising nominal wage growth, falling real wages, and tight labour markets. The good news? Most didn’t lead to wage-price spirals. The bad news? There was a lot of variation – including real spirals. But generally the authors are optimistic we should avoid that fate. Why? Because central banks are whacking up rates around the world to make sure that’s the case. Which brings us to…

Cost-of-living pain in 2022 has been about fast rising prices, especially energy and food. The 2023 edition is going to bring something else centre stage: housing costs. Rents are rising fast and surging interest rates will feed into higher monthly mortgage payments. The government may take some heart from the fact that rising mortgage bills won’t be as broadly felt as they were in the past: three decades of falling youth home ownership mean only 28 per cent of households have a mortgage (vs 43 per cent in the 90s). And they might get even perkier when told that among Conservative voters just one-in-three have a mortgage. That’s what having older and richer voters does for you: 50 per cent of those who voted Conservative in 2019 owned their home without a mortgage, almost twice the national average.

But the government shouldn’t totally chillax just because other parties’ voters are harder hit across the UK as a whole. Why? Because the new political battleground of the ‘Red Wall’ is partly defined by lower house prices and more mortgaged home owners – around two-in-five households are in the process of buying their own home. The politics and economics of rising interest rates is going to be huge in the years ahead. 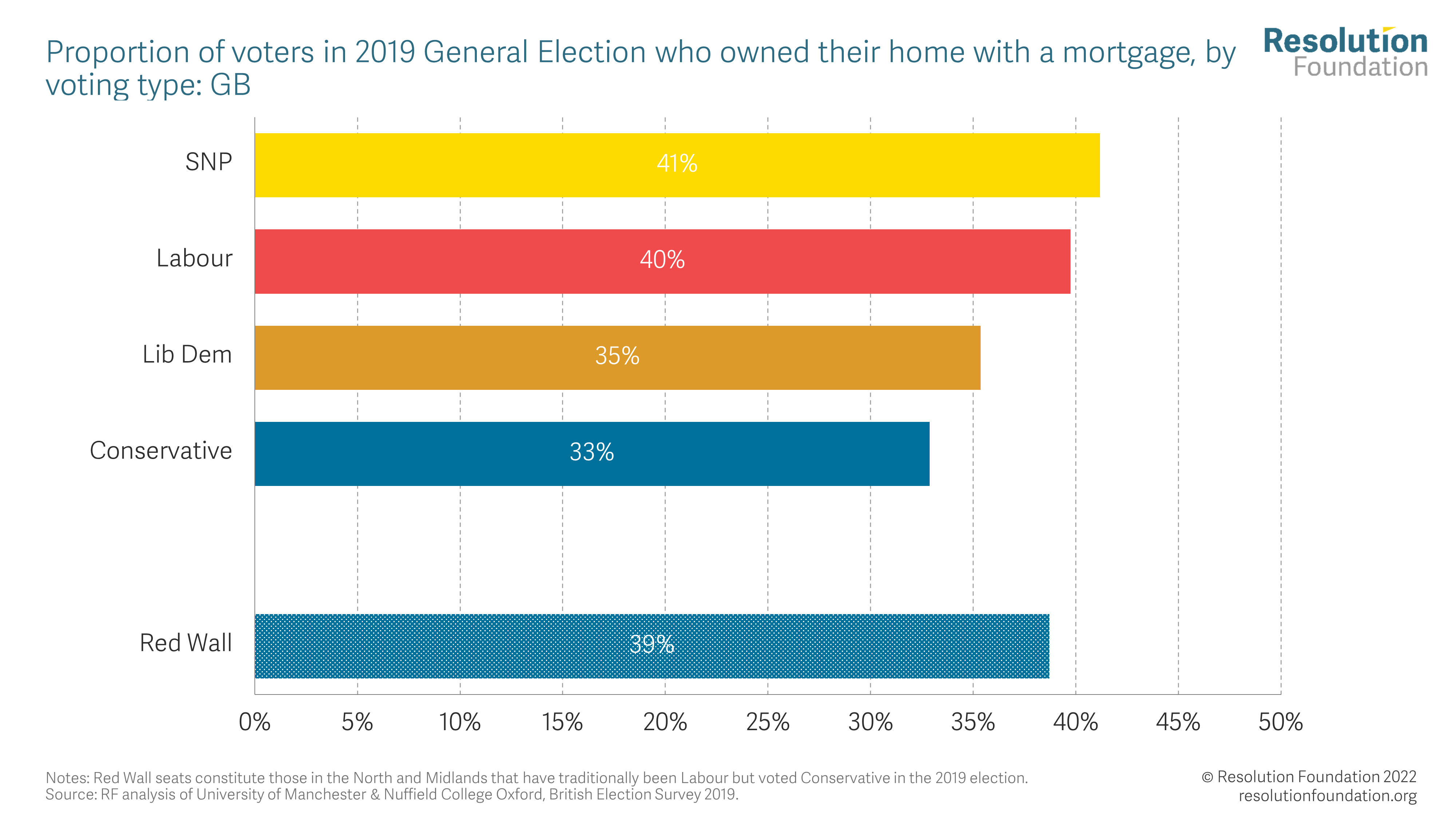