The election is off. In the horse-racing sense. And Corbs has definitely had the better first week. Donald Trump AND Mike Ashley slagging you off is what winning looks like in the “having the right enemies” school of politics. More worrying for Conservative MPs should be the fact that the campaign has knocked Brexit off the news. After fighting hard to get the election, so far the Tories are doing surprisingly little to fight it. But it’s early days – there is a long, long way to go to polling day.

In totally unrelated news, I’m planning to knock myself out for some of next week for a middle-aged-man knee operation – good news for missing some of the campaign but possibly putting next week’s TOTCs at risk. Apologies in advance if that becomes the case.

Political interweb. Twitter banned political ads this week – which will have no impact on their profits or our politics given there basically aren’t any on their platform. But the internet does have big effects on our politics. New research (free summary) takes a global perspective, examining the rollout of 3G. The good news for liberal democratic types is that the internet reduces citizen’s confidence in their current governments, especially in places where news broadcasting is censored but the internet is not. The less good news is that censorship looks quite effective at avoiding that drop… And liberals are probably less happy that the internet also increases support for both left-wing and right-wing populists. Maybe both parties should take a look before committing to full rollout of 5G…

Tough on the causes of crime. Boris Johnson has dialled up the “lock ’em up” part of the Conservative rhetoric since he become PM. But what about the other half of Tony Blair’s famous phrase – the causes of crime? New work (summary ) adds a new angle to discussions. It links short-term air pollution exposure to increased aggressive behaviour and violent crimes (it has not impacted on other kinds of crime). Worth a read for any politicians that didn’t already think there was reason enough to reduce emissions…

Uncertain policy makers. There is certainly going to be a general election, but I’m very uncertain about what’s going to happen. Policy makers are also regularly very uncertain about what is going on, but need to make decisions nonetheless. A short, sharp piece on the Bank of England’s Bank Underground blog tries to give us an insight into how uncertain policy makers are at different points. The author has created an index based on the number of times the word ‘uncertainty’ or something similar crops up as proportion of all words in the minutes of MPC meetings. Unsurprisingly uncertainty has been high during Brexit votes and delays, but it might be more surprising that it wasn’t as high during the huge financial crisis. It turns out things can be certainly awful….

Partnering pressure. I don’t want to come across as unromantic – but financial incentives do effect our choices of partners. New evidence to prove the point comes from an Australian welfare reform back in 2006. The reforms, designed to encourage single mothers into work, meant that newly separated parents with an 8-15 year old child were ineligible for single-parent welfare payments. This, it turns out, has a rather large unintentional side effect… An article in the Economic Journal (summary and earlier free version) shows that it led to low-income mothers re-partnering more quickly after a relationship breakdown. In fact, the chance a mother would re-partner within six months increased by 64 per cent. Whether or not you think that’s a good thing, it’s definitely a big effect. Think your policy through, people.

Sticky wages. In the rather odd meat market that is the scramble for US academic job among those finishing economics PhDs, a big deal is made of candidates’ “job-market paper” – your best piece of work that acts as a calling card for why you should be hired. The job-hunting season is now underway and there are various twitter threads listing interesting papers. One that has been rightly highlighted as standing out is close to RF’s labour market interests. The paper provides new evidence on the crucial subject of so-called “downward nominal wage rigidity” – the idea that wages rise during good times but don’t fall in bad times. This is central to why we get big unemployment rises in recessions – wages don’t fall to price more people into work. For those in existing jobs we know their wages are downwardly rigid (firms don’t want to ask employees to take a pay cut), but what matters most should be what happens to new workers being hired. Intuitively it feels more likely that firms could cut their wages, and evidence shows that on average wages do fall for new hires. But the great addition of this work is looking at actual job ads, not averages, to show that individual firms don’t cut wages for specific jobs even for new hires. Why do we care? It reminds us that while the last recession saw a smaller than expected unemployment rise, we shouldn’t assume that will always be the case. The underlying economic dynamics that can give us unemployment disasters are alive and well.

It’s election time, so we’re going to hear an awful lot about how awful the other parties are, and how disastrous their policies would be. But that’s no way to start your weekend so this week’s Chart of the Week focuses on a big issue that both main parties are broadly in agreement over – massive capital spending increases to fund the likes of science, transport, housing and the rest. Chancellor Javid has called for a £100bn National Infrastructure Fund, while Shadow Chancellor McDonnell wants to up the ante with a £250bn National Transformation Fund. With the cost of borrowing so low it’s not a massive surprise this is the case. There’s certainly areas where it’s badly needed too (hello climate change adaption and social housing). But it’s worth reflecting on how big a change this all is for the state – government investment spending is already much higher than the under-investing 1990s and (perceived as) high-spending 2000s. We’ll be exploring these ebbs and flows of the size and shape of the state with new research and an event (livestreamed here – subscribe to our channel to see reminders) on Monday – alongside looking at what the main parties’ plans might mean for the future. Deep dives into tax and social security will follow in the coming weeks. But for now you can just look forward to the infrastructure splurge, whoever wins on 12 December. 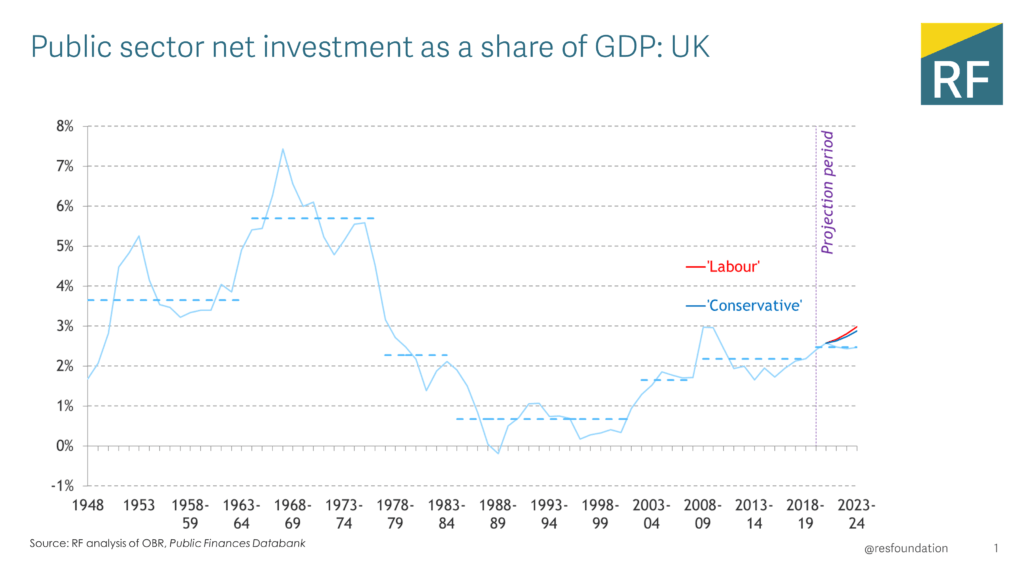