Well survived Christmas. Just New Year to go. You can do it. To help prep for next week and the need for more creative New Year’s resolutions than eat nothing/drink nothing/run miles we’ve got a special edition of Top of the Charts below. It looks back at 2018, digging under the headlines to see what lessons our labour market over the past year should have for policy makers over the next twelve months. Hope it provides some food for thought. Or thoughts for resolutions.

2018’s lesson for its successor – look beneath the headlines

History isn’t going to be kind to 2018. But on the labour market front it’s got some headlines to boast about. Record employment and the lowest unemployment in over forty years. Full time work on the up and (nominal) pay packets rising at the fastest rate in a decade. These are important headlines – after all, for most people the labour market IS the economy.

But, as we look ahead to 2019, do those welcome headline mean there are no lessons for politicians and other policy makers thinking about the year to come? Far from it. Here’s five that emerge from delving beneath the headlines of our labour market.

The UK’s jobs surge of recent years should not be underestimated, just because it’s old news. With unemployment hovering just above 4 per cent all year it’s easy to forget that as recently as 2016 the Office for Budget Responsibility thought 5.5 per cent was as low as we could sustainably go. We live and learn.

We should learn from who the beneficiaries of such high employment levels are – as the chart below sets out[1]. Those groups that generally find it hard in the labour market are the ones seeing rising employment. People with disabilities account for three-quarters of the gains and ethnic minorities for over a quarter (despite both accounting for just 13 per cent of the population). This should warn anyone against taking high employment for granted. 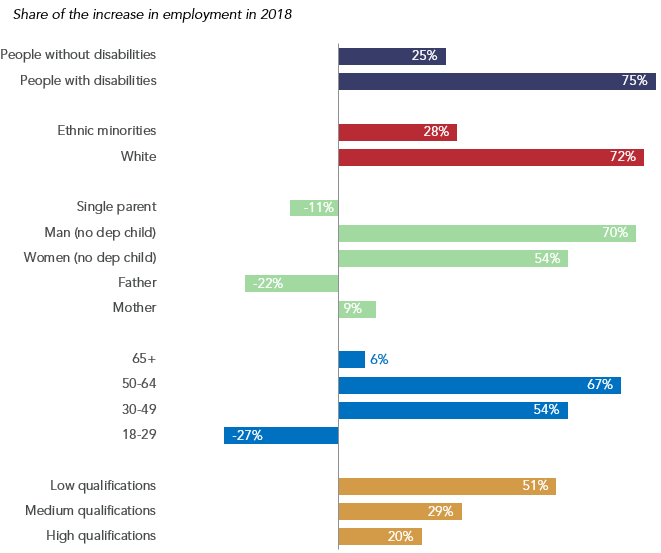 Another reason not to take big employment gains for granted is because they are probably over. Unless an expected jobs spurt took place in the last three months of the year, 2018 will be the slowest year for jobs growth since the employment recovery began (see chart below[2]). Of course we have been surprised before, and I hope we are again. However, the employment rate has been broadly flat since February 2018. That sounds like a plateau to me. 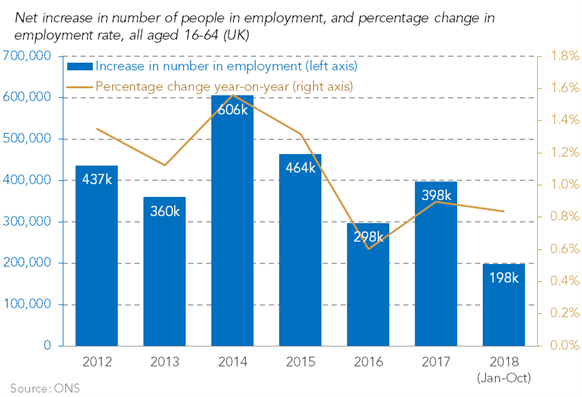 What does this mean for living standards prospects? It puts a lot of pressure on wage rises if the labour market (as supposed to the state) is to deliver rising incomes.  But if wages grow as slowly as the OBR currently expects, we will have to wait until 2023 for another year as good as 2018 in terms of labour income growth[3].

Averages matter, but they also obscure. Very positive employment rates can hide enduring or emerging challenges that should not be ignored in 2019. In October the proportion of people aged 16 to 64 who were economically inactive fell to 21 per cent, a record low. However, there is worrying evidence of rising inactivity for one particular group: young men.

The number of young men (16-24) who are not in education, employment or training (NEET) and are not looking for a job has been rising fast, up from 150,000 in 2013 to 200,000 today. What is causing this surge? A sharp rise in the number of young men with a mental illness or suffering from depression that prevents them from working, as the chart below breaking down the 47,000 increase shows.

These increases fit with wider evidence of a rise in mental health issues amongst younger people. The very real labour market effects mean they cannot simply be put down to better reporting or diagnoses. If this issue isn’t on policymakers to do list for 2019 I don’t know what is. 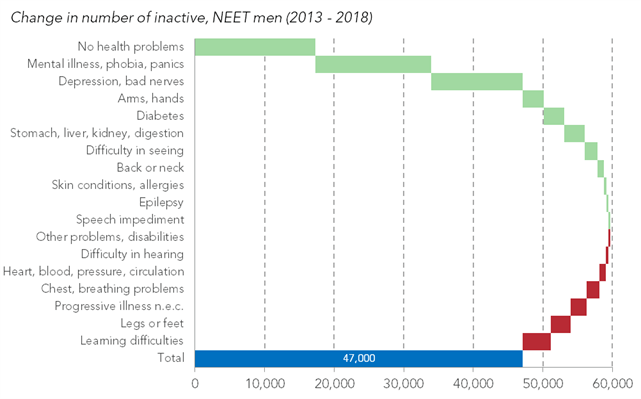 Christmas is done, but we should get a few more presents on the wages front in early 2019. Our latest pay projection suggests real wages data should strengthen further in the first few months of 2019 – breaking through the 1 per cent barrier for the first time since the post-referendum wage slowdown (it’s currently 0.99 per cent).

But let’s not get carried away. Sustained pay growth relies on productivity growth – and there is little good news on that front. Post-crisis productivity basically flat-lined – contributing to the depth of Britain’s pay squeeze. It then returned to life, of a kind, post-2014 – reaching a new (lower) growth norm of 0.9 per cent. The ideal next stage would be productivity growth strengthening, underpinning pay increases as a tight labour market favours workers looking for pay rises. This would feedback into more productivity growth as firms were encouraged to invest in labour saving technology. A virtuous pay-productivity cycle.

However, recent data has instead pointed to a renewed productivity slowdown as economic growth has stalled and firms have pulled back from investing. And it’s not just firms that are nervous – households are reporting the lowest net optimism about our economy’s future since 2008 (a 2011 one month bounce aside). 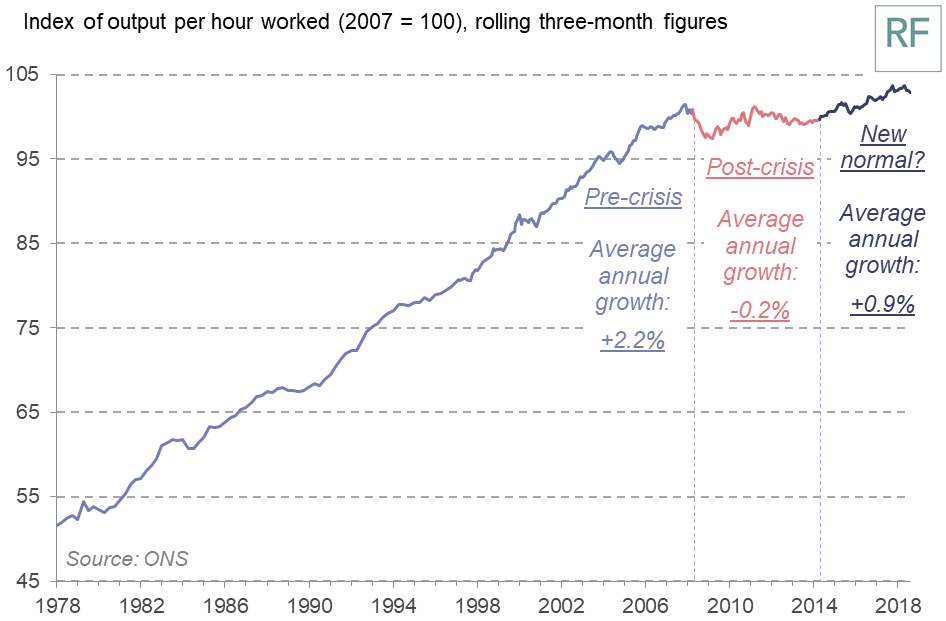 While recent pay growth has been weak, it has at least been progressive. That’s largely because the introduction of the National Living Wage (NLW) in April 2016 has delivered the biggest pay rises for the lowest earners (see the blue and gold lines below). As the NLW has continued to ramp up, hourly pay growth has remained higher for lower, rather than typical, earners. But something else is going on with weekly pay, which is what matters for living standards.

In 2017 weekly pay growth was distinctly less progressive than previous years. Worse, in 2018 it turned regressive with the fastest pay growth being for the top 10 per cent of earners. The weakness of weekly pay growth for the bottom quarter of the population is clearly concerning – and also puzzling given rises in the NLW. But remember, the lowest weekly earners aren’t necessarily on the minimum wage – hours matter too. The divergence between hourly and weekly pay growth at the bottom suggests that falling hours worked is part of the story. This should also remind us that reducing pay inequality needs to be about more than a higher minimum wage. 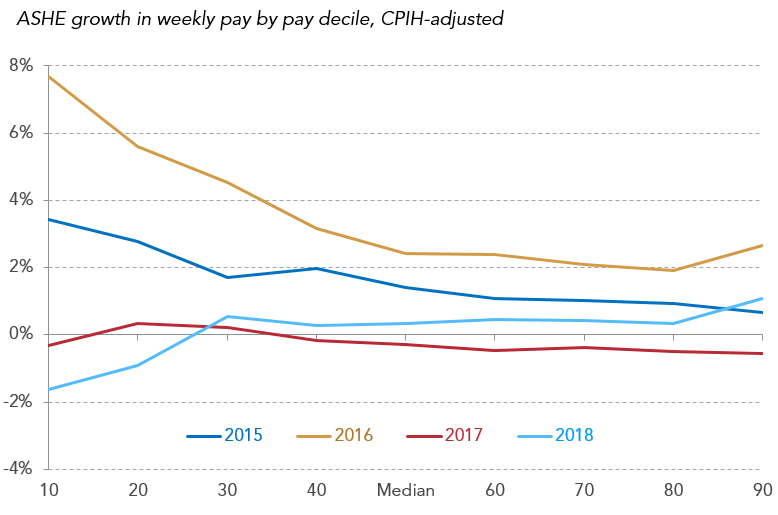 2018 has given us all encouraging labour market news on both employment and pay. But for those paying more attention it also has important lessons for 2019. While Brexit will inevitably dominate the headlines, policy makers should also make learning those labour market lessons one of their New Year’s resolutions.

[1] Comparing the average over the first three quarters of this year versus 2017.

[2] We focus here on jobs growth across each year rather than averaging employment levels for a year and comparing it to the average of the previous year.