Sign up for our weekly Top of the Charts email here

I’m afraid a rather serious mood is dominating at RF towers today. It’s Theresa May’s last weekend as Prime Minister. It’s (probably) Boris Johnson’s last weekend for a while without that responsibility sitting on his shoulders. She should, and I’m sure will be, sad – the last three years have represented political failure on almost level. He should, and I’m sure won’t be, scared – being Prime Minister bears almost no relationship to any other jobs in our politics. No-one is ever truly prepared.

With the kinetic phase of the long post-2016 political cycle very possibly about to kick off, the rest of us can spend the weekend hoping that we somehow manage to navigate the very real challenges facing the country without us becoming any more divided or our politics any more degraded. Sound difficult? Maybe. But then again, so was getting to the moon.

False memory. Most people have rubbish memories. That’s among the good reasons to be thankful capital punishment no longer exists. On a slightly less morbid note the problem of false recall extends to things like voting, which is really important for pollsters making predictions in politically turbulent times like these. When YouGov asked people how they voted at the last general election you’d expect a fairly straightforward answer, right? Wrong. The blog gives the example of 7 percentage points fewer people now recalling having voted Labour in 2017 than did so immediately after the vote – and we’re talking the same people here. This matters because polling companies generally use how people voted in the past to get a good handle on how we’ll vote in future – so our false recall might explain pollsters currently coming to pretty different views about levels of party support. In sum: if we don’t know how we voted last time, who knows how we’ll vote in future.

Intelligent dictators. If you’re planning to be a dictator of a poor country then get an economics degree. That’s the message from new research (summary) looking at how foreign direct investment moves into non-democratic countries. More money is invested in dictatorial regimes when leaders have strong educational backgrounds, and in particular if they studied economics or worked in business. If you’re worried it’s too late to retrain ahead of taking up your dictatorship don’t worry; the leader’s age and political experience seem to have no bearing on investment levels.

Opportunity knocks. Raj Chetty is well known for his innovative economic analysis of inequality, mobility and place in the US (see this excellent Atlantic profile). But beyond research he has been trying to help apply his findings to cities around America, most recently by providing a new tool – the Opportunity Atlas(definitely take a look) – using data following 20 million Americans from childhood to their mid-30s. It shows which areas offer children the best chance of escaping poverty, and can help local areas understand their specific challenges. This kind of crucial work currently can’t be replicated for the UK given a mix of problems with data collection and integration. Local leaders, including all our new metro mayors, should be demanding that is put right.

Gentrification knocks. Yuppies turning up with their beard oil and quinoa is understandably upsetting. But ever-popular opposition to gentrification goes far beyond that, with assertions that it is very damaging to existing residents – which is why new research (blog) questioning many of the claims by anti-gentrification campaigners is worth reflecting on. It finds that many existing residents stay and benefit from reduced chances of being in poverty, rising house values and better educational outcomes for children. The big change in population in gentrifying areas is driven by who arrives, but a small increase in outward migration does take place (although those leaving don’t appear to be made worse off). Building more housing would help ease that outward migration. Crucially of course the impacts of the nature and pace of cultural change in neighbourhoods go far beyond the economics – but on the economics the research should encourage us to think more deeply about who the winners and losers from change are.

Fiscal riskiness. Today’s public finance figures show that borrowing is up so far this year compared to last year – possibly bringing to a close the post-2010 era of falling deficits even before we start talking about the cost of No Deal or the new PM’s plans to spend more/tax less. But what are the other risks to the public finances? That’s the question the UK’s budget watchdog (the OBR) answered in this week’s Fiscal Risks Report. All the news coverage focused on the finding that No Deal would increase borrowing by £30bn – but the more interesting (if not quite so imminent) parts of the report cover under-discussed but crucial issues like the fiscal impact of climate change and how the costs of public debt levels change over time. If you can’t stomach the 293 pages, here’s our take.

Chart of the Week
Picking Chart of the Week has been a tough call this week, mainly because there are 57 absolute gems in our annual Living Standards Audit. We’ve eventually decided to focus on the big picture of what has happened to typical household incomes year-by-year since the mid-1990s. Three things stand out: 1) the mid-90s to early-00s were happy times for living standards 2) things started to go pear-shaped (especially for low- and middle-income households) before Northern Rock went bust 3) the past two years have been a disaster with falling living standards – this is worse even than during the 90s recession. Turning that around must surely be a top priority for the next PM. 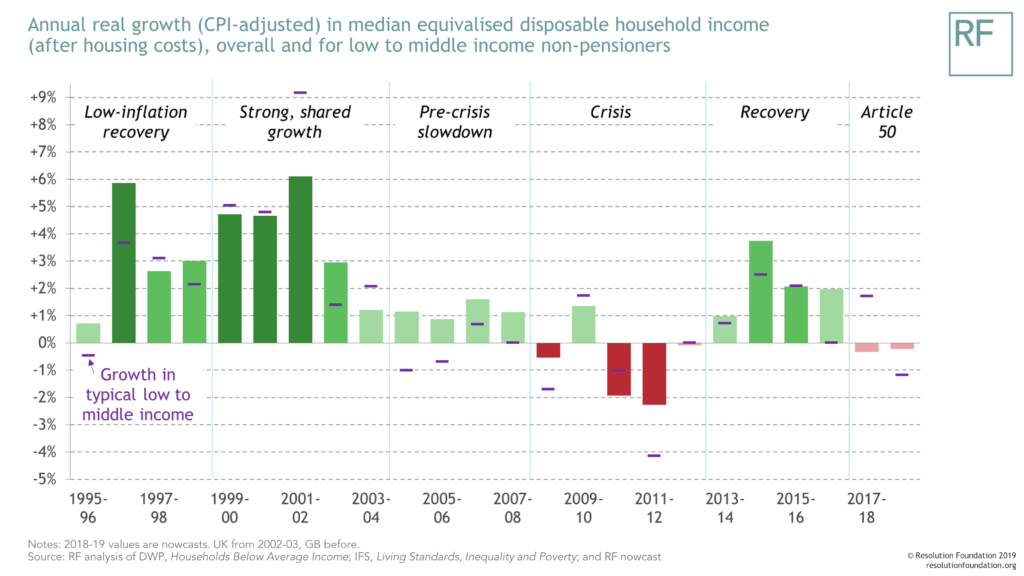