Hope all your houses are enjoying their (electoral) plague today. It probably shouldn’t be much of a surprise. The public’s opinion of our politics is at its lowest ebb on record, while just this week one MP managed to get himself sacked for (allegedly) telling the truth when the rules are he shouldn’t and another for telling a lie when the truth is kind of required (in court). In the silver lining stakes at least with those two cases we’ve got some good old fashioned crime = punishment in action. After all, one lesson that both my kids – and our politics – could do with is that actions have consequences.

Have a great child-rearing/politics-fixing weekend.

Competitive health: One of the arguments for our NHS vs much more market-driven health systems is that it helps keep costs down. In a planned system you don’t need to use as many resources to have the spare capacity (ie extra hospitals) for competition to exist. But the lesson from this is NOT that if you do have a more market-based system things end up cheaper with fewer hospitals – in fact it’s often more competition not less that you want to see. So finds a great paper which has recently won its authors (including ex-LSE academic John Van-Reenan) a major award. The paper details huge variation in prices for the same medical treatment across the US, and indeed within the same hospital. It goes on to show that in parts of the country with only one hospital, prices are 12 per cent higher than in places where there are four or more rivals competing. The policy lesson? If you want a competitive model for health care provision you’d better make sure it’s actually competitive.

Mind the Gap: while it might seem nerdy, estimates of the “output gap” matter A LOT. The output gap measures how hot or cold the economy is running by comparing its actual size (GDP) with its potential (GDP when all the country’s resources are fully employed). If GDP is below potential, the Bank of England should be setting lower interest rates and the Chancellor should be loosening the purse strings. Trouble is, economists don’t know what potential is. So they have to guess. Getting that guess wrong can mean interest rates are too high/low or the fiscal policy is too tight/loose. That’s the argument in an interesting blog from economic historian Adam Tooze, which focuses on the fact that the concept is given elevated status in the Eurozone – determining what Brussels tells national governments they can and can’t borrow. This is problematic because our estimates of output gaps are…rubbish. His example? Current EU estimates of the output gap imply that Italy has little scope for catch up growth, despite truly awful growth since the financial crisis and unemployment of over 10 per cent. That can’t be right and highlights the flaws in economic modelling if it is used to underplay the role of policy makers’ judgement.

Mind the gap II: Everyone likes a bit of social mobility but we’ve not been especially good at delivering much of it in recent years. So much so that members of the last Social Mobility Commission (SMC) quit en masse. But the SMC is back. More commissioners, a broader range of backgrounds, a different Milburn overseeing things (Martina, not Alan) and a new state of the nation report reminding us that those from better-off backgrounds are almost 80 per cent more likely to be in a professional job than their working class peers. It’s an issue close to our hearts – we’ve got lots to say on access to skills, pay penalties, the intersectionality of disadvantage, and child poverty for starters. So definitely worth a read.

Cheap clothes, bad jobs: Some social and economic problems get attention that leads to real change (think child poverty in the 2000s or low paid workers’ pension saving). But sometimes problems get lots of attention and nothing much improves. That’s the depressing takeaway from this read on the awful exploitation of garment workers in emerging economies that result from the cheap fashion we enjoy here at home. It draws on two significant reports (from Human Rights Watch and the Ethical Trading Initiative). The second is particularly telling given ETI is the organisation many British retailers have been signed up to for 20 years. Both reports note the attention that gets paid to the issue in the aftermath of scandals like the 2013 collapse of the Rana Plaza factory complex in Dhaka, Bangladesh.  However, the corporate social responsibility commitments that follow have not driven the fundamental change that are the root cause of the corner cutting in garment factories we all worry about. The article also provides an interesting canter through the history of how our clothes have been produced over the 20th Century to help us understand how we got here.

Missing data. We love data. Without it almost none of our research could be done – we wouldn’t know that child poverty is rising, or that low pay is falling. The government collects (directly or by funding the ONS) the majority of the data that we use in the UK. But does that give them a huge amount of power in deciding what does and doesn’t get collected? Yes is the answer from a new blog that seeks to shine a light on data that the government should be collecting but isn’t. While the conspiracy theory flavour is overdone, the underlying point is a good one – we shouldn’t just be answering questions from the data available, but pointing out where important questions can’t be answered because the data isn’t collected.

Chart of the Week comes from the Committee on Climate Change’s report yesterday on when we should be aiming to become a country of net zero carbon emissions – by 2050 is the answer (or a little earlier for Scotland). This objective is both wholly necessary and not that easy, with real economic costs that need distributing fairly. But the report does a good job of showing that it can be done, including moving to all new cars being electric by 2035 or earlier. Making that happen requires political action (the government’s deadline is currently 2040) but also technology, where good news is to be found. As this week’s chart shows the costs of electric batteries for vehicles is falling, and falling fast. We’ve already seen the cost reductions that were expected to take until the late 2020s to achieve. This is great news in the “technology is a force for good, not just social media nonsense” stakes. If you want more climate change related charts the New Scientist has obliged. 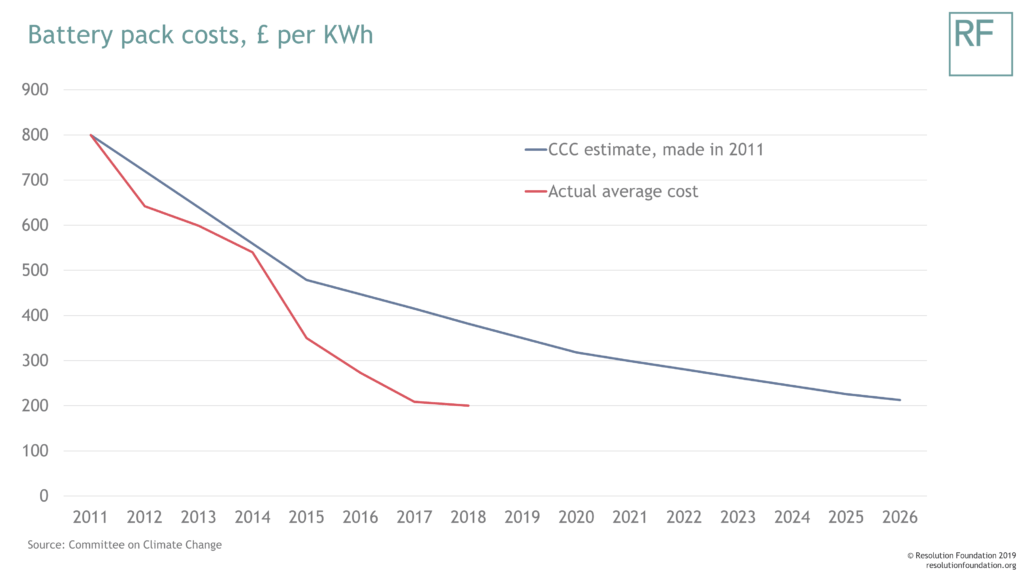