Thanks for your patience while TOTCs wandered off last week. Having entirely ignored the news, returning to sausage wars headlines on Monday was an unwelcome surprise. They speak to a serious national decline. Not in terms of what it means for Global Britain’s G7 relaunch, but because it shows our once great press have entirely given up on their alliterative duties. Opting for sausage wars when bangers battles or chipolata conflicts were on offer is not what’s going to keep our national pride up.

To restore our self-esteem, this week’s reads offer praise for Wikipedia, and news of who got their grades bumped up by last year’s A Levels fandango. And we’ve got a G7-themed Chart of the Week, given that’s going to dominate the weekend headlines.

Enjoy the weekend, whether you got an invite to Cornwall or not.

Whose grade inflation? This is a really depressing one. You’ll remember the exam grade fiasco last summer, where the bonkers policy of assigning grades by algorithm was replaced by (on average higher) teacher assessed grades after an almighty outcry. Who benefitted from the switch? Children with graduate parents is the answer, according to a survey from the excellent Centre For Education Policy And Equalising Opportunities that finds they were 17 per cent more likely to see their grades increase than those with non-graduate parents. There’s nothing conclusive on the cause, which could be pushy parents or unconscious bias (their research finds no impact on grade changes from free school meal eligibility where teachers may be more conscious of the risks of visible bias). This isn’t just of historical interest – grades will again be allocated by teachers this summer…

Wiki impact. Wikipedia stands for everything we naively hoped the internet could be: a deep resource on almost every topic, collaboratively maintained, and totally free. This database of human knowledge makes loads of existing science available to the public. But Wikipedia isn’t just sharing existing science, it’s shaping future science too. A paper I’ve previously missed shows that ideas covered on Wikipedia get more attention in future scientific papers. To prove the point the authors create new Wikipedia pages (sadly on chemistry, not economics) and find that each influenced around 250 journal articles! The stark contrast between the impact of this freely available knowledge and the absolute racket suboptimal nature of highly pay-walled academic journals that guarantee low readership rates is painfully clear. Every time TOTCs can’t share some excellent but pay-walled research it makes me just that little bit more of an anarchist.

Discriminating equally. In a crowded field, one of the more soul-drainingly depressing features of recent British politics has been our parties’ struggles with anti-Semitism and Islamophobia. Despite both main parties formally recognising their own problems, some claim they aren’t real. Which is where a new study of discrimination at the local level comes in. Researchers sent councillors a series of email requests from stereotypically Muslim, Jewish, or Christian names. They find that response rates are six per cent lower for messages likely to be seen as from Muslim or Jewish constituents, particularly in less densely populated/diverse areas. And while media attention has focused on anti-Semitism in the Labour Party and Islamophobia among Conservatives, the research shows that councillors from both parties show equal bias. But consistency in discrimination isn’t exactly something to write home about.

Pricing carbon is becoming unfashionable, as governments (the US most obviously) decide using regulation to achieve decarbonisation (e.g. banning things) is easier. And maybe economists have overdone the relative role of pricing/taxation vs regulation in hitting Net Zero targets. But carbon pricing still needs to be a big part of the answer, so read Max Roser’s great blog that offers an impressively clear case for it. He argues that we are already paying a price for emissions (i.e. the costs of climate change), so assigning a price for those emissions is about deciding who pays the price. And it’s relatively easy for governments, requiring less detailed knowledge of uncertain technologies than regulation. The only problem is that the public don’t really support carbon pricing. To which Max’s answer is that the lack of support is because people don’t believe that they work, whereas the evidence from where they have been used shows they do!

Taxing gains. This week saw a big/slightly overdone US row over leaks showing some of the super-rich ‘pay almost no income tax’. What’s going on behind the screaming here is low interest rates + tech boom = huge gains in wealth for those with assets that have grown in value. These capital gains aren’t taxed annually as income. Instead capital gains tax is paid on them if/when the asset is sold. The usual arguments for taxing capital gains in this way (in the UK as well as the US) is that it is easier to calculate gains at the point of sale (i.e. you have a price) and easier for the taxpayer to cough up (i.e. they have cash from the sale). But it also partly reflects public opinion, says a recent paper (tweet summary) on the psychology of the issue. By 75 per cent to 25 per cent we prefer to tax gains on shares when they are realised, rather than simply as asset prices rise. In part this is because we don’t think of them as ‘real’ until that point. The lesson? Those of us wanting capital gains tax reform might want to focus elsewhere. My starter for ten: raise the rates, reduce allowances and end the ludicrous situation where capital gains taxes aren’t payable on death.

As G7 leaders settle down for their pasties today, Chart of the Week explores how the importance of the G7 has waxed and waned over time. This summit, the groups’ role is on the up, mainly because a US President who actually wants to make the whole thing work has turned up. But the longer-term view has got to be that the G7’s dominance of the world economy has diminished hugely. In 1975, when the first G6 meeting was held just outside Paris (Canada joined the US, Japan, Germany, France, the UK and Italy a year later), the seven economies accounted for around two-thirds of world GDP – a figure that remained broadly stable for the next 25 years, albeit with some big changes within that total (check out Japan’s rise and fall). But things have changed rapidly this century. The G7’s share of global GDP has fallen from 65 per cent in 2000, to just 45 per cent in 2020. Why? China, which accounted for a mere 3.6 per cent of world GDP in 2000 now makes up 17.4 per cent of it. Who knows what the future has in store, but it’s certain that these days the G7, while important, represents a minority view, GDP-wise. 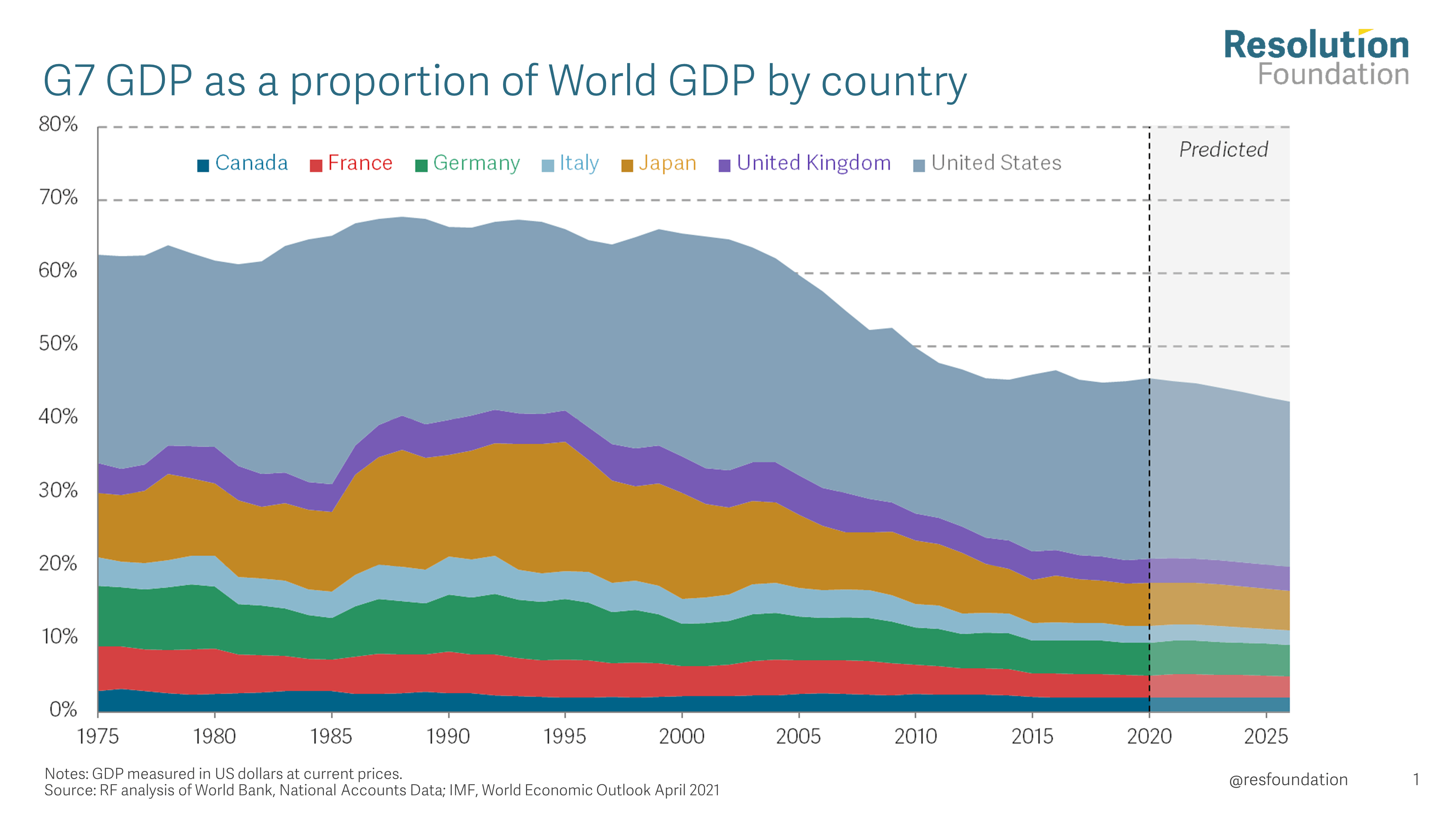