God’s not going to be giving the planet top marks on the progress score sheet this week. At home everyone’s gearing up for a Brexit decision delay, while on the other side of the world Donald Trump is denuclearising diddly-squat as his lawyer calls him a racist.

So what the world needs is an ACTION PLAN to get us out of this mess. This week we assess FIVE rescue plans from around the world – of varying degrees of scale and credibility – with a deep dive into MMT. Surely at least one of them’s got to work…

MMT to the rescue? We’ve held off covering Modern Monetary Theory (MMT) because it leads to A LOT of shouting. But since it can apparently save our economies AND progressive politics the time has come… The basic idea is that governments don’t face debt constraints because they can simply create money – the state cannot go bust. Instead of worrying about the accounting, MMT advocates think fiscal policy’s key job is to keep the economy at full employment by putting money into the economy as needed. What’s to stop a government splurging whatever it likes? Inflation. You can put whatever money you like into an economy but if everyone’s employed and there’s not much left to buy you just push up prices. In MMT world if that happens we raise taxes/cut spending to take money out of the economy and bring inflation down, leaving the Bank of England to set interest rates to keep the costs of public debt sustainable with little wider impact.

So that’s what MMT is, but there are substance problems – interest rates do matter for the private sector and governments struggle to raise taxes/cut spending. So why is it getting more traction today despite being far from new? On the economics side it’s because you can disagree with the theory but agree with the policy conclusions in times like the last decade i.e. when interest rates are zero and government should put money into the economy (Paul Krugman and Simon Wren-Lewis). On the politics side MMT is the response to US Democrats being fed up of big progressive policy shifts (e.g public healthcare) getting bogged down in rows about how they should be paid for, while Republicans happily splurge on tax cuts. Fair enough – but if you want America to become Sweden you can’t opt out of arguing for Swedish tax levels. MMT is not the answer to our economic or political woes, but it is interesting and a reminder that an idea’s popularity is about its context as much as its merit.

GND to the rescue? Earlier this month Alexandria Ocasio-Cortez published the Green New Deal (GND) in the US Congress – a blueprint to reduce the US’s net carbon emissions to zero within ten years. Backers of the bill released – and then withdrew – the suggestion that it would be paid for by MMT. The Bill has sparked a wider argument about the best radical route to dealing with climate change. The GND’s focus is on decarbonising the economy. It then adds job guarantees, healthcare, housing and other progressive (and expensive) policy objectives to ensure popular support for such radical change. A thoughtful counter-argument is that more of the focus needs to be directly on research/innovation to cut emissions – and then spreading that new tech around the world. Turns out there’s more than one GND.

Berlin to the rescue? Berliners once enjoyed a relatively relaxed housing market. But lots of people want to move to the techno capital of Europe. So it’s hardly surprising that rents have surged, prompting lots of the policy thinking. While we’re trying to encourage institutional landlords, some in Berlin want to ban mega-landlords with over 3,000 units. Just as in London you’re seeing people talking the language of rent controls, but meaning rent stabilisations. Oddly not much of the debate is on actually building more. The Germans do at least seem to get more than we do that, if you really don’t want housing costs changing massively when an area becomes popular, there’s no alternative to publicly owned housing…

Data to the rescue? Sometimes the rescue we need isn’t a knight on horseback but someone reminding us what the problem is, so efforts to tackle it can be galvanised. That’s the only silver lining to awful income stats out from the ONS this week. Two headlines stand out: first, we had no income growth for a typical household last year. Second, inequality rose as the income of the poorest fifth fell by 1.6% while that of the top fifth increased by 4.7%. Here’s an RF summary of the grim stats. Worst still our Living Standards Outlook last week highlighted that this trend isn’t going away. As Chris Giles of the FT points out (£), stagnant incomes and rising inequality isn’t a great recipe for a happy country.

Geniuses to the rescue? Does the digital revolution have a role in our current economic funk of weak wage growth and low interest rates? Yes, says a (fairly techy) new paper, which argues that tech enables the normal inputs to production of most workers and capital to be easily replicated – pushing down their prices (i.e. wages and interest rates). The winners in our digital economy are those exceptional individuals whose contributions cannot be digitised – the so called “geniuses” who garner a huge amount of the returns to productivity growth in this new economy. The paper admits that “geniuses” might just be lucky or indeed privileged to start with, before coming up with a particularly barking proposal – don’t educate the rest of the population too much because it’ll just increase the ability of geniuses to exploit the productivity of the rest of us. Gulp.

Chart of the Week
In (non-PC) fairy tales, we judge the scale of a princess’ rescue need by the length of their blonde hair. In modern Britain, we judge it by the number of half-arsed government campaigns promising to “save it”. And the High Street – the subject of this week’s Chart of the Week – is a winner in that regard. The closure of some big names shops (think HMV) has been hogging the news for the last 15 months. But the truth is the shrinking of the retail workforce has been happening for 15 years now. From an economy wide perspective we might not worry – the reductions in retail jobs have easily been absorbed by employment growth elsewhere. But it’s not all a seamless transition – retail workers now have the highest risk of redundancy or unemployment of any sector, having been low or middle risk earlier this century. Government can’t stop big economic change happening (peak stuff is our fault) – but we can help those left behind by that change. Read more in our latest report: Sorry, we’re closed. 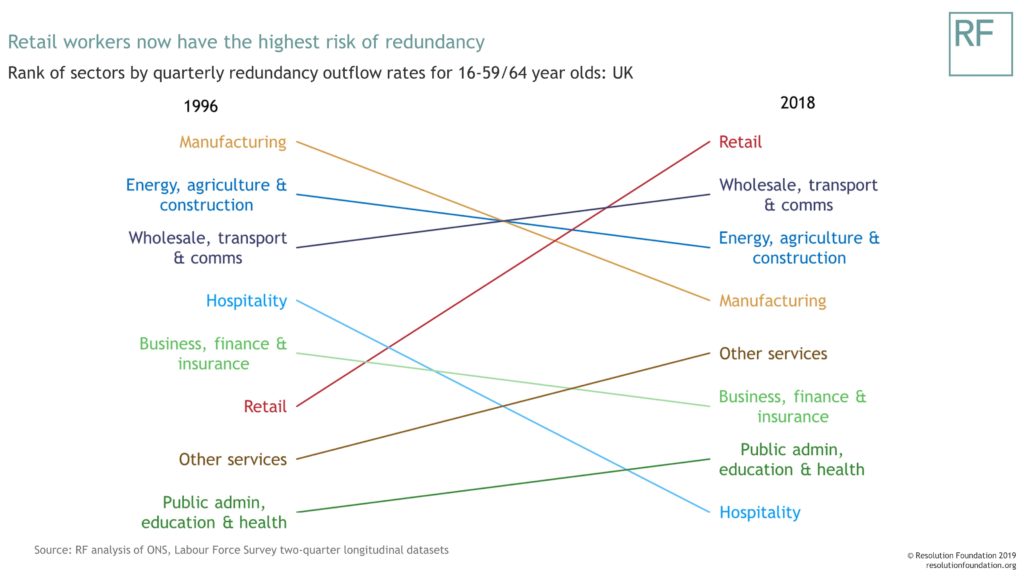