It’s alright – the military are getting involved. That’ll sort it out. Yes there’s political paralysis, but we’re talking boots on the ground people. I could not feel more reassured. Neither government or opposition has a proper Brexit plan, but Gavin Williamson has got a bunker and he’s damn well going to use it. To hold meetings in. There is after all no issue to which the answer isn’t sending the military in – from knife crime to China. It’s enough to make you want to jack it all in and head for the hills. In heavily related news it turns out that only 1 in 100 people die climbing Everest these days – which feels like pretty good odds from where I’m sitting. I’ll see you up there.

Have a good weekend – and keep an eye out for those soldiers.

Alan Krueger. On Monday we learnt that Alan Krueger, one of the most influential economists of the past 25 years, had sadly passed away. Arindrajit Dube – the Chancellor’s new minimum wage reviewer that we introduced you to last week and who shared the same doctoral supervisor as Alan – posted a suitably thoughtful tribute. Dube reflects on Alan’s intellectual presence and contributions, methodologically and substantively that have pushed economics forward. He helped overturn the idea that higher minimum wages are always bad for employment with his seminal work, Myth and Measurement. In so doing he was part of a revolution that said you might want to check your economic theory against some actual evidence. Not only did this lead to a very real revolution in policy (not least the NMW here in the UK), but it opened up a whole field of research by reminding us all that employers’ power – not just the market – help determine wages. One of his final papers returned to that theme, documenting the use of poaching bans within fast food franchises and achieving immediate effects. The former chairman of the Council of Economic Advisers to Obama really was a Rockstar economist and an important reminder that economics is about changing the world, not just running spreadsheets about it.

Parks and Recreation. We do a lot of measuring who gets what in terms of pounds and pence, but (reassuringly) there’s more to life. So what about inequality of access to green spaces? Different cities have always had different approaches to parks and woods – London’s full of them, New York not so much. But a blog this week (based on this paper) looks under those differences between urban areas to see who gets what within them. In some ways the conclusion isn’t surprising – the rich and better educated get more trees, and race matters too (although not as much). But it’s a good reminder that there’s politics even in where are parks are and their quality. And this matters – as our recent report showed, where you live (in this example near green space) has important bearing on your health and well-being. Just as with working hours, we’re due a resurgence in the politics of public space – where it is, who has access to it and who controls it.

Women on board. First the good news. Between 2010 and 2016 female board membership in large companies in the EU almost doubled – with several countries adopting quotas. Italy did so in 2011 to push up the numbers of female board members, and a new study looking at this legislation found the number of women with board seats increased by four times by 2017. BUT we presumably don’t just care about the board but about the more general question of who gets all the top jobs inside firms and who earns what. This is where the bad news starts – a better gender balance on the board did nothing to improve female representation at the top executive level or among top earners in firms. It’s almost like there are bigger structural inequalities shaping those things that a quota for non-execs can’t wish away…. It’s a long game, social change.

Rich countries, dissatisfied people. Public policy is hard – and the public like to make it harder. That’s the (uncharitable) interpretation of a new study from the OECD (summary take) this week digging into what people think about and want from social policies (i.e. welfare states). The answer: despite living in richer countries with much greater access to a variety of public services and welfare spending, and living longer, safer and better educated lives, we’re not grateful for it – with little faith that they would be there to help us if needed. But despite that we want more, not less of it, with widespread support across countries for the rich paying more to make that happen – less than 20 per cent felt the wealthy contribute enough…

Wealth taxes. Speaking of the rich contributing more… the always-great Martin Sandbu wrote a whole week’s worth of his daily Free Lunch column on wealth taxes back in February. They are very very much worth your time, covering the challenges of having such taxes and how to overcome them. His great columns are normally pay walled, but following a special request from TOTC he’s kindly lifted the pay wall for all five articles – this is what redistribution looks like in the information age. The full set covers:
1) the strange lack of wealth taxes across advanced economies despite the strong case for them, which is that wealth represents the ability to pay just as much as income
2) that wealth has grown very fast relative to incomes over the last thirty years, even as wealth taxation has flat lined or fallen, so that significant sums could be raised with wealth taxes that either have a pretty high rate on the very wealthy or low rate affecting more people
3) That the standard arguments against wealth taxes that they discourage saving/wealth accumulation are weak given that Switzerland is famous for not only saving a lot but welcoming the world’s wealthy while managing to be one of the few countries retaining a regular wealth tax
4) Practical worries about wealth taxes are also overdone. Tax competition isn’t the killer blow to them that some people argue because the wealthy are reluctant to move between cantons even within Switzerland, while payments in kind can help overcome the problems for those that are asset rich but income poor.
5)  Wealth taxes could actually boost productivity by encouraging higher return forms of investing – and could raise a lot of cash.
Enjoy.

Chart of the Week
The economy decided to provide some silver lining to the political bad news this week, with very strong jobs growth meaning the country now has the highest employment level since 1943, during the whole Second World War thing. Unemployment also hit a 44-year low. The even better news is that our recent jobs surge has been broad-based – reducing gender and geographic employment inequalities. Our Chart of the Week steps back from these quarterly changes though, and takes a near-50 year view on employment rates to show that this jobs boom is really all about… women. While the UK’s overall employment rate is roughly the same as it was in the early 1970s, female employment is up 15 percentage points, while male employment has fallen by roughly the same magnitude – although note the big fall in male employment predates the big rise in women entering work. This seismic shift has huge societal and economic implications – not least when it comes to how household incomes grow. In the words of another late great legend – It (increasingly) Takes Two Baby. 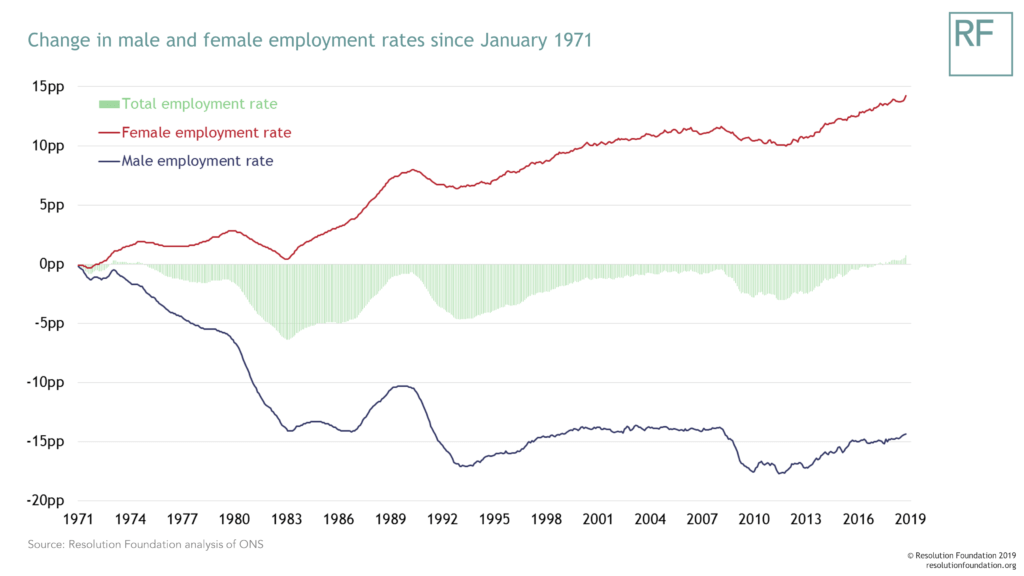