It’s all kicking off. And that’s just the kids after a week of my half-term childcare. They’d definitely be setting up an Independent Group if they knew all it took was a quick press conference and two pages of A4. Fortunately they don’t, so I’m sticking with my heavily nuanced position on why we will be leaving the playground but it’s their mum’s fault we’re doing so in a chaotic fashion without a clue where we’re heading to.

Yes that sound you can hear is the analogy snapping under the pressure, so let’s quickly get on with the reading material this week – which roams from Scottish tax to Finnish Universal Basic Incomes.
Have a good weekend,

Taxing Scots. One of the big benefits of devolution is the opportunity for policy experimentation and lesson learning across the nations of the United Kingdom. For that to work politicians across the UK would need to set the policy they thought was best, see the results and then learn from their own and other’s experiences. But is it just possible that some devolved policy is set with at least one eye on the political dividing line it creates vs the relevant Westminster policy? That’s the subtext of a blog on devolved tax policy in Scotland. Following the recent budget, it argues that yes from income tax to council tax bands we have seen tweaks to make the system more progressive than in England – but that so far the changes are small (lower earners pay £20 less income tax in Scotland than England) and arguably more presentation than radical. We agree it’s time for some bolder experimentation, not least on council tax, in every part of the UK.

Universal but inconclusive. Speaking of policy experimentation and its potential/limitations, we turn from Scotland to Finland. While we’ve been rather Brexit focused recently, the Finns have been trailing a (partial) UBI worth €560/month to 2,000 working-age adults. This was meant to be the BIG ONE – the experiment that would settle the never-ending row between UBI enthusiasts or sceptics – would the policy lead to everyone deciding to work less/chill more or improve wellbeing by opening up choices about the kinds of lives we want to live? The results are in and are… inconclusive. UBI proponents and sceptics are both holding their ground. The most balanced conclusion you can draw is that the policy made little different to employment rates and had a small positive effect on wellbeing. But what the trial really shows is that unless you’re incredibly careful in crafting policy experiments to allow evaluations you end up with a bit of a mess – as these helpful summaries argue. For instance the trial is very short term, only focused on a subset of the population and doesn’t include the higher taxes you would need to make a UBI work. So the really bad news is the UBI row just goes on and on….

Inclusive economists. In the US, people aren’t starting new parties (indeed Bernie is doing the opposite, trying to run as a Democrat despite not being a member) but new things are getting started nonetheless. This week saw the launch of a network of economists looking to make prosperity more inclusive. These are economists, not marketing people, so it’s imaginatively called Economists for Inclusive Prosperity. You see what they did there. The group is made of high-profile, policy-engaged, left-leaning economists who are opposed to both the high inequality in the US today AND the fact that economics gets the blame for lots of the bad ideas that got us to this state of affairs. They do not like people thinking neoliberalism = economics, as you can tell from this launch essay which argues that an excessive faith in markets is a perversion rather than application of economics. If that whets your appetite then you’ll enjoy this whole ebook to mark their launch, with a very welcome focus on the labour market.

The £22,800 question. Drink driving is very bad. A new study shows in particular that binge drinking (which apparently loads of us are engaging in, so don’t go holier-than-thou on me) 10+ alcohol units in a single session increases road accidents by 18.6% and arrests by 72%. The economist’s policy answer is to fine people so much if caught that we cover the huge societal costs of their bad behaviour – the paper calculates that as £22,800. That’s a lot and eight times more than the maximum fine currently set by the UK government on drunk driving. But if you want the drinking down then put the fines up.

Chart of the week is very depressing. Child poverty has been slowly rising since 2011, but remains below the peaks of the 1990s. However our annual Living Standards Outlook this week looked ahead to where this trend is heading – and the answer is to a very bad place. The number of children in poverty is set to rise by 1 million between 2016-17 and 2023-24 on the basis of projections that bring together Office for Budget Responsibility economic forecasts and government tax and benefit policies. That would take child poverty to record levels and mean a majority of children in single parent families or indeed a majority of children growing up in rented accommodation (private or social) would be in poverty by 2023-24. The cause? Not a too-hard or a too-soft Brexit, but policy choices to strip back social security support to families with kids. Choices, it turns out, have consequences. These choices need changing. 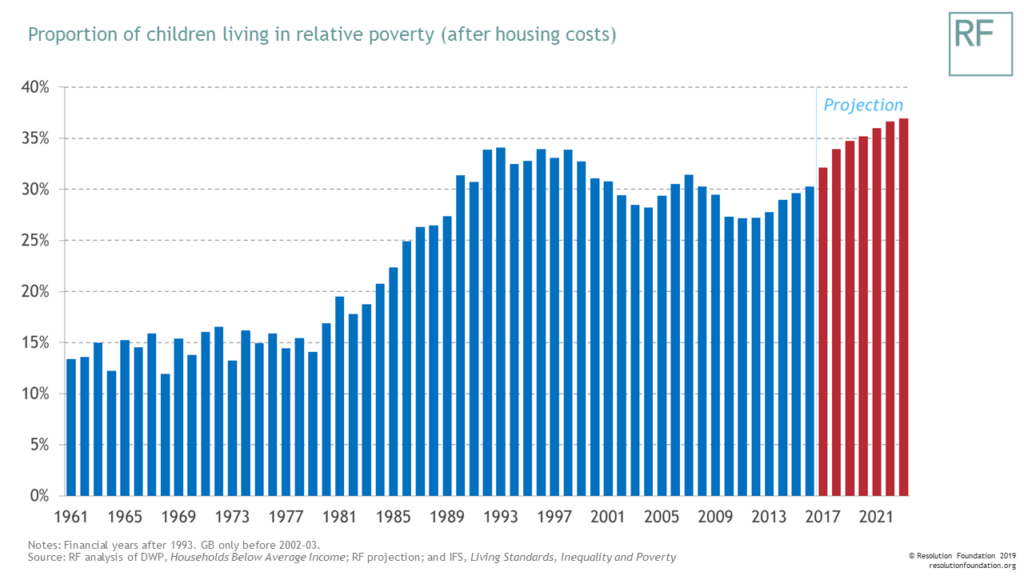