I have the absolute pleasure of spending large parts of this weekend and the next fortnight up in Liverpool and Birmingham for the main party conferences – and don’t think I’m just going to suffer alone. Oh no, when it comes to the state of British politics we are all in this together. So the reading selections this weekend and next are linked to what Labour and the Conservatives will should be talking about.

For Labour this week we’re focusing on debates about what the left’s plan for economic renewal is, or should be – from tax rises to cope with the cost of an ageing society, to contemporary poverty and the disgrace that is our betrayal of further education. What about Brexit I hear you cry – well if the Labour frontbench aren’t going to talk about it I don’t see why I should start.

Time for tax? New figures out today from the British Social Attitudes Survey bring news that the public’s support for tax rises is at its highest level for 15 years. 61% would accept tax rises to pay for the NHS, up from 40% in 2014 and 31% in 2010. Support for spending more on retirees is down over 20 percentage points in a decade, while support for generosity towards those on low incomes has been rising since 2011. This is some welcome political economy news because it means public opinion is catching up with both demography and economic reality. Generally this should be good news for Labour (after all the 2017 manifesto was largely a call for more tax and more spend), but the small print suggests that support for tax rises is highest amongst the old, who increasingly do not vote Labour…

New frontiers. If the 2017 manifesto had a lot of traditional social democrat tax and spend, this article from George Eaton in the New Statesman gives you a good round-up of the new frontiers of Labour’s thinking since then – new models of ownership (very welcome indeed), a shorter working week (a good objective in the long term), a universal basic income (yawn) and Fully Automated Luxury Communism (god knows).

Old Labour. The long building shift towards age rather than class determining who votes Labour is the topic of my pre-conference blog today. In 1974, 40 per cent of voters supported Labour in almost every age group. Age was apolitical. But today it is anything but – in 2017 a 30 year old was almost twice as likely to vote Labour as a 70 year old. Implementing a lot of the ideas above will require not just being in government but having a decent majority in the House of Commons, and that will mean coming to terms with the fundamental role age now plays in our politics. To reinforce the point the ONS released projections this week showing that nearly 90% of the additional households we’ll have in England over the next 25 years will be over 65….

A Further disgrace. This week saw a great bit of data digging from the IFS on what has happened to education spending over the past few decades. There are lots of interesting nuggets – but what stands out is the national disgrace that is our treatment of Further Education. Funding is down 8% since 2010, and comes on top of slower funding increases in the 2000s. Meanwhile Higher Education spending per student is up a staggering 22% since 2011 and nearly 60% vs 1997. It’s against this backdrop that Labour’s proposals to spend more than four times as much on removing tuition fees as on increased FE funding need to be considered. Politics is after all about priorities.

21st Century Poverty. A big Commission reported this week on how we measure poverty. Now obviously our priority is to reduce poverty rather than debating how to measure it, but its (very detailed) analysis raises some important points about what 21st Century poverty in Britain looks like. It should remind us to put to bed traditional views of poverty as being about just pensioners or families out of work for generations. The report finds that 9 out of 10 people living in poverty are in working families, and half of them are families where someone is disabled. Time to match our anti-poverty agenda to that reality.

The Chart of the Week… this week should remind us that there are limits to how much a future Labour government can simply repeat the tricks of their predecessors to expand the welfare state without raising taxes. Nostalgic Labour types harking back to the days of Attlee’s government often tend to overlook just how much priority 20th century governments gave to military spending (a point excellently made in David Edgerton’s provocative recent history of 20th century Britain). As the chart below shows, we have largely (and rightly) funded an increasing share of spending going on health and education by hugely shrinking our military spend. But there’s not much military left to shrink so this approach has basically run out of road. Lucky the public has got keen on tax rises because they’re coming down the track as our society ages… 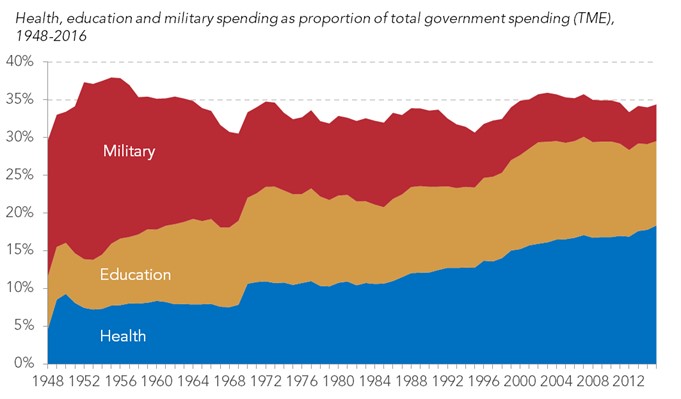