I know it’s tough. Not only is a global trade war heating up, but it’s been pissing down all week. But it’s definitely time to perk up. We’re winning in Europe, football-wise at least. To an almost socially awkward degree. We’ve got a ROYAL baby of mixed race, and (apart from a few losers) we are royally proud.

Even the Financial Times (£) is showing signs of a slight smile breaking out, reflecting on our recent report on rising well-being this century. For those of you that find all this perkiness tiring, don’t worry – the European elections are just two weeks away.

Have a great weekend everyone.

Local economics for national people. Andy Haldane – the Chief Economist at the Bank of England – isn’t your normal central banker. In place of the bread and butter speeches on interest rates, we get think pieces on the relationship between capital and labour and how the public need to be better engaged in national policy making. It’s enough to start putting economics think tanks like us out of business… This week he delved into the question of how local our economies are. The key takeaway from the speech – which can’t be repeated enough – is that anyone wanting to understand our economy needs to look (a long way) beneath the headlines. Here are three more things to ponder from it: 1) Inequality is a local issue – big gaps exist within as well as between regions of the UK. 2) Belfast has got a really big health problem – nearly twice as many people say they are in bad or very bad health compared to Edinburgh. 3) People move regions less than the nonsense myths about everyone being rootless these days imply. We’ll have more to say on this last issue in the coming weeks.

Local buses. Andy’s speech also references excellent work TOTC flagged back in February on how many UK cities do not see the agglomeration effects (i.e. productivity benefits) we’d expect from their population sizes because of rubbish local transport – which brings me back to…. buses. A recent article(blog) asks why bus use has been declining in England. It’s partly because the cost of using buses is up twice as fast as general inflation in the last decade, and that we’ve significantly reduced subsidies for non-economic but socially desirable bus routes. But there are deeper reasons too: in the UK, buses outside London were largely deregulated in the 80s, which has not been conducive to developing joined up public transport options for our cities. Times are changing, however. The National Infrastructure Commission’s boss last week called for more longer term devolved funding to improve intra-city transport. And since 2017 metro mayors have had the power to move to London-style bus systems where they set routes and fares. Andy Burnham is planning such a switch in Greater Manchester – which is a good idea if you look at how much of the city centre is currently wasted on car parks…

Ancient data. A quick shout out to a data project launched this week by a group of researchers at the Bank of England and ONS among others. The UK Historical Data repository aims to be a one stop shop for everyone that wants some properly old data – be it on the size of our economy, the public finances or wages. If medieval payslips are your thing have a watch of an enlightening recent RF event on 700 years of UK wages.

Ancient fascists. There are lots of debates out there about the link between the recent financial crisis and the rise of the far right. But what lessons does history have for us? Everyone was told in school that the background to Hitler’s rise was the hyperinflation of the 1920s in Weimar Germany. But a new studyexamines the role of a different economic trauma – the banking crisis of 1931 – in the rise of Nazi support in the years that followed. It finds that income falls caused by banking failure are associated with a three times bigger increase in Nazi support than income hits from other sources. So that’s another reason to avoid big financial crisis, if you needed one.

Modern millennials. At RF we take intergenerational challenges very seriously. On Monday we’ll be looking at why young workers unlucky enough to enter work during the great recession find it hard to shake off its effects. And next month we’ll be launching a new Intergenerational Centre as a permanent home for such work. To whet your appetite, have a read of this great new research (in blog form) into absolute social mobility between generations – or how well we do compared to our own parents. The authors estimate that over half of 30 year olds earned more than their fathers back in 2005, but just a third are doing so today. Of course most will go on to earn more than their parents later in life – the results are affected by changing education habits as well as weak earnings growth. But it does show that one big impact of slow pay growth societies is much lower absolute mobility, with big implications for how the country feels.

Chart of the week I’ve said it once many times, and I’ll say it again: you always need to look behind data headlines to understand what’s going on. It helps explain why policy makers thought things were ticking along nicely in the mid-2000s, despite the weak income growth that has become the defining feature of 21st Century Britain. While policy makers saw consistently strong GDP growth and concluded things were going swimmingly, we missed the fact that typical household income growth (the red bars) was much weaker. Had we dug even deeper to take out the impact of fast rising pensioner incomes (as the yellow bars do) we’d have realised that working age incomes were hardly growing at all. The same thing happened on falling youth home ownership – it took politicians until the mid-2000s to notice something that started back in 1989. Want to understand the country we live in? Get digging. 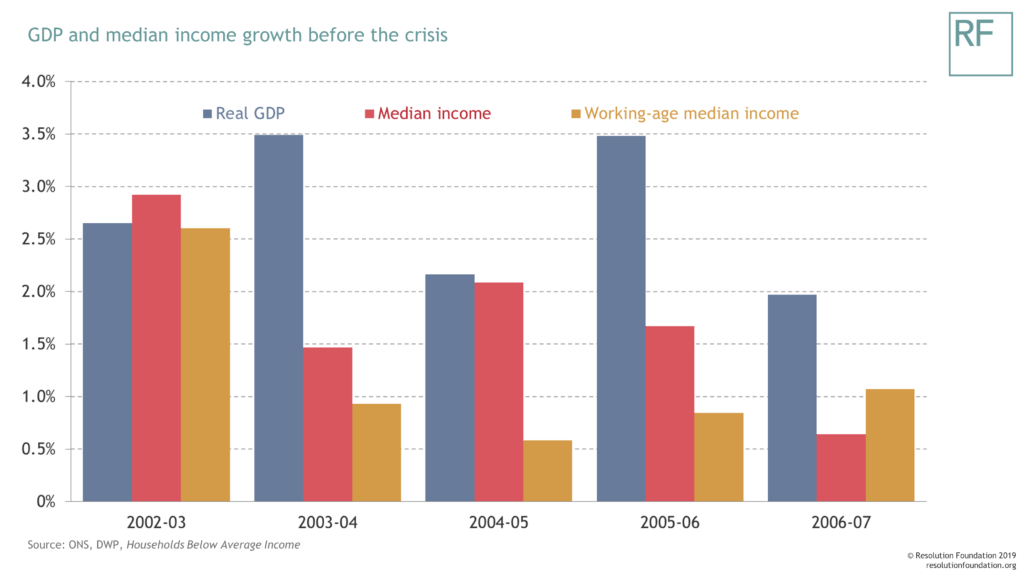