This week the plucky Kiwis beat a nation, India, with a population 280 TIMES AS LARGE in a classic David overcomes Goliath match to reach Sunday’s Cricket World Cup final. But obviously we’ve had quite enough of the little guy standing up to the real power – partly because England are clear favourites to win against NZ on Sunday, and also because we’ve decided to let a thin-skinned, misogynistic, race-baiting President tell us who can and cannot represent the UK. The first is understandable national self-interest, the second is a national disgrace.

But we had better get used to messy politics, so TOTC this week roams off the economics beat with some important reading for those seeking to understand the rules of the game in the chaos to come. If you work out what’s going on, could you let the rest of us know?

Common(s) people voting. There’s a decent chance parliamentary warfare is coming to a House of Commons near you after the summer break. You could get constitutional trauma, and there may well be what seems like very arcane (but crucial) rows about who gets to vote on what, and when. Which is why the publication this week of Erskine May – the “bible” of Parliamentary procedure – free and online (blog) for the first time is a very big deal. While many parts of the UK’s constitution are ‘unwritten’, those describing the procedures of the House of Commons were written down back in 1844 by Thomas Erskine May (and updated regularly since). Unfortunately, no-one could actually get to read them without forking out loads of £££s. So, turn Love Island off and get reading to have a hope of distinguishing your opposition days from your SO24. This stuff is going to matter.

Common people voting. It might not just be MPs getting to vote in the Autumn – we might have to actually vote for them in a general election. But how might that happen via a vote of no confidence, and what would the timetable for an election be? Interesting new analysis from the House of Commons Library explores this question – a handy backdrop to a new Prime Minister taking office with a minority government. The conclusion: if you want a general election done before Brexit D-Day on 31st October the timetable is very tight. Disgruntled Tory MPs would have to vote down their own government in the very first days of September. Of course if that looks remotely likely, the PM could just call the general election himself – saving everyone two weeks of faffing around with no confidence votes…

Straight talking. “If we want people to understand what we, the [Bank of England’s] MPC, think is the necessary path of interest rates to achieve the inflation target, why not just tell them?” This is a fair question asked by a member of that interest rate setting Monetary Policy Committee, Jan Vlieghe, in an interesting speech today. Jan (an associate of our own Macroeconomic Policy Unit) argues that the Bank of England’s current approach of basing their economic forecasts on what markets expect them to do with interest rates leaves the public reading between the lines to understand what the Bank themselves intend to do. There are well-evidenced benefits to clear and transparent monetary policy – it can influence our economic behaviour based on what will happen tomorrow, not just what is happening today. So a suggestion worth taking forward.

German inequality. Everyone’s always telling us to be jealous of the Germans, because they make stuff and sell it to other countries. But it’s worth a read of the IMF’s annual assessment (blog) of Europe’s powerhouse economy to understand the challenges they face. The most interesting section looks at the relationship between the current account surplus many Germans are proud of (selling more abroad than they import) and rising top-income inequality. Over the last two decades exports have surged, boosting firms’ profits. But because the ownership of those firms is highly concentrated among wealthy households (much more than in the UK) the export success has helped pushed up the income share of the top 10 per cent from 25 to 30 per cent this century.

Happy parents? Children make parents happy, don’t they? Social scientists have generally suggested the answer is no. The likes of Daniel Kahneman have shown that parents compare the enjoyment they receive from looking after their children with doing housework. This poses an interesting demographic question: why aren’t fertility rates lower in countries where people have the economic choice to have less kids? But a new body of research (and here, plus summary) suggests that there is a link between happiness and kids – but it’s that the happier you are the more likely you are to have kids. Whether you stay happy is another question entirely – on that front it helps to have cash and an absence of pressure at work. So if you want your country to be popping out the babies you need to help families with the (big – I say from personal experience) financial pressures of doing so, and work/life balance. In summary: children ≠ happiness = children.

Chart of the Week Geographic inequality is a hot topic, and new Resolution Foundation research this week showed why people are right to worry – the UK is one of the most unequal countries in the OECD when it comes to productivity gaps (what we call variation in the chart). But there’s a twist to this story. The UK’s geographic income divides are much smaller (that’s redistribution in action) and have actually been falling in recent decades (that’s a strong labour market and a dysfunctional housing market in action). Is the lesson to stop worrying about the north/south divide? No, it’s that we need: 1) devolved economic leadership to tackle productivity gaps 2) to value our national tax/benefit system 3) to value high employment because it’s crucial to reducing inequalities between places and people. 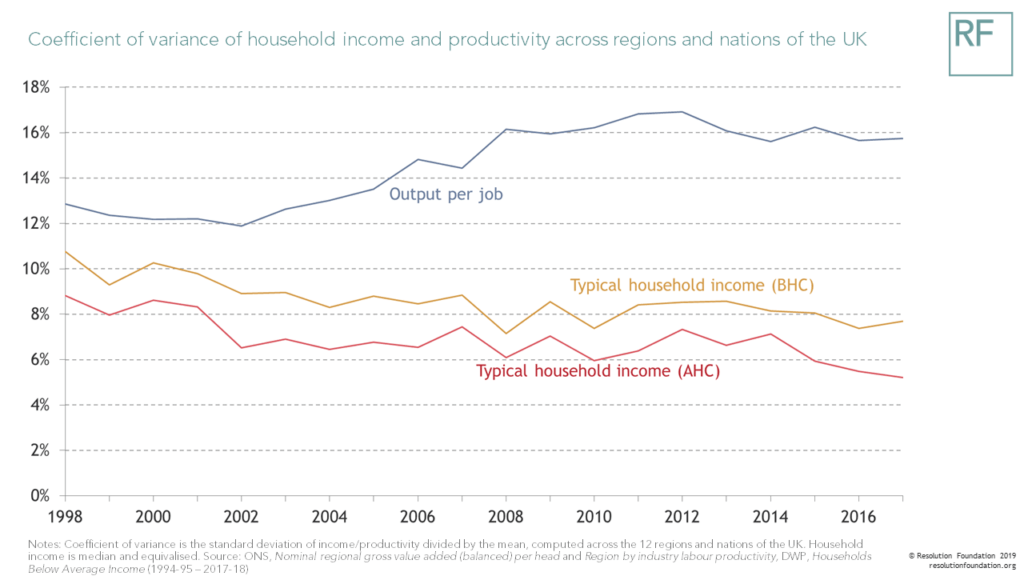