It’s been a week of BIG shocks. Theresa’s off. Who knew. Boris is running. Gosh. Labour’s said it won’t do a deal on Brexit. Well knock me down with a WAB. We’re too unequal a country. Quelle surprise. And the climax to Game of Thrones involves a lot of people dying. Who saw that coming.

Then again maybe lots of you haven’t even watched Game of Thrones – and I can’t blame you. The gap in all our lives isn’t really a never ending saga of sub-par individuals competing to rule a deeply divided land surrounded by sea.

In any case, reading TOTC’s material each week should come before any TV, be it fantasy or farce the news. Enjoy this week’s selection and have a great, even if unsurprising, weekend.

Filling in the numbers. Some of the world’s greatest inventions came about because people were too lazy to do a certain task. One invention very close to our hearts – the spreadsheet – is a prime example. Rather than making tedious alterations to blackboards or paper ledgers, it made much more sense for one accountancy student (with a programming background) to create an electronic spreadsheet. This is the latest subject of Tim Hartford’s brilliant podcast – 50 things that made the modern economy. The spreadsheet is really an example of how technology can automate jobs (or not as it turned out), fundamentally change business models, and eliminate human error. Certain jobs (including most of those at RF) wouldn’t exist without the spreadsheet. But, tech can also magnify human error. Just ask JP Morgan, where an Excel error potentially cost them $6bn.

The inflation problem. Why has inflation not yet got back to its 2 per cent target rate since the financial crisis, despite central banks putting their foot to the floor by slashing rates and buying up bonds galore? That’s the (good) question asked by Benoît Cœuré from the European Central Bank this week. It’s particularly urgent in the euro area and US context given inflation rates are stubbornly below target (we’ve managed higher inflation – mainly by repeatedly tanking the pound). Part of his answer is that we’ve underestimated the impact of a long-term shift away from manufacturing, and towards services. This matters for how long it takes inflation to respond to monetary policy shifts – prices change much less regularly in services than for goods. Only 5.6 per cent of service prices change every month, compared to over 9 per cent for goods, and over 20 per cent for some foods. It’s an interesting paper – but also a very convenient answer for the ECB as it allows them to believe that policy will have the desired impact eventually. The good times are always just around the corner…

The inequality problem. British inequality is all about the 1980s. That decade gave us world-leading inequality rates that need to come down. But despite political furore over rising/falling inequality in Britain, the fact is that it has remained much the same since the early 90s (unlike poverty rates for different generations, as we’ll show at an event next week). Inequality is back in the spotlight thanks to a great new project from our friends at the IFS. Earlier this week their new five-year Deaton review (launch doc) began its journey to broaden the inequality debate beyond wealth/income differentials to include other ways to think about living standards like health and opportunity. Most importantly the review isn’t just about better understanding the inequalities we live with, but making proposals for doing something about them. Amen to answers.

Beauty parade. We’ve previously discussed the value of canals and parks in urban areas. New research brings this together by claiming that a City’s beauty really does boost economic growth – by attracting high-skilled workers. Given the UK’s problems with low job-to-job moves among young people – an issue we’ll be expanding upon in the coming weeks ­– perhaps sprucing up our cities should have a bigger role in our industrial strategy? Birmingham is going to need better buses and a bigger make-over to get the Midlands Engine chugging.

The Trump effect. Donald Trump is a disaster for the EU. Not least because he seems pretty keen to see it fall apart. But maybe he’s a blessing in disguise. That’s the conclusion of an interesting new articleinvestigating how the election of the Donald affected the popularity of the EU in Europe. Comparing surveys four days before, and six days after, the 2016 presidential election, the research suggests that Trump’s victory caused a significant increase in the EU’s popularity immediately after the election. This ‘Trump effect’ was particularly high for people who viewed their country as economically struggling, and among the political right. So, Trump’s victory appears to have widened support for the EU into part of the political spectrum where it’s often struggled to build support.

Chart of the Week And now for some GOOD news on (wealth) inequality. At the start of the last century the world was a very unequal place wealth wise – and we were leading the pack. The aristocracy were loaded. Over the course of the last 100 years a combination of wealth destroying wars, aristocracy-shrinking inheritance taxes, and home ownership growth has meant that we are much more equal wealth wise. Indeed we’re more equal wealth wise than the likes of Germany (too many family companies) or Sweden (which has disgracefully abolished its inheritance tax). Now, there’s obviously a danger that this good news gets taken too far – we shouldn’t forget that while income inequality is too high, wealth inequality is twice as high as that, and generational gaps have grown. Most importantly we need to recognise absolute pounds and pence wealth gaps between the haves and have nots have grown, because there is a lot more wealth around. The result? Working hard, having a pretty high income and saving frugally is no longer enough to become rich in 21st Century Britain – you’ll need to inherit or marry your way to real wealth. 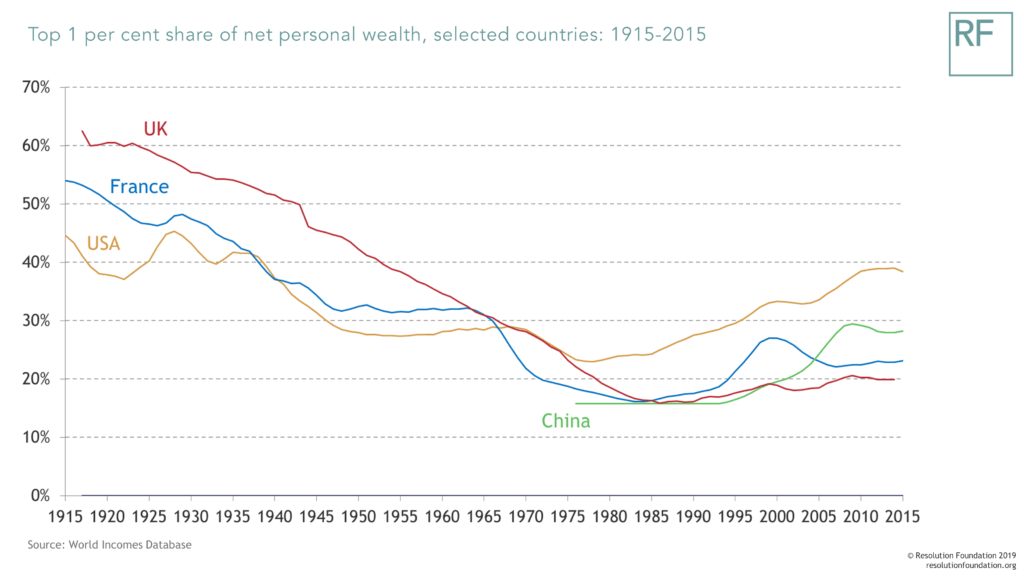