It’s time for a break from the rain and the ludicrous tax cut promises the Tory leadership election has given us (on which more below). So not only does this week’s Top of the Charts come to you from (ludicrously hot) Vienna but we’ve gone all international in our reads. From big moves to empower workers in New Zealand to big literal moves in Germany, as the population shifts from east to west, let us take you round the world.

Enjoy the break and don’t worry ­– our green and pleasant sodden land will still be there when you get back.

Germany moving. This is one of my favourite-ever TOTC reads. After German reunification most people believed mass migration of East Germans to the West would end ­– as freedom and prosperity spread east, humans could stop fleeing west. But it turns out demographic forecasts are as bad as economic ones… Fascinating new work – using superb graphics – tells the story of what actually happened. Between 1991 and 2017 nearly a quarter of East Germany’s original population moved to the West. A lot moved south (to Bavaria and its strong economy) while Hamburg in the north absorbed the single largest number of arrivals. The opportunity to move west will have helped many achieve higher living standards, but the demographic shock for the East was compounded by a falling birth rate – some places have lost almost 40 per cent of their populations. But there is also a warning in the research against assuming trends go on for ever – for the first time since reunification more people are moving from west to east (to the likes of Potsdam or Leipzig) than vice versa…

India rising(ish) PM Narendra Modi recently won re-election, having seen India become the world’s fastest-growing major economy in his first term. But is everything as rosy as that implies? At the end of May new data showed India losing its top spot, as first quarter growth slowed to 5.8 per cent, below the 6.4 per cent growth registered by China. More importantly, great new research this week suggests that growth was significantly less stellar over the past half-decade than the official growth figures suggest because of methodological problems. In it a prominent Indian economist compares the official GDP stats with what lots of real world data (electricity use, vehicle sales etc) suggests happened. The conclusion? That growth may have been overstated by an average of 2.5 per cent a year between 2011-12 and 2016-17 (ie growth of more like 4.5 per cent than the much trumpeted 7 per cent). That’s still growth we’d kill for but, as the author says, it means “the Indian policy automobile has been navigated with a faulty, possibly broken, speedometer.”

America ageing. We all know developed countries are ageing, and more elderly people will need more care in the decades ahead. But how will that care be provided, given that the cohort about to enter retirement has fewer children than its predecessors? The aptly named conversable economist draws on a few recent studies to spell out where this is likely to lead us: to the nursing home. Among people over 50, having one fewer child increases the probability of having stayed in a nursing home over the last two years by 1.7 percentage points. That might sound small but it’s as big an effect as being in poor health or of being ten years older. Put the ageing population together with the old having less children and researchers estimate that demand for formal care will more than quadruple.

Kiwis fair paying. Everyone loves Kiwis and who doesn’t like fair pay? So New Zealand’s new policy of establishing Fair Pay Agreements in some industries are worth paying attention to. The goal is to set minimum standards of pay and treatment via bargaining between workers representatives and employers. Oddly they’ve received very little attention so far in the UK, despite the UK Labour Party also wanting to introduce sectoral collective bargaining. The New Zealand government argue that it will help tackle low pay and low productivity – because firms won’t be able to compete on low pay, and will instead do so on technology and quality. They are proceeding cautiously, with heavy business and union involvement in designing the scheme. But make no mistake, this is a big change to their labour market. Alongside the Australian wage board approach (sets of occupational minimum wages) this all means those thinking about wage reform in the UK should keep their eyes on the Antipodeans.

Irish clicking. A tight labour market, with low unemployment and firms having to compete for workers, is meant to drive up pay. This is about supply and demand for workers. Now novel research in Ireland comes at this issue from a new angle – the balance between online job postings for a particular job type (demand) and the number of clicks on them from potential applicants (supply). It finds that this new measure of labour market tightness can tell you quite a bit – fewer clicks per ad is related to higher salaries. So click away, but on the job ads no-one else is clicking on…

Chart of the Week
The Conservative Party leadership contenders know they can’t just bang on about Brexit. So they’ve been competing on who LOVES cutting taxes the most. While you’d expect tax cuts to be flashed, the scale of what’s being offered – ranging from £10bn to over £30bn – feels out of step with the state of our public finances and public services (more people now want to see taxes and spending rise than fall). The leading candidate’s plan is also way out of step with the needs of ‘just about managing’ families (remember them?). Boris’ policy to raise the higher rate threshold of income tax to £80,000 would cost £10bn, and yet six in seven people would gain nothing from it. 83 per cent of the gains would go to the top 10 per cent.  As I wrote earlier this week, there are lot of questions Britain is asking of the next Prime Minister – this isn’t the answer to any of them. 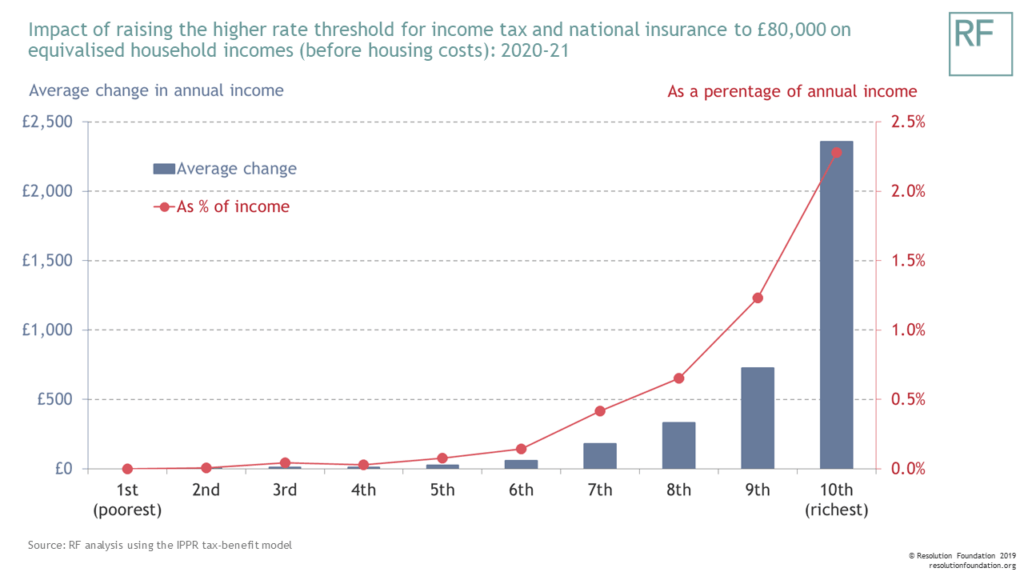