So Parliament’s off. The Speaker is too (rather more permanently). This is clearly a crisis. With millions of Brits addicted to the nightly Commons meltdowns, dark times are ahead. Where we once had soaps, all that’s left these days is psephology.

Now the addicts out there may get some relief from prorogation cold-turkey if the Supreme Court calls the whole thing off – but in case not RF is stepping in to fill the gap of a functioning government and sitting parliament with a bonanza of events next week.

On Monday we’re discussing enforcement – against breaches of employment law, rather than constitutional norms. Tuesday’s event is about the in-no-way-timely question of what makes a good Prime Minister, before it’s Yellowhammer time on Thursday as we debate what the economic response to a ‘No Deal’ Brexit should be. So turn Eastenders off and the RF youtube channel on.

And even if we can’t fill that gaping hole in your life, don’t worry – there’s cheap fags and booze on the way. Live duty free, die young as the saying goes.

Volatile tweets. Donald Trump tweets. You may have noticed. He’s racked up over 10,000 tweets since his inauguration, all of which have been studied by lucky analysts at JP Morgan, who are attempting to evaluate their effects on stock market volatility. They’ve created the appropriately-named ‘Volfefe’ index (referring to Trump’s infamous ‘Covfefe’ mis-Tweet of 2017). It has some interesting conclusions – Trump’s tweets actually moved the market much more in recent months. Traders were relatively relaxed when the President was focused on stoking culture wars, but now he’s switched to ranting about monetary and trade policy they’re all ears. Not to be outdone, Bank of America also finds that on days Trump tweets a lot the stock market tends to fall, and it rises when the leader of the free world has better things to do. So, new economic plan = take the twitter away.

Proroguing Britain. Some people were big prorogation fans before it was famous… Paul Seaward – until recently the Director of the epic History of Parliament project (well worth a look for political junkies) – provides welcome relief from today’s controversies with an interesting canter through the history of prorogation and adjournment from the late 1300s onwards. The theme: tension between monarchs (or governments) and the Commons about who gets to decide when Parliament sits – particularly when that has implications for what business gets done. Check out the 1677 row about the government wanting rid of a Commons it felt was meddling in foreign affairs. Nice to know some things never change.

Productive #MeToo. One to add to the achievements of the #MeToo movement: higher productivity. So argues a recent study focusing on the heavily-male dominated world of fund management. Neanderthals sexually harassing colleagues gets in the way of a productive workplace, or so the non-controversial theory goes, and the research provides empirical evidence to back this up. It finds that male and female fund managers performed equally well in the years preceding the Harvey Weinstein scandal – but women outperformed men after it (by over 3 per cent in March 2019). Among individual firms the authors also show that those introducing policies to counter harassment saw a significant improvement in the performance of female-managed funds. Hopefully basic human decency got people to support this cultural change – but it turns out even those who only care about their bottom line should sign up too.

Beautiful maths. Now this is very good news for those of us using maths and arguments to make a living: turns out they can be beautiful. A recent paper ($ but see article) suggests that even those not spending their lives staring at equations can appreciate beauty in mathematics as we do in art or music. Non-mathematicians were asked to look at four mathematical proofs and to rate their similarity to a set of four famous paintings and four pieces of classical music. Overall, people had surprisingly similar ideas about which paintings and pieces of music had most in common to the maths – suggesting shared intuitions about the beauty or aesthetic appeal of mathematics. So, put your paintbrush or violin away, and get out the calculator.

Robo-taxes. If robots are going to steal all of our jobs (which they’re not), should they at least be paying tax? Not according to this article from Noah Smith, which is worth a read given US presidential candidate Bill de Blasio’s proposal to heavily tax companies that invest in automation. It is important to support workers through changes in the labour market, but ‘taxing the robots’ to do this probably isn’t the answer when our problem is trying to escape a low investment/low productivity world.

Insights (originally published in The Observer) – Good cop, female cop. Friday brought very grim news, with data from police forces showing that domestic violence-related killings reached a five-year high last year. The victims in the majority of the 173 homicides were women. But what is to be done? The government is promising to return to domestic abuse legislation when parliament returns, and policy discussions often make the link to knife crime, given the number of such murders involving knives. It may be worthwhile for policymakers to focus not only on what powers exist within our criminal justice system, but on who is using those powers. That is the lesson from recent research examining women’s integration into the US police force from the late 1970s to the early 1990s, when the proportion of women in active policing roles tripled from 3.4 per cent to (a still tiny) 10.1 per cent. What difference did that make? Quite a significant one in some areas. The study showed that women were more likely to report violent crime in areas where there was a higher proportion of female officers. The improvement wasn’t just in the reporting of crimes; in these areas, there were falls in domestic violence offences and rates of intimate partner homicides. However, the effects were only seen if women were employed as police officers rather than in other roles within the force. Having this evidence at the forefront of our minds could make a difference: last week, a campaign to recruit 20,000 police officers was launched in Britain, where more than two-thirds of officers are still male. Who the police are, not just how many of them there are, matters to tackling crime.

Chart of the Week. Everyone’s talking recessions these days. Google searches for the term are ballooning, as our chart shows. And it’s not surprising. Yes, stronger than expected GDP (and wage) growth this week have reduced the chance that the UK is already in a recession. But the big picture is that we’re living in turbulent times, combining a global growth slowdown with Brexit uncertainty. So are we ready for the next recession? No was the answer from our new comprehensive assessment (summary) of the UK’s macroeconomic policy framework. The Bank of England can’t cut interest rates significantly or achieve a whole lot more via quantitative easing – meaning they can probably only provide a quarter of the support the economy would need in an average recession. So the Treasury is going to have to pull a lot more weight with spending increases or tax cuts – something we’re not spending enough time planning for. This isn’t just about the UK either – across the Channel the Euro-area is already knee-deep into this. On Thursday the ECB (for the last time under Mario Draghi’s leadership) announced it was throwing what was left of the kitchen sink (more negative interest rates plus restarted QE) at the problem of a slowing economy. Those policies might be welcome, but the main takeaway was central bankers spelling out that there wasn’t much more they can do – it’s time for governments and fiscal policy to step up to the plate (see Bloomberg’s take). 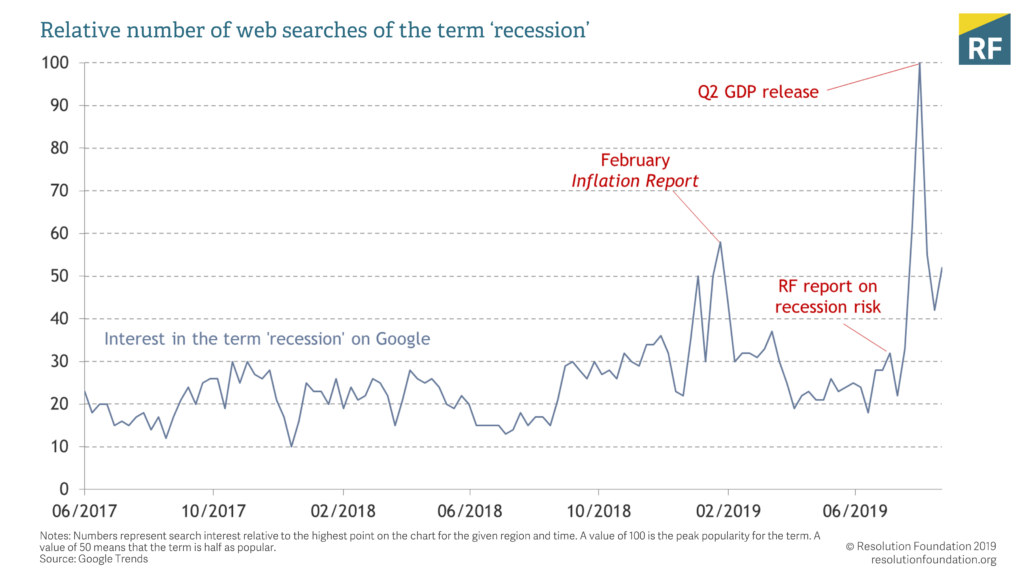