Christine Lagarde is a very talented woman, but she’s also a very lucky one. Her current role running the IMF came up rather err…unexpectedly and she now gets to head to Frankfurt to take over as the new head of the European Central Bank, despite saying many times that she had no interest in the gig.

Some have been moaning that she’s not an economist, having trained as a lawyer. Personally I think we should all take this as a massive positive signal that it is possible to change career later in life. I’m planning on a pop career in my 50s. You can be whatever you want to be people.*

*this is statistically a very very long way from being true.

Taxing US wealth…. is taxing. That’s the key argument from US economist Larry Summers and economist/lawyer Natasha Sarin, who believe the claimed $200bn+ revenue potential of Elizabeth Warren’s 2% wealth tax on those with $50m+ might be exaggerated by up to eight times. They believe something nearer $25bn might well turn up. Why the big difference? Basically, tax avoidance. Summers/Sarin look at US inheritance tax, which brings in far less revenue than you’d expect given how much wealth we know is out there, to remind us all that it’s actual rather than theoretical tax revenue that matters. Economists Emmanuel Saez and Gabriel Zucman (who produced the $200bn+ estimate) have hit back – pointing out that the $25bn estimate (which to be fair Summers/Sarin say is a lower bound) implies accepting a near 90% avoidance rate by assuming that it’s impossible to legislate for a wealth tax that isn’t riddled with exemptions that the super-rich exploit. So you can think about the Saez/Zucman estimate as what the tax ‘could’ raise if it was designed properly, while Summers/Salin have (as they say themselves) set out the lower bound of what it ‘would’ raise if designed poorly and avoided by the wealthy.

Taxing UK wealth. No we don’t have enough super wealthy people to raise much cash from a tax on wealth over $50m. But the debate above still matters because our existing wealth taxes are also riddled with exemptions that reduce revenue and undermine trust. Helpfully the government’s own Office for Tax Simplification has today set out some welcome improvements to inheritance tax (IHT). One stands out. They note that some assets avoid both IHT and capital gains tax (CGT) when we die. If I buy a business and pass it on at death, neither tax is applied. But if I give it away while still alive, CGT would be charged. As the OTS notes, this creates a perverse incentive to hold onto assets until death, and rightly recommends removing the CGT exemption on such assets. Another key issue they highlight is the ludicrously broad IHT exemption for farms and businesses, which costs almost £6bn over five years. The OTS is not allowed to set out proposals to reform this. But don’t worry, we have.

Amazon’s latest hurdle. In further quango news….today the Competition and Markets Authority (CMA) announced an investigation (less techy summary) into Amazon’s significant (£457m) investment in Deliveroo. This is unusual because no merger been announced – it’s simply one company investing in another. So what’s going on? According the CMA it had ‘reasonable grounds for suspecting’ that Amazon and Roofoods (Deliveroo is just the trading name) have or might ‘cease to be distinct’ ie that they’d be effectively merging to some degree, with implications for competition. This reflects a growing anxiety that big tech firms have too easily been able to spread their dominance into new markets, or reinforce their existing positions, via acquisitions (think of the mistaken waving through of Facebook’s acquisition of WhatsApp). Given that big firms have become more powerful over time, this renewed focus on competition policy is certainly welcome.

£s or security? What would you pay for a permanent contract for your job? A lot is the answer from new research (blog) that says atypical workers in the UK would give up half of their hourly wage for a permanent contract. Now that figure is obviously enormous, in fact unbelievably so. But the general point is an important one – flexibility is nice to have, but security really matters. Summer holidays are also important – with the average worker in the UK willing to pay 35 per cent of their hourly wage for 28 days paid annual leave. Fair enough if those holidays are guaranteed to have the sun of this week.

Whose jobs do the robots take? You’re all probably bored to death by all the job-killing robots chat of the last few years – but stay with me for a more interesting take than many. New research encourages us to think about a world (ie the real one) where a given technology comes along, but some firms adopt it and others do not. By looking at the experience of many Spanish manufacturing firms over the last three decades the research shows that robot-adopting firms create new job opportunities as they grow, while those firms that don’t embrace the new tech see employment fall. This is another reminder that it really matters what firm you work for, not just what occupation you do – something too much research ignores. For a historical sweep on the impact of technology on jobs and inequality you can watch our recent event with Carl Frey and Diane Coyle, discussing the former’s new book: The Technology Trap.

Chart of the Week We’ve seriously got to pull our fingers out people…. is the message from this week’s chart. Our post-crisis productivity slump continues with figures out this morning showing that productivity in early 2019 fell at its fastest rate in nearly three years. Despite all the news you hear about new tech, we’re producing less for each hour we work than a year ago. This isn’t how it’s meant to work. As our Chart of the Week shows, productivity is now down 28 per cent compared to if we’d continued on the pre-crisis trend. The history books will look back on the last decade and say the UK had a huge financial crisis and then Brexited. But for economic historians, the not unrelated but truly unprecedented lack of productivity growth will be the defining feature of this era. Not least because it’s driven the stagnation in people’s living standards. So better make it a productive weekend everyone. 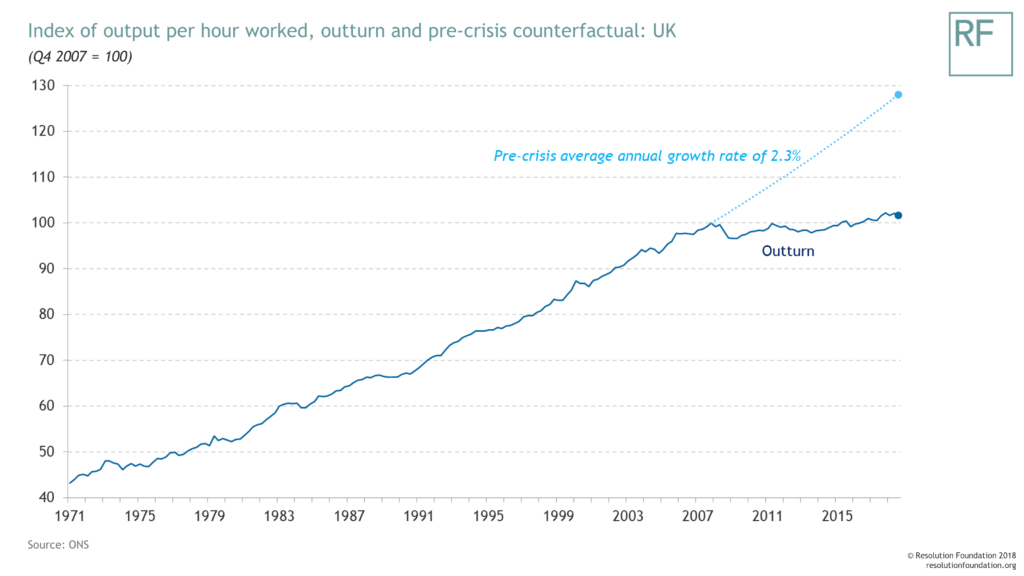