The (selfish) good news is that I’m ending this week Covid-free. The (rather more important) bad news is the Spring Statement, which goes in the ‘not fit for purpose’ bucket. Chunks of Government seem surprised by the universal kicking it’s had – spending over £10 billion on tax cuts usually buys you at least a good Telegraph front page.

But that’s what happens when the Chancellor seriously misjudges the public mood because he’s focused on rebuilding his tax-cutting credentials within the Conservative Party. In normal times you could get away with that, but heading into the biggest living standards fall on record is not normal times.

Successful politicians have to pay attention to their party, but the sustainably successful ones focus on answering the questions the country is actually asking right here, right now. The furlough scheme did that when the question was how to avert mass unemployment. The Spring Statement didn’t now the question is how do we as a society cope with the surging price of essentials. The Chancellor rightly says “it’s impossible to fully protect” all of us. He’s just missing the obvious next line… so you prioritise protecting the most vulnerable.

As always, we’ve got a TOTC special digging further into the Spring Statement. The Resolution team’s great overnight response document covers our analysis of the announcements/forecasts, so in TOTC I’m stepping back to some wider reflections it’s prompted. Let’s start from some micro policy lessons, and build back up to the big picture of what this tells us about 21st Century Britain.

It’s called the tax AND benefits system for a reason

The big additional help announced by the Chancellor for 2022 was a £6bn increase in the threshold over which you start paying National Insurance to £12,570. If you’re cutting income taxes this is the most progressive option out there. But it’s a bad answer on its own to all of us seeing our energy bills surge, because the cash gains are greatest for those on middle and higher incomes (only £1 in £3 goes to the bottom half). The main reason for this is well understood – only those working (potentially) pay National Insurance and better off households have more workers in them. There are around 5.5 million economically inactive households across the UK, including many with disabilities – not to mention over 11 million retired households ­–  who are seeing bills soar but won’t get anything from this tax cut.. But a second reason has had less attention: even lower income households that do benefit will often benefit by less. This is because Universal Credit (UC) is means-tested on the basis of post-tax income. For many (but not all) UC recipients the result is that for each £1 of tax cut, they see a 55p fall in benefits. Our first chart shows how these two effects play out. 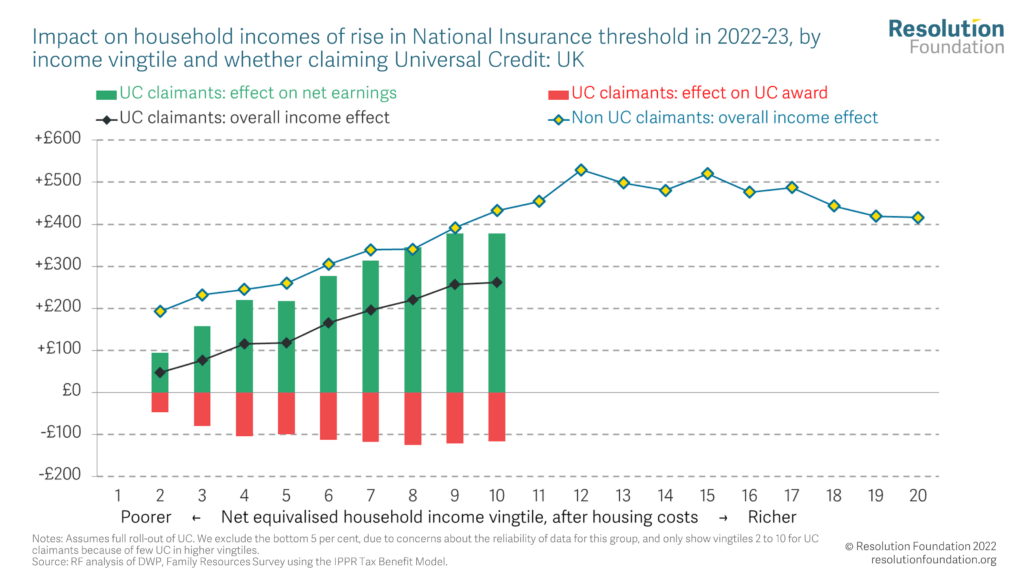 Among households not on UC the middle and top gain more. And when we look among lower income households, those on UC (who will be more likely to have kids) gain significantly less. The lesson? Cuts to income taxes have never been well targeted ways of helping the poor, but now we’ve got UC they’re useless.

Clearly the big problem for this Spring Statement was headlining on an Income Tax cut tomorrow while refusing to ensure benefits kept pace with surging inflation today. But even if you just look at the Income Tax cut side of things, it’s worth reflecting how little sense they make.

We’re now planning to cut the basic rate of income tax by one penny in 2024, at a time when we’ll be mid-way through a major tax rising freeze to the starting thresholds for Income Tax (frozen until 2025-26) and National Insurance (frozen from 2023-24). In fact, the final two years of those freezes are now essentially paying for the basic rate cut: by total coincidence, they raise/cost the same – £6bn. Obviously just ending the freeze early wouldn’t have been as announcement-friendly a tax rate cut. But given there’s no positive coverage anyway that hardly matters. And the madness of the Chancellor raising our taxes so he can cut them isn’t the end of the lunacy. Because the effect at the individual level of the tax cut and tax rise are different, the net effect is to help higher earners while hurting lower earners. (Working-age) employees earning below £34,000 – and retirees with incomes below £26,000 – are worse off from this combination, while those above benefit. As the next chart shows, at the household level only the top quarter of households come out on top. It’s nuts. 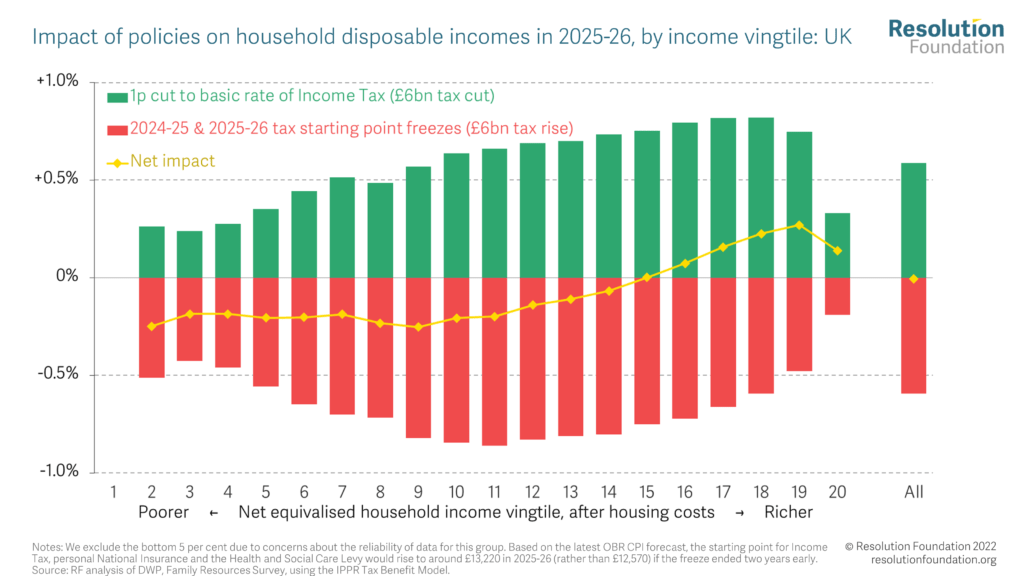 There are many dangerous ideas out there beyond the simple thought that a tax cut is always good politics. Bits of the right saying that policy doesn’t matter, and chunks of the left saying the same of growth, are particularly pernicious. Both breed fatalism. Focusing on what’s happening to absolute poverty levels illustrates the point. 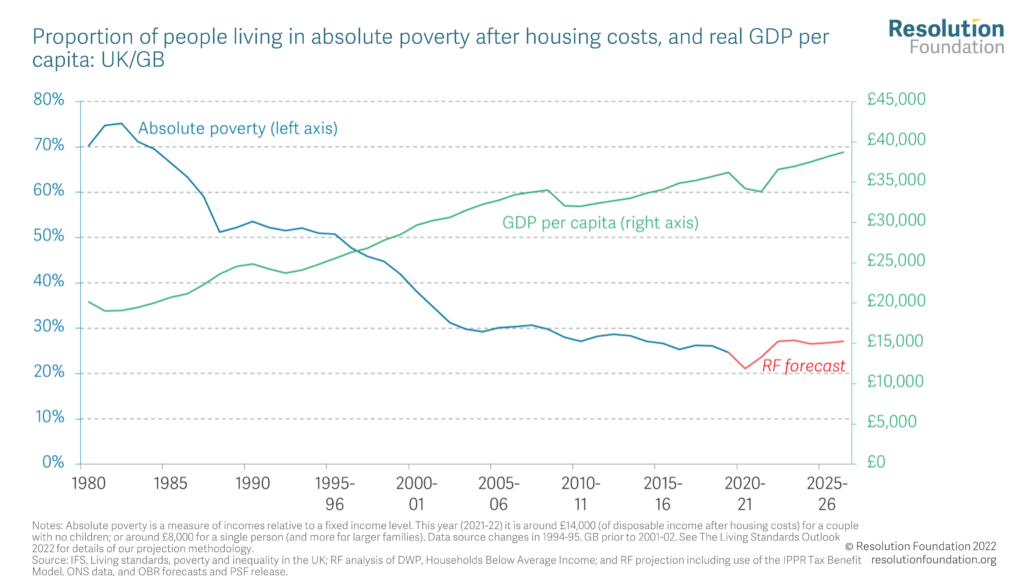 Policy matters when the failure to uprate benefits in line with surging inflation is a major reason why the number of people living in absolute poverty (using the 2010-11 poverty line) is projected to rise by 1.3 million (including 500,000 children) in 2022-23. More positively you can see that Rishi Sunak’s major benefit increase in the pandemic didn’t just protect average household incomes well: it drove down inequality and absolute poverty significantly in 2020-21.

But the chart shows something else too. Absolute poverty fell dramatically between 1995-96 and 2004-05, but progress has been truly terrible since then. The big reason absolute poverty stopped falling? Not because whichever policy maker you don’t like was evil, but because the economy has to a painful extent stopped growing (stuffing the poor with rising housing costs hasn’t helped – but that’s back to policy).

When it comes to policy and growth, what we need is to put the fatalism aside because 21st Century Britain needs to look itself in the mirror and realise…

…we must do better than this

I’m going to put this gently: we need to pull ourselves together. Britain has drifted into a period of relative decline. That’s why our living standards are getting stuffed while our newspapers dwell on culture wars. It’s why our public services are stretched despite our taxes rising. It’s why concerns about inequality have surged, even as inequality itself has not: living with far too high inequality might be accepted when most are getting richer (hello the 1980s), but amid stagnation it’s toxic. Our last chart, covering 50+ years of income growth across the distribution, should remind us not to accept this failure as inevitable. 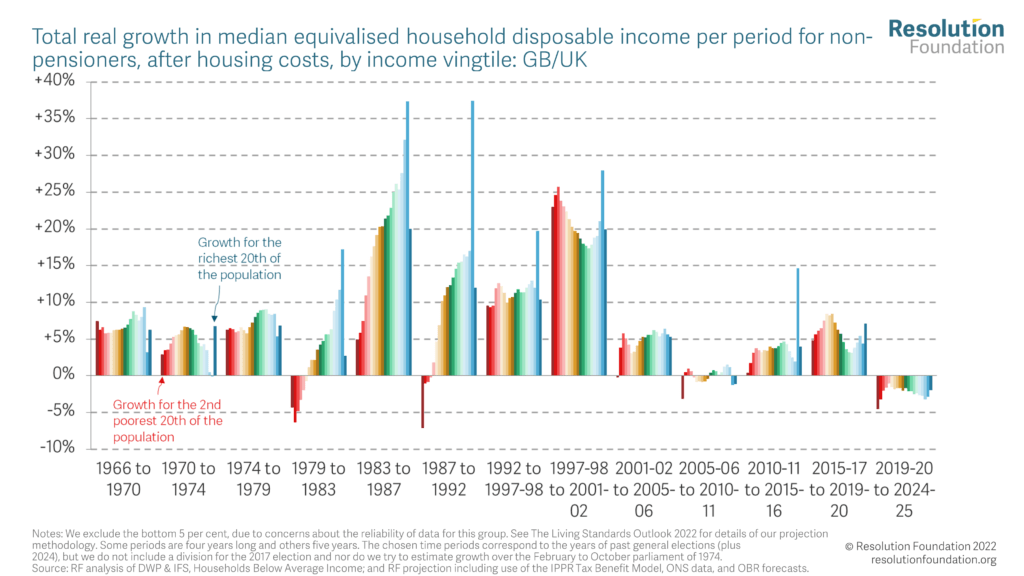 We know next year will be grim amid surging inflation, but the living standards recovery from it looks set to be weak too. Working-age incomes at the time of the next election in 2024 are projected to be 2 per cent LOWER than they were when we voted in 2019: making it the worst parliament on record. And the previous 15 years weren’t exactly great either. Forget worrying about whether we’re about to get the inflation of the 1970s, and ask yourself why we can’t aspire to the living standards improvements seen then. It’s time we once again focused seriously on getting the UK an economic strategy to raise growth and lower inequality (there’s a reason we’re doing the Economy 2030 Inquiry…). Note, talking about tax cuts, as taxes rise, isn’t one (and neither, Labour, is just promising not to be Jeremy Corbyn).

On that happy note, have a great weekend.