Hope everyone’s had a relaxing week. We have not. Budgets are generally fairly dark, sleep-deprived times in RF towers anyway, but coronavirus-infected Budgets, where loads of the numbers are out of date and don’t reflect what the Chancellor has actually announced, are the work of the devil. We’re in uncharted unchartable territory. That sleep deprivation at least means the full RF Budget analysis is ready and waiting for whenever you get quarantined.

In other news it’s been good to see the UK’s combined monetary/fiscal response being recognised abroad as pretty good, even if there’s more to do on help for individuals. It’s a nice change from being labelled a failed state. Then again, it’s not hard to manage a better response than the dogs’ dinners the US and euro-area are making of it – though a firmer German response has just been announced.

PS – If the above doesn’t put you off coming to work at RF (it shouldn’t!) then we’re hiring. Come join the team.

Age Pays. The minimum wage has always included lower rates for the young. The current rate for 18-20-year-olds sits at £6.45, compared to £8.72 for those aged 25+. But many think this is unjustified – why should an 18 or 19-year-old be paid less for an hour’s work? A recent blog from the Low Pay Commission sets out the important, but not popular, answers.  It’s mostly to protect employment for young people given they’re more likely to be excluded from the labour market, and can experience the worst ‘scarring’ from periods of joblessness. This is an important live area of policy as the government is planning to shift the age threshold for the National Living Wage down from 25 to 21, via a shift to 23 in 2021. That’s the right thing to do given the evidence we have and the excessive number of different minimum wage rates at present – but it’s not risk-free.

Citation locations. We discussed the UK’s regional concentration of overall research funding recently – the rebalancing of which is going to be a priority for newly Budget-enriched government research. But research from New Zealand suggests we might want to dig further into different fields of research to understand the dominance of particular geographies. It looks at the citations of economics articles in the top five journals by ‘ZIP code’ (postcode) of their authors. Just three ZIP codes account for HALF of all citations from 2000 to 2015; in Cambridge, MA (Harvard, NBER and bordering MIT); Chicago, IL (University of Chicago) and Palo Alto, CA (Stanford). It turns out economics research is a lot more concentrated than average around elite institutions – the same three ZIP codes account for only 12 per cent of citations in fields outside of economics.

Classy elections. Pandemics, Brexit, Megxit – a lot has happened since last December. So to remind you – there was an election. Everyone has had their say about what happened, but distance and data really help with the whole learning the right lessons thing. A big welcome then to the just-released British Election Study (BES) data. To kick off the lesson learning, the BES team have set out their take on the important question of class. There’s lots to chew over. Some you’ll be familiar with, like how Remain/Leave polarisation has sped up longer-term realignment as the Conservatives made significant gains among working class voters. Less well known is the stark strengthening of the Tories hold over self-employed voters. Oh and the authors think in our polarised electoral landscape the radical right has far more sway, which is nice. In slightly cheerier news, ‘political trust’ has had a recovery during and after the election – although in shock news your mood on this issue depends on whether you were a ‘Leaver’ or a ‘Remainer’.

#coronavirus. This trust thing is quite important anyway but is crucial pandemic-wise, so check out this new blog examining how trust in government/scientists varies across countries wrestling with COVID-19. The take on the UK: low trust in politicians, but high trust in technocrats – which helps explain why Boris is saying not so much and the Chief Medical Officer/Scientific Adviser are the front people for this crisis. Inevitably we’re all talking about coronavirus, but research by social media company Synthesio looks at what exactly we’re talking about pandemic-wise on social media. Top of our concerns is the impact on our personal finances (followed by prevention, politics and travel challenges). Fair enough given that even if you are entitled to Statutory Sick Pay (and two million low earners aren’t) it typically only covers a third of your earnings. There’s even a while book now on the economics of the virus to get you through self-isolation.

Councils taxing. An interesting new report from the Child Poverty Action Group looks at the abolition of council tax benefit in April 2013, and the localised council tax support schemes that replaced it. The results are interesting, and worrying. In 2018/19 nearly 20,000 people in London were referred to bailiffs, and over 100,000 were in arrears. This fits with previous evidence from Citizens Advice, who are seeing more people in council tax debt coming through the door. More surprisingly, six London boroughs seem to have imported the government’s two-child limit policy for national benefits into how they determine family entitlements for local council tax help. This makes a big difference and could see a family with three children losing over £50 a month. Sobering given that, as the report notes, council tax is already highly regressive.

The big story of the Budget was (rightly) the virus response. But we shouldn’t lose sight of the big shift happening to Britain’s political economy. To assist on that front COTW focuses on the last year of successive five-year official forecasts over recent years. They reveal both what the OBR thinks will happen to growth, and what the government intends to happen to the public finances. The big picture = borrowing going up (to pay for a £203 billion spending increase over the next five years) and growth coming down (because the OBR has repeatedly got much gloomier about the UK’s growth potential). The second of these points is basically being ignored, despite the OBR pencilling in growth of just 7.3 per cent over the next five years and 1.4 per cent in the final year. This is both incredibly grim, and unbelievably optimistic (it was produced pre-coronavirus). Assuming even a tiny economic hit from the virus, this is the worst growth outlook since records began. This might not matter for economics or politics today, but it will for tomorrow. If growth is really this weak, our pay rises will fall and future Budgets will face much tougher choices on public service spending than were involved in handing out all the goodies this week. 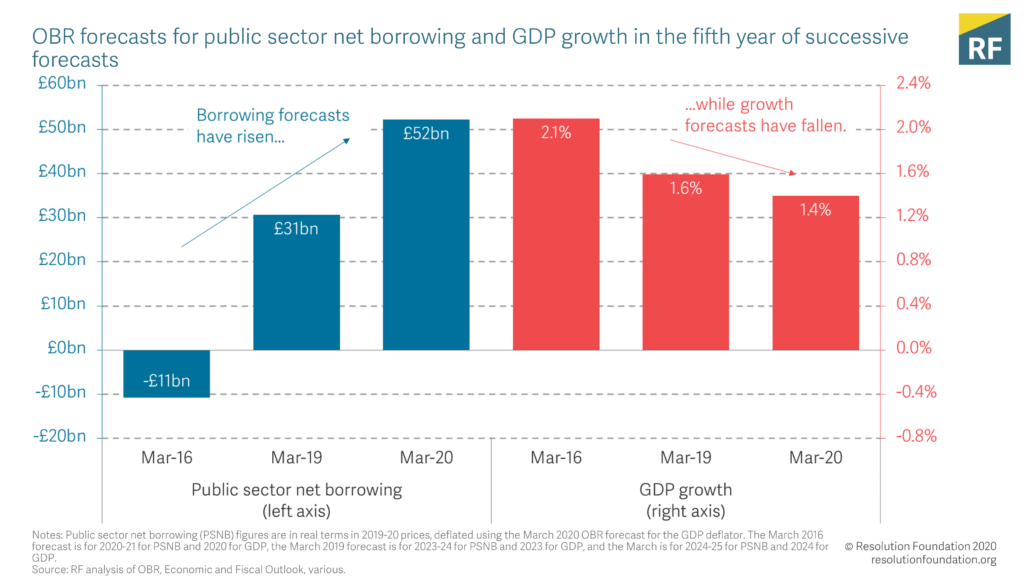