Another great week for persuading the kids that politics is a serious business. Putin’s advising the PM to drink less to reduce his weight, and (presumably?) the PM’s wishing his MPs would drink less to reduce their resignation rates. Basically, British politicians should keep their hands off other people’s bodies, and Russian leaders should do the same when it comes to other people’s countries.

The big policy news is the PM wanting to raise defence spending to 2.5 per cent of GDP (current NATO target = 2 per cent). Which neatly illustrates why modern Conservatism finds itself professing to be all about lower taxes, while raising them to the highest level in decades. We’ve funded a growing welfare state by cutting the military for over half a century. Putting that into reverse and cutting taxes will be… challenging. And that’s before you get into trade-offs with wider public spending – not just the NHS, but what it’ll take to get even remotely serious about levelling up (see this week’s chart).

Luckily, you don’t have to resolve the tensions inherent to cake and eat it politics this weekend. Instead you can back Britain (without spending squillions on tanks) by rejecting Wordle now the Yanks own it and switching to the ONS’ attempt at light entertainment below. Is it fun? Hell no, but it’s British god damn it…

Private property. What happened when countries (including a set of tax havens) agreed to share information on the ownership of financial assets with each other’s tax authorities? Billions got moved out of such assets into real estate – including in the UK – because companies registered in tax havens but owning property elsewhere weren’t covered by the new transparency rules (the Common Reporting Standard). Some proper economist sleuths at the EU Tax Observatory show that this isn’t peanuts, estimating that £16-19 billion was invested in UK property during the middle of the last decade following the CRS’ introduction. This isn’t great news given I thought the point of transparency of asset ownership was to boost UK tax revenues, not London house prices.

Population puzzles. The census is out! The first data release shows that our efforts at procreating/immigrating saw the population of England and Wales grow 6.3 per cent in the last 10 years to just under 60 million. And well done on ageing too: 18.6 per cent of us are 65+ vs 16.4 per cent ten years back. There are bigger changes at local levels – more southern areas have tended to see higher population increases than the north. Tower Hamlets and Dartford top the list. Some city centres bucked that trend (Kensington and Chelsea/Westminster had the largest falls) but that may largely reflect the shocking news that holding a Census in the middle of a pandemic affects your results…. The ONS are down with the (40 year old) kids with a new online game that lets you test your demographic knowledge. Who says statos don’t know how to have fun…

Cracking cities. Want to know more about your local economy than how many people live there? You’re in luck. Yes Zuckerberg’s Metaverse looks rubbish, but the Metroverse is top. Combining great data visualisation with the research of the Growth Lab at Harvard it’s full of cracking stats on local economies, industrial specialisations and growth opportunities in cities round the world.  In news likely to upset everyone on both sides of the Channel, London is similar to… Paris (alongside Singapore and Santiago). Meanwhile Stoke-on-Trent has more people working in care homes and hospitals than in similar cities; and has the opportunity to grow in furniture manufacturing and insurance. Enjoy – unless you’re an economic consultant currently rinsing local authorities for this kind of stuff…

Popular policies? The pandemic saw a big increase in government support across advanced economies, with the UK furlough scheme and benefit increases just our own version. But it hasn’t lastingly shifted attitudes towards benefits, despite confident predictions of a transformation. Further evidence of this comes from Germany. New research shows support for family/unemployment benefits increased slightly (by 0.5 percentage points) between January and June 2020. But it didn’t last, falling closer to pre-pandemic levels by September 2021. There’s a wider lesson here: stop thinking that a crisis will have some magic silver lining of solving whatever political/policy problem you’re focused on. Real change is a lot harder than that.

Levelling up is all the rage (well talking about it is). We’ve got TWO major Economy 2030 Inquiry reports on the topic, covering income and productivity gaps between places. Both matter, and are big and persistent. COTW shows our productivity gaps, alongside France, Germany, Italy and Spain, highlighting two challenges: UK productivity is just too low (all the blobs need shifting to the right) and our regional gaps are too high. Now stop looking at this chart and longing to be Germany – its more even spread of output reflects a goods-dominated economy (manufacturing exports get done in a much wider range of places than services, which cluster in successful cities). Instead focus on (also services-dominated) France. Yes, it has a single huge megacity just like us, but some (but by no means enough) of its smaller cities are also high productivity. There’s no reason we can’t be doing more of that, although (as our report shows) it’ll require much larger levels of investment, population growth and far bigger change for the likes of Leeds/Manchester/Birmingham than is currently being contemplated. 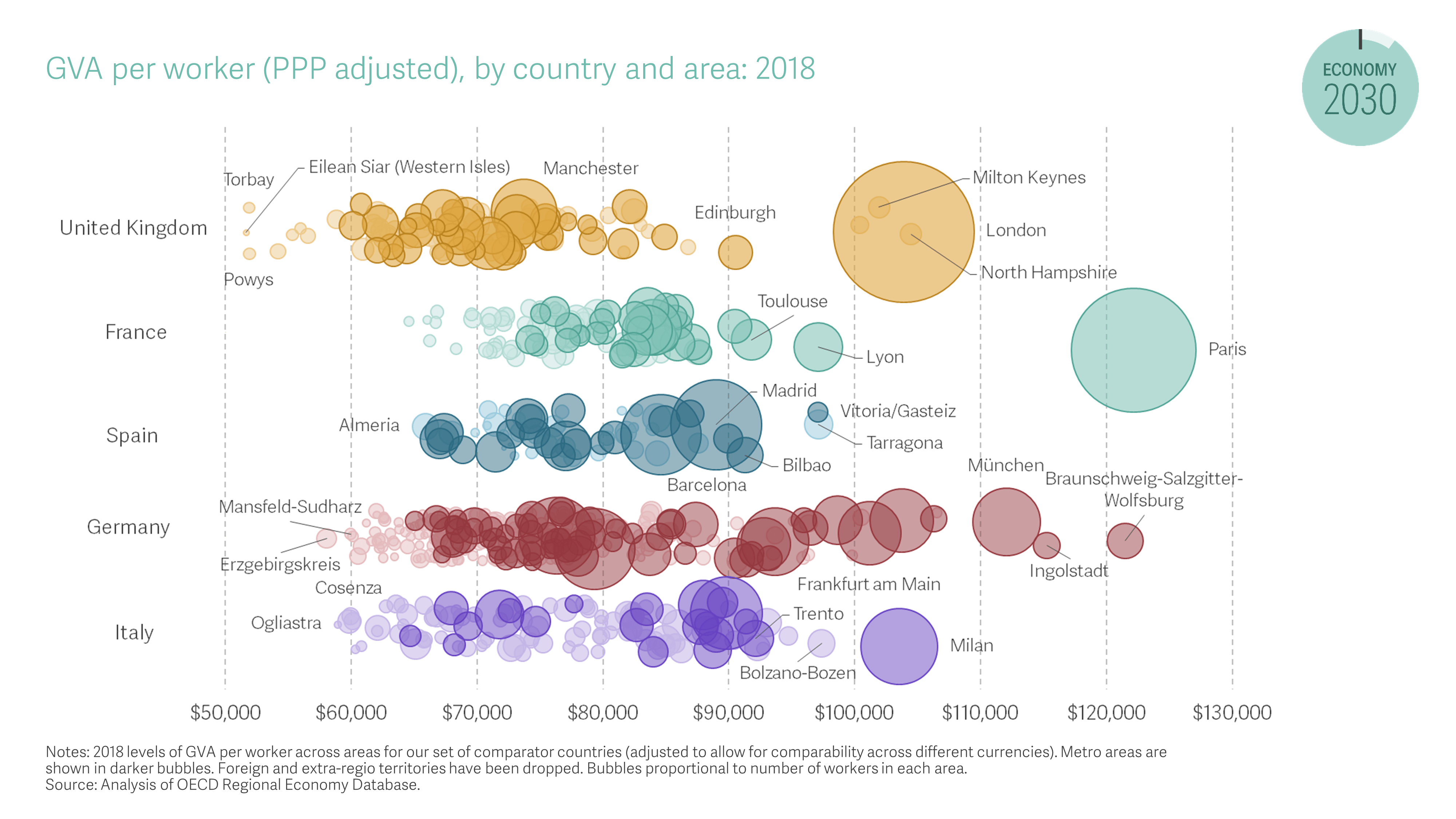