In 2018 the Trades Union Congress (TUC) celebrated its 150th birthday. Yesterday the government delivered a somewhat belated birthday present to the union movement in the form of new statistics showing that membership levels have risen significantly for the first time in almost two decades. Happy birthday TUC!

In this short blog post, we provide a bit more detail on this headline finding and drill down into other important (and frankly less cheerful gifts) to be found within the latest data. Here are five key points to take away from the statistics.

We’ve had some big falls in trade union membership levels recently, but 2018 was an exception. The latest figures show that the number of employees in union membership increased by over 100,000 last year. This is more than in any year since the turn of the century, and the second highest single year increase in the number of people in a trade union in the 23 years for which these statistics have been published. 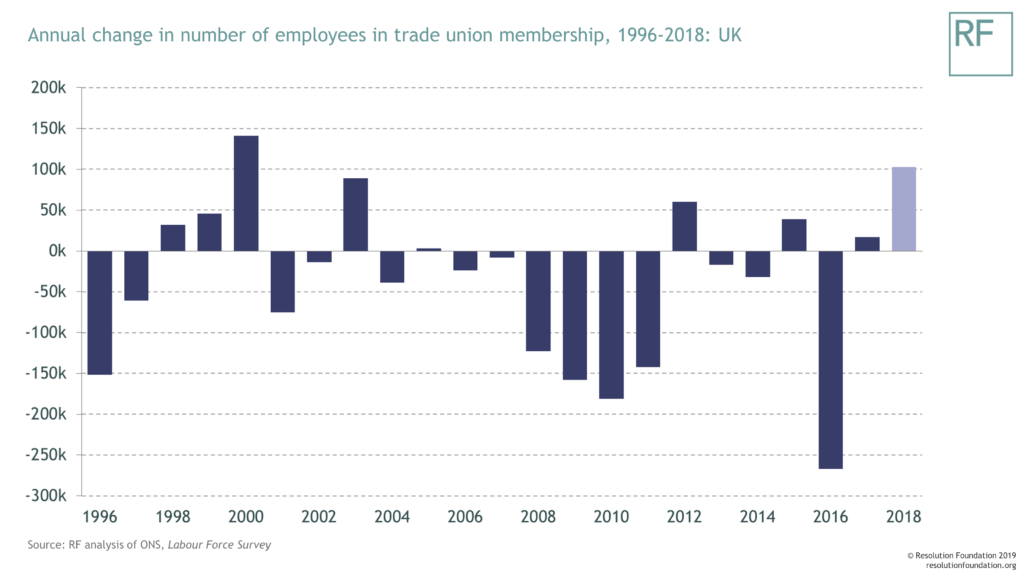 In total there are now 6.7 million people who are members of trade unions in the UK. There aren’t many organisations that can claim a membership of this size. However, the number of people in union membership is considerably lower than when unions were at their peak (there were 13 million members in 1979), and it’s over 200,000 lower than in 2010 – despite the number of people in work in the UK increasing by almost three million over that period. This dynamic of falling or flat membership amid a fast growing workforce is why it’s important to track trade union density too.

Trade union density measures the proportion of employees (or all those in employment) that are union members. It provides a better estimate of the overall strength of the labour movement in the UK than the headline number of members. 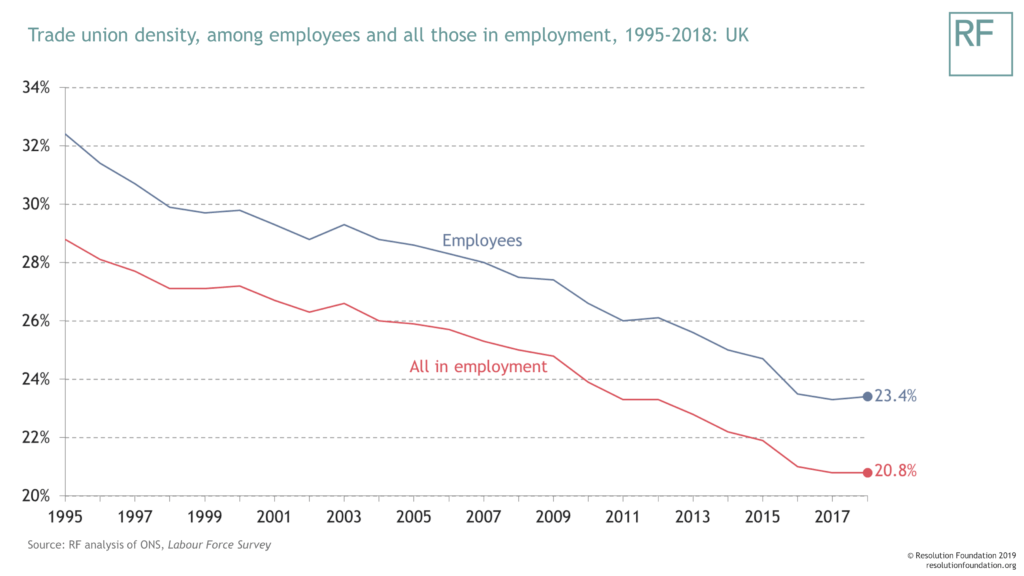 The improvement in union density over 2018 is very small and it would be a mistake to claim that falling union density is now a thing of the past in the UK. That said, this could be the first sign of things bottoming out. There’s been a growing sense in recent years from those inside the union movement that recruitment – particularly of younger workers – was something that needed to be prioritised more than ever.

This year, trade union density has continued to fall among private sector employees – from 13.5 per cent to 13.2 per cent – continuing the story of a long, slow, decline in this part of the jobs market. Membership rates among the self-employed are also down slightly, from 6.8 per cent to 6.6 per cent. The trends in these figures back to the early 2000s are shown in the chart below. 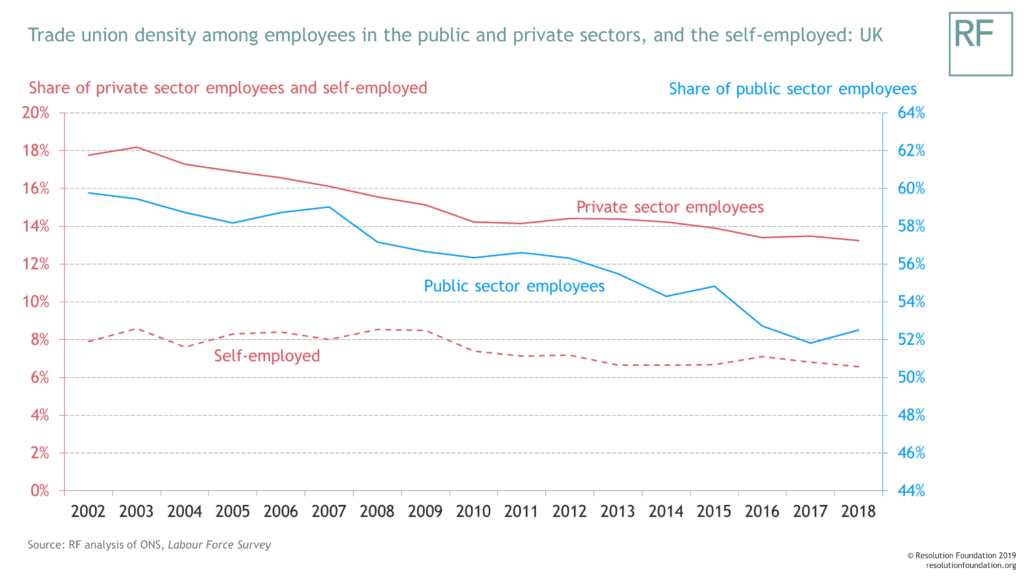 We can’t explain what’s happened among those working in public administration at this stage, though of course part of the story is that this corner of the jobs market has grown substantially as the civil service has expanded in the wake of the 2016 EU referendum. In general, it’s important not to get too hung up on the specific changes that take place within different industries from year to year – these numbers can fluctuate substantially and the long-run trend is more worthy of our attention.

The difference in the rate of membership between the public and private sectors is large, but the inequality in workplace representation is larger still when membership at different points in the earnings distribution are considered. 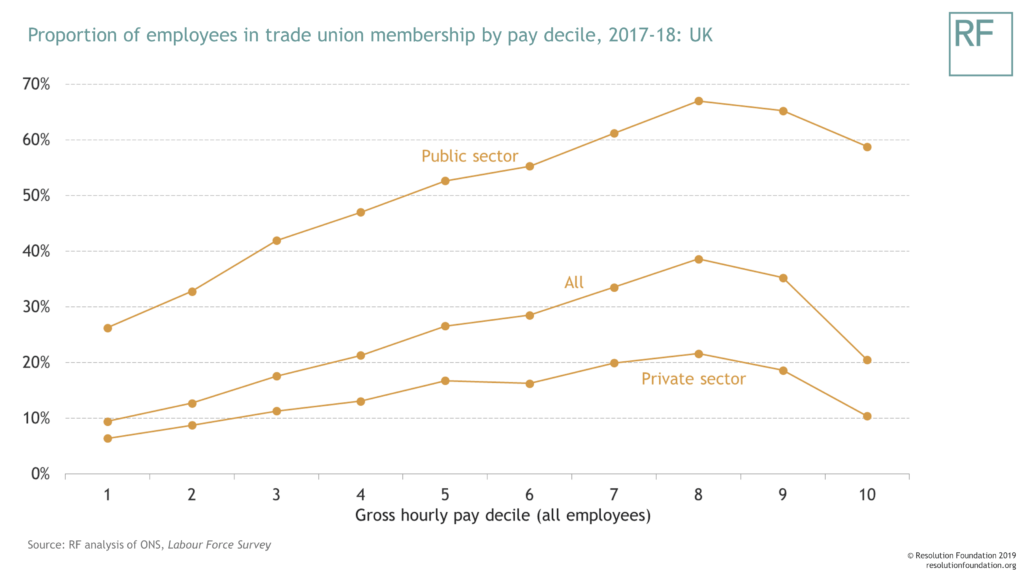 The big picture story hiding behind the long-run fall in membership is that each new cohort of workers starting out in the labour market are less likely to be union members than their predecessors. This presents a problem for membership rates in the long run because older cohorts (e.g. those born in the 1950s) who started out in the labour market when union membership was at its peak (in the 1970s) are now at or nearing retirement.

As these cohorts, for example the 1951-1955 cohort shown in red on the chart below, leave the labour market and new cohorts (e.g. the 1991-1995 cohort shown by the gold line below) enter work, the mechanics of demographic change mean that the rate of union membership will continue to fall. 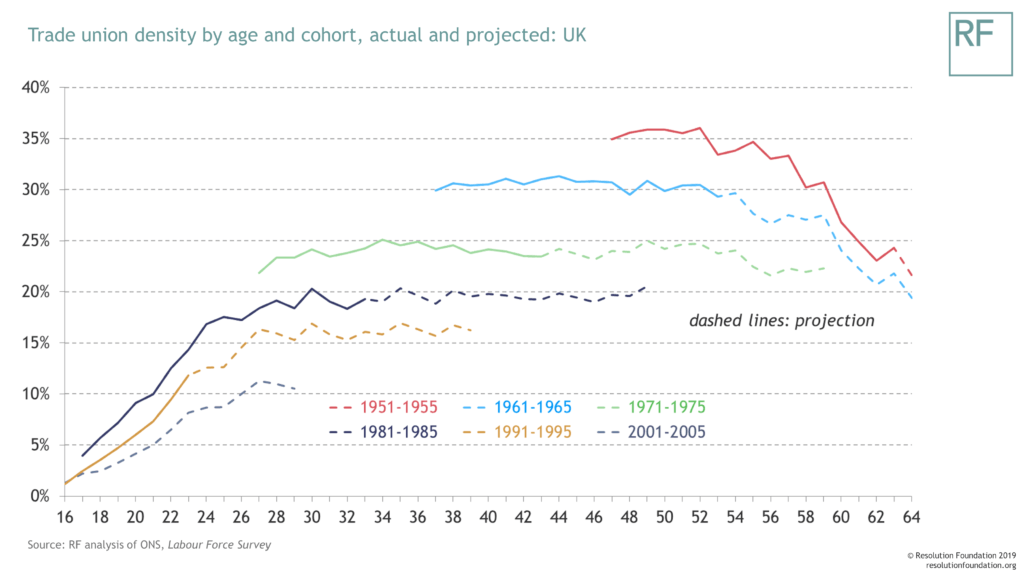 This matters. Trade unions are the primary way in which workers have historically – and still do – exercise their power in the workplace. Winning rights, improving conditions and getting a better deal in terms of pay and hours are all things that have been won for workers with the help, and leadership, of trade unions. The prospects for the exercise of worker power continuing in the years ahead are much diminished if membership rates fall in line with our projections.

Whether it be a revival in trade unionism or new institutions offering new ways of enhancing the position of workers – it seems increasingly likely that the UK needs a re-set of worker power in the years ahead, this is something we at the Resolution Foundation will be looking in more detail at in the months to come.