Donald Trump is back on the golf course, the US is signing up to Paris, and the QAnon loons have realised something is up. Nature is healing, albeit after the political equivalent of a nuclear winter.

Here the currently peaking daily death rates are a sobering reminder of our failure to lockdown pre-Christmas. But better times lie ahead with vaccination and infection rates respectively rising and falling faster than many expected. The key is that we now carefully release restrictions and only gradually phase out economic support, as vaccines enlarge the budget for social interactions we can afford without R rising above 1. Central to this happening is Downing Street finding that crucial device, a learning curve. And you know what helps with learning, as I tell my kids daily during home schooling (or parental failing as it’s more accurately known)? Reading, which is what TOTCs is all about.

So, have a good weekend steepening your learning curves with the reads below.

Great leveller? The ‘catastrophic moral failure’ of very uneven vaccine access means we have a new global health inequality. But what about economic global inequality? Economist Angus Deaton (currently leading the IFS’s Deaton Review of Inequalities) recently published his answer. While we might have expected poorer countries to fare worse during the pandemic, richer countries have experienced more deaths and larger falls in income (health vs wealth trade-off misses the entire point). This means that if we compare country by country, income inequality has actually decreased. When you weight by population, income inequality between countries has increased, but this isn’t about the West doing well. Instead it reflects China (no longer a poor country) managing a low death rate and decent economic growth – leaving poorer countries behind. This tells you something else about the evolution of our global economy post-pandemic – the big force driving falls in income inequality between countries in recent decades (the rise of China) won’t be having that same effect in the years ahead.

Minimum debate. There’s now a significant debate across the Atlantic about Biden’s $15 minimum wage plans, and those of us arguing for higher minimums should pay attention to those disagreeing. A new blog offers a nuanced version of the case against, with two key points. First, focusing exclusively on whether higher wages costs jobs misses a lot – because the nature of the employee/employer bargain is more complicated. How hard people are expected to work and wider employee benefits also matter. It’s true that our increases in the minimum wage have seen reductions in other parts of employees’ compensation (like bonuses). Second, the author rightly notes that not all workers are the same, worrying that minimum wages force firms to be more ‘picky’ about who they hire to the detriment of the disabled or young. On this there isn’t much evidence of large effects – but we should keep looking. More generally, these minimum wage debates need to widen from finding limited job impacts to asking why the (expected) effects haven’t been found. That’s the argument from a great new paper from Alan Manning, who concludes the fundamental reason is that labour markets operate a lot less like economists’ ideal of perfect competition than other markets – it’s a lot more hassle changing your job than changing your broadband provider, and the latter is hard enough…

The name’s bond, war bonds. This morning saw the deeply unsurprising news that UK debt continues to rise (pandemics are expensive, who knew?). So this piece from Norma Cohen, published by the Bank of England, feels particularly timely, looking at how the British state raised huge funds during World War One. Today the Bank itself is the biggest customer for government debt, but back then big business was the main source of funds. Some good old fashioned financial repression saw banks and insurers bullied into lending to the state. Examining who lent also gives a great insight into wealth inequality in early 20th Century Britain. War bonds weren’t bought by those on low incomes ‘doing their bit’, but overwhelmingly by the already-wealthy in industry, with just 3 per cent of investors in a November 1914 auction providing 40 per cent of the capital. Post-war inequality fell (as it usually does) and there’s some more diversity of investors with women outnumbering male retails investors by 1932. History lessons are always useful – especially for a country raising shed loads of cash.

Answer the question. Politicians are good at answering questions they want to answer, not what they’re asked (unless the question’s ‘Is Joe Biden woke?’). That’s a problem for journalists after incriminating answers, but also academics searching for more mundane information. So, Philip Cowley has put together his wonderful how to guide for would-be interviewers. Instructions include ‘look interested, but never too excited’, and ‘a little bit of flattery goes a long way’. Even if you’re not planning a PhD it’s worth a read for the brilliant anecdotes. For those of you more interested in answering questions than asking them, it’s also worth a look at the University of Cambridge’s ‘Bennett Prospect Public Policy Prize’, offering £10,000 for the best answer to the question: ‘Is it possible to govern well in the age of populism?’. Let’s hope the winning answer is yes.

Climate Investment change. In shock news for a certain American politician, the Paris Agreement on climate change does actually apply outside of France. However, the Banque de France has recently published a paper looking at how laws adopted following the agreement affected the choices of French investment firms. Uniquely in Europe, France required insurers, pension funds etc. to report annually on their exposure to climate risks. Comparing firms within France to French firms based abroad (not subject to the legislation), the research finds that affected firms chose to reduce their investment in fossil fuel companies by 40 per cent. Which is quite a bit.

There’s a big row on about whether the government keeps the £20 a week uplift to Universal Credit beyond March. The short and obvious answer is they should, which is where I reckon they’ll end up. Some argue that not extending the uplift isn’t a big deal, simply returning benefits to their “normal” pre-pandemic level. But there is nothing ‘normal’ about recent pre-pandemic benefit levels, or the impact this has had poorer households incomes – as new ONS data published yesterday made clear. In the years running up to the pandemic, the incomes of the poorest fifth of households were falling year-on-year. This isn’t meant to happen outside of recessions, and took place because benefit cuts delivered a policy-driven living standards disaster for low income Britain – who entered the pandemic with no real income growth since 2004-05. And poorer working-age households have actually seen their incomes fall by 8 to 10 per cent, as chart of the week shows. So the decision about the future of the £20 will shape the future of our living standards (see out new Living Standards Outlook), but it needs to be informed by our awful recent past. 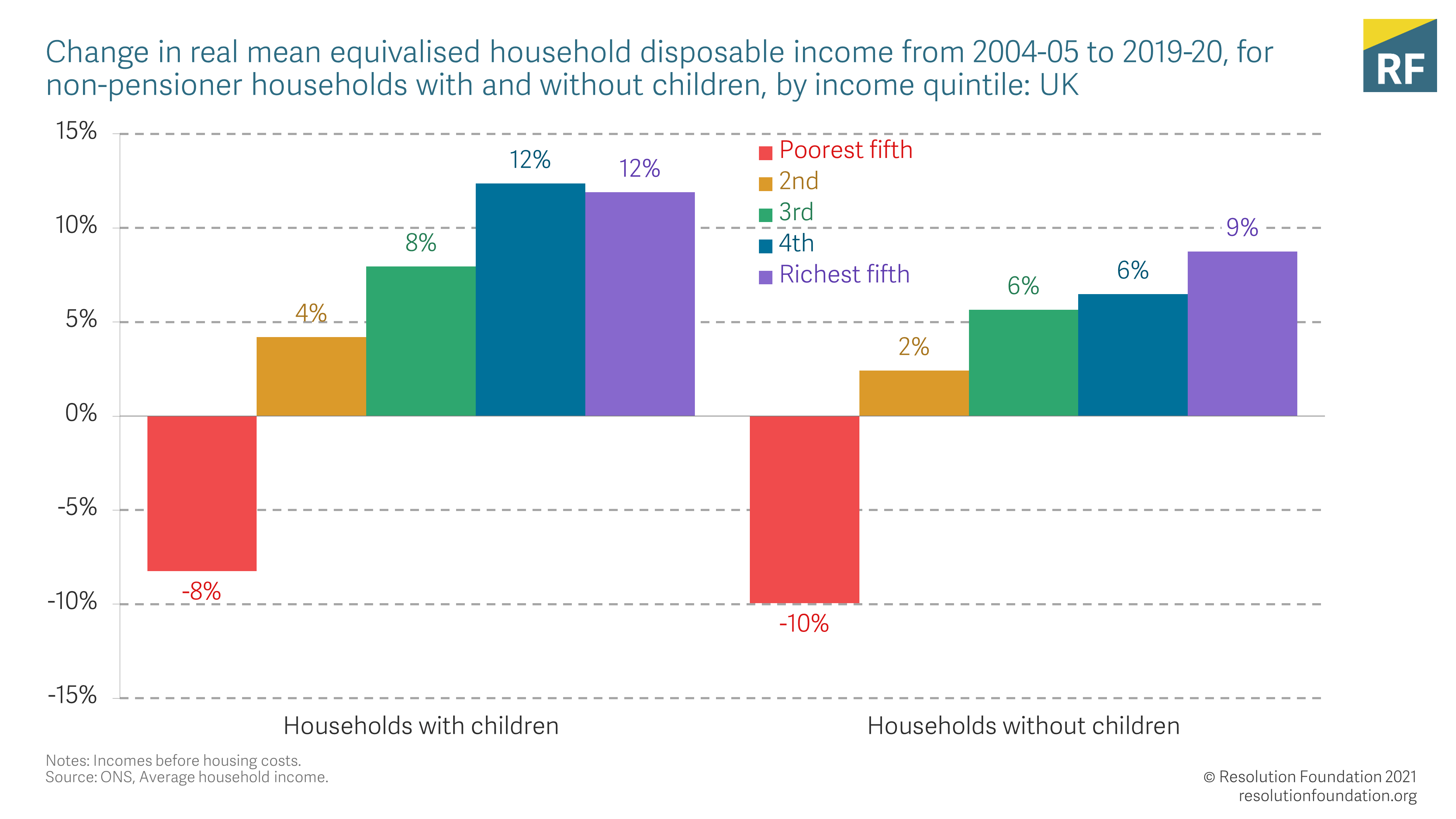