Boris Johnson has decided it’s Holly Willoughby and Phillip Schofield yes, Andrew Neil no. Apparently this is the punters’ fault for not liking tough interviews any more – so shame on all of us, and definitely not on the PM for running scared.

In more positive news, the whole thing is nearly over. It’s a relief for the punters and politicians too. Once past polling day they can get back on the Justin Trudeau bandwagon and start saying what they really think about voters, and their leaders.

So enjoy the weekend and doing your democratic duty* on Thursday. And if you don’t get the result you want, remember the words of that great sage Katy Perry – “just because it’s over doesn’t mean it’s really over”. This democracy thing goes on and on and on.

*if you’re still making your mind up, we’re here to help with reams of analysis to help you cut through the election noise – check out our Election 2019 page.

Inequality Atlas. Prepare yourself for a geographic extravaganza courtesy of the release of Alasdair Rae’s fantastic ‘English Atlas of inequality’. Building on Charles Booth’s (one of the first social scientists) famous map of poverty in London, the project explores inequality at the level of places within which we actually live and work – rather than the usual national approach. There are some important conclusions for national policy makers – some of the poorest areas are also the most equal, and bad outcomes are more associated with places that keep their rich and poor segregated, rather than those areas that just have the biggest income gaps. But it should also be a crucial resource for local leaders, helping them identify more specifically the nature of the inequality challenges they face. To understand why, look up your local area inequality map on the website. To reinforce what a data-driven triumph this is you can also check out Alasdair’s FT video.

Wealth booms. Big long-term trends change a country, often without anyone noticing. Britain’s wealth boom is a prime example. Almost absent from this election, it’s a pretty huge deal. A £14.6 trillion deal in fact, according to new ONS data published yesterday. While UK incomes have stagnated, wealth has boomed – rising by 13 per cent over the two years to 2016-18. But not everyone is sharing in this bonanza. The wealthiest 10 per cent of households (whose average wealth is £2.5 million) own 45 per cent of all household wealth – more than the bottom 80 per cent combined. With wealth being unequal (despite the big wealth inequality falls of the 20th Century), the fact that its grown so much means big wealth gaps between households, places and cohorts. The result is that you can’t earn and save your way to being truly wealthy in 21st Century Britain – you need to inherit or marry it. Not a great look…

Electoral busts. Next week we’ve got an election with big economic choices on the table – so how might financial markets react to a Conservative or Labour win? New research (free version) examines a whole heap of worldwide post-1945 elections to see what markets do after a left or right wing victory. The good news for Labour, despite all the warning that UK borrowing costs might soar, is that rates on government bonds don’t tend to change much when leftists win. The less good news? The stock market and currency do take a pounding – large stock market crashes followed close victories for the left in France in 1981 and Chile in 1970. Now, maybe John McDonnell’s happy with stock market falls if they reflect an expectation that he’ll benefit workers at the expense of shareholders. He may also note that stock market movements don’t always do a great job of telling us about the underlying economics. After all, they gave us the ‘Trump Boom’ on the back of a short term cash injection, but ignored the bigger long-term impact of the President’s one man attempt to destabilise the global economic order…

Disputing trade. …which brings us to the glamorous subject of the World Trade Organisation and its system for resolving trade disputes – a system that Donald Trump may well succeed in shutting down next week, as this short update explains (more on the ever-excellent Trade Talks podcast). This might seem a small issue – but it’s not for at least two reasons. Parochially, of course, Brexit means we may be more reliant on the WTO for defining and adjudicating our trading relationships in future – as Ed Conway notes today. But more generally we’ll be dealing with our Brexit uncertainty-related economic challenges against the backdrop of weaker global growth (currently hovering around a historically grim 3 per cent), as demonstrated by troubling German industrial production figures this morning. In any normal election that, and the rising global trade tensions that are one contributor to it, would be centre stage.

Quality promises. It appears that Boris Johnson may have a learning curve. The Conservative Party goes into next week’s election with a slim manifesto policy list – Brexit will be done and we’re not going back to austerity. That’s kind of it. But ‘less is more’ could be the conclusion to take away from a new stock take of how many of the Conservative party’s 2017 manifesto commitments have been fulfilled. It turns out they’ve met most of their 2017 promises. Just not the ones anyone cared about. Out of 257 separate promises, 175 (69 per cent) have been partially or fully fulfilled. Updating the law on selling pets – tick. But the promises to leave the EU and reduce migration (which evidence shows is what people cared about)? Not so much. The big lesson: quality over quantity.

This week’s chart focuses on an issue we’ve touched on before – age and politics. It’s so great we thought you’d forgive us the repetition. The UK is ‘demographically diverging’ – the oldest places in the country are ageing fastest, while many of the youngest places are getting younger. But how does this play out in elections when the youth increasingly vote Labour and the less youthful prefer the Tories? It means that 91 of the UK’s 100 youngest constituencies voted Labour in 2017, while 86 of the 100 oldest constituencies voted Conservative. Obviously, this will change after 12 December. But the trend is here to stay. In the longer term there’s an opportunity for a party to win big by breaking out of their narrow age based support with a cross-generational appeal to voters. But today is not that day, as Tolkien told us and our latest election analysis confirms… 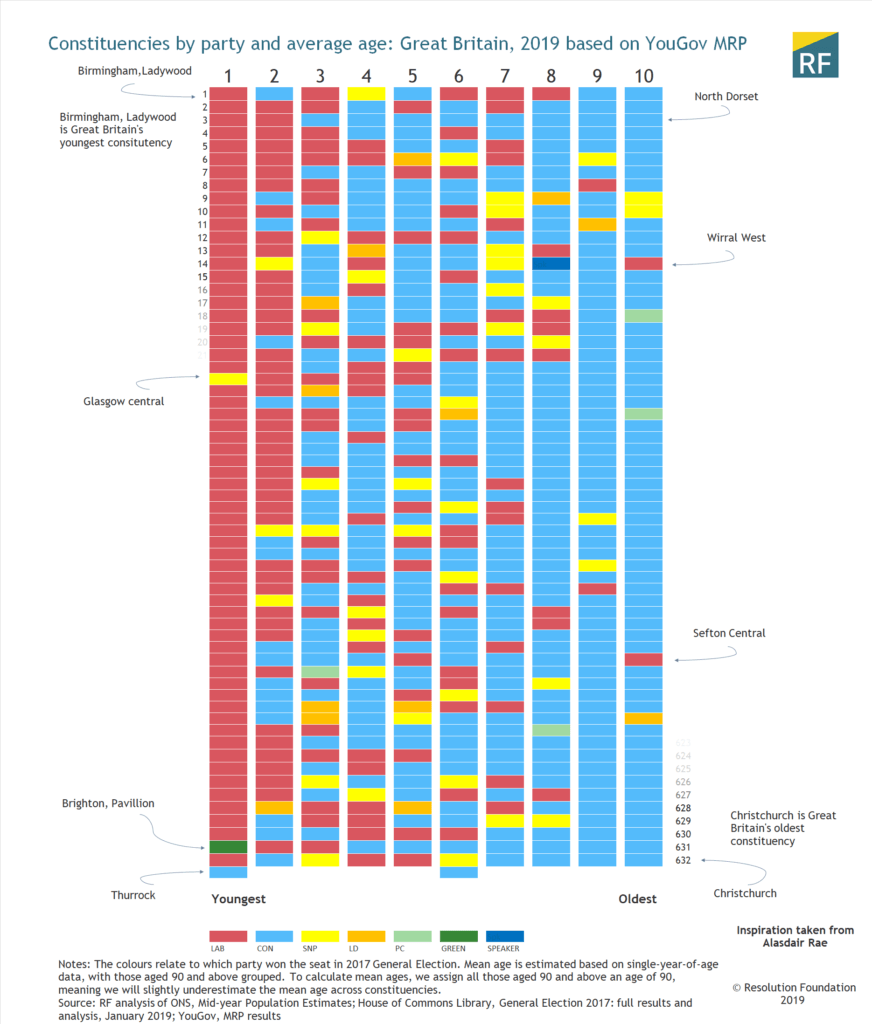