Sign up for our weekly Top of the Charts email here

It’s been a brutal week in Britain – whether you’re trying to commute in near 40 degree heat, or trying to keep your job at the Cabinet table. But I’ve got zero sympathy for the whinging – you want to try spending today driving the kids 12 hours to the Alps… it’s carnage in here. The little ones are in lockdown in the back seats but are roughly as happy about it as Amber Rudd is in her self-imposed hostage situation.

With a new set of Ministers joining her to run an election campaign our country, Top of the Charts is doing its patriotic duty this week. We are defying the gloomsters and are here to help everyone brush up on their briefs. So, Theresa (no, not you), the Saj, Amber, Andrea and Gavin, these papers are for you!

Assuming we survive today, Top of the Charts and I will be kicking back and taking a break for the next two weeks. But fear not – we’ll be back in mid-August. Happy heatwave.

Climate emergency.  Alarming news for our new environment secretary – new research (summarised here) shows that the pace and scale of current global warming exceeds any similar event in the past 2,000 years. One of the papers (there’s three) provides exceptionally detailed records to compare past climate changes with the 20th century version across different regions of the world. Their conclusion: “we find that the warmest period of the past two millennia occurred during the 20th century for more than 98 per cent of the globe”. This means that global warming is truly global. Arguments that we’ve been here before with similarly dramatic falls and rises in global temperatures, which in the past were mainly a result of volcanic eruptions, are misplaced. Perhaps limiting solving this to the environment secretary alone is a tad unfair…

Readying the Treasury for action. We are on the cusp of some very important changes that will determine how we think about the macro economy. One standout read – “Evolution or Revolution?” by Larry Summers and Oliver Blanchard – describes the mounting pressure to rethink macroeconomic, and particularly fiscal, policy. Why should fiscal policy play a bigger role in the future than it has done in the past? Because, say the authors, monetary policy alone cannot adequately control your average recession. This is something we’ll be discussing through our new Macroeconomic Policy Unit in the Autumn. You can get a taster with our impact of recessions paper here.

Doing the Business. Andrea Leadsom is set to inherit one of the last acts of Chancellor Hammond: a review of the minimum wage with a view to using it to end low pay, drawing on international experience. She can get a head start with this paper, which presents compelling evidence on the introduction of the German minimum wage. It includes the usual evidence that a wage floor didn’t lead to employment falls, but more interestingly finds that it did influence worker moves. Those on the minimum wage were more likely to move from a small, low paying firm to a bigger, better paying firm. Using a different analytical approach the paper also shows a very clear movement of employment from low-wage to high wage firms. So a minimum wage doesn’t just affect who gets paid what, but who works where, and specifically helps to reallocate workers from low-wage / low-productivity firms to higher wage / more productive firms. Worth a ponder as low productivity Britain considers where next for our minimum wage. See here for RF’s take.

More job hopping. While staying in the same job may be considered a triumph for the Work and Pensions Secretary, our current low job mobility is less positive for the wider economy – it stunts people’s pay progression and weakens productivity growth (see above), as we’ve previously shown. But what lies behind British workers’ reluctance to ditch their employers? An interesting speech by Bank of England Chief Economist Andy Haldane is worth a read for any new minister seeking an overview of our high employment/low pay economy – but it also seeks to get under the bonnet of this mobility question. His main takeaway is that “post-crisis risk aversion, and changes in the nature of work, may have increased insecurities and dimmed workers’ appetite for a vertiginous career climb”. Basically, we’ve all been scared by the last decade into staying put. Maybe Boris’s perk up the nation strategy is just what the labour market needs.

Educating the forgotten majority. This week the Commons’ Education Committee’s report warned that the education system risks “reaching breaking point”, which isn’t massively encouraging for the new Education Secretary. They rightly highlight the longstanding difference in funding between academic and vocational further education funding – which is what politics does with our cultural snobbery. But maybe things are changing. As part of the recent Augar Review, the Centre for Vocational Education provided evidence on the changing aspirations and outcomes in post-16 education. They show that yes, young people’s educational aspirations are focused on academic routes for 16-18 year olds. But they also show increased interest in apprenticeships and higher rates of progression from lower level vocational qualifications. So some good news given Gavin Williamson’s main job is going to be implementing the new T-Levels. Earlier this year we took stock of Britain’s educational attainment – and called for a reboot of stalled progress.

Chart of the Week
Amid the fun of the Cabinet reshuffle, we also got a sense of what Prime Minister Johnson’s spending priorities might be. It’s clear that austerity is over – and in some cases is starting to be reversed. The good news for Boris, as I wrote earlier this week, is that there is money to spend. The deficit is down to just 1.1 per cent of GDP – its lowest level in 17 years. But while juicy spending promises on schools, bobbies on the beat and tax cuts play well on the doorstep (you know, just in case in a General Election falls from the sky), governments also have to respond to less glamorous, but no less important, areas of need – such as the dire state of our prisons, as this week’s chart shows. Yes, there is money to spend, but it will need to be prioritised. 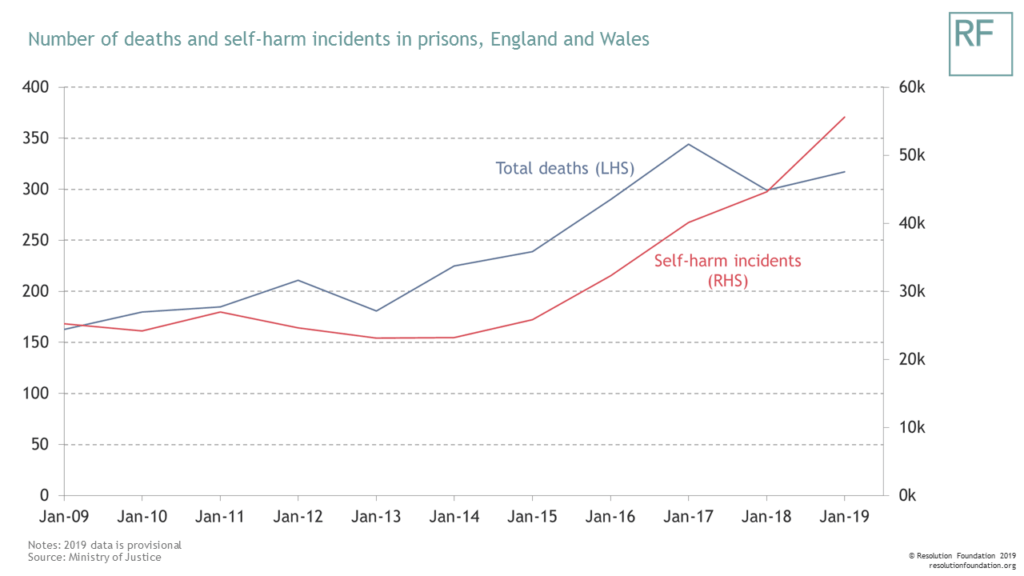