2019 – a good year for jobs and pay, defying the growth slowdown

2019 was a good year for the UK’s labour market, with the country set to enter the new decade with not only record employment but, after a decade long squeeze, record pay. The six-year jobs boom came to an end, but record employment levels were maintained throughout the year. This has helped deliver the first robust pay growth since the financial crisis, with nominal pay growth hitting a 12-year high of 3.9 per cent over the summer. 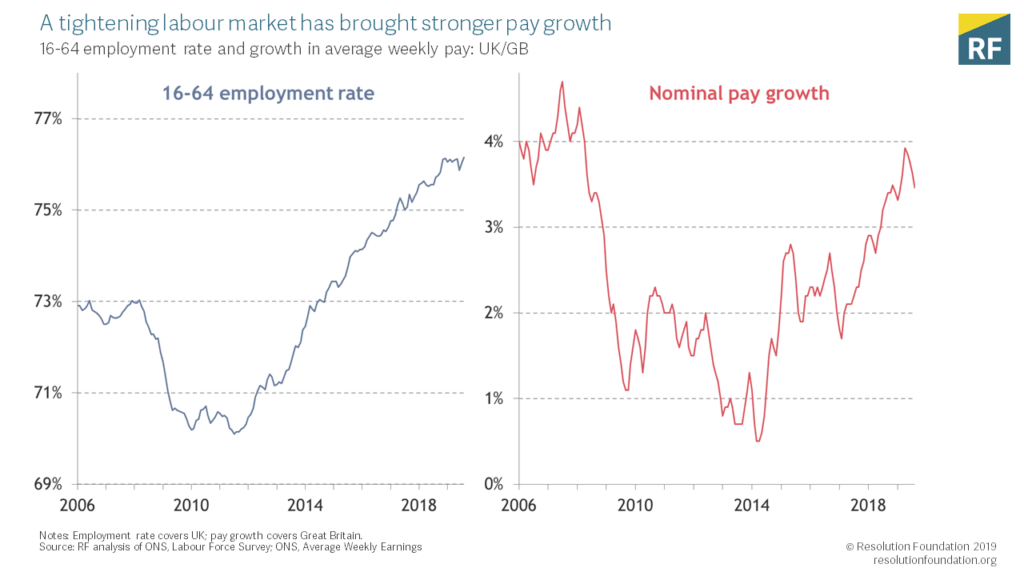 This is even more remarkable when set against the backdrop of an economic slowdown. As the labour market went from strength to strength, economic growth turned from moderate, to sluggish, to zero in the three months to October. GDP growth across 2019 as a whole is set to come in at 1 per cent – the slowest growth outside of recessions since World War Two. Brexit and the lack of any growth in business investment over the past three years is a key factor, but crucially global growth has also slowed, as the chart below shows. 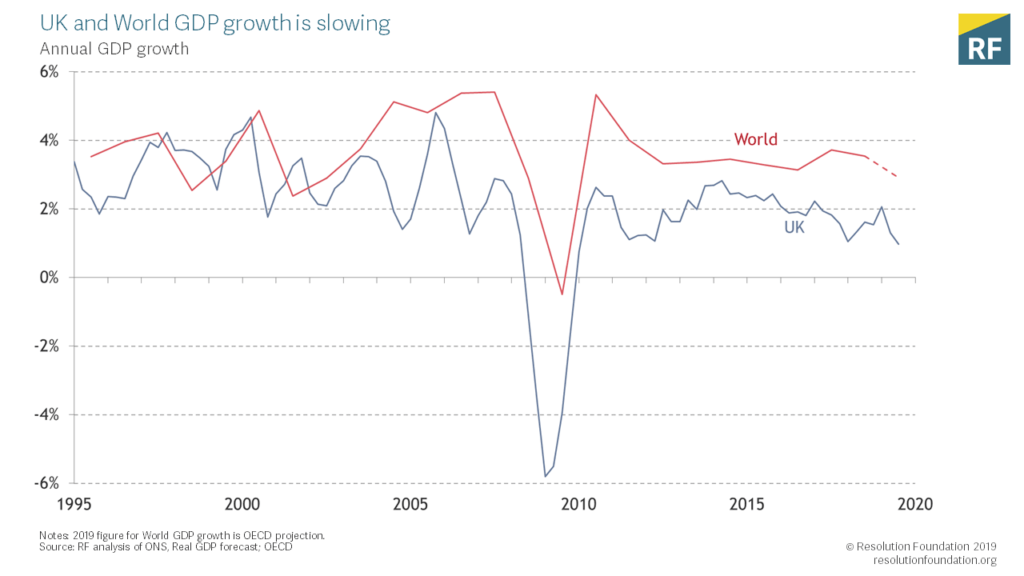 This disconnect is unusual. Employment tends to move in line with GDP growth, with the labour market lagging the overall economy by around a year. But since 2014 divergence has set in – employment has continued to rise while GDP growth has slowed, as the chart below shows. 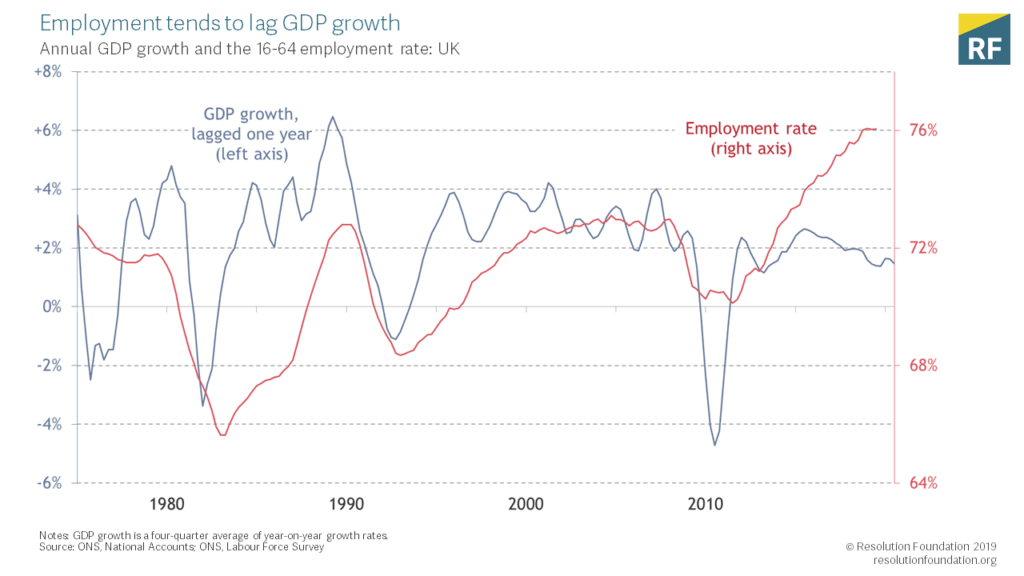 Given that the labour market is the economy as most people experience it, the big question for 2020 is whether it can continue its strong run, or whether it will reach a tipping point and reconnect with weaker growth performance.

A lesson from history

What does history tell us might be in store for the labour market? In short, it tells us that next year might well represent a turning point. Weak GDP growth tends to be followed by a year of falling employment. We can explore this with a basic statistical model (a two-quarter vector autoregressive model that accounts for GDP growth, the employment rate, real pay growth, vacancies, the exchange rate, and the output gap). This suggests that annual GDP growth remaining at 2019 rates (something we should be aiming to significantly exceed) is consistent with both the employment rate and the rate of pay growth falling, as the chart below shows. The exact magnitude of any change the model implies should be treated with caution, but the direction of travel is clear. 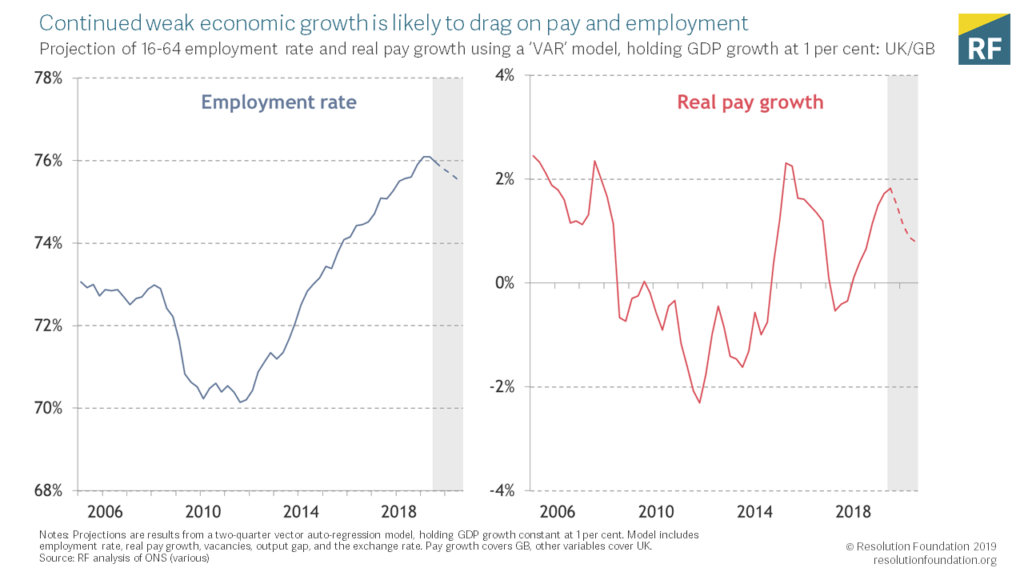 History lessons are important, but so too is looking at what is actually happening in the labour market – after all the most recent data shows the UK reaching a new employment record in October 2019 of 76.2 per cent.

That employment record has more to do with roundings than strong employment growth. Having entered 2019 with an employment rate of 76.106 per cent, it inched up to 76.153 per cent in October – the story of 2019 is flat (but very high) employment. And looking under the record employment headline reveals several warning signs for 2020.

Business surveys are now very clear that the strong wish to hire more workers that dominated the middle part of this decade is over. Employment intentions within both the Bank of England Agents and Recruitment & Employment Confederation’s surveys turned negative over the course of 2019.  While the number of job vacancies advertised remains high (in part because it’s very easy to advertise on the web these days), this measure has now been falling in each of the last ten months. 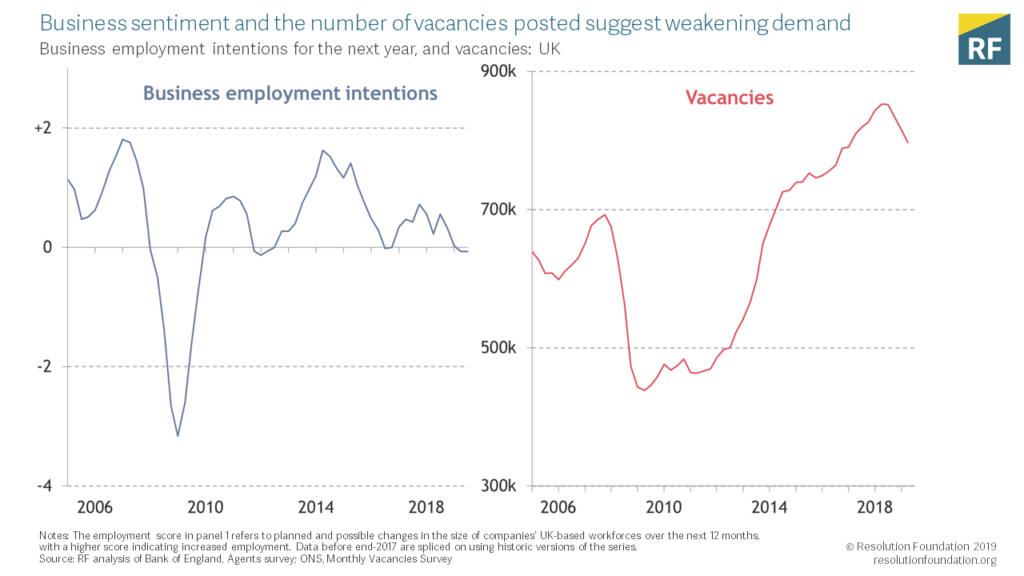 There is no sign of rising redundancies, but workers appear to have got wind of the shift in firms’ intentions. More than twice as many people expect unemployment to rise next year as did so back in 2017, as the chart below shows. 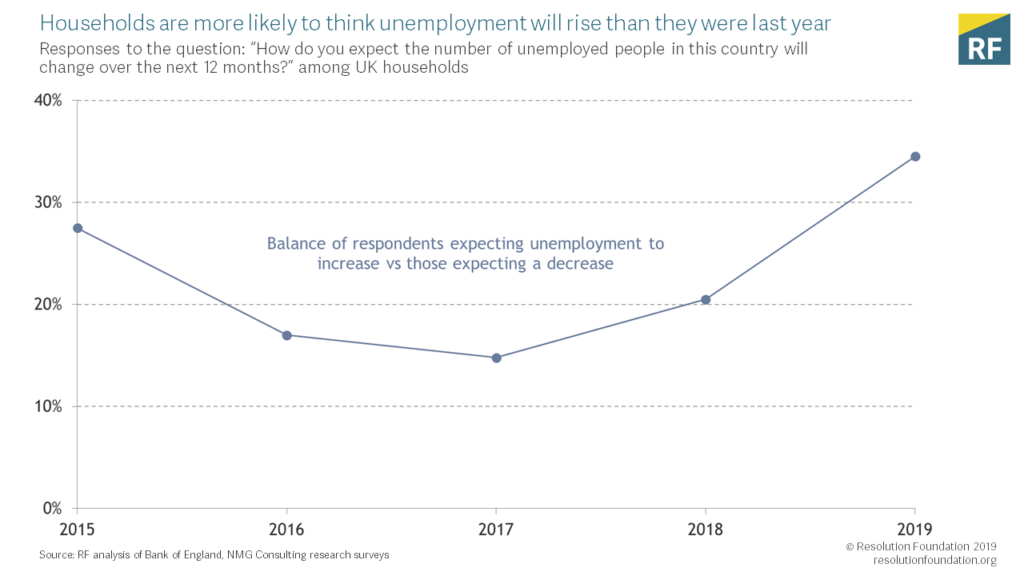 Leaving aside intentions and fears, are there any signs in the employment data itself? One group that has particularly volatile employment, and tends to suffer most in a softening labour market, is young people. Employment among 18-24 year olds has been falling since 2017. We can see similar trends in unemployment, which is arguably a cleaner indicator since it is less affected by changing educational participation. As the chart below shows, the 18-24 year old unemployment rate has increased in recent months, whereas annual changes had previously tracked the overall unemployment rate. 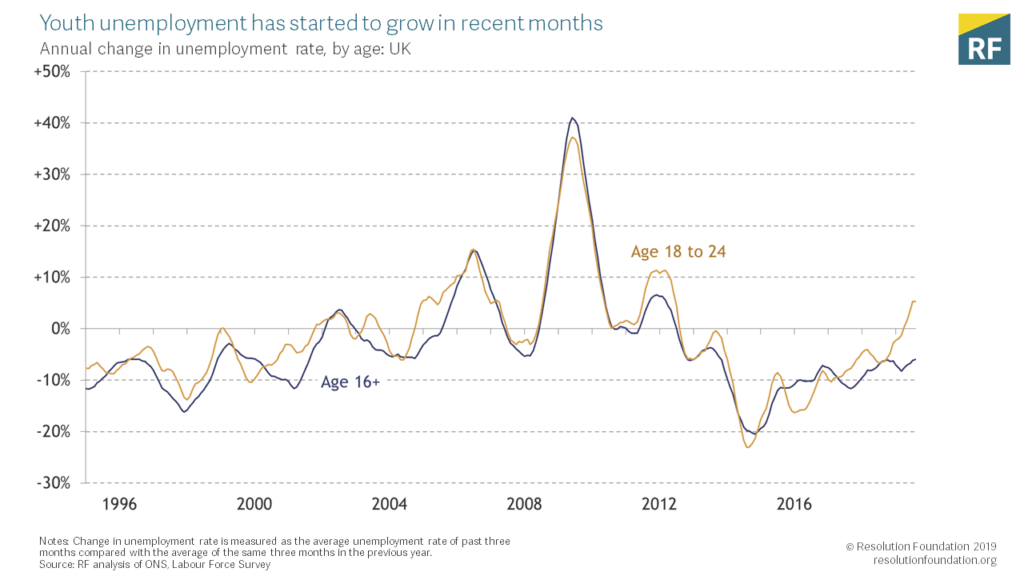 None of the above is conclusive on what we might expect in 2020. But what is clear is that the jobs boom of the 2010s is now over. Whether it will partially go into reverse remains to be seen, but weak growth, history, and nervous firms all give cause for concern. We should certainly not be taking record employment for granted.

We’ve got used to hitting new employment records every few months, but that is certainly not the case on pay. Outside of recessions the country used to hit record pay every month (i.e. pay growth existed). Instead, data published at the start of 2020 will be the first to show a record level of pay since 2008.

This is very welcome, but again there are reasons to avoid complacency. First, nominal earnings growth has eased back from the near 4 per cent summer peak to 3.5 per cent most recently. Second, that pay growth is currently significantly outstripping productivity growth – and in the end productivity increases are the drivers of rising earnings. Productivity growth has been around zero or negative for the past five quarters, and has averaged just 0.3 per cent since 2008 – a figure so bad it won statistic of the decade.  Of course, weak productivity growth does not make slower pay growth next year inevitable.  While labour costs and productivity do move broadly in line with each other over the longer term, they do not have to do so month-to-month, or even year-to-year. Power between workers and firms matters too, for example.

A simplistic look at headline pay (red line below) and productivity (blue line below) measures suggests there is space for a period of pay catch-up. But if you measure them on a like-for-like basis (the dotted red line) using the GPD deflator (i.e. relative to the price of goods and services we produce) then it’s clear that pay and productivity have moved broadly in line. 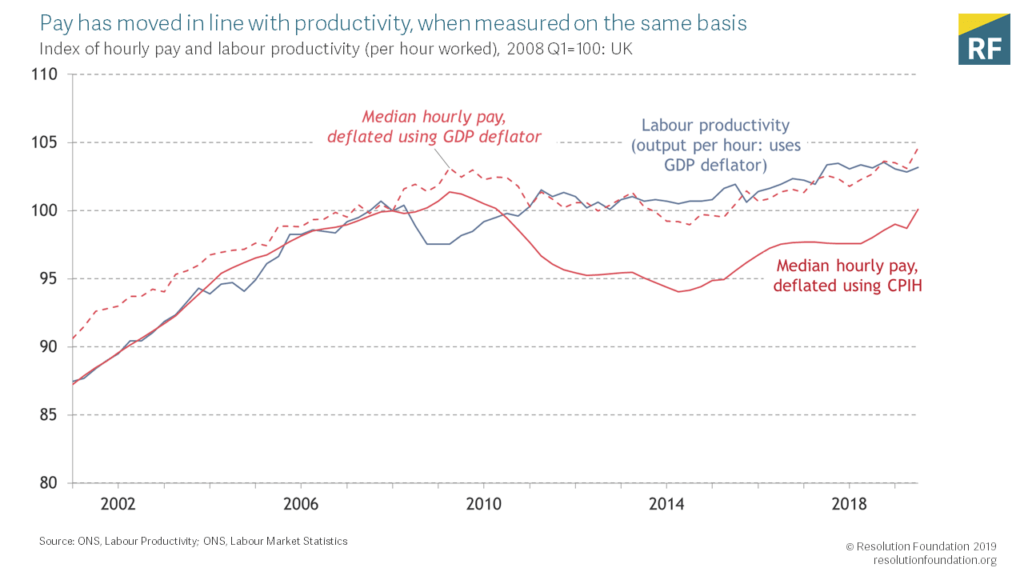 So, for pay to continue growing at its current rate requires an end to flatlining productivity. Importantly this is a two-way street – pay growth putting pressure on profits is one driver of the investment and productivity growth that make that pay growth sustainable.

This is why maintaining full employment is so crucial, and the good news is that even if we see a slight retreat from record employment, our labour market will remain tight by historical standards. This will continue to drive pay pressure – which might explain why the Bank of England recently revised up its expectations of nominal pay growth in 2020 to 3.75 per cent.

The future is an uncertain land, but our best guess is that 2020 will be very different from the last few years. We may well see a welcome return to record pay levels, but a less welcome retreat from record employment.

That would, at least, mark a return to pre-crisis normality for the labour market. But rather than being overly reassured by that fact policy makers should be focused on the underlying problem – an economy growing slowly because businesses aren’t investing. This received next to zero discussion during the election campaign, but putting it centre stage should be a new year’s resolution for all of us.