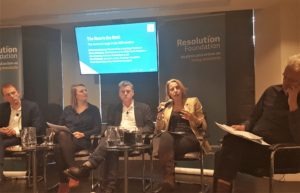 From its controversial introduction in 1999 amid warnings of job losses, the National Minimum Wage has flourished, and since 2016 has been turbo-charged by the National Living Wage. Both main parties now want to go even further. The Conservatives want to raise the UK’s legal wage floor to a level that ends low pay, while Labour want to turn it into a real Living Wage for all workers aged 16+, so that it reflects the cost of living. Either way, the UK is set for one of the highest wage floors in the world.

How different are the main parties’ plans for the minimum wage? Do they risk setting the wage floor at too high a level that causes job losses? And how can they match welcome ambition with an evidence-based approach that has served the UK so well over the past 20 years?

At an event at its Westminster offices, the Resolution Foundation presented new analysis of the two main parties’ plans for the minimum wage, including how they compare with each other, with other countries, and how they might affect firms and workers across the UK. A panel of experts debated key questions about the future of the minimum wage, followed by an audience Q&A.