This winter, low-income households will have to reduce their spending by three times as much as high-income households in order to afford their energy bills, according to a new Resolution Foundation briefing released today (Sunday) – which focuses on how bills in Jan-March 2023 are now set to be an annualised £4,266, rather than the £2,800 expected earlier this year.

Poorer households, in the lowest quintile of the income distribution, will have to cut back almost 1 in £4 (24 per cent) of “non-essential” spending in order to be able to put on the heating, pay the rent, and afford food, transport and communication in January-March 2023, the Foundation finds – with a typical low-income household paying by Direct Debit now expected to need an extra £418 to pay their energy bills over the first three months of next year than was expected back in May 2022.

In contrast, the richest tenth of households will only have to cut back 1 in £12 (8 per cent) of their non-essential spending in order to accommodate the higher heating bills, reflecting the fact that gas and electricity expenditure make up a much smaller proportion of their total outgoings.

In May 2022, the Government announced a £15 billion package of energy bill support. At that time, gas and electricity bills for a typical household were expected to rise to about £2,800 a year from October. New forecasts (from Cornwall Insights) have since suggested that the energy price cap could reach £3,582 a year for a typical household from October, and £4,266 a year from January 2023 – making it clear that more support is urgently needed.

Figure 1: Low-income households will have to cut back on three-times as much spending to be able to afford higher energy bills 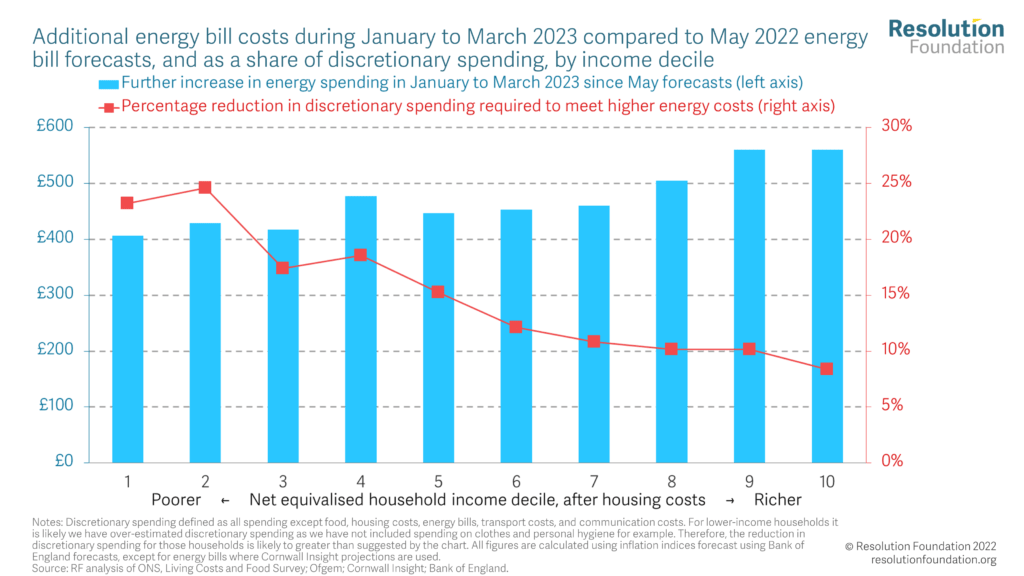 A key point, too, the Foundation says, is that the imminent jump in energy costs are set to coincide with winter, when household demand increases substantially. Almost half of annual household gas costs come from usage between January-March when temperatures are coldest, with the type of housing people live in set to play a big part in just how much their costs soar. This is particularly relevant for those on pre-payment meters, for whom energy costs are not smoothed out over the year.

Come January, families in energy-inefficient homes will be facing monthly gas bills £231 higher than those who live in equivalent homes that already meet the Government’s efficiency target (EPC C). Over the 2022-23 winter period, this penalty adds up to £849, an average of £141 per month.

Figure 2: Families in energy-inefficient homes will have significantly higher bills than those in better-insulated housing 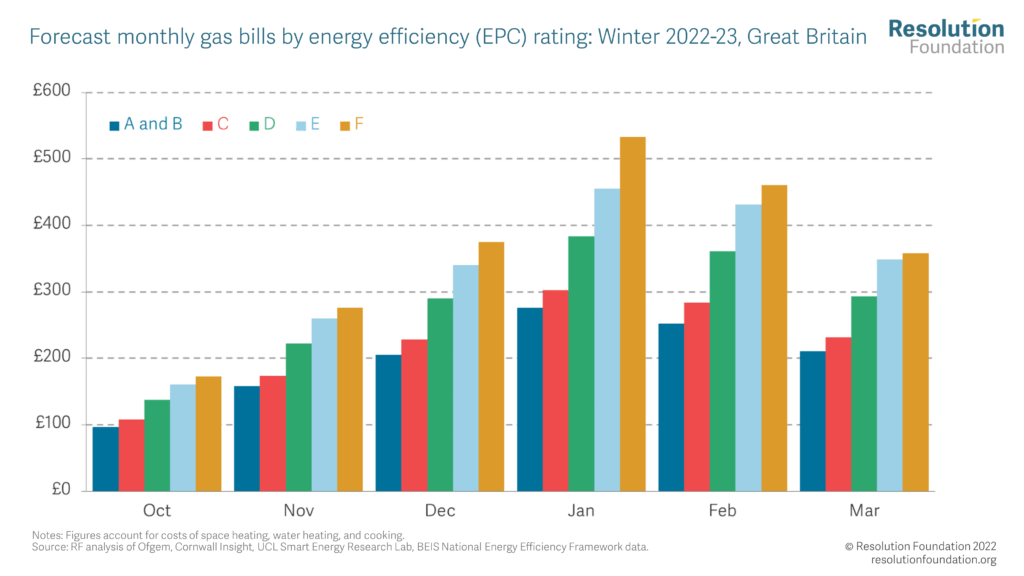 High gas costs will inevitably lead people to cut back, with a real risk of families sitting in the cold this winter. Breaking gas bills down into individual activities, the Foundation calculates that the daily cost of turning the (gas) heating on will be £7.34 this winter, even for families in energy efficient (EPC C) homes. For those in badly insulated homes this figure rises by more than half (58 per cent) to £11.60 per day. In the last pre-Covid winter, there were 28,300 excess winter deaths in England and Wales, with WHO estimates implying that around 8,500 of these can be attributed to cold homes. By January 2023, the unit price of gas is set to be four times what it was in winter 2019.

Figure 3: Keeping warm this winter will cost a lot more for families in badly insulated homes 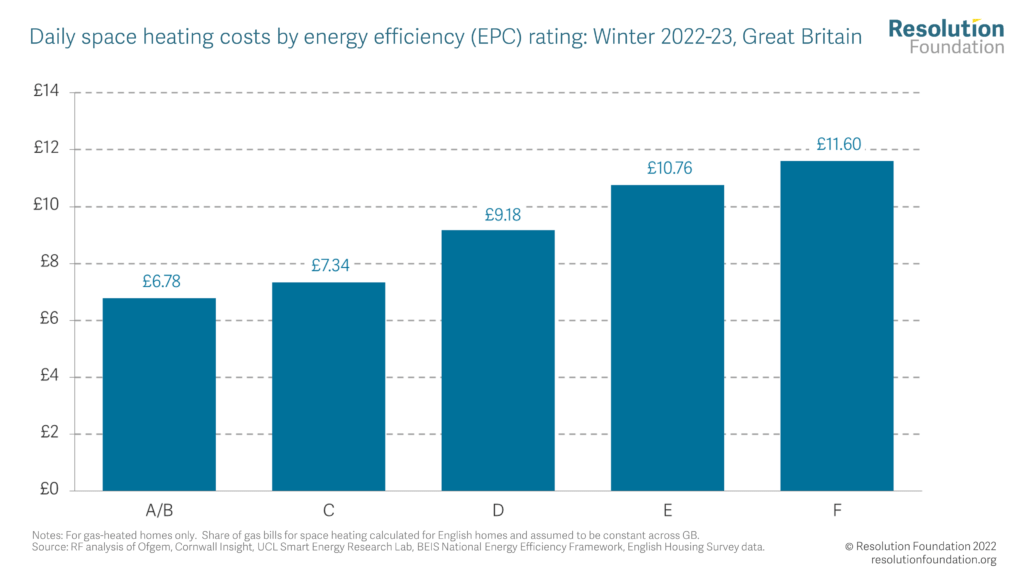 This is particularly important, the Foundation says, because almost half (49 per cent) of the poorest fifth of households live in homes with uninsulated walls. Although this level is largely consistent across the income spectrum, the financial consequences of living in energy-inefficient homes will hit lower-income families hardest (and, as previously shown, force them to cut back on a higher proportion of their overall spending). Had Government support to insulate homes not been cut a decade ago, millions of families would be paying hundreds of pounds less for energy this winter.

With households already facing difficult budgeting decisions, the Government will need to act quickly if it is to put in place the support that will be needed this winter, as well as accelerating changes in how we produce and consume energy so households are less exposed to price shocks.

“With the support package announced in May now clearly hundreds of pounds per household short of what will be needed, and households already facing difficult budgeting decisions, the Government will need to act swiftly to put in place the necessary energy bill support this winter.

“Helping the lowest-income households, who will be hit hardest by soaring energy bills – and forced to cut back their expenditure by almost three times as much as the richest households – remains the core priority.

“But preventing families on middle incomes from falling behind on unaffordable energy bills should also be an important part of any new strategy.

“Longer-term, the fact that families in energy-inefficient housing will be facing some of the most severe rises also highlights the need to source cheaper energy, by rolling out low cost renewables, and for a drive to properly insulate the UK’s homes.”