As winter approaches, millions of British households will be facing growing financial pressure. The combination of falling incomes, as the Covid-19 support schemes end, and rising inflation, driven by higher energy costs, means family budgets will be squeezed from all sides.

The impacts of soaring global gas markets on the energy bills of millions of families are already clear to see, with the price cap rising by 12 per cent on 1 October, the highest amount since the policy began. Some analysts now forecast that next April will see bills at more than £1,650 per household, a near-50 per cent rise on average bills in 2020. This increase will disproportionately impact lower-income households, who spend three times as much of their household budgets on energy as the richest families. If prices reach this level, it would see gas and electricity spend account for more than a tenth of the budgets of the least well-off families.

One response from Government would be to reinstate the £20 uplift in Universal Credit. But there are other policy levers available, including modifying the Warm Homes Discount and Cold Weather Payment schemes to expand eligibility and increase generosity.  Other approaches include extending Winter Fuel Payments to low-income working-age households, or even temporarily reducing VAT on domestic energy bills, although this would be very poorly targeted.

The impact of higher energy prices will be felt most strongly in the least energy-efficient homes. Decisions in the early 2010s to (allegedly) “cut the green crap” significantly slowed down the rate at which homes were being insulated, and this makes it all the more important that the imminent Heat and Buildings Strategy has a clear plan to insulate tens of millions of properties. In the longer-term, efforts to reduce our dependence on natural gas will both help our progress to net zero and minimise our exposure to volatile gas markets.

The UK is diving head-first into a cost of living crisis. Falling incomes at the same time as increasing living costs is putting a squeeze on household budgets, potentially stymying the recovery from Covid-19.

One of the great successes of the pandemic was in how government support schemes ensured that household incomes were resilient, on average, during what was the largest recession in at least a century. But the decision to end the £20 Universal Credit uplift at the start of this month comes at a time when inflation is rising, potentially topping 4 per cent by the end of the year. Higher energy costs are a direct driver of this inflation rise, and these costs look set to rise further: current wholesale gas futures contracts are trading at around more than £2.50 per therm for Q1 2022 delivery and upward of £1 per therm for delivery over summer 2022, compared to the 67 pence per therm used in Bank of England inflation forecast calculations.[1]

There are several things that the Government can do to alleviate some of the pain of higher energy prices. Before enacting any of these, however, it is vital to understand where, how and when these additional costs will fall.

From October 1 2021, households on a standard variable tariff saw their energy bills increase by £139 to £1,277 per year, having already increased by £79 when the price cap was raised earlier in 2021. Forecasts of the next amendment to the price cap – announced in February to come into effect in April 2022 – could see average gas and electricity bills increase to more than £1,650 per year, the highest level under the price cap and an increase of 50 per cent on the average cost during 2020.

For the poorest tenth, this would see the share of household expenditure used to pay for energy top 10 per cent, surpassing that spent on transport or clothing and footwear (see Figure 1). For the richest households, the price cap would see electricity and gas costs take up just 3.6 per cent of household budgets.

Annual household expenditure, and proportion of equivalised expenditure, on gas and electricity in 2020 and under estimates for the April 2022 energy price cap 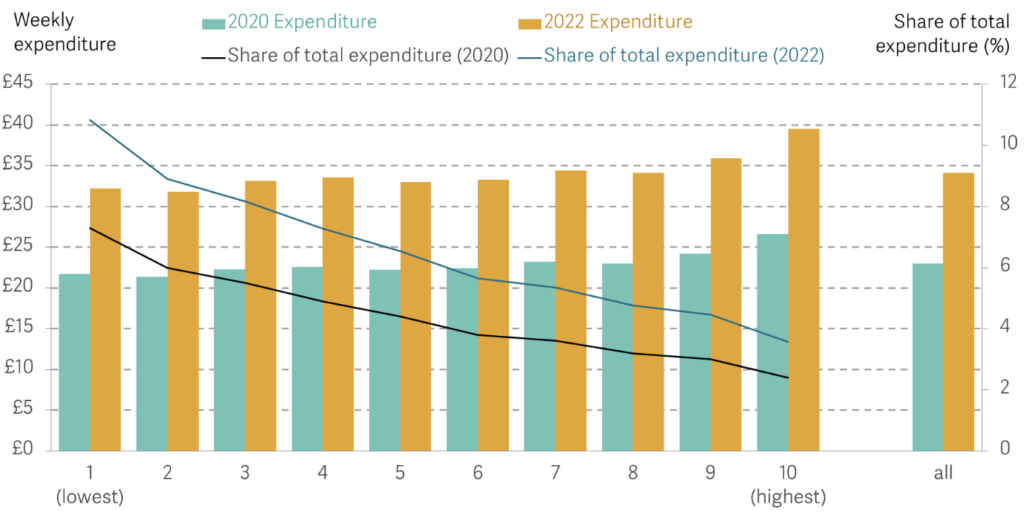 Measures to alleviate the cost of living crunch come in two flavours: those that increase incomes and those that reduce costs.  Reinstating the £20 per week Universal Credit (UC) uplift –  thereby undoing what was the largest overnight benefits cut in history, cutting incomes of 4.4 million households by an average of over 5 per cent – would be the ideal solution.

Energy bills are a function of both price (controlled by the price cap) and of the volume of energy used. Lower-income households, more likely to be in flats and smaller houses, generally consume less energy than those higher up the income distribution – average consumption in the top three income deciles is 28 per cent higher than the bottom three – but there are other, more significant, causes of disparity. In particular, soaring energy costs are throwing the poor energy performance of Britain’s housing stock into sharp relief. Recent analysis found that the October price cap increase would see gas bills of an EPC D-rated home increase by an extra £107 per year compared with an equivalent EPC C-rated property.

The Government has a target, introduced in the 2017 Clean Growth Strategy, of improving the energy efficiency of as many homes in England as practically possible to an EPC rating of C by 2035; currently, only 40 per cent of homes currently meet this goal.  Such is the number of inefficient homes that there is little variation in energy efficiency across the income distribution. However, in the early 2010s, a lower-income household was more likely to live in a more efficient home than a family at the top of the income distribution, yet by 2019 this situation had reversed. Despite policy efforts largely focussed at lower-income homes, they are now marginally more likely to live in more wasteful homes, with bills higher than they need to be.

But it is housing tenure where energy efficiency disparity becomes the starkest. Lower-income families are most likely to live in local authority, housing authority or private rented sector (PRS) homes. The proportion of EPC C or higher-rated homes in the PRS is just 32 per cent, close to half of the level in housing association properties, which is worrying given that households in the PRS category increased by nearly two-thirds between 2007 and 2018. Without a significant uptick in both incentives and penalties to encourage landlords to improve their properties, the financial squeeze on renters from high energy prices will continue. 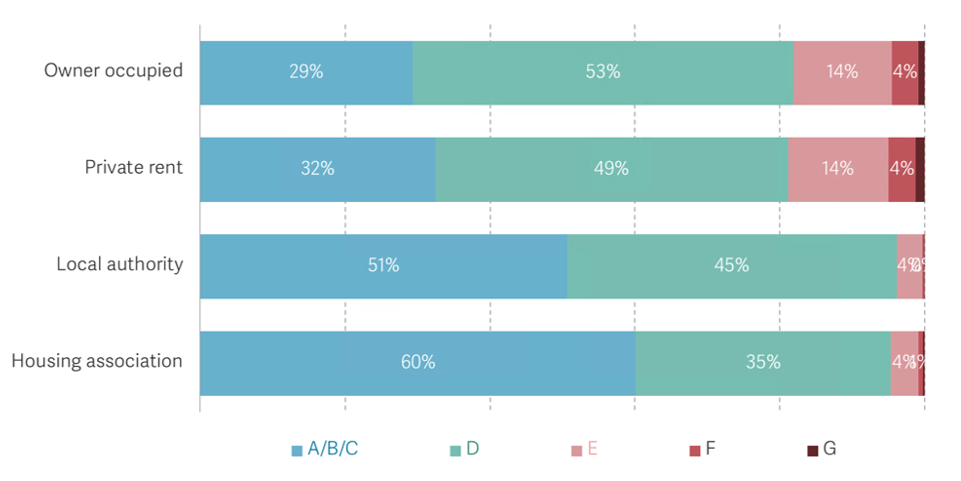 The main efficiency gap in the private rented sector concerns insulating walls: 37 per cent of PRS homes have uninsulated walls, compared with 24 per cent of owner-occupied properties and just 9 per cent of housing association homes.[3] From 2009 to 2014, government-supported schemes led to an average of 410,000 cavity walls being insulated in England every year; after cuts to various government-supported schemes, this fell to just 155,000 per year from 2015 to 2019. Similarly, the number of lofts insulated fell from more than 1.1 million per year from 2009 to 2014 to just 54,000 a year in the five years afterwards, reaching a low of just 25,700 households in 2019.

This decision is having a clear impact on household bills today; of all heat wasted from a home, around a third escapes through walls and a third through the roof. Energy Saving Trust estimates show that insulating a loft can save up to £250 from annual energy costs, while cavity wall insulation can bring down bills by as much as £280. The current Government’s imminent Heat and Buildings Strategy presents an ideal opportunity to put this right.

In the long-term, it would be prudent to enact policies that both reduce consumption and limit fuel price volatility

The most obvious means of insulating Britain from energy shocks is to curb energy demand and reduce dependency on imported fossil fuels. The Government has set a number of targets that will work toward these goals – improving building efficiency, rolling out heat pumps, decarbonising the power grid – but it is has been slower to announce the specific policies to deliver these. For example, the vast majority of the £9.2 billion public funding promised for building efficiency upgrades in the 2019 Conservative Party manifesto is yet to be seen, and the recent Green Homes Grant scheme failed to live up to its promise: it is currently on track to improve just 47,500 homes and cost the taxpayer £314 million.

The Climate Change Committee’s Balanced Pathway assumes a £39 billion spend on building fabric upgrades over the decade 2022-2031. Not all of this will fall to the state – the OBR’s central forecast assumes that 56 per cent of the total cost of building decarbonisation is met by property owners – but the remainder is still well in excess of the amount of funding pledged before the last election.  Boosting the ambition to deliver this, with a particular focus on achieving the interim 2025 fuel poverty ‘Band D’ target and, within that, on lower-income households (perhaps by bolstering the Home Upgrades Grant and Social Housing Decarbonisation Fund schemes) would go some way to insulating lower-income households from future energy price spikes as well as reducing overall energy expenditure.

The move to clean heat will also require a cheap – and stable – source of zero carbon electricity. The Government recently set a target for a zero-emissions power grid by 2035, and will hold an auction for renewable support contracts this winter that is expected to approve most capacity that currently has planning permission, including a welcome return of backing for onshore wind and solar generation.  Continuing these ambitious renewables auctions, finding a way to fund new nuclear capacity that reduces costs without unnecessary transfer of construction risk to household energy bills, and much-needed progress on improving power system flexibility so it can cope with a largely renewable supply are all vital steps.

These longer-term solutions offer a clear benefit to lower-income households and will help work towards the Government’s net zero ambitions. But they will not help lower-income households this winter (for example, renewable capacity contracted through auctions this winter will not start generating until mid-way through this decade). The best option to help low-income households to deal with higher energy costs would have been to not remove the uplift to Universal Credit. In the wake of this decision, it is likely that one or more of the proposals described above will be necessary to support households through what could be a ‘winter of discontent’.

[1] Futures price data from the Intercontinental Exchange, prices correct as of 14th October 2021.

[2] RF estimates based on the number of working-age households on means-tested benefits prior to the Covid-19 Pandemic. For more detail on the latter see: K. Handscomb and L. Try, Age-old or new age? Resolution Foundation, August 2021.