Since we last produced an Earnings Outlook (at the end of March) some things have become clearer. The scale of the impact of the current crisis is as big as was feared. This was already apparent then from the soaring claims for Universal Credit, but has since been confirmed by the 300-year-record fall in GDP, the nine million workers who have been furloughed at some point, and the falls in hours worked and vacancies. It’s also now apparent that the crisis will be an enduring one, and that early confidence of a rapid ‘V-shaped’ recovery was misplaced (although of course the initial bounce-back will still be rapid). This can be seen in the latest monthly GDP data (growth in May was only 1.8 per cent, leaving economic activity still 25 per cent down on February). It’s also evident in the Office for Budget Responsibility’s new scenarios, where the new ‘central’ scenario has unemployment reaching a higher peak (12 per cent) and taking longer to fall than in the ‘reference scenario’ published in April.

But in other ways there are still as many questions as answers. A particularly big unknown is – what will happen when the Job Retention Scheme winds down from August, and shuts in November? The risk is that ongoing weakness, particularly in the worst-affected sectors, translates into mass redundancies. How many is hard to gauge, although surveys of workers and firms point to a number in the region of 15 per cent. To minimise redundancies, we suggested ongoing wage subsidies in the hard-hit sectors. The Chancellor has opted for a one-off £1,000 ‘bonus’ for firms re-hiring furloughed workers. In keeping with our judgement of the Government’s overall response in this new phase of the crisis, we don’t think this matches the scale of the challenge, risking a worse downturn and protracted and high unemployment. Let’s hope we are wrong and the Government is right.

Turning away from policy, in another report this week we try to demystify the confusion around current labour market statistics, with the claimant count (soaring) and the unemployment rate (unchanging) telling very different stories. In the Spotlight section of this Outlook we show that different timely data sources on pay are mercifully consistent by comparison, although present their own challenges below the surface.

Spotlight: What we know about how employee earnings have fared in the current crisis

Economic crises pose huge challenges to families and policy makers. They also pose challenges for those who publish and interpret economic statistics. As a new briefing note published today by the Resolution Foundation sets out, this is the case in this crisis, particularly when it comes to measures of unemployment.

In the Office for National Statistics’ (ONS’) June labour market statistics release, the unemployment rate for April hardly budged from that in the previous month, and yet the Claimant Count measure of unemployment increased by a record monthly change of one million. We argue that particular features of the crisis mean that both of these are flawed. The Claimant Count is affected by definitional changes stemming from the roll-out of Universal Credit, which has been sped up by this crisis. And both the Claimant Count and the unemployment rate are struggling to accurately capture what’s going on in the presence of severe restrictions on activity, a collapse in vacancies, and the Coronavirus Job Retention Scheme (JRS) and Self-Employment Income Support Scheme.

Alongside these measures of labour market status, the ONS’ labour market release now contains two sources of data on employee earnings. It’s right to ask whether there are any issues with contradiction or consistency there, too.

The good news is, on the surface, all appears to be well. As Figure 1 shows, both the survey-based Average Weekly Earnings (AWE) data, and the administrative Pay As You Earn (PAYE) real-time data from HM Revenue and Customs, show nominal annual earnings growth falling from 3-4 per cent in the early months of this year, to around 0 per cent in April. (The timelier ‘flash’ estimate suggests that nominal earnings growth fell to around -2 per cent in May.) The bad news, of course, is that this is a terrible outcome for family living standards, and a picture that looks like it will worsen before getting better.

Figure 1: Our timely sources of pay data are painting a consistent picture at present 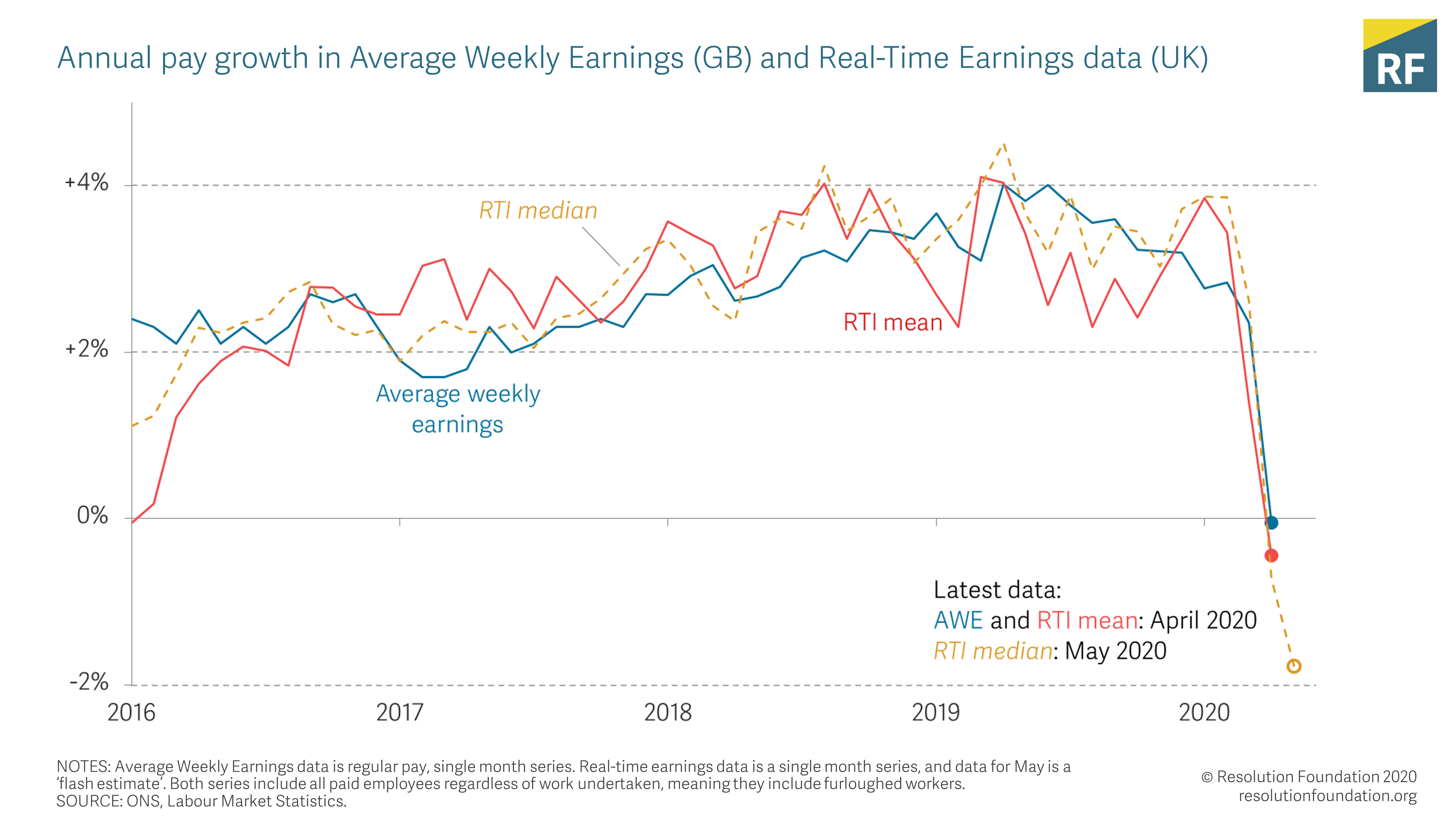 However, although these two sources of data are telling a consistent headline story, there are challenges beneath the surface. We highlight two.

First, both of these statistics are affected not just by changes to individuals’ earnings, but also by ‘compositional’ movements in and out of (paid) work. Such compositional effects are always an issue for average earnings data – which is why we provide an earnings decomposition in every Earnings Outlook, and why the ONS produces an AWE

Second, both these earnings series include furlough pay for those on the JRS, which will be lower than pre-crisis pay for some (many employers are topping up the government subsidy). We know that furloughing, like hours reductions, is concentrated among lower earners, and it is likely to be the combined impact of these outcomes that is leading to pay at the bottom of the distribution being worst hit so far (as shown in Figure 2 using slightly less timely three-month data).

Figure 2: Pay is falling fastest at the bottom of the distribution 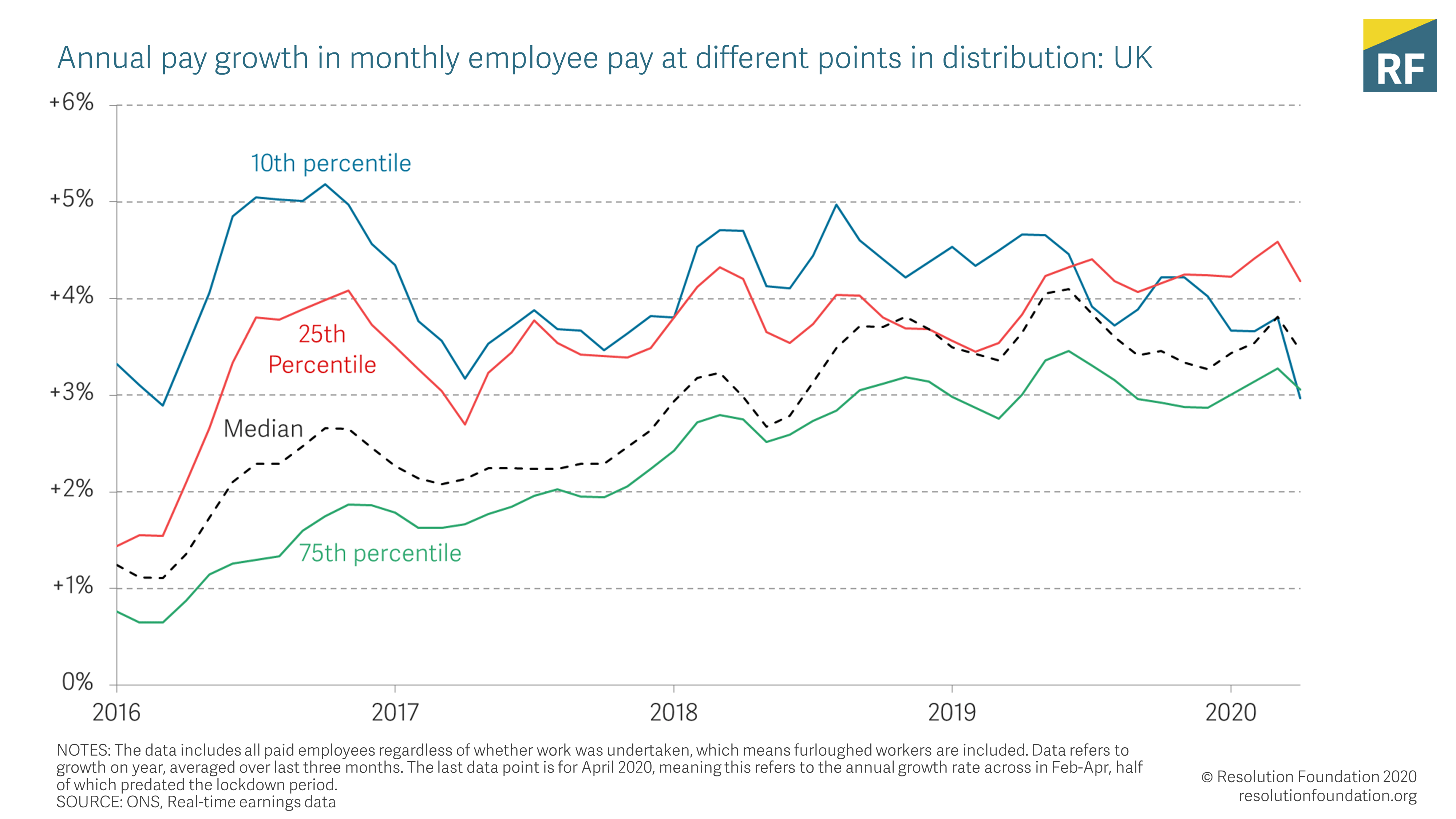 Of course, it is reasonable that furlough pay is counted within these earnings series – furloughed workers are paid by their employers as normal – but the fact that we cannot separate out this group from the rest makes it challenging to determine the underlying health of the labour market. This matters for economic research, and it also matters for policy.  For example, the presence of furlough pay in our earnings series will create challenges for the Low Pay Commission in determining what the appropriate minimum wages levels are for next year. And, as we have set out before, the fall-then-rise in the AWE series that furloughing causes will turbo-charge the ‘triple lock’ ratchet on the State Pension in coming years.

In sum, although earnings data is not currently creating the kind of headaches that the unemployment data is, there are some tricky moving parts below the surface. In response to these, the ONS and other researchers should explore the extent to which earnings growth can be ‘decomposed’ to account for compositional shifts in and out of work, and whether furloughed employees can be separated. For the latter to be possible, we would need to be able to identify furloughed workers in these series (or perhaps in the Labour Force Survey, which captures earnings for a subset of the sample on a slightly less timely basis than the earnings sources discussed here), and that is something the ONS should explore. In the meantime, careful interpretation of the data we do have – and in particular the differences between higher and lower earners – will be required, particularly as the JRS is withdrawn in the autumn.